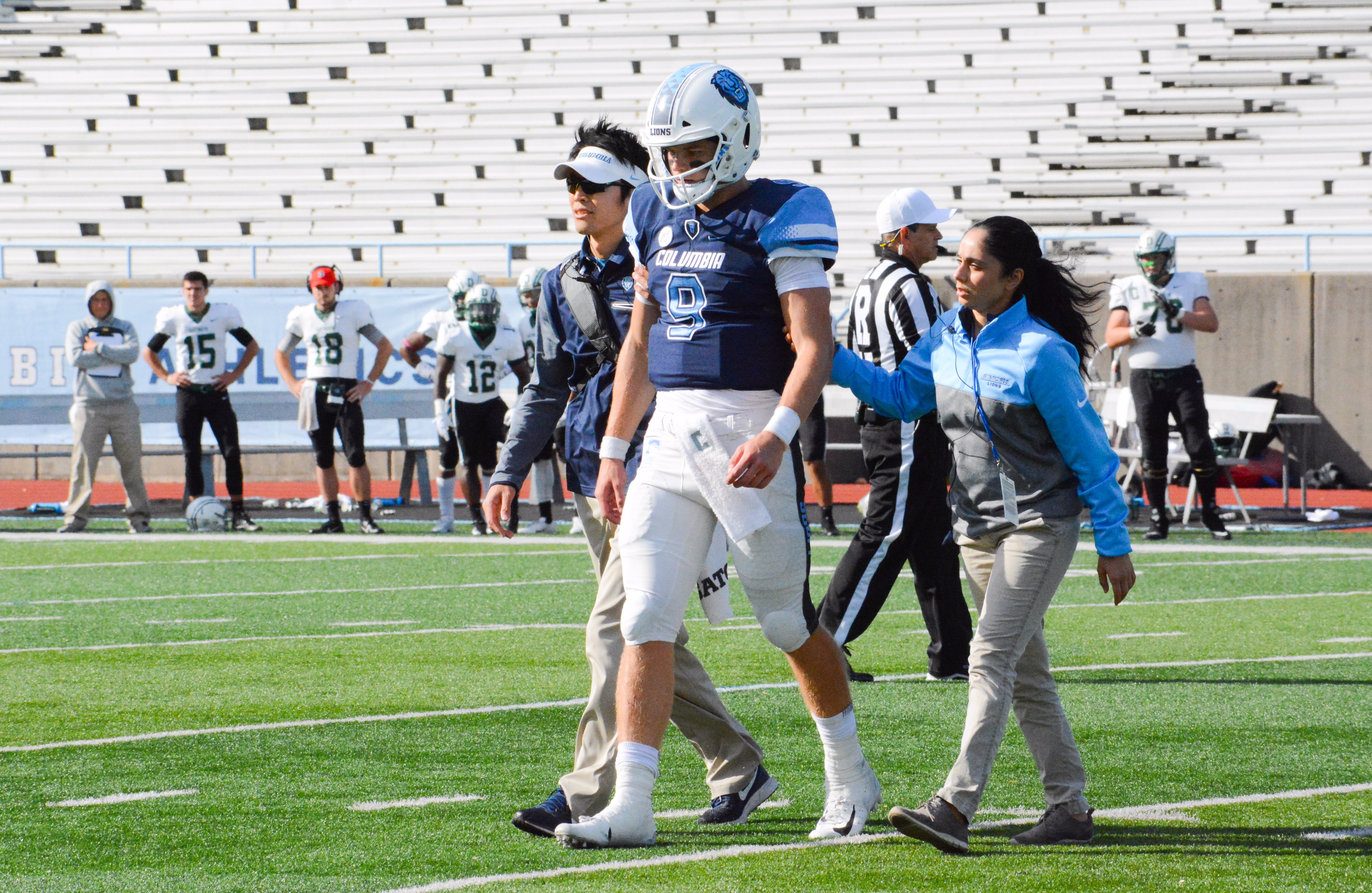 Sophomore quarterback Josh Bean left the game today with an undisclosed head injury. He was one of nine players injured in the 28-12 loss.

NEW YORK—The clock stopped with three minutes and 25 seconds remaining in the second quarter. First-year running back Dante Miller sprawled out across the 40-yard line, writhing.

Moments earlier, he had powered his way up the middle, fought through the line of scrimmage and delivered Columbia—only down 7-6 at that point—another much-needed first-down.

Through the first quarters of the 28-12 loss, the Lions—who entered the game as 15-point underdogs—looked capable of competing. Their defense still struggled against the run and their offense failed to convert in the red zone, but they stayed in it all the same against a team currently tied for first place in the Ivy League.

And then Miller ran, but he was tackled down and remained down. As he was carried off the field by his teammates, head coach Al Bagnoli hung his head and walked slowly back to the sideline. For a team already decimated by injuries, this seemed almost too much to bear. After the game, Bagnoli noted that Miller suffered a broken left leg and would need surgery.

Two plays later, sophomore quarterback Josh Bean stepped forward and ran 6 yards to earn the Lions another first-down, getting them ever closer to taking the lead. Only he too was hit—this time on the head—and remained on the ground long after everyone else had gotten up.

Bean eventually rose in a daze and was led to the medical tent as Bagnoli swung his clipboard at his side, and looked up, seemingly at nothing, before walking back to his position on the sideline, surveying his crippled team.

The crowd of 12,506—the fourth-largest audience in the history of Wien Stadium—was in disbelief. Bean, held out for precautionary reasons, would not return to action, according to a sullen Bagnoli after the game.

Even Dartmouth head coach Buddy Teevens was in disbelief after the game, noting that he had never seen a team suffer so many injuries. Of course, these casualties hampered an already battered Columbia squad and worked to the advantage of the Big Green.

“It’s been one thing after another this entire year,” Bagnoli said. “Today was just an extension of everything that’s been happening to us. But through it all our kids have done an unbelievable job of staying focused and being resilient and just playing and I couldn’t be prouder.”

Against Dartmouth (6-0, 3-0 Ivy), the Lions (3-3, 0-3 Ivy) lost what remained of its offense to injury. First, it was Miller. Then, Bean. Later, first-year quarterback Ty Lenhart, the third-string quarterback on the depth chart, was knocked to the ground immediately after throwing a beautiful 48-yard bomb to Pitts and eventually led off. The Lions’ new leader would be senior Ryan Suitt, who did not take a single snap in practice this week, per Bagnoli.

“We just have a standard here—it’s a next man up mentality, and that’s what we have to be,” Suitt said. “If someone else who’s breaking his leg out there for you trying to help you win, it’s hard to go not come in and not be prepared and not be ready to go fight for them too.”

For the first half, the Lions looked capable of taking on Dartmouth’s offensive and defensive versatility. The defense held the Big Green to just 110 yards and one score, while the Columbia offense put up 153 yards, evenly distributed between the ground and the air.

Had they executed just a bit better when it counted, they could have gone into the locker room at half up 14-7. Had Bean or Miller not been injured, it could have been 21-7, and the Lions could have toppled Dartmouth for the second year in a row.

Instead Columbia was soundly defeated. It played its fourth-string quarterback for most of the fourth quarter, and the defense could only do so much.

Over the course of the game, Dartmouth pounded the Lions’ defensive efforts into the ground, to the tune of over 200 yards rushing split evenly between two running backs, two quarterbacks, and a wide receiver. This was alongside a concise but significant 106 passing yards.

“We knew that they were big strong physical team and that this wasn’t gonna end at the end of the first half or the end of the third quarter,” Bagnoli said. “They’re just gonna try to keep pounding.”

Perhaps the most noticeable aspect of the Big Green’s offensive performance was the speed with which the team scored. Dartmouth forced the ball down the Columbia’s throat drive after drive. Its three scoring drives lasted five minutes, three minutes, and eight seconds respectively. By midway through the third quarter, the Lions’ defense, already lacking in lateral speed, looked sluggish, frustrated, and fatigued.

Dartmouth came into the game with a clear understanding of Columbia’s weaknesses on defense. In the first quarter, it didn’t bother to pass the ball. Instead, it stuck to mobile quarterback play and a varied defensive attack, things which the Lions have struggled the most.

The Lions’ run game remained stagnant, as it has for most of the season. Continuing its reliance on the aptitude of their quarterbacks, Columbia passed the ball over 30 times, as they have in every game thus far this season.

The result, for the most part, was impressive. Bean completed roughly 60 percent of his passes and Lenhart finished with a 129.6 passer rating out of a possible 158.3. Even senior wide receiver Kyle Castner registered a completion.

“I feel bad for [Bean]. I think he’s got the potential to be exceptional,” Bagnoli said. “We just can’t seem to get him extended long enough to get him comfortable. Something [always] seems to happen.”

But there’s only so much that can be done through the air with a fourth-string quarterback. With Bean and Lenhart injured in-game, and sophomore quarterback Dillon Davis battling a shoulder issue, Columbia resorted to Suitt, who, on his first pass of the game, threw an interception.

Meanwhile, Dartmouth passed sparingly but to great effect. They completed over 90 percent of their pass attempts between three different passers. Their starting quarterback Derek Kyler went a perfect 9-for-9 with one touchdown, while also catching a touchdown from wide receiver Drew Hunnicutt.

The homecoming game was undoubtedly a disappointment, but for all the wrong reasons. A constant stream of uncontrollable deflations left this team hobbled by the time the clock wound down.

The Lions now sit steady toward the bottom of the Ivy League standings, alongside teams like Brown and Penn. Yet while those teams’ underperformance can be accounted for with a lack of talent or poor play or planning, Columbia is where it is due, in large part, to injury.

As they prepare to play Yale next weekend, the Lions can only focus on keeping their remaining players healthy and safe.

That game will kick off next Saturday at Wien Stadium at 1 p.m.