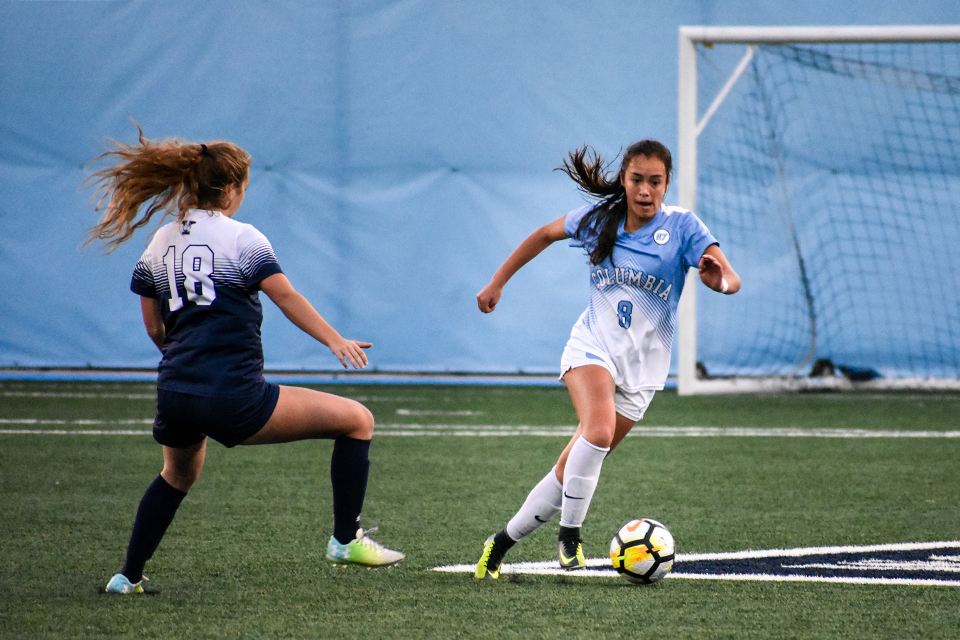 A packed Rocco B. Commisso Stadium erupted in cheers Saturday night when first-year midfielder Jessica Schildkraut delivered a long strike past the Dartmouth keeper. In the 37th minute of the game, Columbia took a 1-0 lead that it would maintain for the rest of the game to beat Dartmouth.

The goal came as a relief to the Lions (7-6-1, 3-2-0 Ivy), who were shut out in both of their last two Ivy League matchups. Columbia has struggled to find the back of the net all season, despite tallying 92 shots on goal, the second highest number in the Ivy League.

That changed in this weekend’s Homecoming and Senior Night match against Dartmouth (8-5-2, 2-2-1 Ivy). The Lions approached the game with a new mentality, seeking to bring a more consistent level of energy to their play during games, according to head coach Tracey Bartholomew.

“We wanted to play for [a full] 90 minutes,” Bartholomew said. “We had been talking about that nonstop.”

The change in strategy was effective, with the Lions playing an aggressive first half against the Big Green. Columbia put up eight shots in the first half alone and maintained near constant control of possession. In the 37th minute, Schildkraut scored, firing a long shot over the keeper that shocked everyone, including senior forward Emma Anderson who picked up the assist.

“We were all kind of laughing because that shot’s really hard and we’ve missed that all year,” Anderson said. “Everyone was encouraging Jess to take a touch and then suddenly she ripped it in the back of the net. … You saw how much that goal meant to us.”

After heading into the locker room with a 1-0 lead, the Lions maintained their energetic play into the second half. Dartmouth fired back early on in the period, but it was blocked by senior goalkeeper Sophie Whitehouse. While Dartmouth entered the match boasting the highest number of shots on goal per goal scored in the league, the Lions were able to hold the Big Green to just a single shot on goal.

Other Lions also had successful nights, including Anderson, junior forward Emily Koe, first year forward Mallaika Tomar, and senior forward Rachel Alexander, who each collected multiple shots. Despite these efforts, however, the Lions were unable to find the back of the net for a second time.

Next weekend, the Lions will face Yale in New Haven for their second-to-last match of the season. After losing to Yale last year, Anderson is looking for redemption.

“Yale was a tough game last year,” Anderson said. “We are going to play for us and play for redemption from last year.”