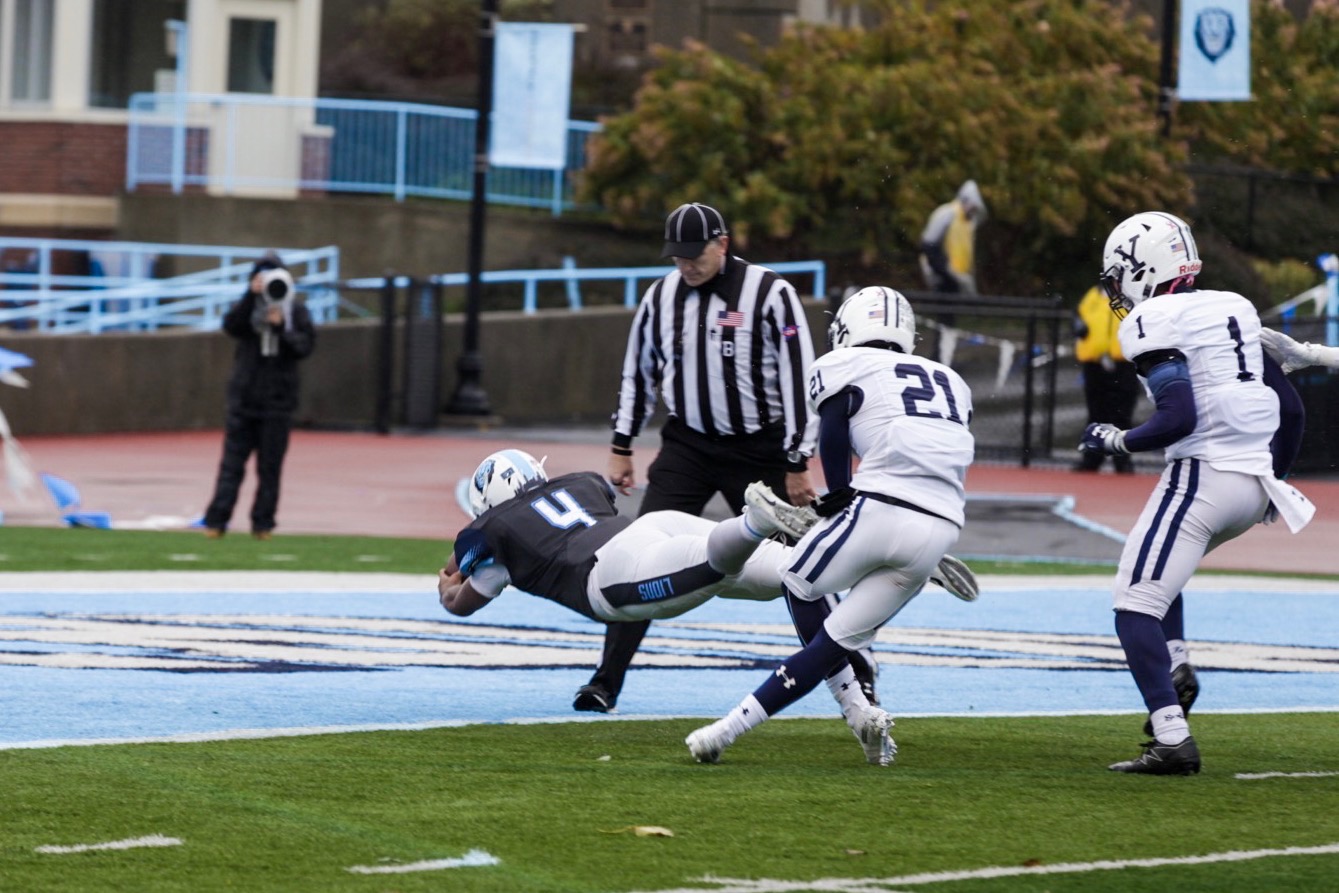 First-year running back Ryan Young—listed fourth on the depth chart to start the season—has emerged as the starter due to a litany of injuries at the position this season.

Football will cap off its season this weekend, looking to ensure a winning record at home against Cornell in the annual Empire State Bowl.

The Lions (5-4, 2-4 Ivy) enter Saturday’s contest following its most uniform victory of the season last weekend, when they defeated Brown 42-20.

Not only was this the Light Blue’s second Ancient Eight win in its last three games, but it also featured a career-high performance from senior wide receiver Kyle Castner.

The Indianapolis native functioned as a triple threat, passing for 27 yards, rushing for 88, and hauling in four catches for 48. He finished with five total touchdowns, making his the most dominant offensive performance of any individual player this season.

Along with Castner, first-year quarterback Ty Lenhart gave the best performance of any Columbia quarterback this year. Looking comfortable in the pocket, he completed 28 of his 42 pass attempts for 298 yards in his second-ever collegiate start.

His yardage exceeded that of any Lion since Anders Hill, CC ’18, registered the same amount in last year’s matchup against Dartmouth.

Lenhart is one of six Columbia quarterbacks to take the field this year due to an inordinate amount of injuries.

“I was scared to put this much pressure on a freshman quarterback so we had to increase [Castner’s] package” head coach Al Bagnoli said. “There was no argument. We moved forward.”

Two weeks removed from his breakout performance against Yale, first-year Ryan Young returned to form against Brown, rushing 21 times for 79 yards and a score.

He collected 44 yards receiving and a touchdown through the air. With these contributions, Young more than filled in for the injured tandem of junior Lynnard Rose and first-year Dante Miller, both of whom were in front of Young on the depth chart at the start of the year.

“We would have never foreseen [Young] to get this much action,” Bagnoli said. “From where he started to where he is now, none of us saw it happening.”

Although the offense made headlines following the game, it was the Light Blue defense that helped guarantee a Columbia victory.

Barring three scoring plays that comprised 218 yards, the Bears could only muster a measly 36 total yards on offense. The Lions registered 10 sacks, more than they had accumulated last season in total.

In last year’s game against the Big Red, the Lions secured a hard-earned 18-8 victory in Ithaca . The Light Blue entered the game after dropping its previous two games—its only two losses of the season—and grinded out a much-needed victory against a generally inferior Cornell team.

Despite stagnating in the standings as the season has progressed, the Light Blue has overcome several obstacles to remain competitive in the Ivy League this season.

Key injuries across the team hampered a squad that came into the season with title aspirations. Now, a potential top-half finish feels like more than enough.

With a win against Cornell, Columbia could leapfrog the Big Red and the loser of the Harvard-Yale bowl, ensuring, at worst, a fourth-place finish.

“The greatest thing we’ve had is flexibility, not being so hard-headed to do things that we have always done,” Bagnoli said. “It has not been that easy—it’s been draining.”

Kickoff is slated for 1 p.m. at Robert K. Kraft Field at Lawrence A. Wien Stadium.