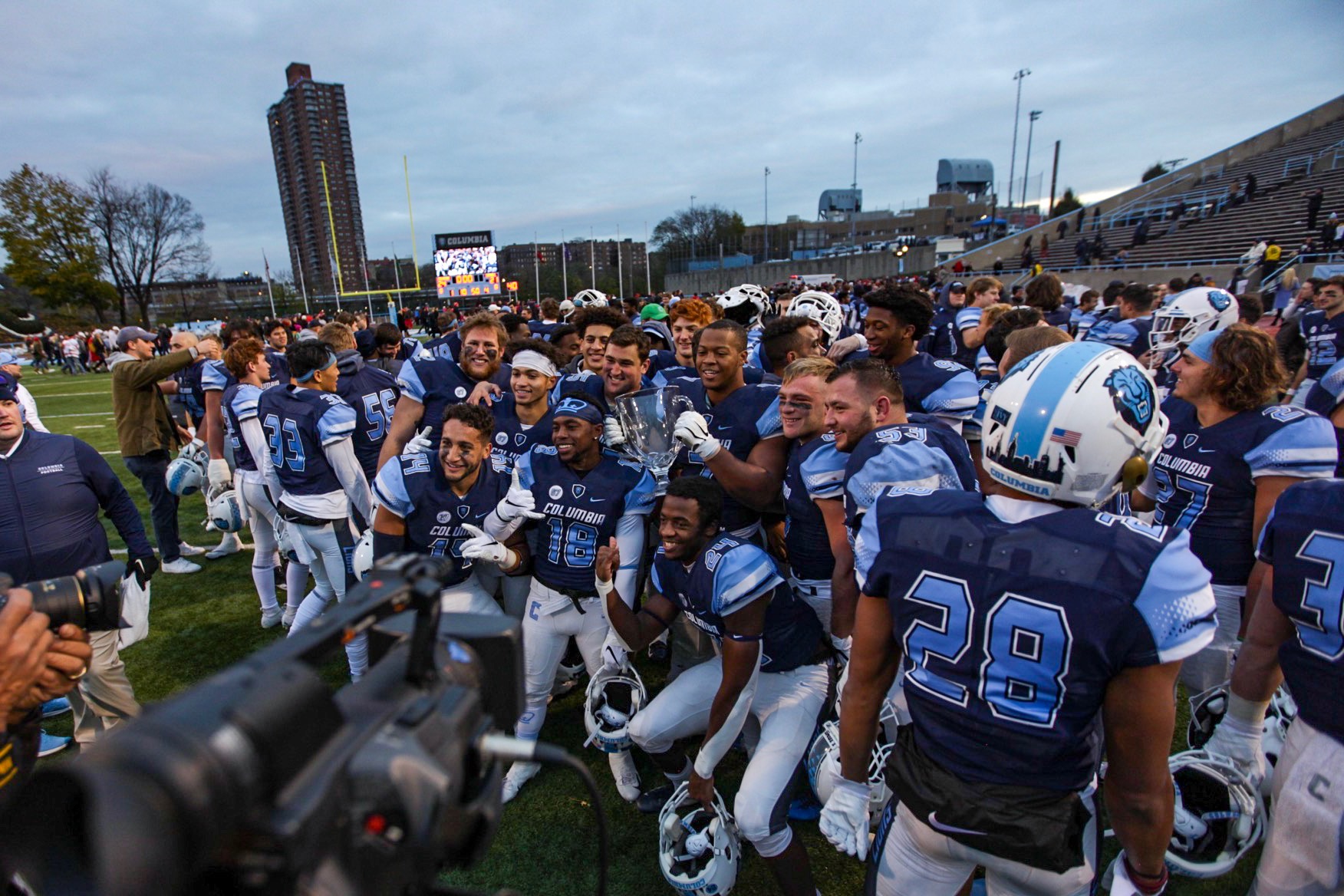 With their 24-21 victory over Cornell, the Lions secured their first back-to-back winning seasons in over fifty years.

Early on in the first quarter, he stood, knees bent, ready to receive a punt. The ball landed comfortably in his hands at Columbia’s nine yard-line. He took a moment at most to survey the field—his blockers and the Cornell defenders—and started running. He didn’t stop until he crossed the threshold of the opposing end zone, giving the Lions their largest lead of the game: 10-0.

With under a minute remaining in the fourth quarter, the Light Blue appeared hopeless. The offense had struggled to parse together drives throughout the game and Cornell had just completed its third scoring drive: a one minute, fifty-two second burst of energetic play that ended with a touchdown. 21-17, Cornell.

Once again, Roussos readied himself. The Lions’ starting field position on that final drive would likely determine whether or not they had a chance.

The squib kicked bounced up the center of the field. Roussos scooped it at the thirteen, juked and spun his way through a wave of red and white jerseys and somehow emerged untouched on the other end, parading towards the one yard-line and leaping into the end-zone with a flourish. 24-21, Columbia.

“[I] picked up the ball, saw a little small hole and I took it,” Roussos said. “I saw a one on one with the kicker and I just made a move and tried to get into the end zone.”

The sideline erupted. The team mobbed Roussos on the edge of the field and, even as the referees tried to determine whether a foul had been committed, it didn’t seem to matter. The Lions had done the impossible in more ways than one.

With Columbia’s (6-4, 3-4 Ivy) 24-21 win over Cornell (3-7, 2-5 Ivy) in the Empire State Bowl, the Light Blue recorded its second consecutive winning season for the first time since 1962. This ended the longest active drought between winning seasons in college football, according to Stats inc.

“What stats don’t show is how big our hearts are, on and off the field. We love each other so much. We build off of each other offensively and defensively,” senior captain and wide receiver Kyle Castner said. “We love this game so much and we love playing with each other. It’s over now, but it’s an unbelievable way to go out.”

This game was, at its worst, an ugly back-and-forth. Neither quarterback exceeded 7 yards per attempt and neither team managed more than 5 yards per carry on the ground. The scoring came in bursts, with lengthy stretches of time providing no real action beyond both sides accruing yards but failing to execute.

The Columbia offense struggled to get into any kind of rhythm. Coming off of his best performance of the season last weekend against Brown, first-year quarterback Ty Lenhart was stymied by the Big Red defense. He completed less than half of his passes, going 12-for-25 with no touchdowns, two interceptions, and a total of 159 yards through the air.

Lenhart’s difficulties were compounded by a Lions run attack that averaged an abysmal 2.1 yards per carry. First-year running back Ryan Young saw the lion’s share of the responsibilities on the ground, finishing with 79 yards on 23 attempts.

Despite the offensive struggles, the Lions were able to execute on a drive late in the third. Lenhart made a few sharp passes to junior receiver Ronald Smith II and senior wideout Kyle Castner to move the Light Blue into Cornell territory and down into the redzone. From there, the Lions repeated last weekend’s game plan: get the ball to Castner.

Castner lined up at quarterback on the Big Red one yard-line, caught the snap, and crossed over the goal-line with ease.

This moment, in conjunction with sharp special teams play from Roussos and senior kicker Chris Alleyne—who nailed three extra points and a field goal en route to a team-record 75 points on the year for a placekicker—was all the Lions needed to pull out the victory.

“That was about as dramatic a game as i’ve been involved in. I’ve been to a lot of games. It’s an unusual way to win a game,” head coach Al Bagnoli said. “Kudos to our kids for finding a way.”

On the defensive end, Columbia applied pressure early, holding the Big Red to just seven points in the first half and forcing a turnover on an interception by first-year cornerback Fara’ad McCombs. Likewise, the Light Blue defense registered three sacks for a total of eighteen lost yards and 13 recorded passes broken up.

Columbia was hardly perfect on defense, allowing Cornell to total 460 yards of offense as the Big Red picked apart select holes in the Lions’ defensive scheme. The score remained even, however, due to staunch red zone defense and missed opportunities by the Big Red. This includes two missed field goals—one blocked by sophomore defensive tackle Ogonna Oraedu.

As stated earlier, this marks the end of the winningest two-year stretch in five decades, as the Light Blue have now won 14 games since 2017. When Bagnoli was hired four years ago, the team was caught in the midst of a 21-game losing streak. Throughout his short tenure, he has imbued this feisty Columbia squad with a pride unknown to earlier teams. There is no greater testament to the fact that throughout this season, in which seemingly everything went wrong, the Lions still won.

“My mom always told me to leave something better than when you found it, and it looks like we’ve done that in a big way,” senior captain and safety Landon Baty said. “I think next year we’ll surprise some people and get after it again. I'm just excited to be apart of it and proud to be a Lion.”

Going into the off-season, the team will focus on rehabbing its injured players back to full health and furthering the development of those players that have led the team in their absence.

Most notably, sophomore quarterbacks Josh Bean and Dillon Davis and junior wide receiver Josh Wainwright will all hopefully return to a rejuvenated Columbia squad next year.

The coaching staff emphasized at various points throughout the season that this is a young team. It features first-years and sophomores in prominent roles on both sides of the ball, a rarity in the Ivy League. The staff now has eight months to focus on learning from these past ten games and pushing the team towards better overall play.

The Lions are scheduled to kick off their bid at three consecutive winning seasons next fall at St. Francis (PA) on Sep. 21, 2019.

Perhaps a second-ever Ivy League title is in the cards.