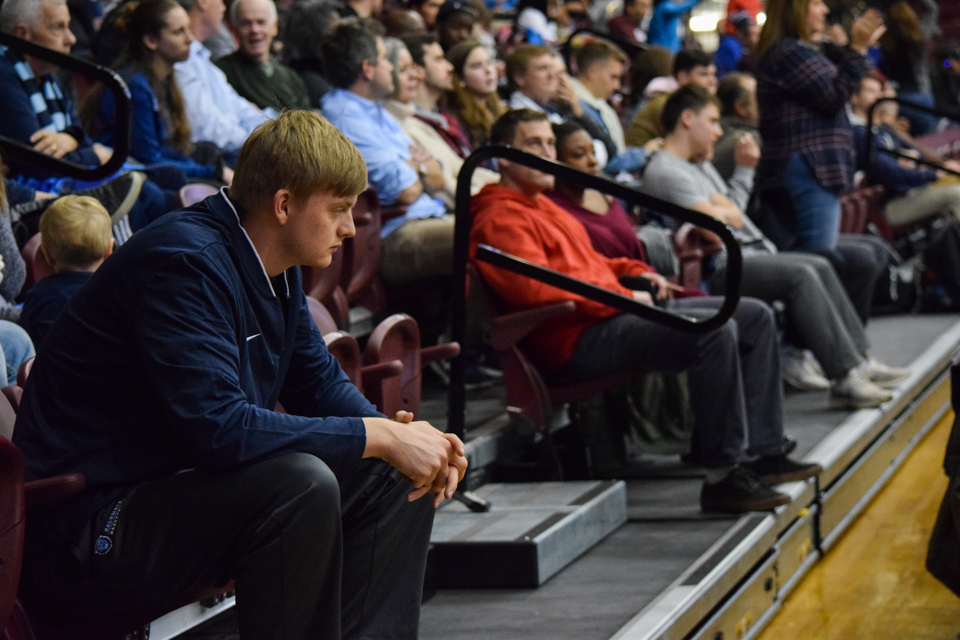 Kallin Spiller and Joseph Smoyer (pictured) made the decision to transfer to Columbia from the Pacific Northwest for different reasons, but both are united by a desire to contribute to their new squads going forward.

The word is a beautiful kind of contradiction—“mind-body.”

The word is a paradox—“non-physical-physical.”

Its hyphen silently screams for unity, and yet the word wages a civil war—“student” and “athlete” endlessly striving for concession; longing for compatibility; seeking balance.

It was this very balance between the academic and athletic that sophomore Kallin Spiller and junior Joseph Smoyer sought when they transferred to Columbia this fall, joining the women’s and men’s basketball teams, respectively.

Excelling both in sports and academics at Seattle University, Spiller epitomized the term “student-athlete.” Yet, she felt further from equilibrium than ever before. Her academic achievements felt remarkably hollow and the academics at Seattle, uncomfortably vapid.

In search of a challenge, Spiller chose Columbia. According to Spiller, this choice was “mostly academic” in nature. Still, she was eager to bring her skills to women’s basketball and excited to “better the program as a whole.”

For Smoyer, the transfer to Columbia was predominantly driven by basketball. Averaging only 11.8 and 7.6 minutes of play during his first two seasons, respectively, Smoyer was dissatisfied with the athletic program at Portland. He wanted more out of his collegiate basketball career and thought Columbia might give him more time on the clock.

Smoyer acknowledged the scholastic merits of Columbia, but ultimately was motivated by the camaraderie of the men’s basketball program when he made the coastal jump from Oregon to New York this fall.

“I really felt the team chemistry they created here, which I was really looking for. That was the biggest thing that stuck out to me,” Smoyer said.

Student-athletes’ reasons for matriculating to the Ivy League vary. For Spiller, her inner student brought her to Columbia. For Smoyer, it was his inner athlete.

Regardless of why they are here, they might just be exactly what the Lions need.

At Portland, Smoyer tallied a field goal percentage of 58.6––a team best for the 2016-17 season. In the 2017-18 season, he appeared in 23 of 34 games and blocked three shots against Pepperdine in just nine minutes of play.

These stats are not necessarily impressive by any means, especially when juxtaposed with Spiller’s.

At Seattle, then-first-year Spiller appeared in 32 of the Redhawks’ 33 games, starting in 27 of them. She even made history, leading her team to its first-ever Western Athletic Conference championship title, and a trip to the NCAA Tournament.

In the first round of the conference tournament, she collected a career-high 28 points—the highest amount of points for a first-year at the tournament in the last 13 seasons. Over the course of the season, she accumulated 6 double-doubles—best out of all WAC first-years—and achieved a field goal percentage of 51—the second-best in the conference.

Spiller attained these athletic successes all while maintaining a 4.0 GPA. To the untrained eye, this GPA is outright perfection, but to Spiller, it is flawed—representative of an imperfect academic environment.

She obtained stellar grades without significant mental exertion. She attended discussion-based classes as the only active participant, her peers rarely raising their hands to chime in on the day’s lecture. She felt like the only one in the classroom who was as present in mind as in body. For the first time in her life, Spiller didn’t enjoy going to school every day. She wanted more out of her education.

“I'm very proud of the 4.0 I earned at Seattle, but I did want to challenge myself and make my time at school worthwhile,” Spiller said.

In considering transfer options, Spiller remembered women’s basketball head coach Megan Griffith, CC ’07, whom she met during the high school recruitment process. Looking back on the period, Griffith was one of “the most memorable” coaches, as she was the first to reach out.

Despite Griffith’s demonstrated interest, Spiller committed to Seattle to play both volleyball and basketball. Although Spiller had always envisioned herself in the Ivy League, the decision ultimately came down to money and morality: ask her parents to pay her way through Columbia or attend Seattle University on a full ride. To Spiller, the decision was obvious.

And yet, a year later, Spiller reached a very different decision. Once again in contact with Griffith, she was now on her way to play basketball at one of the world’s most prestigious universities. After less than one semester at Columbia, Spiller is confident in saying that she made the correct choice.

At Columbia, Spiller has found more of a balance between academics and athletics. Smoyer, however, has not yet reached equilibrium. His “athlete” has been temporarily interrupted, due to an NCAA policy that prohibits transfers from competing during their first academic year at a new institution.

For this reason, Smoyer will spend his first season training with the team during practices, but watching from the bench during games. Spiller faces the same fate.

Although ultimately sidelined, the two transfers remain optimistic about their roles on their respective teams and their ability to make major contributions in future years.

Smoyer—who stands tall at 6-foot-11—acknowledges that his height could aid in the Lions’ defensive game, which has suffered in recent years due to the shorter makeup of the team.

“I think I’m a very skilled, big man. I need to get better at defense. Just trying to be part of this defense, that can help us win a championship,” Smoyer said.

Spiller hopes to combine her in-the-post, back-to-the-basket type of playing with her outside shooting. Specifically, she hopes to aid in rebounding.

“I'm kind of the only true post that my team has, as my teammates have told me. I think I have really good sight for the ball,” Spiller said. “Watching the first couple games, it would be nice to get a presence in there and get those boards so I can kick it up to our speedy guards who can hit threes.”

Both Smoyer and Spiller joined the Columbia basketball program with skills and experience: Spiller in earning a championship title and Smoyer in competing against NBA bigs in the more competitive West Coast Conference.

Smoyer, unlike Spiller, is unproven. His stats are relatively mediocre. He came to Columbia to prove himself. But for now, all he can do is wait, work, and wonder what next season will bring. Instead of performing on the court, he is playing a waiting game in the stands––sacrificing a whole season of minutes for the chance to see more time next year than he has seen in years past.