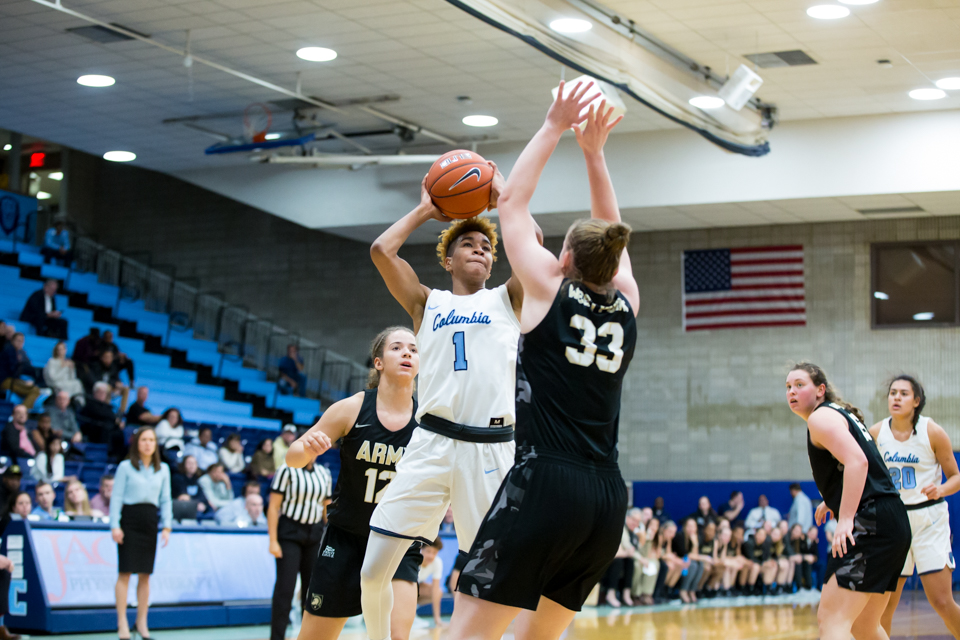 Junior guard Janiya Clemmons has emerged as a reliable force for women's basketball as it adjusts to the post-Camille Zimmerman, CC '18, era.

Columbia is on defense with three minutes left in the third quarter of its 2018-19 home opener. A West Point player is caught in a trap by the baseline. The player looks to pass the ball to a teammate at the three-point line. Seasoned junior guard Janiya Clemmons anticipates this move, stealing the ball midair. She dribbles to the top of Columbia’s offensive key and dishes a pass to sophomore guard Riley Casey, who swishes a three.

15 seconds later, history repeats itself. Janiya scrambles to get another steal on defense, drives to the three-point line, and passes the ball to junior guard Stephanie Flynn, who makes the three-pointer—back-to-back three-point shots for Columbia, and back-to-back steals for Janiya.

These defensive plays are a product of the work Janiya has put in to improve her defense, which has become the most impressive aspect of her game. Janiya’s defense during her debut season, once-shaky, has now become a solid and reliable tool used to stabilize the team on the court.

Janiya’s average statistics, outlined year-by-year below, show steady improvement. While statistics can never tell the full story of an athlete's performance, the increase of Janiya’s numbers parallel her growth on the team, both as a player and a leader.

Janiya’s introduction to basketball happened when she was 10 years old, a time when, according to Janiya, “we all couldn’t even touch the rim. We all just ran around a lot, and it was super fun.”

That and the participation trophies at the end of the season was enough to pique Janiya’s interest in basketball and keep it for the next 10 years.

Although she ran track and field in middle school, basketball was always Janiya’s number one sport. Once she entered high school and started to play elite-level basketball, Janiya set her sights on college basketball. That’s when Columbia entered the picture.

“Columbia was actually the first school to ever recruit me,” Janiya said. “They were always there. I still went through the whole process with different schools and weighed all of my options. At the end, Columbia was definitely the best choice as far as academics and basketball.”

It also helped that Janiya’s uncle, Henry Stanley, CC ’05, was not-so-subtly encouraging her to join him as another Lion in the family.

Head coach Megan Griffith, CC ’07, a coach of Princeton’s women’s basketball team at the time, was also looking to recruit Janiya for a spot in the Tigers’ lineup.

“I made a couple phone calls with Janiya and her coaches while I was at Princeton,” said Griffith. “She had decided before I even got the job here.”

Coincidentally, both Janiya and Griffith chose to represent the Light Blue over the Orange for their 2016-17 inaugural seasons.

Janiya’s transition to college basketball during her first year was not the smoothest. Learning how to juggle academics and basketball in a college setting with new coaches was not an immediate success for her. Although Janiya started in her first scrimmage, she did not make the starting lineup again until the team’s second matchup against Harvard, 23 games into the season.

“She had to learn a lot,” said Griffith. “She had to bide her time and figure out the system, how to play harder defense and really grind out in practice. We had a lot of moments her freshman year that weren’t always roses for her.”

Like Griffith said, Janiya’s defense was an aspect of her game that needed improvement. At the time, Janiya was ranked 9th on the team in defensive rebounds, tallying 29 in total for the season, and ranked 5th for steals, recording 12 in total.

Mental and physical improvement—the two elements that allowed Janiya to hit her stride—solidified her position as an active team member during her sophomore year. One reason for her success was the development of her physicality through off-court workouts. Janiya’s growth in mental resilience and confidence were also two important sources for her improvement. Janiya’s increase in results on the court did not just happen naturally. She had to strengthen herself from the inside out.

“I have seen Janiya grow her game by increasing both her physical and mental toughness,” said former teammate Camille Zimmerman, CC ’18. “She has dedicated countless hours to getting herself stronger in the weight room and on the court.”

Janiya’s game quickly began to improve during her sophomore year. After the first nine games, Janiya earned a spot in the starting lineup that she has yet to relinquish. By the end of the season, Janiya’s statistics were among the best on the team. She was ranked third on the team for minutes and points, tied for second in steals, and ranked second for rebounds behind Zimmerman.

Janiya’s leadership skills, however, did not develop as quickly.

“I stepped up a little bit more as a leader but not so much,” Janiya said about her sophomore year. “I still kind of relied on our seniors for a lot of that leadership.”

Soon, however, sophomore year ended for Janiya, and those seniors graduated. Now left with only one active playing senior, it was time for Janiya to fully take hold of a leadership role on the team.

“I kind of felt like, [the seniors] just left and alright, you’re next. You’re an upperclassman now. You have to take on that role,” Janiya said. “I knew it was coming toward the end of the season. Over the summer I thought about it a lot and what that would look like for me.”

As a junior for the current 2018-19 season, Janiya has now emerged as the leader of the team, according to coach Griffith. From the sidelines, you can hear Janiya constantly encouraging and correcting her teammates, making her presence on the court undeniable.

Janiya’s leadership this season has been defined by flexibility. She believes that the needs of each player are different, so learning how to cater her leadership style to different needs has been Janiya’s main focus.

“My big thing is, every player needs something different,” Janiya said. “Like some players, they need you to yell at them and tell them to get their stuff together,’ while others kind of shrink when they get yelled at and you need to be more encouraging.”

The defense that was once a weak aspect of her game is now one of Janiya’s strengths. It is what, according to Griffith, will help make the team great. Janiya now leads the team in rebounds, with a total of 36 for the season, and is second in steals, totaling seven for the season so far.

The season is only just getting started, and with her new role as a top leader and player, Janiya has high expectations for both herself and the team.

When asked about one goal she has for this season, Janiya said, “I would say I want to lead my team to the Ivy tournament for sure. The way that we’re going to be able to do that is with great leadership, great followership, and determination. That’s my mission. I’m going to do everything that I can to complete that mission.”