The unexpected arrival of Kenny Blakeney

The unexpected arrival of Kenny Blakeney 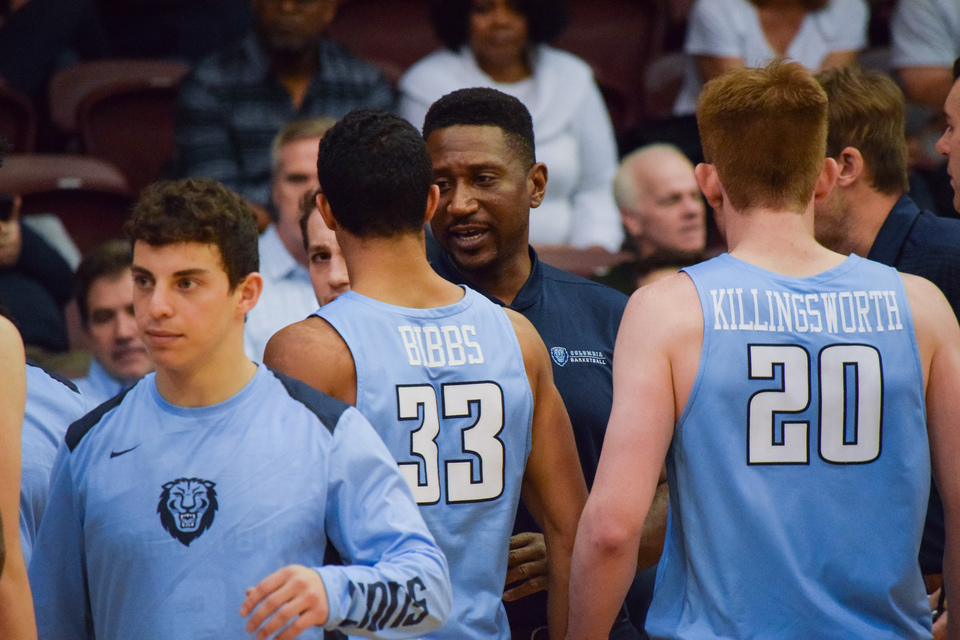 Men's basketball assistant coach Kenny Blakeney has accrued a wealth of accomplishments during his career as a basketball player and coach, but serving as an assistant at Columbia has provided Blakeney with a fresh perspective on life.

The men’s basketball bench often depicts the entire range of human emotion in rapid succession. In the first game of the season—a loss against a tough Marist squad—one could find head coach Jim Engles walking the length of the floor, alternately stone-faced and shouting, raising his arms above his head to encourage defense. One could find assistant coach Jesse Agel barking suggestions down into the low post, careening with every turnover or sloppy play.

Situated directly in the middle is new assistant coach Kenny Blakeney. He does not turn or yell. Instead, he sits, pen and pad in hand, taking notes as plays progress. When timeouts are called, he rises and drifts among a sea of light blue jerseys.

Blakeney possesses a basketball pedigree distinctly apart from any other member of the Lions’ coaching staff. He won national championships as a player with Duke, competed in the NCAA tournament on several other occasions as an assistant coach, worked directly under current Notre Dame coach Mike Brey, and found success as an Ivy League assistant at Harvard.

Yet when he joined Columbia, he was not hired into a position. He did so as an unpaid volunteer—operating essentially in his capacity as a coach—and did so happily. For him, it was a necessary return to the game he loved.

“When this opportunity came along, I jumped at it,” Blakeney said. “I thought it was a tremendous opportunity for myself and my family.”

Blakeney speaks often of family, of his love for his wife and his daughter, and of his desire to establish himself as a family man.

It was only natural, then, that when the time came for Blakeney to make a life-altering decision, he chose family.

In 2012, following the end of his fourth season as an assistant coach for Harvard’s men’s basketball team—a season in which the Crimson won 26 out of 31 total games—Blakeney respectfully stepped down and relocated to New York City to be closer to his then-girlfriend, now wife. He would not return to a collegiate coaching staff until joining the Lions earlier this year.

Listening to Blakeney tell it, his departure from Harvard seemed unavoidable. Her job kept her in New York and his near Cambridge.

Blakeney concedes that he left “a lot on the table” at Harvard, having helped the team improve its record every year that he was on staff. Regardless, he adjusted to a new life in the city, started a business, and developed a routine. Eventually, he began working with a friend at Under Armour, utilizing his networking connections within the basketball world to help improve the brand. It was this renewed proximity to the sport that rekindled his passion for it. In his own words, it “got my appetite wet.”

Engles helped bring him back into the fold. After being contacted by a mutual friend who stated that Blakeney was looking to re-enter the world of coaching, Engles was forced to decline at first. He had a full staff. With the first opening, however, the conversation opened up again. This time, an offer came.

“I said, well it’s only a volunteer position—you’re not gonna make any money. I know his experience. Would he be interested in that?” Engles said. “And he actually said he would be interested. When he said that, a guy with his type of resume as a volunteer, I mean it just made every sense in the world.”

Blakeney’s time as a volunteer did not last long, as prior assistant coach Jean Bain left the program to assume head coaching duties at Brandeis. Seemingly a blow at the time, the move allowed for Blakeney to take on an official position.

Engles and Blakeney speak of one another with limitless mutual respect. Blakeney frequently praises Engles’ understanding of the game, describing him as an excellent X’s and O’s coach who adapts with ease to the more modern style of play. This can be seen most obviously in the Lions’ undersized lineups and high-tempo style of play. To Engles, Blakeney strides in player development, bringing an energy and an unparalleled experiential knowledge to each practice.

“What’s great about coach Kenny, I was talking to him before practice, he was like, ‘Oh I gotta stretch cause I gotta coach hard,’ and I said ‘What do you mean ‘coach hard’?’ You always see him running up and down the court, telling us where to be on defense, correcting us every time we come off,” sophomore guard Gabe Stefanini said.

Above all else though, it is Blakeney’s reputation that garners immediate respect. He’s worked with Coach K and Brey, won titles, competed in the tournament, navigated college basketball, and emerged a perpetual victor. For a team starved of success, Blakeney is a glutton.

According to Engles, Blakeney’s great strength comes in his ability to connect with players—to operate as a leader and a guiding force.

“Kenny’s a great mentor. We’re from the same place, the same hometown and everything, so he kind of just knows the rundown of the D.C. area and how life is down there. So he’s just been telling me to keep my same values I had in high school—just be gritty,” first-year Ike Nweke said.

Blakeney reiterates at length that this is his true interest: the players. He may feel to an extent that the game of basketball has outpaced his knowledge, but his ability to connect with players has been a constant at every stop in his career. He oversaw aspects of recruiting for La Salle, University of Delaware, and Marshall, always helping the team improve.

Now, he will take on the same challenge for a depleted Columbia roster. His mission is rejuvenation and improvement. In short, development.

“Our current players are already the most important part of what’s going on right now. Any way that I can be there for them—assist, mentor, be a friend,” Blakeney said, “That’s a huge opportunity for me to try and help this program along.”

The Lions have reached a stasis point. They lost four of their eight most-played players last year, have routinely underperformed the past two seasons, and find themselves in a deep hole early this season after losing their first four games. As of now, they are favored to win just four games for the remainder of the season.

Nevertheless, Blakeney espouses a future rife with potential. He describes a team full of young players, all capable, who have yet to properly grow and gel. With him and Engles at the helm as a tandem of intricate, detail-first basketball knowledge and personal player mentorship, it seems possible that there is cause for optimism, as slight as it may appear now.

When asked about goals, Blakeney brushes aside any tangible expectations, bringing it back to where it began: family.

“When I came here, I told Coach Engles, I came here as a volunteer assistant, and I said if I can be a volunteer assistant for the next 20 or 30 years, I’m cool with that. And I meant it,” Blakeney said. “First and foremost is the importance of my family. I want to see my 20 month old daughter as much as I can. I want to spend time with my wife as much as I can. … There wasn’t any goals.”