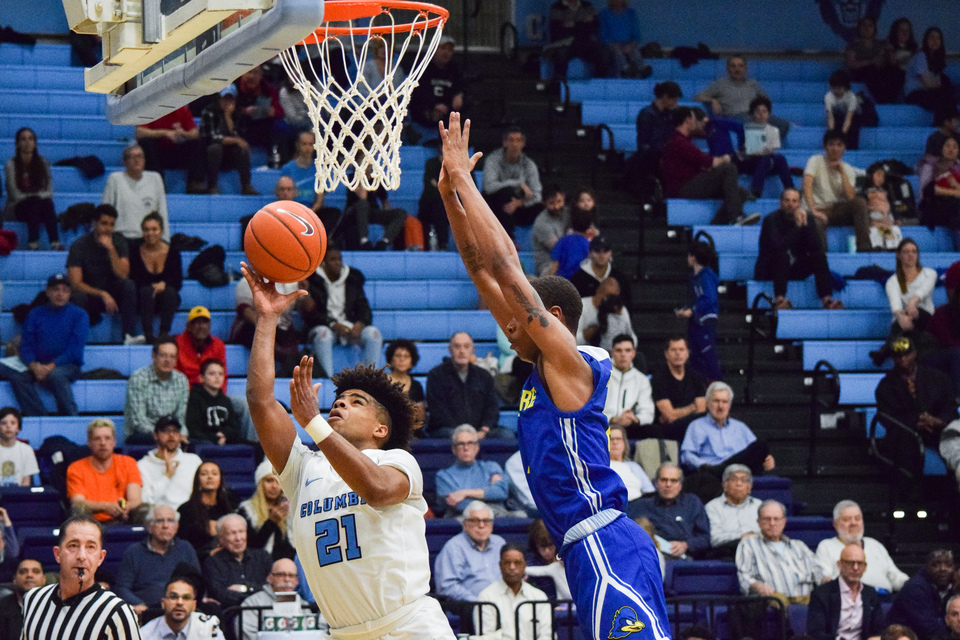 Junior guard Mike Smith finished the game against Delaware with 31 points and 5 steals, but the Lions were just shy of what they needed to win.

In a contest pitting star power and athleticism against depth and tactics, Delaware’s individual talent narrowly edged out Columbia’s blue-collar approach. The Lions fell to the Fightin’ Blue Hens by one point in double overtime despite staging multiple comebacks in the waning seconds of the fourth quarter and first overtime.

The Light Blue (1-5) played an efficient brand of team-driven basketball, with 10 players seeing at least eight minutes on the floor and all but two of them scoring. Delaware (7-2), on the other hand, played its five starters for 92 percent of the available minutes—essentially winning the game without its bench.

As he often does, junior guard Mike Smith led the way for the Lions, with 31 points and 5 steals. Smith had converted just 20 percent of his three-pointers coming into the game but sunk four of his eight attempts from deep to end the minor slump. He was perhaps equally impressive on defense, holding Delaware’s star point guard Kevin Anderson to just 4-of-15 shooting overall with 6 turnovers on the day.

“I guard Jimmy Butler every summer—he tries to post me up, I tell everybody I don’t need help,” Smith, who’s been friends with NBA star Butler since before coming to Columbia, said. “For sure, if I guard Jimmy in the post, I can guard [Anderson] in the post.”

Throughout the game, points came in bunches for the Fightin’ Blue Hens. Wings Matt Veretto and Ithiel Horton, both first-years, combined for 40 points on 15-of-27 shooting from the field, including an astounding 10 of 14 shots from three.

The entire 50 minutes was an instance of good offense besting good defense. The Lions played a tight, trap-man defense that forced 19 turnovers, but Delaware still managed to shoot 47.6 percent from the field and a stunning 65.2 percent from beyond the arc.

When the ball was not flying around the arc, it was in the hands of center Eric Carter, who dominated in the second half and both overtimes en route to 21 points and 15 rebounds. Head coach Jim Engles threw multiple defenders at Carter all game but could barely slow down the Delaware star.

“They run most of their offense through [Carter] and [Anderson], their two main engines, so we really tried to focus on them,” Engles said. “I thought everybody stepped up; we tried to follow the game plan. We were right there—just needed one more stop at the end there.”

When it came to the game-winner, however, Delaware wing Darian Bryant, the least heralded of the starting five, secured his side’s victory. Down by 2 in the second overtime, directly after a Smith steal and layup, he caught the ball on the wing and rose up for the 3 points that brought the last lead change. He had also defended crucially on the wing all game, holding sophomore guard Gabe Stefanini to just 5-of-16 shooting.

While Stefanini did not play particularly efficiently, his heroics in the first overtime kept the Lions alive. The end of regulation saw Smith score a lightning-quick layup and a fading three-pointer in quick succession to tie the score at 70. The end of the first overtime was similar—on back-to-back offensive possessions, Stefanini willed himself open and drained two threes that felt good even before they left his hands.

Smith and Stefanini were joined in the heroics by senior guard Quinton Adlesh. The reigning three-point champion of the Ivy League went 5-of-8 from downtown, scoring 14 of his 19 points in the second half and both overtimes to keep an occasionally stagnant Light Blue offense afloat.

Despite making 13 three-pointers and winning the turnover battle for the second consecutive game, Columbia was ever so slightly overmatched by Delaware’s dominant athleticism. The Lions needed to play perfectly, but they fell just short. They hit all the benchmarks for an upset, but it wasn’t enough. However encouraging the team’s play was for Engles and his staff, losing a game like this has to sting.

The Light Blue’s next game will be against Colgate in Levien Gymnasium on Wednesday. Tipoff is scheduled for 7 p.m.