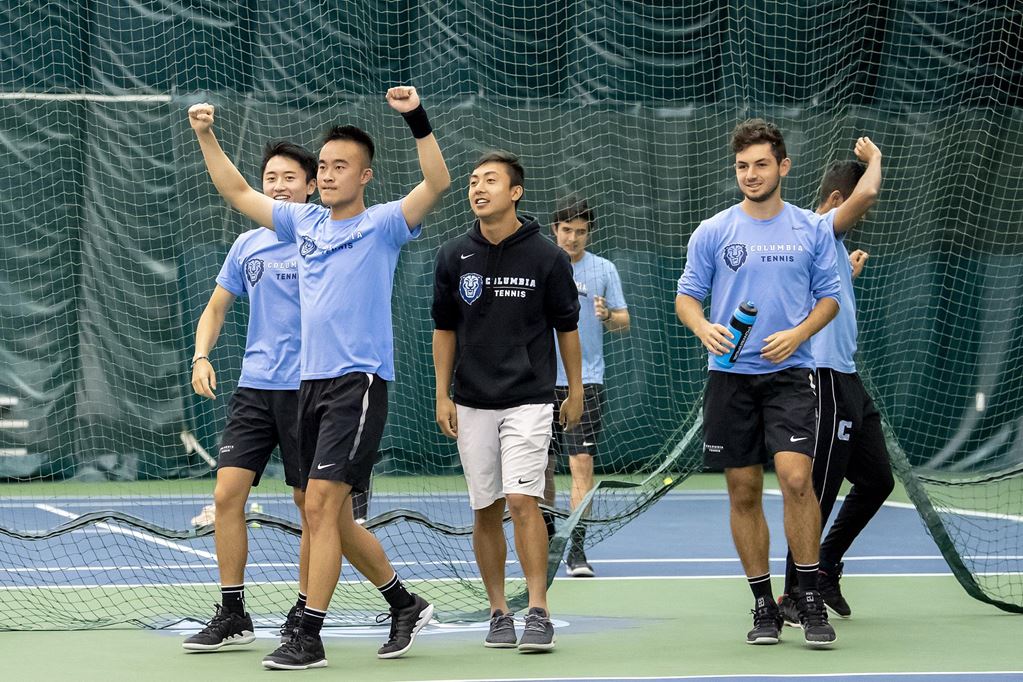 After winning their sixth consecutive Ivy League title last weekend, the Lions cruised by their opponents in the first two rounds of the NCAA Championships.

From the moment the match began, spirits were high at the USTA Billie Jean King National Tennis Center. Competing shouts of “Let’s go Lions” and “Let’s go Bulldogs” radiated across the stadium as fans from both schools vied to have the loudest chant in the stands.

Despite the vocal cheers of its competitors, men’s tennis was unfazed on the court in its opening match of the NCAA Division I Team Championships.

No matter the score, the players high-fived after every point. They came in with the will to win.

Due to their No. 16 ranking, the Lions (18-3, 7-0 Ivy) hosted Bryant (20-11, 6-0 NEC) on Friday at Billie Jean King. This marked only the second time in the program’s history that it achieved the honor of hosting the first and second rounds of the tournament.

In doubles, the tandem of sophomore Jason Liu and junior Adam Ambrozy made quick work of Bryant’s Grant Pertile and Jorge Ortiz-Garcia 6-1.

After clinching the final match of the regular season, Ambrozy returned with the same winning fervor in his match against the opposition. Ambrozy appeared to be imbued with a new spirit, his already-powerful forehands seemed stronger, more risk-taking.

Senior Victor Pham referred to the early rounds of the NCAA Championships as “a fun part of the season,” and for the first time in a while, Ambrozy looked like he was having fun on the court.

However, it was Liu who shined in the doubles match. With a series of mighty backhands, Liu took control of the court.

In top doubles, sophomore Jack Lin and senior Will Matheson, ranked No. 30 as a doubles pair, secured the early advantage for the Lions, winning their match 6-3. Lin and Matheson’s final point saw the duo forcing their opponents to sprint back and forth across the court for each return. Finally Matheson thwacked the ball, barrelling it down the doubles line where his competitor was unable to make a play, granting the Light Blue the doubles point.

Before any of the other singles matches could finish, it began to rain and the matches were suspended. The suspension lasted an hour and ended with head coach Bid Goswami insisting upon using a blower to dry the courts, despite staff urging him that they would do so themselves. Following a season that saw the team take home its sixth consecutive Ancient Eight crown, Goswami, who was awarded Ivy League Coach of the Year, is set to retire.

When play resumed, however, senior Timothy Wang avenged his loss last weekend—his first defeat in Ivy play over the course of his four seasons at Columbia—with a 6-2, 6-0 win.

Sophomore Austen Huang clinched the match for the Lions with a 6-3, 6-2 win against Michael Plutt. Due to Huang’s win, all other matches went unfinished, though No. 117 sophomore Rian Pandole led his opponent 6-2, 5-0.

Following their 4-0 shutout of Bryant, the Lions advanced to the second round of the NCAA Championships with a match against Penn State (20-9, 8-3 Big 10) the next day. The team’s win against Penn State marked its 10th consecutive win since March.

Due to persistent weather issues, the match was moved indoors to the Dick Savitt Tennis Center and pushed back to 3:30 p.m. The changes, however, did not shake Columbia, as it triumphed over the Nittany Lions 4-0.

Pham and Pandole defeated Christian Lakoseljac and Christos Antonopoulos in doubles for the first win of the day 6-2.

For the second day in a row, Lin and Matheson captured the doubles point for Columbia 6-3 against No. 45 Constant De La Bassetiere and Gabriel Nemeth.

Wang claimed the first singles point of the day in 6-4, 6-1 win at fifth singles, while Huang followed Wang’s lead once again, tallying a 6-3, 6-0 win against Alp Sentay.

No. 107 Ambrozy once again proved his dominance on the court, rallying back from a 4-2 deficit in a first set tiebreaker to clinch the fourth point for Columbia. Ambrozy powered through 7-6 (4), 6-0 to defeat Gabriel Nemeth.

“I’m really proud of the way the boys played today,” head coach Bid Goswami said after the Bryant match. “I knew if the guys came in and played their best, then we would do well. But the competition will get harder moving forward.”

Heading into the Sweet 16, the Lions will play Ohio State, ranked No. 1 in the country. It will take determination, perseverance, and, more than anything, a winning spirit to defeat the Buckeyes, all traits that the Lions have consistently shown over the course of the season.

The Lions will continue to fight for the NCAA crown against Ohio State on Saturday, May 11 in Columbus. First serve will take place at 1 p.m.