No. 16 men’s tennis exits NCAA tournament with loss to No. 1 Ohio State

No. 16 men’s tennis exits NCAA tournament with loss to No. 1 Ohio State 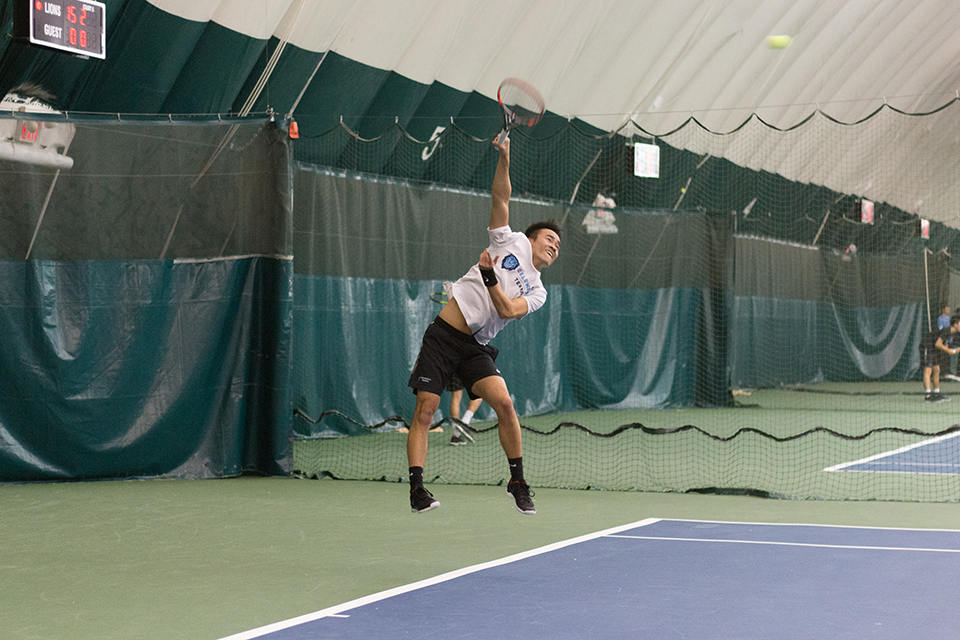 Senior Tim Wang captured the lone win for the Lions at fifth singles. Wang made quick work of Alex Kobelt 6-4, 6-3

All good things must come to an end. And on Saturday, the stellar season of No. 16 men’s tennis came to an end following a 4-1 loss to Ohio State in the Sweet 16 round of the NCAA Championships.

The Lions (19-4, 7-0 Ivy) came into the match as heavy underdogs. The Buckeyes sat at the No. 1 ranking for the majority of the season, and Ohio State’s JJ Wolf—the youngest American in the world’s top 500 players—has remained in one of the top three ranked spots in college tennis since November. Taking on Ohio State in Columbus, the Light Blue faced a massive undertaking, one it ultimately could not accomplish.

The loss not only marks the end of the season for the Light Blue, but also Goswami’s final chance to make it to the Elite 8, which would be a first for the program. Goswami, Columbia’s winningest coach, is retiring after a 37-year career that most recently saw him lead the Lions to six consecutive Ivy League titles.

Coming off two 4-0 wins against Bryant and No. 34 Penn State, the team flew to Columbus earlier in the week. However, Goswami understood that this time of year is a stressful one for his players, who must juggle competing with their final exams.

When asked on Tuesday about how the Lions were preparing for taking on the No. 1 team in the country, Goswami said, “We are preparing by finishing our studies in Lit Hum, Econ, and CC.”

He also noted that he would be proud of the team no matter the outcome.

“Even if we just put ourselves in contention, and we fulfill what we have hoped to do, it is a win anyways,” Goswami said. “If we lose, it’s because they’re better than us. There’s no shame in that.”

In doubles, the Light Blue struggled to keep up with its opponents. In first doubles, sophomore Jack Lin and senior Will Matheson—ranked No. 30 by the ITA—failed to overtake the No. 23 pair of JJ Wolf and Martin Joyce 6-2. Ohio State’s Hunter Tubert and John McNally finished the job with a 6-3 win over the tandem of junior Adam Ambrozy and sophomore Jason Lui, giving the Buckeyes the early 1-0 lead.

Despite their best effort, the Lions were also unable to conquer the Buckeyes in singles play. At sixth singles, sophomore Austen Huang dropped his match 6-1, 6-4 to Tubert, giving Ohio State its second point of the day.

Tim Wang captured the lone win for the Lions at fifth singles. Wang made quick work of Alex Kobelt 6-4, 6-3. This win marks Wang’s third consecutive win in NCAA play, bringing him to a record of 9-1 for the spring season.

Things looked up at this point for the Light Blue. No. 37 Victor Pham had taken his first set over No. 2 JJ Wolf, and two other Lions were leading in their second sets.

After Pham’s loss, Columbia needed to win each of its three remaining matches to take down Ohio State. In a season where the Light Blue won the Ivy League title outright by rallying back from a deficit against Cornell, the possibility was still likely. But the Light Blue was unable to fight off the Buckeyes as No. 22 Lin was bested by No. 26 McNally 6-3, 7-5.

No. 107 Ambrozy and No. 117 Pandole were both leading in their tiebreakers when the match was called.

While a loss to the Buckeyes was not the end goal for the Light Blue, there is much to look forward to for the team. Associate Head Coach Howard Endelman will take over as head coach following Goswami’s retirement, and though Lions will lose seniors Victor Pham, Tim Wang, and Will Matheson, three players who have been instrumental in the team’s success over the past four years, Goswami sees a bright future ahead.

“I’m pretty sure Jason Lui and [first-year] Ben Gollin will become much better in the next few years and continue really contributing to our program,” he said.

While the team’s season unfortunately ended when it was unable to clinch the win against Ohio State, Pham, Lin, and Matheson will travel to Orlando, Florida to compete in the NCAA Division I Men’s Tennis Singles and Doubles Championships.

Lin qualified for an automatic bid as he was the highest-ranked singles player in the Ivy League at No. 22 at the conclusion of the season. This will be his first time in the singles competition. Pham will be returning to the 64-player singles tournament for the third year in a row, however. He received an at-large bid since he ended the regular season at No. 33.

The pair No. 30 Lin and Matheson will take on the 32-team doubles bracket for the second year in a row as the automatic bid from the Ivy League. The tandem is coming off five consecutive wins before their loss on Saturday.

The singles and doubles bracket have yet to be released, and the tournament will take place between May 20 and 26.