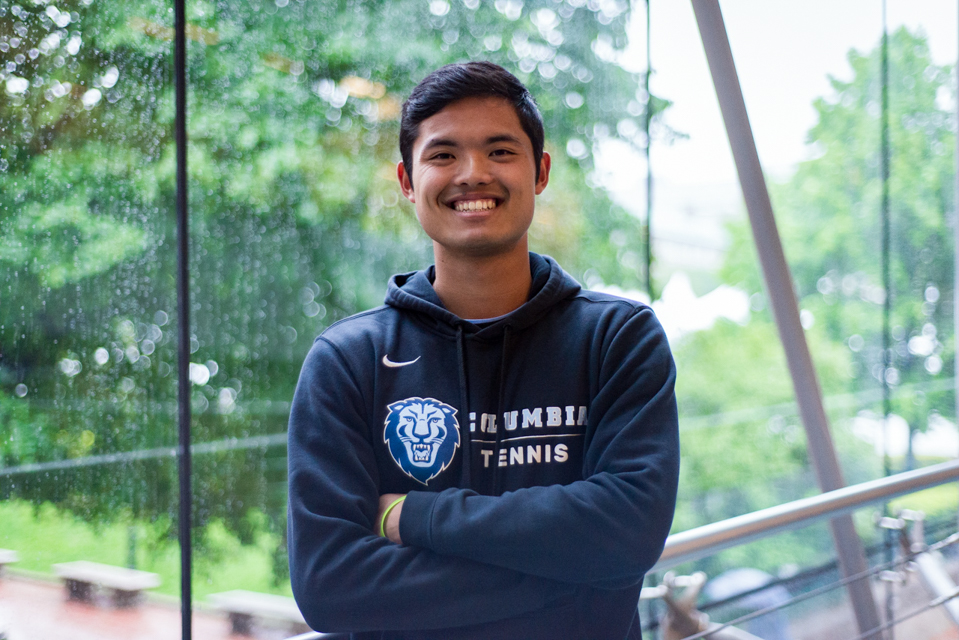 By junior year, Pham was co-captain of the men's tennis team. He was also Ivy League Player of the Year in both 2018 and 2019, but he doesn’t want his tennis success to be the only thing that defines his time at Columbia.

If there’s one thing to know about Victor Pham, it’s that he prioritizes family over everything. Pham spoke in great detail of the sacrifices his family has made to make him a champion and how grateful he is for all they’ve done for him.

“Both my brother and I were able to see success on the tennis court by the sacrifices my parents made. Dad spent all of his free time training and traveling with us and my mom supported the family by working,” Pham said.

The idea of family has influenced many of his majors decisions. His brother, Richard Pham, CC ’17, who also played tennis for the Lions, was one of the defining factors that drew him to Columbia. While having his brother around allowed Pham to have a part of his family on campus, he quickly found another family with the men’s tennis team.

By junior year, he was co-captain of the team. He was also Ivy League Player of the Year in both 2018 and 2019, but he doesn’t want his tennis success to be the only thing that defines his time at Columbia.

“I hope my legacy will be that I was a successful tennis player who contributed a lot to the program on the court, but also that I was a great leader off the court,” he said. “I just wanted to bring joy to the team—to my teammates—and some comedic relief. I wanted to make sure they know that we were in this together.”

In the fall of his senior year, Pham suffered a wrist injury that made him doubt if he would ever compete at a level on par to that of his junior year. But it was the support of his family and his teammates that allowed him to return to the court better than ever.

“It’s really amazing to think that I had wrist surgery in the fall and I didn’t know what this year had in store and whether I would be able to reach the level of my junior year. But I think this year has been my best season yet. Even if I wasn’t top 10, I think this has been the most successful season of my career,” Pham said.

Even though he was coming off over three months of being on the sidelines, Pham was able to go undefeated in Ivy play this spring. For his resurgent success, he thanked head coach Bid Goswami, associate head coach Howie Endelman, and his father—one of his greatest mentors.

Unlike many other players, Pham’s primary coach was not a hired private coach but his own father. Pham’s father did not have any experience coaching tennis, but learned from watching videos and reading books in order to teach his son to succeed. Pham claims his father’s dedication is a crucial part to his story and journey to Columbia. It was in fact his father who took him back to the court in December after his surgery.

He returned to become a dominant force at first singles, a position that he’s held since sophomore year.

He hopes that his success will continue in the NCAA singles championships. The tournaments began Monday, May 20 and continues until May 25. On the occasion that Pham continues to advance, he will have to miss his own Commencement ceremony. While Commencement represents a pivotal moment at Columbia for most students, Pham hopes that he actually won’t be walking across the stage on Wednesday—a testament to his dedication to the sport.

“It’s a win-win. If I make to Wednesday in the tournament, then I become an All-American. If I don’t, then I get to go to Commencement. Honestly, I hope I miss Commencement,” Pham said. “Tennis has been with me since I was five years old. To play my final collegiate match at the NCAA singles tournament, I wouldn’t be upset to miss Commencement just because tennis has been such a big part of my life, and it has shaped me into who I am. It’s a little ironic.”

Whether he is able to become an All-American is still unknown, but no matter the result, his family—both his actual family and Columbia tennis family—will support him every step of the way.