‘A whole new passion for the game’: After a season lost to injury, star wideout Josh Wainwright is ready to get back on the field

‘A whole new passion for the game’: After a season lost to injury, star wideout Josh Wainwright is ready to get back on the field 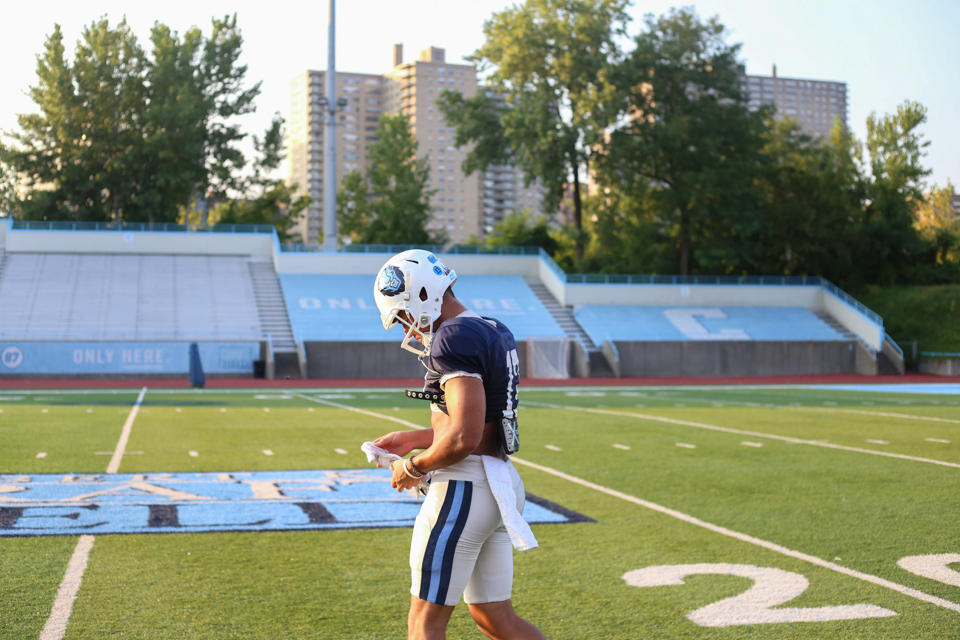 Wainwright will return to the field after a 2018 season lost to injury.

Last season did not go the way senior Josh Wainwright expected. Coming off of a 2017 season in which the Lions had finished 8-2 and Wainwright himself had hauled in 78 receptions for 1,001 yards and eight touchdowns, hopes were high for the star wide receiver. But, his 2018 season was over before it ever really began, as he tore his ACL in the second quarter of the season opener against Central Connecticut State.

While the injury was initially devastating for Wainwright, the senior from Texas is putting the pain of last season behind him, using it as motivation to take Columbia to unprecedented heights as he gets set to begin what will likely be his last season playing football.

“I wouldn’t wish a season-ending injury on anybody,” Wainwright said. “Not only the mental strain, but obviously, there’s a bunch of physical therapy that goes into it, just having to rehab your body back to where it used to be. But, you know what, it builds character, it builds heart, and it gives you a whole new passion for the game. So, you know, at the end of the day, while I wished it wouldn’t have happened, I like to say it’s a blessing in disguise.”

One person who didn’t see Wainwright’s injury last season as a blessing in disguise is junior quarterback Josh Bean. Despite being injured for much of last season himself, losing Wainwright, whom Bean calls “one of the best players in the league, if not the best,” made Bean’s job a lot harder when Bean was healthy.

When Wainwright went down in that first game, the team lost more than simply his production. Head coach Al Bagnoli says that opposing defenses focus so closely on stopping Wainwright that they often left other players open.

“He’s a really hard guy for safeties to defend, so he really almost draws double coverage and that leaves everything wide open for some of our other receivers,” Bagnoli said.

In addition to being arguably the most important player for the Lions in 2019, Wainwright has the chance to firmly establish himself as the greatest wide receiver in the program’s 150-year history. He is currently ranked fifth in school history in touchdown receptions with 13, receiving yardage with 1,562 and receptions with 124. Wainwright needs 922 yards, a number he surpassed in his sophomore season, to break the record held by Austin Knowlin, CC ’08, of 2,484 yards. That year, Wainwright also broke the single-season record for receiving yards, besting Don Lewis, CC ’84, by a single yard. While these records may leave fans in awe of Wainwright’s place in Columbia history, he tries not to think about it—at least not during the season.

Wainwright’s surgery to repair his torn ACL took place two weeks and a day after the injury occurred, and from that point on, he has been working every day to get back to full strength before getting back on the field for Columbia’s season opener: Sep. 21 at Saint Francis. Now, over 11 months since the surgery, Wainwright is ready to go.

“Right now, I feel great. I can’t tell the difference,” Wainwright says. “When I’m out there, I don’t think about it at all. It’s just another practice, which is exactly how I’d want it to be.”

Wainwright’s teammates rewarded him for his hard work by voting him as a team captain this season alongside senior linebacker Michael Murphy. For Bagnoli, the nomination of the two captains is not a reflection of their skill so much as their work ethic and overall demeanor.

Wainwright’s desire to excel is clear both on and off the football field, where he pursues multiple entrepreneurial endeavors. He and a few other members of the Columbia Athletics community pooled their money together to begin an investment group called One Ivy Investments. At their biweekly meetings, the group examines trends in the market to decide how to invest the $1,000 to $2,000 each of them contributed.

On top of this, Wainwright and teammate Alex Gibson, CC ’21, run Lion’s Den Rentals, a company that loans students attachments for their beds to transform them from twin XLs to full-size beds. So far, Wainwright says the group had about 50 orders this year, but that he has had to scale back his time working for the company this fall as the Lions prepare for a run at their first Ivy League Championship since 1961.

With the season set to kick off next week, Wainwright is excited to get back on the field and contribute as much as he can, as early as he can.

“I’m all systems go. Game one, I’m going to be on the field as many snaps as I can, helping my team in whatever way possible.”