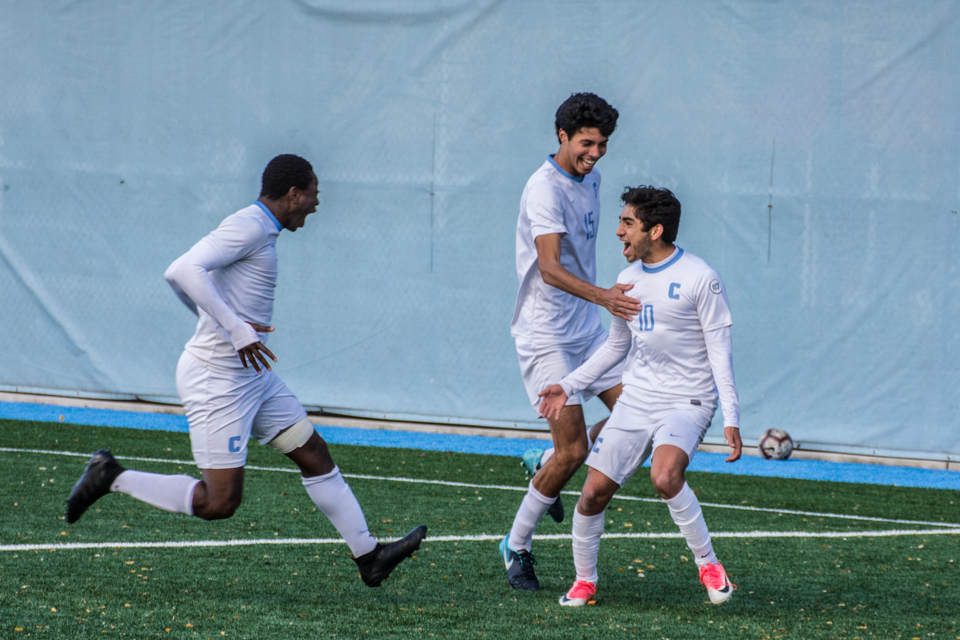 Senior midfielder John Denis netted Columbia's lone goal of the match, his first of the 2019 season.

Coming off a season in which men’s soccer lost the Ivy League crown by a single goal, the team has found itself unable to replicate last year’s success.

The Lions (0-1-2) failed to get their first win of the season during their home opener on Friday against West Point.

The Lions had two attempts on goal within the first 11 minutes of the game, one shot by first-year Uri Zeitz. Both were unsuccessful, leaving the match at 0-0 until the 33rd minute. It was at that moment when Army’s Keenan O’Shea was able to sink the first goal of the match.

While Zeitz is still new to collegiate soccer, he has already proven himself to be vital on the field, playing for all 110 minutes of the game and armored with friends and supporters screaming his name in the stands.

Denis’ shot was extremely impressive, hitting the crossbar, going out of the goal and back in. He claimed that a strong team dynamic helped him make the goal; it is the same team dynamic that will allow the Lions to take the Ancient Eight crown this season.

“I’m thankful for the team and for the opportunity they gave me. I just want us to win everything we can this season. To win Ivies is the goal and has always been the goal.”

Spirits were high after Columbia’s lone goal, but the team was unable to pull through in the end with six failed attempts on goal in the second half and four failed shots in overtime.

Despite the weak results in the first three games of the season, head coach Kevin Anderson still thinks it is possible for the team to surpass last season’s record based on the team's strong performance in the first half.

“I think in the first half we had more consistency, more momentum. We were tactically and technically better, and we weren’t able to create the same opportunities for ourselves in the second half. It’s a tale for us of two halves. We lost our way a little bit,” he said.

Men’s soccer has often been close to winning it all but has always fallen a bit short. Anderson has no doubt that this team can finally win the title.

“Last season is last season. That’s over and has been done for a long time. We have 26 guys who showed up the same day for preseason the same way I did and the rest of the staff did. We’re all working hard, it’s a process we have to go through,” Anderson said. “What we did last year or the year before is not what we’re going to do now. We just have to get this group of guys in spots where guys can show the talents they have. We haven't shown or delivered yet what we can do, but the first half tonight is closer to what we’re looking for.”

On Monday, the Lions will take on No. 19 St. John’s. This match will mark the first top 25-ranked team men’s soccer has faced since 2012. Kickoff will take place at 7 p.m. at the Rocco B. Commisso Soccer Stadium.