The man, the myth, the mascot: Roar-ee the Lion’s role in championing a stronger athletic culture at Columbia

The man, the myth, the mascot: Roar-ee the Lion’s role in championing a stronger athletic culture at Columbia 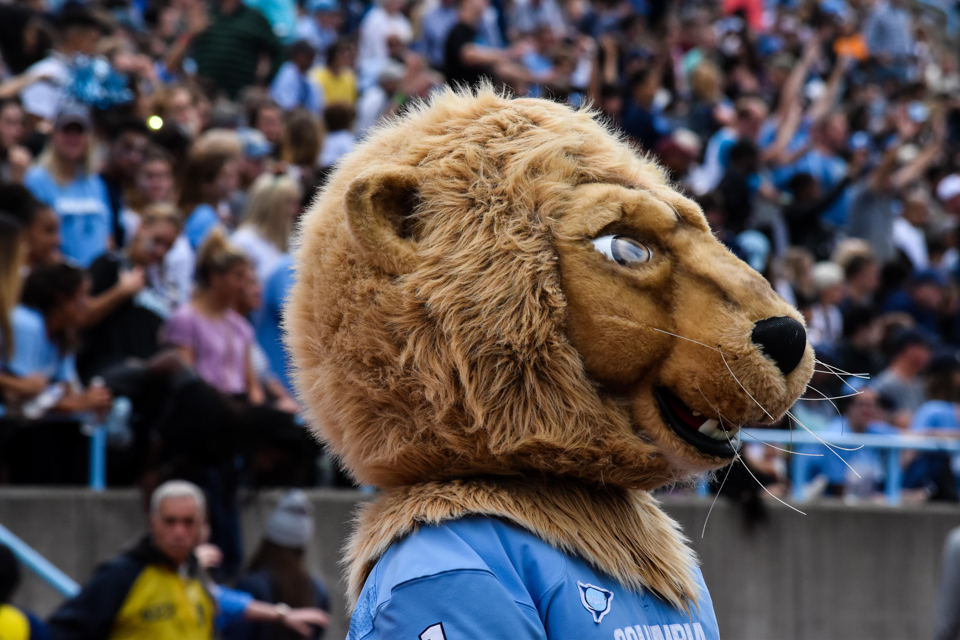 The identity of Roar-ee remains a secret to most as Roar-ee’s own personality is defined by the culture and history of Columbia.

Today, there are over 750 student-athletes that play under the Columbia banner. In four years, every single one of those athletes will have graduated. Teams can win an Ivy League title one season and then rank last the next. But in spite of the fleeting nature of college sports, there remains one constant in Columbia Athletics: Roar-ee the Lion.

The identity of Roar-ee remains a secret to most as Roar-ee’s personality is defined by the culture and history of Columbia, detached from the individual identity of the suit’s wearer.

“Being the mascot shouldn’t be tied to one person. Everyone does it differently, but it’s all tied to Roar-ee,” one former Roar-ee said.

This anonymity is one of the perks of being Roar-ee, so when one applies to become Roar-ee, the expectation is that they never reveal their identity to the rest of campus. (All Roar-ees interviewed for this story, both past and present, were granted anonymity to preserve the integrity of the position.)

“Roar-ee is a figure and not an individual. When you put on the suit, you forfeit some of your sense of self,” the same former Roar-ee said.

Choosing a lion as the mascot is a reference to the University’s time as King’s College under the British monarchy, whose crest consisted of three lions. Roar-ee’s jersey is emblazoned with 54, referencing the University’s founding in 1754.

In a 2005 vote, the student body decided to rename Leo, the former name for the University mascot, Roar-ee. With small adjustments made every decade or so, 2008 bore witness to the creation of today’s iteration of Roar-ee—taped-on tail and all.

According to the Roar-ees interviewed for this story, the process of donning the lion suit is relatively relaxed.

Multiple Roar-ees confirmed that the entire audition process consisted of simply trying on the suit and seeing if it fit, though a former Roar-ee cited their background in theatrics as a reason for their success in the position.

“I was a good mascot because I am a really extroverted person, and when my job was to home in on that, I really let go. I grew up doing theater and singing and being in front of audiences, but I also grew up playing sports, so I knew what to do with my body but also how to tailor my performance for the audience,” they said.

Some of these performances included riding the workout bikes meant to keep players’ muscles warm, grabbing the hat of the Princeton marching band leader and forcing him to chase Roar-ee around to get it back, and attempting to steal Athletics’ medical cart.

“One of my strengths was that I broke the rules and did what everyone was not supposed to do,” a former Roar-ee recounted. “I did the unsafe option that got people talking, and it made for a more interesting performance. My boss would get mad at me, but the audience loved it.”

The same former Roar-ee proudly announced that they had received two technical fouls in basketball games for running onto the court. Basketball, they claimed, let them have a lot of fun with their routine by messing with the other teams.

“During free throws for basketball games I used to do a striptease on the baseline. There was this one time we were playing Harvard, and they were shooting like 90 percent from the free throw line and they ended up going 1 for 6 that night,” they said. “After the game, the [head coach Jim Engels] came up to me and said, ‘You did that. Thank you, you did that.’ And we won on a buzzer-beater.”

But beyond sporting events, the person in the suit can be the heart of everything from Columbia student life events to private parties, where they are hired for the sole purpose of manifesting a sense of Columbia pride.

“Everybody loves Roar-ee,” a former Roar-ee said. “When I would walk around games or on campus it was all high-fives and ‘Can I get a picture with you?’”

Roar-ee was introduced to boost school spirit and create a more upbeat atmosphere at Columbia events, and the athletic department has no doubts that Roar-ee has accomplished this job.

“During media breaks [at football games], we try to utilize Roar-ee as much as possible to hype the crowd up and prepare them to cheer on the team for the rest of the game,” Michael Miller, associate athletic director of market strategies, said.

To be Roar-ee, a willingness to perform and a love of fun are truly the only requirements besides wanting to don the suit, which is cleaned after every wear. But the job isn’t as easy as it may seem; one must learn to energize a crowd without the use of their face or voice.

“Being able to communicate with people without speaking is really hard, but it’s something needed for the job,” Miller said.

Despite these challenges, Roar-ee remains a campus celebrity, and it isn’t just the people in the costume that appreciate what Roar-ee does. According to dance team captain Karolina Kaczmarczyk, CC ’21, Roar-ee serves as another way to gain more attention and exposure for spirit groups like the Columbia University Dance Team and the Columbia University Marching Band.

“Now that people associate us with dancing with the mascot, we get a lot more recognition. People really enjoy when we perform with Roar-ee because it’s amusing to see a mascot perform the same routine as dancers. When we’re with Roar-ee at basketball games it attracts a lot of people because they want to take pictures with us and Roar-ee,” she said. 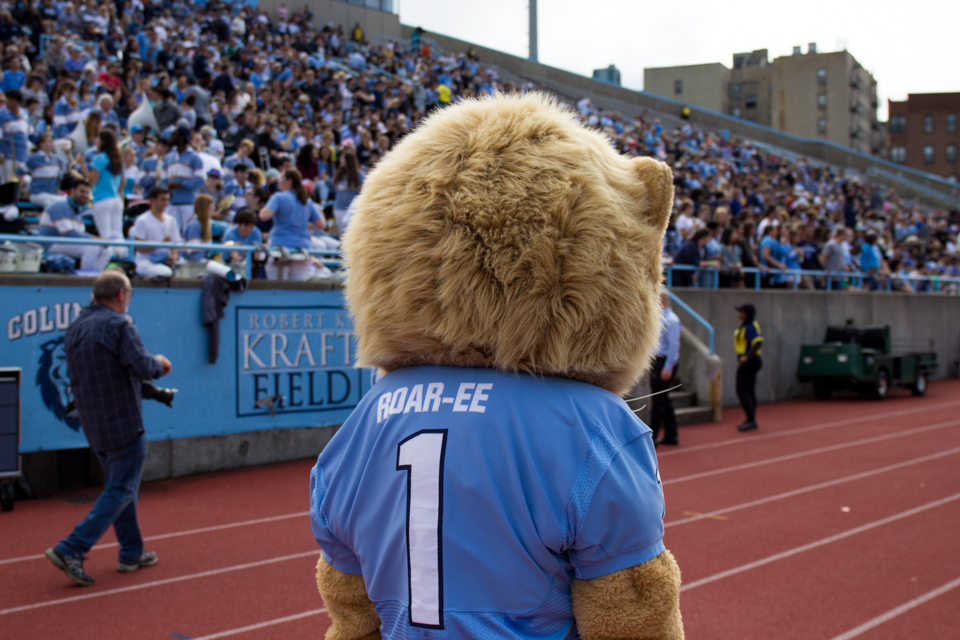 As one of the most beloved parts of Columbia Athletics, Roar-ee holds an immense responsibility that transcends traditional athletic performance. Given their unusual position on campus, however, some Roar-ees question how much their own identity and beliefs should interface with the Roar-ee character.

“One of the Roar-ees took a knee in solidarity with Colin Kaepernick,” a former Roar-ee said. “I go back and forth on that issue because while I, ironically, stand with taking a knee, as the mascot there is a sense of self you are forfeiting. When I was in the costume, I was engaging in space at Columbia differently than I do usually.”

Politics aside, Roar-ee’s presence on campus only continues to grow, especially with the recent success of the football team.

“When we had that winning season, it was really cool to see the entire community come together. I think Columbia doesn’t really have that same experience as many other colleges. We really only have Bacchanal and Glass House Rocks for events that students regularly attend. It was really great to see people that experience that is such a large part of other schools’ culture. It was amazing to give people that experience,” a current Roar-ee said.

Being Roar-ee defines one’s Columbia experience just like being a student-athlete or part of any other club or organization. The same former Roar-ee met his ex-girlfriend, a fellow Roar-ee, while on the job. Though the roar-mance ended, the memory of being Roar-ee often remains prominent in the minds of those who have held the position.

“I’ll see alumni, and they’ll come up to me and tell me about when they were Roar-ee years ago, and it really becomes part of your Columbia experience,” a current Roar-ee said.

Columbia’s athletic culture is changing. Last season, the men’s basketball team played at Madison Square Garden, which one Roar-ee referred to as “something that would not have happened without the shift in Columbia Athletics.”

As Columbia continues to strengthen its reputation as an athletic force instead of solely an academic institution, Roar-ee is emblematic of that school spirit. At a university that is known for its stress culture, a current Roar-ee couldn’t help but claim that Roar-ee is the antithesis of that image.

“Roar-ee is the contrast to the Starving Lion. The Starving Lion is so serious because we are hungry for knowledge and Roar-ee is just this pile of fur that is slowly falling apart, but he’s still happy, he’s still trying his best,” they said. “In a weird way, that emulates the Columbia experience. It’s not perfect, sometimes it’s really scary, sometimes you look at it and say, ‘That’s really old, that needs to be fixed,’ but still it’s an experience that you want to have. That’s the beauty of it; it’s the unending optimism under questionable circumstances.”

There will be new people in the Roar-ee costume next year, and new people after that, but the figure of Roar-ee is unchanging.

Miller said it best: “Roar-ee provides a constant face of Columbia Athletics. There’s always change with our student-athletes: They’re here for four years, and then they graduate, and new classes come in. Athletes graduate, but there’s always Roar-ee.”