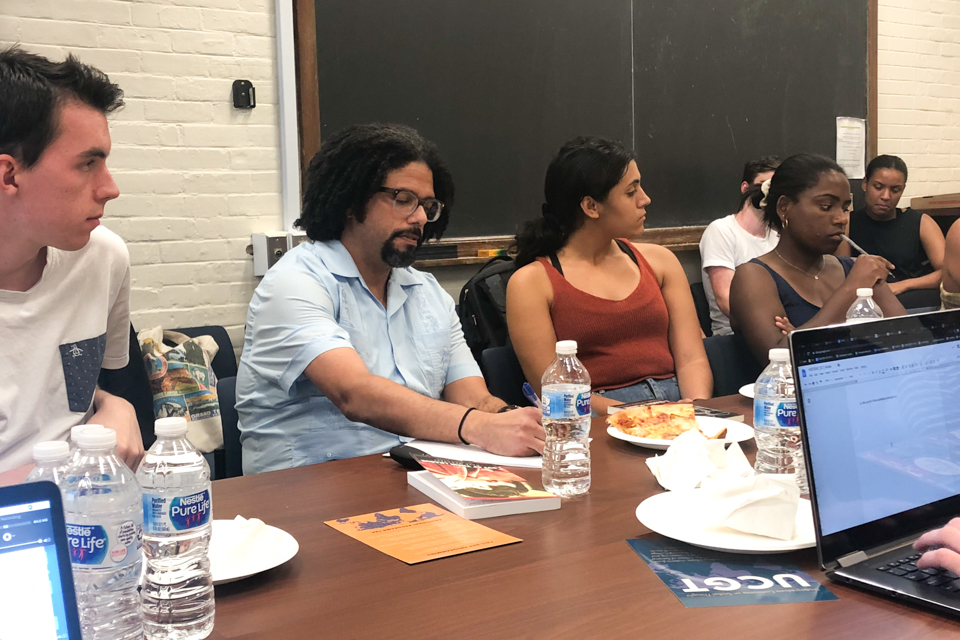 Professor Frank Guridy (second from left) gave a talk called "Sports and Politics in a Time of Political Polarization."

In a talk organized by the Undergraduate Committee on Global Thought on Monday night, Frank Guridy, a professor of sports history and of the history of the African diaspora in the Americas, made the case that sports play a central role in political movements. He drew connections between activism and sports using historical references, such as Muhammad Ali’s refusal to enlist in the Vietnam War, and more modern examples, like Colin Kaepernick’s protest during the national anthem, to illustrate the impacts that sports have had on the American political dialogue.

Speaking in front of about 30 students at a talk titled “Sports and Politics in a Time of Political Polarization,” Guridy described the role sports has played in both unifying and dividing Americans during moments of political crisis. While the focus of Guridy’s speech was on national political movements, he also recognized that sports have the potential to positively affect change at Columbia.

Over the course of his talk and subsequent Q&A session, Guridy made clear that the role of sports in shaping American politics cannot be ignored.

“I still believe … that sports retain the power to transform society, because it has done that in other moments in this country and other parts of the world,” Guridy said.

Those transformative events include John Carlos and Tommie Smith raising their fists in protest at the 1968 Summer Olympics, Billie Jean King’s role in helping launch women’s professional tennis, and the negative impact that “megaevents” like the World Cup have had on political economies. Guridy also cited the financial effects stadium construction can have on urban centers.

“We think about the way city economics have changed over the last 25 years. Sports have been a major part of that in the proliferation of stadium construction in cities—looking at the way they are seen, not just as sports venues, but as economic generators,” Guridy said.

In addition to discussing the role sports play on a societal level, Guridy wants to explore potential ways to reimagine sports at Columbia, focusing on how the athletics department can contribute to a more equitable world. In an interview with Spectator after the event, Guridy said Columbia should do more with its unique position in Ivy League athletics.

“Ironically, because [Columbia] is not an athletic powerhouse, it presents certain possibilities,” Guridy said in an interview after. “Given that the academic enterprise is still taken seriously by student-athletes, this raises all kinds of possibilities to think about the relationship between scholarship and athletic labor and the relationship between athletics and the institution.”

One event Guridy sees as having the potential to explore this relationship is the upcoming panel discussion “Roar, Lion, Roar: A Celebration of Columbia Football," which marks the opening of an exhibit on almost 150 years of college football in the Rare Book & Manuscript Library on Oct. 17. For Guridy, Columbia’s historically mediocre football program makes this discussion an opportunity to talk about something more interesting than records or accolades.

“You’re not going to celebrate wins and losses, so what are you going to celebrate? That’s an opportunity,” Guridy said. “We can’t sit here and talk about how great our legacy is, but that’s alright; we don’t have to. We can think about the impact of sport on a whole different level beyond wins and losses. That seems like a really interesting conversation.”

While Guridy thinks that opportunities to explore alternative ways of structuring collegiate athletics start from administrative discussions, he encouraged students at Columbia to challenge their preconceived notions of the effect sports have on society.

“I think part of the work here is convincing other students that athletics are meaningful and worthwhile,” Guridy said. “The primary thing here for me is to disrupt [the] assumption that the Ivy League student, who is an elite person in society, really shouldn’t care about this at all because it’s not that important. I think it’s really important to a lot of different things that we think about around here.”

To Guridy, this importance is constantly on display in the world of sports. He pointed to the United States women’s national soccer team as an exemplar of a team that made a positive impact on society.

“Sporting performance allows us to visualize the possible,” Guridy said at the event. “When Megan Rapinoe does what she does, she’s not just scoring goals, she is articulating with her body a sense of aspiration and possibility as a queer woman, doing what she does on the pitch. It’s a very powerful symbol for the country that’s very important to account for.”