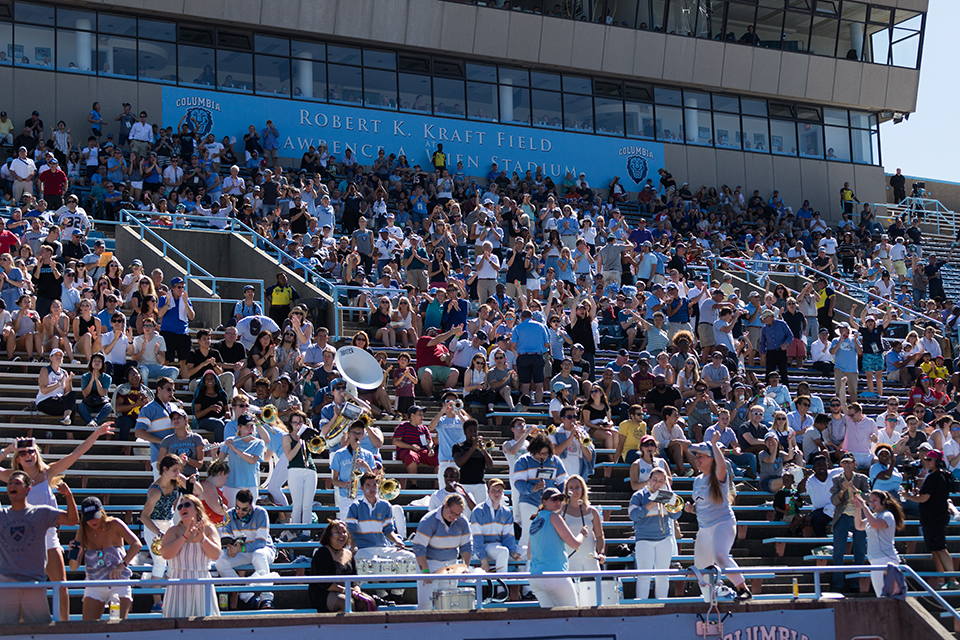 The university cited the band’s inability to register under a student governing board and gain official club recognition as the reason that they will no longer receive funding.

Three days before the football home opener, Columbia Athletics announced in a statement that the Columbia University Marching Band will be prohibited from performing at all future athletics events.

CUMB has found itself in tension with Columbia administrators for years, with the conflict coming to a peak when it defied orders and held Orgo Night inside Butler Library in fall 2017. After being threatened with sanctions, it held Orgo Night outside Butler the next spring. But in October 2018, CUMB was informed that a large portion of its budget, specifically funding from Columbia College and Columbia Engineering, would be cut starting this academic year, a decision which many band members believed to be a punishment for Orgo Night.

In light of the impending loss in funding, administrators in Undergraduate Student Life advised the band to seek recognition from a student governing board. In its statement, the University cited that the band failed to meet the established deadlines to apply for recognition.

Spectator has since learned that Athletics administrators informed the band last fall that their funding from Athletics would also be removed if they failed to become a recognized student group.

In a meeting on Wednesday between Athletics Director Peter Pilling, Associate Athletics Director Bob Steitz, Executive Director of Student Engagement Josh Lucas, CUMB Head Manager Cameron Danesh, CC ’20, and CUMB Drum Major Max Bohn, CC ’20, administrators informed the band that it would not be able to perform at events, and confirmed that its funding from Athletics would no longer be provided.

Additionally, according to Danesh, the band was informed that any individuals who brought instruments to games would be in violation of Ivy League regulations and put under individual sanctions subject to Dean’s Discipline.

In an email to band members regarding future steps, Danesh outlined that CUMB “will no longer exist in any official capacity” and that its board is “weighing all possible options.”

A number of current band members and alumni have since lamented the loss of the band on social media, citing CUMB’s community as a source of comfort both for the Columbia community and the band itself.

CUMB social media manager, Maria Pondikos, BC ’22, said she was in her lab section when she received Danesh’s email.

“I was shocked, and as it continued to register for me, I felt continuously frustrated. And that barely covers the minimum of how I feel,” she said.

Pondikos said that being a part of the marching band was the only reason she felt comfortable playing music, and that it provided her with a sense of community on campus. In addition to her board member responsibilities, she was the leader of the high brass section.

“We could always count on each other and that’s not going to end, but our capacity as a marching band is over for the near future,” she said.

Moving forward, Danesh said one option the band is considering is going to the office hours of the Activities Board at Columbia in October and petitioning to become recognized under a student governing board.

“But the band will not disappear. We’ll still be here, just not at the football stadium. The show must go on, the band will continue to play,” Danesh said.

In lieu of a marching band, Athletics plans to hire community music groups to perform at home events this semester.