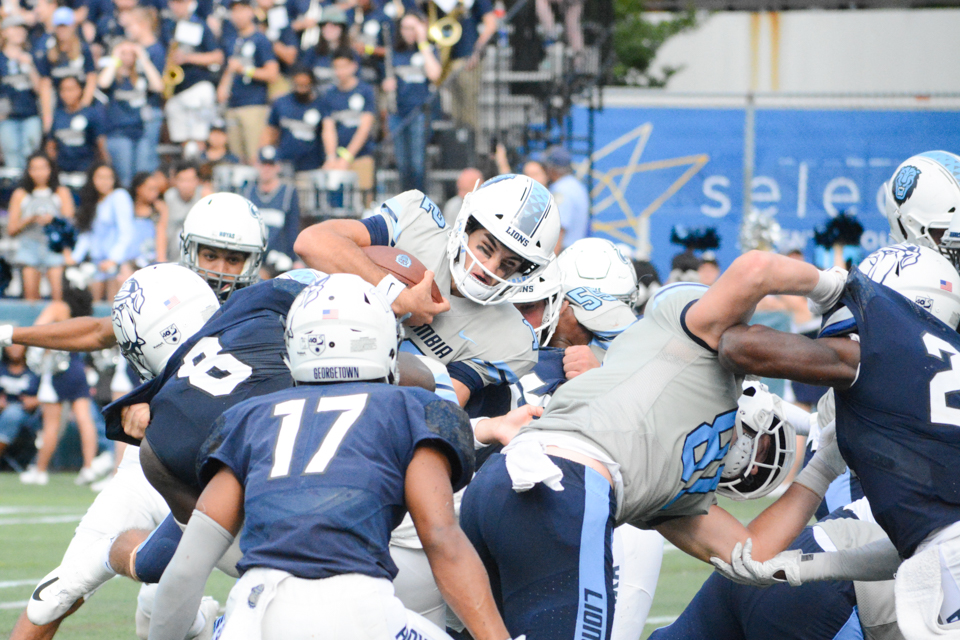 The Columbia Lions will play their first home game of the season against Georgetown (2-1) this weekend in the fifth consecutive iteration of the Lou Little Cup.

Coming off of a 31-14 victory over the Saint Francis Red Flash, the Lions (1-0, 0-0 Ivy) are looking to start off a third consecutive season 2-0 against a Hoya team that is fresh off of a bye week.

This game will serve as a litmus test for how this year’s team compares to last year’s squad, as it faces a Georgetown team that is largely the same as when Columbia bested the Hoyas 23-15 last season.

The Hoyas return seven starters on offense, including quarterback Gunther Johnson as well as their top rushing and receiving threats from last year—Herman Moultrie III and Michael Dereus. The Georgetown defense, which finished 15th in the FCS last year by allowing 21.2 points per game, returns eight of its 11 previous starters.

In last season’s matchup, Columbia’s defense stifled the Hoyas, preventing them from scoring in the first three quarters. The Lions were led by dominant performances from sophomore defensive lineman Ogonna Oraedu with 1.5 sacks, and junior defensive end Daniel DeLorenzi with 2.5 sacks. DeLorenzi’s contribution also included a strip-sack in the third quarter, which led to a Columbia field goal. Perhaps more impressive than the sacks is the fact that the Lions held Georgetown to 25 yards on the ground. Both Oraedu and DeLorenzi are returning this season.

If Columbia’s first-week matchup is any indication, the Hoyas, who are averaging 44 points per contest in their three games this season, should be getting ready for the same stifling defense they faced last year. After allowing two fluke touchdowns in the first five minutes of their matchup against Saint Francis University, the Light Blue’s defense tightened up and did not allow the Red Flash to score a single point in the final 55 minutes.

Roussos earned Ivy League Special Teamer of the Week after collecting 149 all-purpose yards, including a 56-yard punt return touchdown in the fourth quarter. Schmid also reminded everyone why he was an All-Ivy League selection a year ago by landing four punts inside the 20-yard line, with three inside 10 yards.

Perhaps more impressive than both of these performances was the debut of the Lions’ newest placekicker, first-year Alex Felkins. Felkins was named the Ivy League’s Rookie of the Week for his performance against Saint Francis, where he converted a 50-yard field goal, the third-longest in program history, as well going four for four on extra point attempts. Felkins, however, doesn’t pay attention to the record books.

It will also be important to see how head coach Al Bagnoli manages the quarterback position. In the win against Saint Francis, junior Josh Bean and sophomore Ty Lenhart split time at the position. For Bagnoli, splitting the time, at least early in the season, is a necessary aspect of managing a position that constantly dealt with injuries last season.

“We’ve got some past health issues, so I think we always are trying to build in some contingency plans … it’s our way of trying to take some big hits off of the quarterback,” Bagnoli said.

While the goal of keeping the quarterback healthy is an important one, constantly coming in and out of the game makes it difficult for a quarterback to establish a rhythm. This lack of consistency seemed to impact Bean more than Lenhart in the opener; Bean went 11-22 for 78 yards, an average of 3.55 yards per attempt, while Lenhart went 5-8 for 101 yards, averaging 12.625 yards per attempt and adding a touchdown on the ground as well. For Lenhart, who is listed as the team’s backup, approaching every game the same way helps him stay ready for every situation.

“It’s definitely tough but over the years I’ve definitely gotten a lot better at it. It’s just staying mentally focused and it definitely goes in your game prep,” Lenhart said. “Going into a game you got to act like you’re the starter no matter what.”

Kickoff is scheduled for 1 p.m. on Saturday at Robert K. Kraft Field. Bagnoli is hoping that the student body will show up to support the Lions because, as he puts it, “They’re one of you. Hopefully, they’re going to get involved in anything on the hall or [in] the dorm and hopefully you get involved in what they do on Saturday afternoon.”