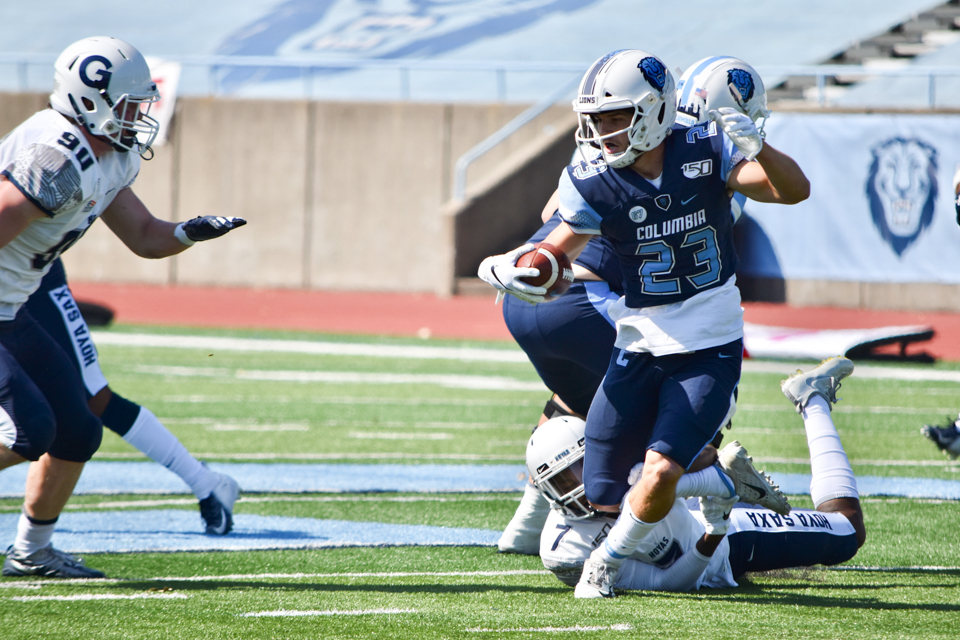 “Disappointed.” That was the first word Bagnoli uttered when discussing the Lions’ first home game of the season, a game in which Columbia fell to the Georgetown Hoyas 24-10 as the Lions’ offense struggled to generate any positive momentum. The loss ended an eight-game winning streak against non-conference opponents for the Lions.

While the loss is certainly disappointing for a team that entered the season with high expectations, losing to a Patriot League team means that the Lions’ chances of winning the Ivy League remain unchanged. At least, this is how senior linebacker and captain Michael Murphy is approaching the loss.

If the Lions are going to achieve the goals they have set for themselves, the offense is going to have to be better than it was on Saturday.

Early on, it did not look like the Lions would have trouble on that side of the ball, as the Lions opened the scoring on their second drive of the game. On that drive, the offense started with great field position after sophomore wide receiver Mike Roussos broke a tackle for an 18-yard punt return that got the Lions started at midfield. The Lions were quick to take advantage, showing off the effectiveness of their dual-quarterback system, as junior Josh Bean and sophomore Ty Lenhart threw passes of 24 and 20 yards, respectively, to set the Lions up at the 1-yard line. From there, Roussos took the snap as a wildcat quarterback and scored his second rushing touchdown of the season.

After this fast start on offense, the Lions were stymied for the next 37 minutes, failing to score again until a fourth-quarter field goal ended the drought. The offense could not find any rhythm, and nowhere was this more apparent than at the quarterback position. After going 7-for-8 for 63 yards in the first quarter, Bean went 2-for-9 for 18 yards over the next two quarters. Lenhart was not much better in his limited passing opportunities, and the two combined for five turnovers on the day.

For head coach Al Bagnoli, the problem was not so much with the quarterback play as it was with the offensive line.

“Our protection kind of broke down. They played a little bit harder, were able to squeeze the pocket,” Bagnoli said. “We just didn’t hold up as well as we are capable of holding up or need to hold up in certainly those situations.”

That lack of protection resulted in Columbia’s quarterbacks getting sacked four times on the day, two of which were strip sacks that led to Georgetown fumble recoveries. While the pass rush was a major factor in the Hoyas’ ability to force turnovers, its defense was dominant in more ways than one The Hoyas held the Lions to 30 yards on the ground on 35 carries, for an average of 0.9 yards per carry. To put that in perspective, the Lions averaged 3.0 yards per carry last season. Perhaps more impressive than their success on defense was the fact that the Hoyas played such stout defense while having to cycle through more defenders than head coach Rob Sgarlata had planned.

“We played about 26 kids on defense today. … For us, it’s a next-man-up mentality” Sgarlata said. “For me, that was great to see our defense step up and just answer the bell no matter what they were asked to do.”

Despite the fact that it surrendered 24 points, the Lions’ defense was able to slow down a Georgetown offense that, through its first three games, was averaging 44 points and 238 rushing yards. The Lions held the Hoyas to 67 yards on 37 rushes in this game, in large part due to the strong play from the linebacker duo of sophomore Cam Dillon, who finished with 10 tackles, and Murphy, who had 9.

While Murphy performed well overall, there was one play he was definitely unhappy about after the game. On third-and-goal from the Lions’ 7-yard line and with the game tied in the second quarter, Georgetown quarterback Joseph Brunell tucked the ball and tried to run in for a touchdown after being unable to find an open receiver. Murphy forced Brunell out of bounds before he could reach the end zone, but the referee flagged Murphy for a questionable late hit penalty. This gave the Hoyas a first down from the 3-yard line and running back Herman Moultrie III punched the ball in on the next play. While the play was certainly questionable, Murphy took full responsibility for the penalty after the game.

“That’s a tough penalty,” Murphy said. “I was just pursuing as much as I could, running my tail off trying to take that quarterback down. I left my feet and maybe should not have. … It’s a really tough call right there but I just got to get better and make smarter decisions moving forward.”

The Lions believe that getting better starts on the practice field, and said that a sloppy week of practice was a big reason why they did not play their best in this game. Bagnoli recognizes that this is his responsibility and he is determined to be a better leader going forward.

“It falls on me, it falls on our coaches, and it eventually gets to our kids, but I’m not certainly putting the blame on anybody else but me,” Bagnoli said. “I’ve got to do a better job of preparing our team and getting our kids ready to go.”

We will see if the Lions are able to get better prepared next week as they face their first Ivy League test next Saturday at 1 p.m. when they travel to Princeton to take on the Tigers.