Marching band reinstated one day before Homecoming, to play at Penn game

Marching band reinstated one day before Homecoming, to play at Penn game 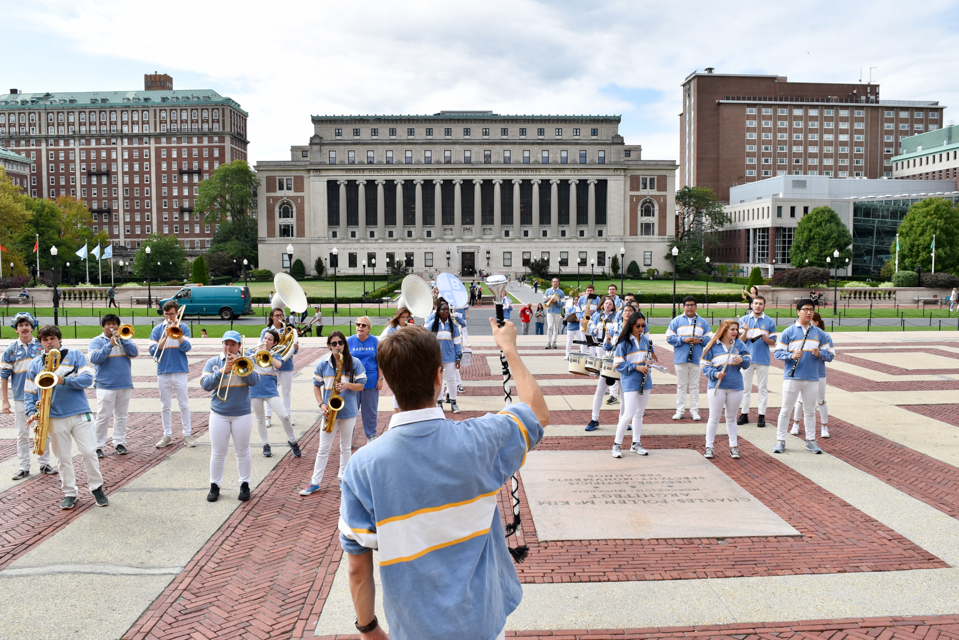 The Columbia University Marching Band will perform at Homecoming on Saturday.

This is a developing story, check back for updates.

Less than one month after being banned from playing at all athletic events, and just one day before Homecoming, the Columbia University Marching Band will once again be able to perform at games after the establishment of a newfound partnership with Columbia Athletics, the University announced on Friday.

The band was officially banned from playing at athletic events on Sept. 25, just three days before Columbia football’s home opener. The ban followed CUMB’s loss of all University funding after it was informed by administrators last fall that it would no longer receive financial support starting this academic year if it did not become a recognized student group. The band failed to meet the established deadlines to seek recognition from a student governing board last spring.

The band responded to the ban by playing shows on Low Steps each week ahead of football games and continuing to travel to football games sans instruments. In lieu of funding from the University, the marching band began its own fundraising effort on GoFundMe and raised more than $25,000 in just five days. The donations primarily came from band alumni.

According to a statement from the University, the band will be under the supervision of Athletics and subject to a code of conduct. The statement added that Columbia College “will guide the band on traditions outside of athletic contests,” but did not elaborate on what this “guiding” will look like or how this will affect traditions like Orgo Night. In the statement, a quote from University President Lee Bollinger explained that the reinstatement of the band came after two weeks of meetings between band representatives, Dean of Columbia College James Valentini, and Athletic Director Peter Pilling.

“The Columbia University Marching Band has been a University tradition for over 100 years. It is my strong hope that this tradition continues for the next 100 years and beyond,” Bollinger said.

“We all understand that it’s important for the band to improve its musicality and maintain its traditional satirical approach while also being respectful in its words and actions,” Rowan said.

In an interview with Spectator, Danesh said that this means that the band will no longer need to seek outside funding or recognition as an official student group as it will now exist under the umbrella of “spirit groups,” like the dance and cheerleading teams. Spirit groups receive funding from Athletics for uniforms, travel, equipment, and in the case of the band, possibly a new music director.

Danesh cited alumni involvement as a key reason why he believes Athletics overturned its decision.

“General Columbia community members really came to the table and said they wanted us to play. They donated to the GoFundMe, they called administration. It is only with this support would we be able to play at Homecoming tomorrow,” he said.

For members of Columbia football, both past and present, the presence of the band is an important one for the program.

“Having a connection between the marching band and the student body is important for Columbia football. It’s good to have them there,” former defensive back and two-time football captain Landon Baty, CC ’19, said at the opening of the “Roar, Lion, Roar” discussion on Thursday, an event that celebrated the legacy of Columbia football and featured a panel of alumni players.

CUMB will begin its Saturday performances with a field show aptly titled “The HomeCUMBing Field Show” at Low Steps at 11 a.m. The band will then perform in the stands with its instruments at the Homecoming game against Penn at 1:30.