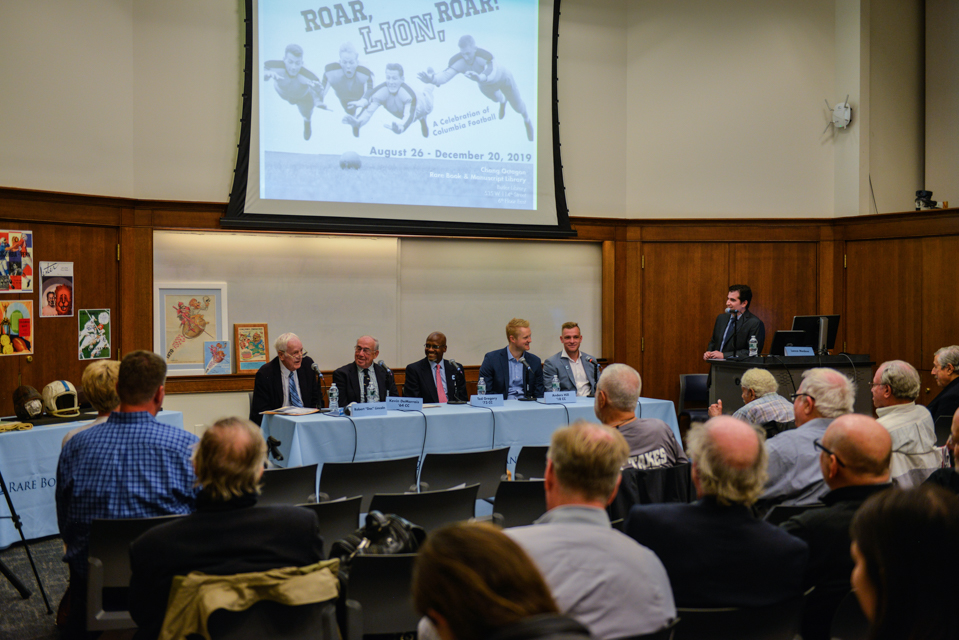 Butler Library played host to a panel discussion featuring five Columbia football alums to mark the opening of an exhibit on the history of the football program in the Rare Book & Manuscript Library.

While Butler Library is a treasure trove of stories and traditions, some of the tales shared at the Oct. 17 “Roar, Lion, Roar” panel discussion and reception highlighted a topic more commonly associated with Baker Athletic Complex: Columbia football.

The event marked the opening of an exhibit in the Rare Book & Manuscript Library and was highlighted by anecdotes from storied matchups and recollections of icons of Columbia football, dating back to 64 years before Butler was built. Lance Medow, the radio and television play-by-play announcer for Columbia Athletics, moderated the event. The hour-long panel was punctuated by memories from Robert “Doc” Lincoln, one of two living players from the 1947 football team; Kevin DeMarrais, a CC ’64 graduate who spent 19 years as Columbia’s Sports Information Director; Ted Gregory, one of the best defensive backs in Columbia history, radio announcer, and member of the Columbia Athletics Hall of Fame; Anders Hill, CC ’18 and quarterback who was a semifinalist for the national Bill Campbell Trophy; and Landon Baty, CC ’19, an All-Ivy defensive back.

A projector flashed black and white photographs, including an image of a ticket stub from the historic 1934 Rose Bowl in which Columbia defeated Stanford and team pictures from Columbia archives. (One photograph depicted a 1921 Columbia/NYU football game held on South Field when the helmets were still made of leather.) Medow turned to Lincoln and DeMarrais to help set the stage for the football program’s oscillating history: When Columbia abolished football in 1905 amid concerns about safety, it became difficult to build long-lasting traditions.

“For the first 10 years we were back, we really didn’t play an ambitious schedule,” DeMarrais said. “We did not build the kinds of rivalries other teams have.”

Rivalries, a key element of most sports, is a component many feel is missing from Columbia’s football program. The Ivy League is not devoid of such matchups, as Harvard-Yale is often considered one of the nation’s most storied rivalries. But as evidenced by the variety of answers from the panelists, it is difficult to point to any one rival for the Light Blue that transcends generations.

“We didn’t discriminate at all. We wanted to kick the hell out of everybody,” Lincoln, who played on the 1944, 1946, and 1947 teams, said. When asked if there were any distinct rivalries currently, he added, “It’s very hard to build a new-old tradition. It just doesn’t happen.”

For the closest thing to a rivalry for the Lions, Gregory pointed across the river to Princeton. His sophomore year the Lions beat the Tigers 22-20, he said, snapping a 45-year losing streak against the New Jersey Ivy for the Light Blue.

More recently, Penn has been singled out as Columbia’s primary target. Hill said the rivalry “has a special place in my heart and always gets me fired up.” And it’s for good reason—it was in the 2017 Homecoming game against the Quakers, when Hill lofted an overtime pass to then-sophomore receiver Josh Wainwright to secure a 34-31 win and maintain their perfect record.

Baty concurred that the 2017 Homecoming game “sparked a flame in the alumni and the fans,” but another part of the rivalry, he said, is due to coaching. Head coach Al Bagnoli spent 23 years at Penn before arriving at Columbia five years ago to try to turn the tide for a program that consistently finished at the bottom of the Ancient Eight.

“For a long time, we didn’t believe. We didn’t believe we were going to win,” Baty said. Bagnoli, he explained, changed that. Over the past few years, Baty has begun to believe that the Columbia football program has earned some respect back.

“It was a whole culture shift starting from the day [Bagnoli] came in,” Hill said. “Every single game we played, every workout we had, we just believed a little bit more.”

The next step for revitalizing the program seems to be getting the crowds to believe in the Lions as they did in previous years. Lincoln shared a story about his father attending one of his football games as a Lion and being offered $100 in 1940s’ money for two tickets. At that time, Lincoln said Columbia football games could draw up to 52,000 people.

DeMarrais added that as fan support waned, so did the media’s coverage of the Light Blue. He cited an excerpt from an article published in the New York Journal American just after Columbia beat Stanford in the 1934 Rose Bowl. DeMarrais said that the piece “shows the love affair” between the New York press and Columbia football.

“Back then, we would have great coverage in the New York media, but it has changed radically since then,” DeMarrais said.

Despite the media and the fans’ diminished support over the years, the panelists have maintained a belief in the program even decades after they hung up their jerseys. Lincoln outlined many life lessons he gleaned from his time spent on the field.

“Readjusting your goals. Sacrifice,” Lincoln said. “And they say all this head-hitting is bad for you, but hell—I made it through Harvard.”

After reminiscing about the 1947 win over Army, which, according to Medow, snapped the Army’s 32-game winning streak and praising the philanthropic and spirit of Bill Campbell, the group moved to the sixth floor of Butler to view the archival display entitled “Roar, Lion, Roar: A Celebration of Columbia Football.”

Ensconced in such a historic library, it seems only fitting that one of the final questions Medow posed to the panelists was about balancing academics and football. How did these athletes maintain the precarious balance between the sport and performing well academically at a rigorous institution? For Lincoln, it was always a tough decision.

“In my life, football was always very close to number one,” Lincoln said.