“A festival of rowing”: Lions take home top-five finishes and renewed sense of community at Head Of The Charles regatta

“A festival of rowing”: Lions take home top-five finishes and renewed sense of community at Head Of The Charles regatta 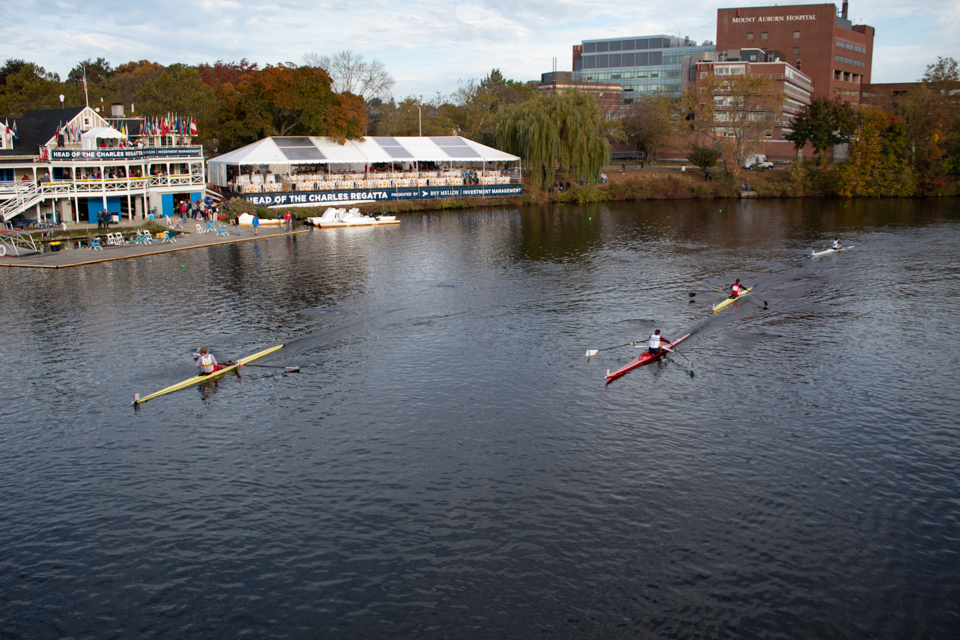 The day was beautiful, crisp, and picturesque. A gentle breeze ruffled the water of the Charles River as the autumn sun illuminated the historic Eliot Bridge. However, the fall quiet was broken by a man in a Massachusetts Institute of Technology Crew cap, whipping his arm from side to side and screaming down at the river, “Coxswain! Hard to port! Turn, turn, turn!”

Then a pause. A scraping noise, like nails on a chalkboard. The man chuckled, yelled louder,

A gaggle of college students in USRowing sweatshirts burst into whoops and cheers as the boat smashed its oars into the side of the bridge. The coxswain, in charge of steering the boat, took too wide of a turn, and the unforgiving course made his boat pay the price.

Chip Smith, whose son races on the Columbia lightweight rowing team, found the intensity of both the spectators and the races to be chaotic in the best way.

The thousands in attendance seemed to share Smith’s sentiments. The trails of Boston were crowded with throngs of people in classically preppy attire—plaid scarves, puffy vests, trench coats—intermingled with dozens of abnormally tall people in colorful unisuits, printed with everything from school colors to unicorns. These individuals furiously refreshed their phones, waiting for results.

This is the Head Of The Charles Regatta, the largest two-day rowing race in the world, which brings rowers, from high schoolers to past Olympic medalists to 75-year-old veterans, together to race, heckle, network, and party.

“This is a pretty incredible regatta,” heavyweight men’s coach Scott Alwin said. “It’s a festival of rowing as much as anything else.”

While these results are impressive, they are not necessarily indicative of results in the spring, the real crew season. The Head Of The Charles is around 5,000 meters long, a 5K in rowing parlance, much longer than the Ivy League and NCAA championship distance of 2,000 meters. Because of the length of the race and its early time—five months before the Ivy rowing season in March—the results at the Charles are often less memorable than the environment at the race itself.

“It’s a fun race to come to,” lightweight men’s coach Nich Lee Parker said. “It’s an experience I think every rower should have. But for us, it’s really about … building a good foundation and learning where we are, so that we can do all the right things to do better when it really counts.”

The lightweight men competed against each other and other collegiate crews in the men’s lightweight four, which involves four rowers, four oars, and one coxswain. Surprisingly, the team’s first-year boat finished third of 16, while the upperclassmen boat finished hot on their heels, coming in 1.7 seconds and one place behind them.

For the lightweight team, the Charles is important primarily as a check-in point against its competition before it begins its journey to reclaim its title this spring. The lightweights won the Eastern Association of Rowing Colleges (EARC) Sprints, the Ivy League championship race, in 2018, the first title of any Columbia rowing team.

The heavyweight crew came into the Charles with a different goal in mind. Alwin said the team did “zero” formal practice in their Charles boats because they were small sculling boats, where each rower has two oars, and the Light Blue races larger sweep boats, with one oar per rower, in the spring. For the heavyweight squad, the Charles is mainly important as a motivator for summer training. The Lions finished seventh of 17 in the championship doubles, two rowers with two oars each, and 12th of 26 in the club single.

“We created some incentives for these guys to train harder, earlier,” Alwin said. “And we rewarded the guys that did well by bringing them along. … I’m really proud of the way they raced and the result they got.”

For the women’s team, whose senior rowers finished third in the championship four, this year’s Charles was a celebration of the evolution of the team’s senior class. Coach Emerson Curry said that this class was one of the best he’d seen as a coach because of their leadership and temperance, despite low expectations and some “abysmal” first-year rowing machine performances.

“I don’t think anybody saw this class as a particularly strong class on paper when they were recruited,” Curry said. “[Astrid Walker-Stewart, who rowed in this Charles four] wasn’t in any of the top racing boats or the NCAA boats her freshman year. And then each year she’d come back a little smarter, a little stronger.”

The women’s team, which has never won an Ivy League championship, is looking to channel Walker-Stewart’s approach this year. Curry said he hopes to improve the team’s times by four to seven seconds over last year’s times, when the Lions finished seventh at the championship, nearly 30 seconds behind first place.

“They’ve taken a lot of beatings in their history,” Curry said. “And I don’t know that a lot of other athletes would have been able to come back from that. So to that extent I’m excited to go to the line with them, because I’ve seen how they respond to defeat.”

But no matter the projected rankings at May’s Ivy League Championships, the Head Of The Charles Regatta provides rowers with a sense of community and two days filled with people from around the world united by the sport. Lions can leave the concrete jungle and enter a world where spectators crowd over bridges to watch them race, where the river is at the heart of the city and everyone speaks their language.

“Realistically, no one in New York knows anything about rowing,” Curry said. “It’s nice for them to see that there’s such a culture to it. … I think it’s sort of cool to show up and give it a go against a whole big community of people, and just sort of appreciating it and being appreciated. I think they have a blast when they come here.”

Staff writer Clara Ence Morse can be contacted at clara.encemorse@columbiaspectator.com. Find her on twitter at @ccemorse.