Lions head to New Hampshire to take on No. 16 Dartmouth in crucial Ivy contest

Lions head to New Hampshire to take on No. 16 Dartmouth in crucial Ivy contest 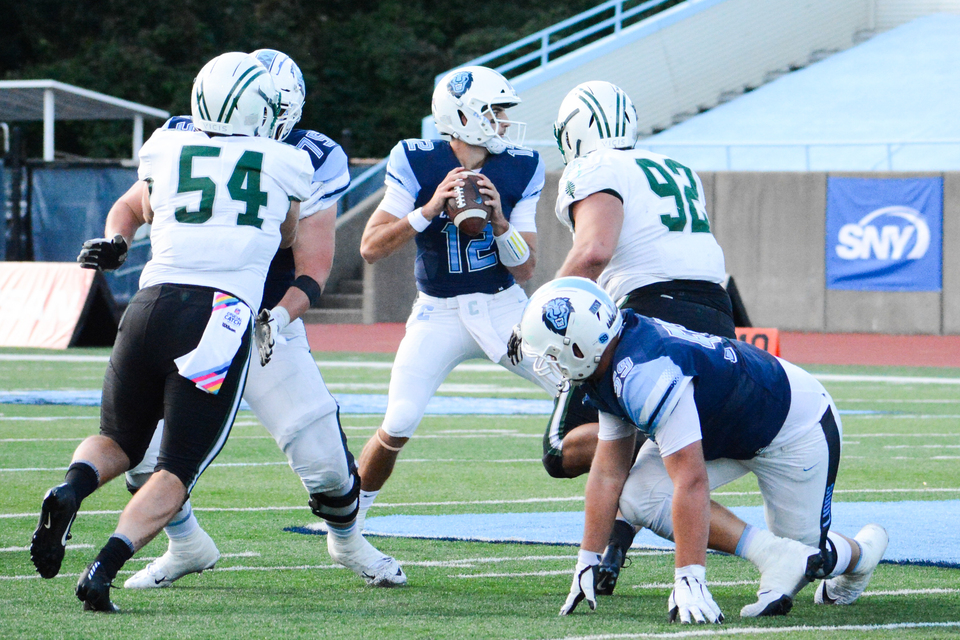 Coming off a 44-6 blowout win over Penn, the Lions will look to defeat Dartmouth who currently sits at a 5-0 record.

Despite being only five games into the season, the performance of the 2019 Lions has varied so much that one might wonder whether head coach Al Bagnoli is trotting out the same squad each week. Despite the wide spectrum of performances from the Lions over the course of the season, the roster has remained almost identical since September, outside of a few injuries here and there. Now, the main question heading into the team’s week six matchup against the 16th ranked Dartmouth Big Green is not so much who will be playing, but rather which version of the Light Blue will turn up in New Hampshire this Friday?

With its season teetering on the brink of disaster, Columbia (2-3, 1-1 Ivy) snapped a three-game losing streak against Penn in last week’s 44-6 homecoming blowout victory, the largest win in the tradition’s 75-year history. A triumph over an undefeated Dartmouth team this week would rapidly propel the Lions back into contention for the Ancient Eight crown. While the win against Penn breathed new life into the team, Bagnoli is not taking anything for granted.

Bagnoli is focused on making sure the Light Blue work hard this week because beating Dartmouth (5-0, 2-0 Ivy) will require the team to be firing on all cylinders.

Dartmouth’s undefeated record and national ranking have come after a few impressive wins against teams both inside and outside the Ancient Eight. The Big Green has outscored its five opponents by a total mark of 192-41. Perhaps no win was more impressive than the team’s 42-10 trouncing of preseason Ivy League favorite Yale. The Big Green was led by a tri-pronged attack at quarterback, as Dartmouth consistently cycles through three different players under center, Jared Gerbino, Derek Kyler, and Jake Pallotta. While this strategy has proved successful for the Big Green, a similar quarterback-splitting tactic used by Columbia has come under scrutiny, particularly in light of the results at Homecoming.

Over the first month of the season, the Lions split field general duties between junior Josh Bean and sophomore Ty Lenhart. However, Homecoming marked the first game in which Lenhart not only started but also played every down on offense for the Light Blue.

While Bagnoli said the decision was made in part to give Bean a chance to get healthy after getting “banged up” in the early part of the season, the impacts of the change were swift and obvious. In last week’s rout over the Quakers, Columbia rushed for 255 yards after totaling only 183 yards over its three-game losing streak. Lenhart’s 95 yards and two touchdowns on the day were a large part of the Lions’ success on the ground, as Lenhart’s constant rushing threat opened up holes for the Lions running backs and wide receivers.

Despite the Lions’ success under Lenhart, Bagnoli plans on returning to the two-quarterback system the team used in the first month of the season.

“We’re going into it with the idea that both will play,” Bagnoli said. “They both have had good weeks. I’ll leave it at that.”

Regardless of whether it’s Bean or Lenhart at quarterback, finding the same success on offense will be no easy feat against a Dartmouth defense loaded with star talent. Coming into the season, the unquestioned leader on defense was cornerback and 2018 Ivy League Defensive Player of the Year winner Isiah Swann. While an injury kept Swann out for the first three weeks of the season, he made his debut two weeks ago against Yale and figures to play a bigger role in this match than he has all season. In Swann’s absence, linebacker Jack Traynor has stepped up for the Big Green, winning Ivy defensive player of the week twice this season already. While Bagnoli described the Dartmouth defense as “a challenge,” he is more focused on what the Lions can do than what the Big Green will do to them.

“For us, it’s really all about us. We can’t worry about those guys,” Bagnoli said. “We’ve got to worry about us improving. Just keep doing the things we do. Keep getting better collectively, individually, and that will give us our best chance to win.”

On the other side of the ball, Columbia’s defense is tasked with slowing down a methodical Dartmouth offense that is greater than the sum of its parts. While the Big Green does not have anybody averaging over 50 yards per game or a quarterback averaging 150 passing yards this season, they are first in the FCS in completion and third-down conversion percentages.

The Lions will travel to New Hampshire to take on Dartmouth with kickoff scheduled for 6 p.m. on Friday. The game will be aired live on ESPNU, Columbia’s only game aired live on an ESPN linear network.