After a solid start, Lions give up 42 unanswered points in 59-24 loss to Dartmouth

After a solid start, Lions give up 42 unanswered points in 59-24 loss to Dartmouth 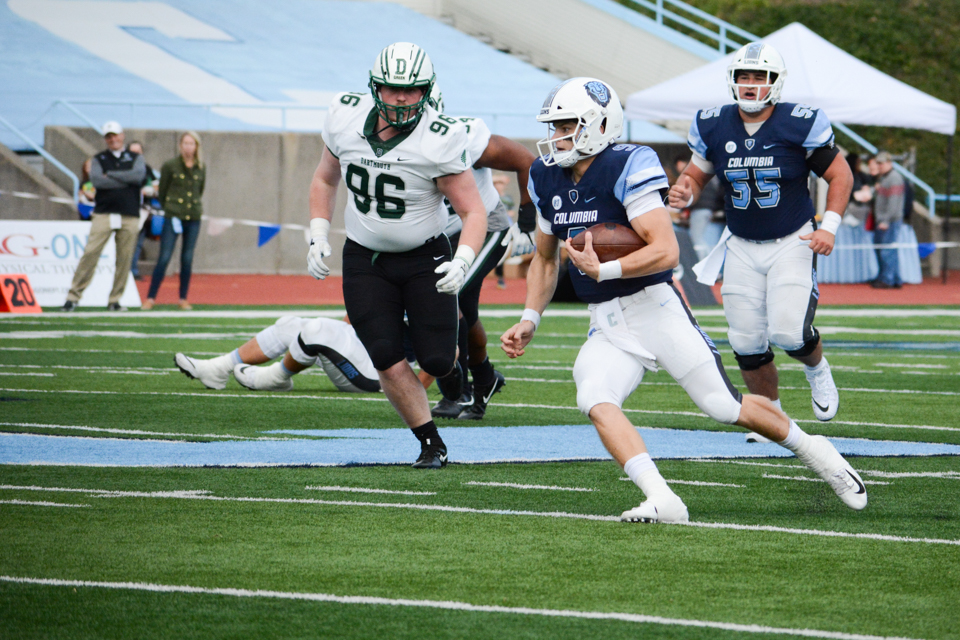 Despite an attempt at a comeback in the second half, Columbia could not overcome Dartmouth’s 42 unanswered points, falling 59-24.

The Lions knew going into the game that it would be a tough matchup with the current Ivy League-leading Dartmouth Big Green, so Columbia put up a competitive effort—for the first 21 minutes. Over the last 39 minutes of the game, Dartmouth scored 42 points before the Lions were able to get back on the board in the closing minutes of a 52-24 loss.

While Columbia (2-4, 1-2 Ivy) finds itself with a losing conference record after the defeat, both of the team’s losses have come against the league’s top two teams, as Princeton and Dartmouth (6-0, 3-0 Ivy) are the only teams in the Ancient Eight without a loss this season. For Columbia to secure its third consecutive winning season for the first time since 1945, the Lions will have to win each of their four remaining games this season, which is a surprisingly realistic possibility considering the team’s record.

Columbia started the game out strong, forcing the Big Green into a three-and-out on its first offensive drive. When Columbia got the ball on offense for the first time, sophomore quarterback Ty Lenhart took the field with the starting offense for the second straight week after serving as junior Josh Bean’s backup for the first four weeks of the season.

On this drive, Lenhart demonstrated his abilities both in the air and on the ground by rushing for a 13-yard first down before finding senior receiver Josh Wainwright for a 32-yard completion. Wainwright found himself wide open when Dartmouth captain and 2018’s Bushnell Cup Award Winner Isiah Swann slipped and fell to the ground. The Lions were able to march 59 yards to the Dartmouth 6-yard line before being forced to kick a 25-yard field goal, which first-year Alex Felkins nailed to go up 3-0 early. Felkins’ field goal accounted for the first points Dartmouth has surrendered in the first quarter this year.

Later in the first quarter, with the Lions punting from their own 44-yard line, Dartmouth wide receiver Drew Estrada fielded a punt at the 13-yard line. After breaking a tackle by junior linebacker Carson Powell, the shifty Estrada found a hole and broke through the Columbia special teams to return the ball for an 87-yard touchdown to put the Big Green on top. For head coach Al Bagnoli, this return marked a turning point in the game for the Lions.

“We obviously started the game OK and then things unraveled really quickly,” Bagnoli said. “It probably started with the momentum shift with the punt return. Next thing you know, against a really good team at home, you find yourself a lot further down than you thought you should’ve been at that point in time, and that’s a credit to them.”

While the punt return may have changed the tone of the game, the Lions answered with a touchdown of their own: Lenhart reconnected with Wainwright for a 10-yard touchdown catch to tie the game with 8:58 left to play in the second quarter. However, this would prove to be the high point of the game for the Lions, as Dartmouth found the focus that has helped them achieve a perfect record. Over the final seven minutes of the first half, the Big Green scored 28 unanswered points and the Lions went into halftime with a 38-10 deficit.

The Big Green dominated the game during its run at the end of the second quarter. Whether it was their five-play, 75-yard drive or Swann baiting Lenhart into throwing an interception, which he promptly returned for a touchdown, the Lions could not stop the Dartmouth onslaught. Bagnoli said he never experienced a game like this, saying, “It just got away from us so fast.”

Dartmouth carried its momentum into the second half, starting with the Lions’ first offensive drive. On third-and-5, Dartmouth’s First Team All-Ivy League defensive lineman Jackson Perry forced Lenhart to fumble and Dartmouth quickly pounced on the loose ball. The Big Green quickly capitalized on the Lions’ turnover: Dartmouth ran a reverse to quarterback Derek Kyler who then found Caylin Parker streaking down the sideline for a 33-yard touchdown, giving the Big Green a 45-10 lead.

Despite the seemingly insurmountable deficit, the Lions continued to play through the end of the game. At one point in the third quarter, the Lions even scored two straight touchdowns to cut Dartmouth’s lead to 28 points—but it was not enough in the end.

The upside for the 2-4 Lions is that their schedule only gets easier going forward. Dartmouth and Princeton are the only two undefeated teams left in the Ancient Eight, and the Lions just happened to have both in scheduled early in conference play.

“I obviously think they’re the two premier teams in the league and unfortunately we’ve played both,” Bagnoli said.

Perhaps now that they have played with the best, beating the rest will not be quite as hard.