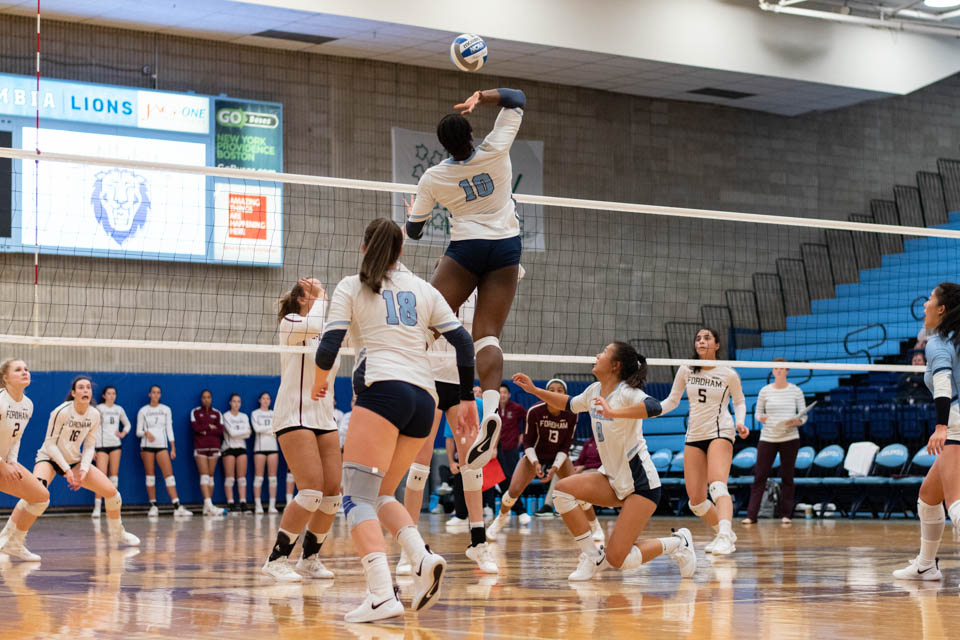 90% of the Lions' kills come off the hands of either Ikwuazom or Cheng.

The ball seems to be floating. Junior setter Audrey Cheng sends it spinning slowly toward the center of the court and steps away. All eyes are on senior middle blocker Chichi Ikwuazom, who takes one step before exploding into the air, arm raised. The gym holds its breath. Ikwuazom swings and smashes the ball through the arms of the blockers, off the hands of the defense, and out of play. Kill by Ikwuazom—game over.

Cheng leaps into the air and screams loud enough to be heard at the top of the bleachers. Ikwuazom grins and pumps her fist in their air. The bench pours onto the court for hugs.

This win is a milestone for Columbia volleyball—the Lions have matched last year’s win total not even halfway through conference play. The kill is mundane for the Light Blue, but still breathtaking: Ikwuazom forcefully puts down a ball from Cheng an average of 18 times a game. The play’s frequency often defines the team’s success.

So far in the 2019 season, 43 percent of Columbia’s kills have come from Cheng assisting Ikwuazom. An astounding 90 percent of the Lions’ kills come off the hands of either Ikwuazom or Cheng. These statistics are extraordinary.

The pair has come a long way from 2017 when Cheng assisting Ikwuazom made up only 19 percent of kills. Back then, Cheng was a fiery, technical setter who stepped into the first setter role less than halfway into her first-year season. Ikwuazom was a powerful but shy middle blocker, known more for her blocking than the killing ability that has now come to define her; she was still playing second string to then-senior, all-conference outside hitter Anja Malesevic, CC ’18.

When Cheng came to Columbia, she had little experience setting to Ikwuazom’s position in the middle of the court since hitters on the court’s outside dominate offense on almost every team. Cheng had to adjust to target the middle, which is now often their go-to play. And as Cheng learned to set to Ikwuazom, and Ikwuazom stepped up to dominate offensively, Columbia reworked its offensive structure to run what coach Allison Keeley calls “the Chichi show.” This unique approach has brought success for both the team and Ikwuazom herself.

“[As a first-year] I wouldn’t even think to look for my middle, I’d just be like ‘outside [hitter],’” Cheng said. “But now it’s the opposite. Now I’m just looking for Chichi. … Every time we dig or pass the ball, I’m like, ‘Where’s Chichi?’”

Ikwuazom is a powerful hitter with the ability to break blocks and a propensity for bouncing volleyballs off players’ faces for kills, so dominant that opposing teams cheer when they are able to merely return one of her attacks. Ikwuazom is nationally ranked in hitting percentage, total points, points per set, total kills, and kills per set. She is third in kills per set; no other middle blocker in the nation appears in the top 50.

Ikwuazom’s turning point as a leader came last year, according to Keeley. The team was losing a game, and Ikwuazom was struggling to keep the ball in play. Then Keeley gave her a piece of advice that completely changed Ikwuazom as both a player and a leader: You don’t have to cheer, but you can energize the team by leading with your smile.

“[Ikwuazom] goes out of the time out, she hits the ball into the bleachers, and turns around and goes—” Keeley flashed a huge ear-to-ear grin and a thumbs up. “And from then on, she just took off, just somehow changed her confidence. … We asked her to lead with her smile, and as long as Chichi is smiling, things are good.”

And while Chichi smiles, Cheng cheers. As a setter, she is one of the team’s most vocal leaders, calling the plays and passing the ball. The relationship between a setter and a blocker requires mutual awareness, trust, and confidence. It is one Ikwuazom and Cheng have taken to the next level—and one that their coach finds inspiring and moving. Keeley lights up when she talks about their playmaking skills, gasping in mock disbelief and surprise at the high-energy kills they attempt.

“Audrey is just a super competitive person, so it’s just very easy for her to inspire Chichi and to get her going,” Keeley said. “You’ll see her before the play like ‘Chichi, now, go now!’ Chichi says, ‘Okay, I’ll go! You’re my buddy. I’ll do it for you.’ ... After the point, too, she’s the first person to celebrate.”

The friendship, in addition to both players’ individual efforts, has lifted the team to new heights this year. Cheng recorded Columbia’s first triple-double in over a decade early this season, with 47 assists—including 21 to Ikwuazom—13 kills, and 12 digs. Ikwuazom put down 29 kills, the fourth-most in Columbia history, twice in one week this season. But even when the team is slumping, their friendship provides a reminder not to pressure themselves too much.

“Before one of the games this past weekend, I was struggling with finding the ball and making solid contact,” Ikwuazom said. “But from knowing that our relationship is strong and can weather anything, I was able to check back in, like, ‘The connection will find itself, will work itself out.’ And it did.”

Ikwuazom led both matches that weekend in kills, recording 14 in a 3-0 win against Harvard and 19 in a 3-1 win against Dartmouth. Cheng, who is third in the Ivy League in assists per set, faces similar pressures to perform. Precisely because they can be the keys to the Lions’ on-court success, both players can take losses and underperformances very personally.

“Sometimes it’s like, ‘Oh my gosh, I just messed up, and I just let down Chichi and the team,’” Cheng said, laughing. “But I normally don’t think like that unless I really messed it up on a really important play.”

This drive to pursue excellence is the key to this year’s brand of play. It is the reason why the young and rebuilding Lions have risen to 10 wins and currently sit in the top half of the conference. This differs from past years, according to Ikwuazom, as the team struggled to establish a culture of accountability.

After spring meetings with players to discuss their goals for the 2019 season, the Lions decided to focus on raising the level of competition and responsibility. Accountability has been a major focus at practices this year as Keeley has called for athletes to critique their teammates after plays go wrong, offering technical suggestions, and sharing their thoughts.

“We wanted to change our team culture, and competitiveness, and commitment to the program in general,” Cheng said. “It’s definitely different than past years. ... You have to find the balance between the family and we’re super nice to each other, versus you need to be able to hold someone responsible and accountable.”

With only 10 returning players and nine first-years this season, the Lions had to instill this culture while helping new teammates adjust to the athletic pressures of Division I volleyball and the academic pressures of Columbia. This process takes time, but Ikwuazom and Cheng’s on-court play gives the team breathing room to develop their new players and culture. Their close friendship exemplifies the team goals; they are disciplined athletes with a plan, who also eat, watch films, and hang out together.

“Our team talks about love and excellence as our two values,” Keeley said. “The love is, ‘It’s my buddy. We’re having fun, we’re doing this together,’ and then the excellence is, ‘We have a plan.’ So the more we communicate, and the more we know we can count on each other, the more successful we’re going to be, and the better our experience is going to be.”

But with only six games left this season, six games of college volleyball left for Ikwuazom and six games of the Chichi-Audrey partnership for the team, Keeley knows her team will miss their dynamic when Ikwuazom graduates. However, the culture of success Cheng and Ikwuazom have established will continue.

“They’re two of the most fantastic people that I’ve ever worked with, and they work harder than anybody I’ve ever worked with,” Keeley said, eyes wet with tears. She paused for a moment, looking up at the ceiling before continuing. “It’s really a joy to coach them and to watch them play.”