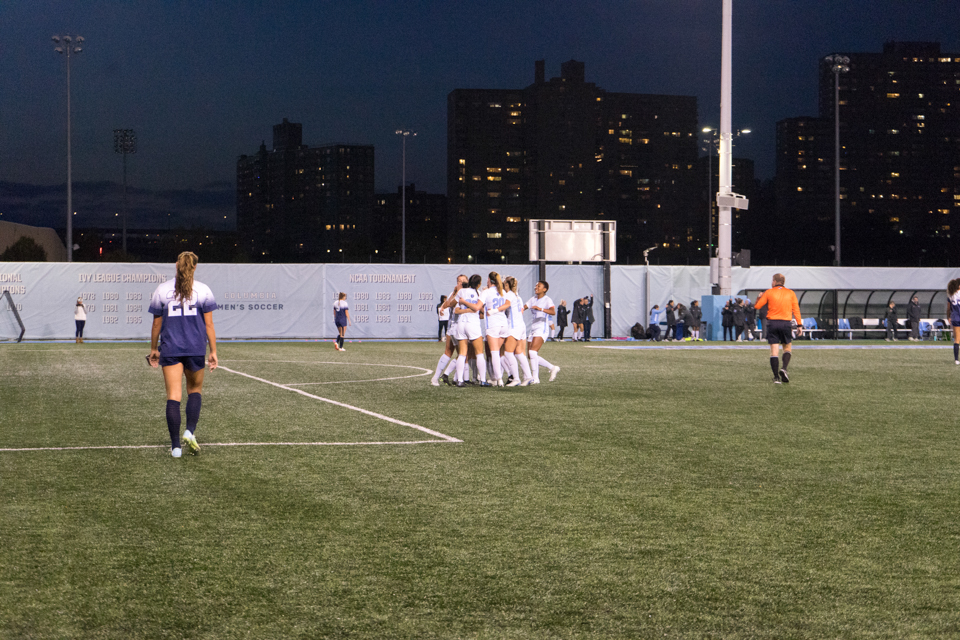 This win marked only the second time women's soccer has recorded three goals over an Ivy opponent.

Coming off of two consecutive away draws, women’s soccer ruined Yale’s title dream with a 3-1 victory at home. The Lions’ offense seemed to be rejuvenated, scoring more than one goal in Ivy Play for the first time since the 2-0 win against Cornell on Sept. 28, five games ago.

In fact, since coach Tracey Bartholomew came to Columbia, the Lions had only averaged 1.05 goals in conference games before Saturday's three-goal performance. The game marked only the second time the team has put three goals into the net of an Ancient Eight team, the first being two seasons ago against a Dartmouth team that finished 1-6 in the Ivy League.

While Columbia’s offense was the driving force for the Lions, Yale’s defense was not at its best on Saturday. Yale had only allowed two goals in total against Ivy League teams before Saturday night, fewer than declared Ivy League champion Brown, which has conceded three total goals to Ivy League teams. Before the match against the Lions, The Bulldogs had yet to allow three goals in a single game this season, but they conceded twice against Columbia just on goalkeeper errors alone. Yale barely escaped giving up more goals with the help of an offside call and a Lions’ shot that hit the crossbar.

Bartholomew described the offense as “electric,” a rather back-and-forth battle in the midfield turned into a fast-paced Columbia offensive show in the last 15 minutes of the first half. At the 35th minute, senior forward Emily Koe seized the opportunity given by Yale’s keeper Alyssa Fagel’s failed clearance to capture her second goal in two games. Less than two minutes later, senior full-back Amalya Johnson initiated an attack up the right side of the field, and though first-year forward Ally Clark put the ball past the goalkeeper, a close offside call on sophomore forward Kayla Lee saved Yale from being suddenly down two-nil.

To finish the half, senior forward Bailey Peacock gained a one-on-one chance with the keeper off of sophomore forward Mallaika Tomar’s counter-attack run from the Lions' penalty box, but unfortunately for Peacock—who is still looking for her first career goal—the ball went past the goalie but hit the woodwork.

Bartholomew attributed the burst of momentum to the team’s overall good performance, but emphasized the performance of the substitutes. “We had some great players, not only starters playing well, but also off the bench that really … came in and energized us. We just kept the pressure on, and, you know, it’s hard to handle pressure,” she said.

The Lions continued to harass the goal as soon as the second half started. Less than six minutes in, junior forward Jordyn Geller—who has been quiet for the past two weeks—received the cross from first-year forward Shira Cohen, and with an acrobatic turn of her body, volleyed a bullet into the top left corner of the goal to give the Light Blue a two-goal advantage. Yale’s defense seemed to still be unable to find its rhythm after the goal, as at the 58th minute, Yale’s right back Reina Bonta half-heartedly passed the ball back to Fagel, and Cohen intercepted the ball to score on the empty net.

Geller and Cohen have been crucial to the Lions’ offense this year, scoring three and four goals respectively. Geller remarked that the two of them “up top together create so many opportunities for the team, and it’s a really good spark that [they] have with each other.”

Columbia’s defense made Yale uncomfortable as well. Coming into the game averaging 2.07 goals per game, Yale barely managed to squeeze one goal onto the scoreboard. Throughout the game, Johnson was able to contain the Bulldogs’ first-year sensation Ellery Winkler, who leads Yale with six goals and six assists. Johnson made life difficult for Winkler as she pushed her wide on the left side the majority of the game.

Bartholomew said after the win that it was a “big deal” to score three goals on Yale, and the resiliency that the team showed was phenomenal. “The seniors and the leaders on this team were like ‘no, we’re going after this,’ and, you know, for our young kids to experience that, that’s a major lesson, [and] that’s awesome,” she said.

This win gave the Lions a major boost to chase their first 10-win season since 2008. “I think you have to feel confident from what happened,” Bartholomew said. She was very proud to see the players’ effort against a Yale team that was “having an unbelievable year.”

Columbia plays Harvard on Nov. 9 at 5 p.m. to cap off the season at home. The game will also be broadcasted on ESPN Plus.