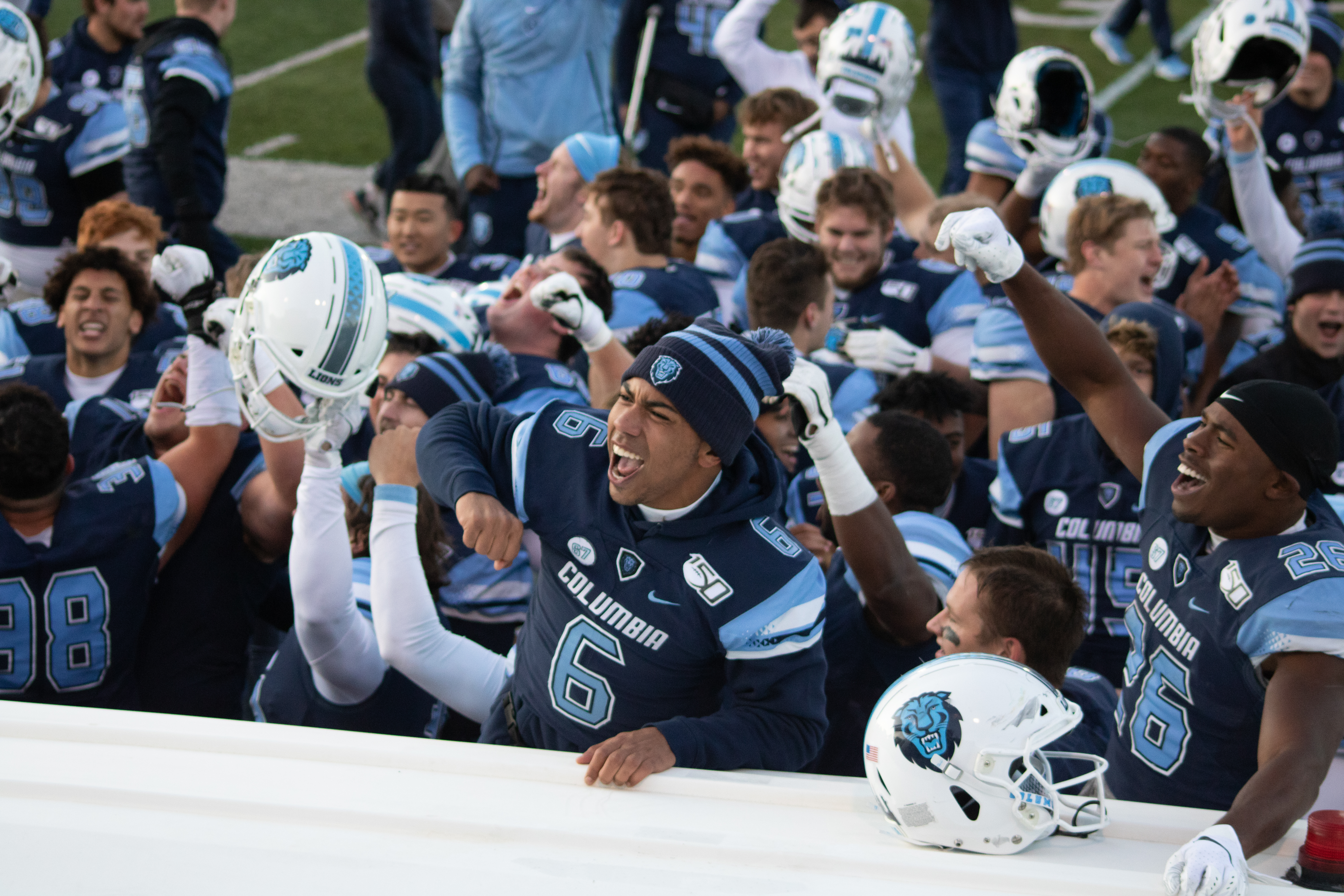 The Lions celebrate after their 17-10 overtime win over Harvard.

This was the game the Lions have been waiting for all season.

The past few months have been filled with disappointment for football, but today was different. Columbia beat Harvard in dramatic fashion on Saturday, winning 17-10 in overtime on a walk-off interception by junior safety Ben Mathiasmeier. The win marks the first time the Lions have defeated Harvard since Nov. 8, 2003.

The win is a rare high point for a team that has dealt with adversity through the first seven weeks of the season. After the game, head coach Al Bagnoli emphasized how much he feels this team deserves a moment like this.

“I was really happy for our kids who’ve really played exceptionally hard recently and really had very little to show for it,” Bagnoli said. “So congratulations to them and I couldn’t be more happy.”

On the Lions’ first offensive drive, Bagnoli made clear that the team was going to take an aggressive stance on offense. After starting the drive on its own 46-yard line, Columbia went for it on fourth-and-2 from the Harvard 46-yard line. A designed quarterback draw looked as if it would get the Lions the necessary yardage for the first down, but Harvard punched the ball out of sophomore quarterback Ty Lenhart’s arms and the Crimson recovered to take back possession.

Harvard was quick to capitalize on the Columbia turnover, needing only three plays to march to the Columbia 22-yard line. From there, Crimson quarterback Jake Smith dropped in a perfect pass over the head of sophomore cornerback Fara’ad McCombs into the outstretched arms of Harvard’s James Batch to put the Crimson up 7-0.

The Lions put themselves on the board midway through the second quarter. After starting with the ball on their 25-yard line, the Lions moved down the field methodically, using 11 plays to put themselves at the Harvard 4-yard line. On the ensuing play, sophomore receiver Mozes Mooney found himself wide open in the end zone. With two defenders bearing down on Lenhart, he nearly overthrew Mooney, but the receiver made a miraculous, one-handed diving catch to tie the game 7-7. For Lenhart, the play was all about trust between him and his receiver.

“I trusted Mo to be in the spot and he ran a great route, just trying to put the ball out there; he made a great catch,” Lenhart said.

Late in the second quarter, it looked like Harvard had a chance to take the lead going into halftime. Facing fourth and-1 on the Columbia 33-yard line, Smith dropped back and threw a pass, looking to connect with Harvard’s leading receiver Cody Chrest. However, senior cornerback Ben McKeighan broke up the pass, causing a turnover on downs.

While the play was a crucial one in the course of the game, the breakup also marked an important milestone in McKeighan’s career, as he broke the program record for career pass breakups with 24. For Bagnoli, this record-breaking performance is a result of McKeighan’s ability to step up whenever he is called upon.

“He’s played really well,” Bagnoli said. “People have tested him. You go back to the Penn game, this game, and he’s done a really good job of sitting on an island and holding his own.”

The third quarter was mostly quiet, as both sides failed to score and combined for four punts. It was not until the end of the quarter that either side’s offense came to life, as Harvard drove 52 yards to the Columbia 8-yard line, setting itself up for an easy 25-yard field goal at the start of the fourth quarter.

On the ensuing drive, it appeared the Lions had an opportunity to score as they found themselves at second-and-7 from the Harvard 25-yard line. Lenhart dropped back to pass and tried to squeeze a ball into double coverage, but the ball got picked off by Harvard safety Max Jones.

The Lions bounced back quickly with an 11 play, 39-yard drive that ended with a 26-yard field goal. Neither side was able to score again in regulation, and the game went to overtime.

In overtime, the Lions got the ball first and struck quickly. Lenhart found senior tight end Rory Schlageter for a 25-yard reception to put the Lions at the goal line. From there, Bagnoli went with the Lions’ go-to goal-line play with sophomore receiver Mike Roussos lined up as the quarterback in shotgun. Roussos received the snap and dove in easily for the score.

Harvard got the ball back needing to score a touchdown of its own. However, Mathiasmeier made sure not to let that happen. As the Harvard quarterback dropped back to pass, Mathiasmeier made a beeline to the receiver and undercut his flag route to make an incredible, game-sealing interception. While the play displayed impressive individual talent from Mathiasmeier, he was sure to distribute credit to throughout the defense.

“I think it’s a testament of what our defense has been about,” Mathiasmeier said. “Every time we come out, we have a chance to win, and today, the D-line put immense pressure on the quarterback which made a major impact.”

All week heading into this game, the Lions said their motivation was to give the seniors a win against the only Ivy League team they had not bested in their four years here. Now that the game is over, Lenhart was proud to have accomplished what he set out to do.

“It’s probably the best feeling I’ve had since I’ve been here for those guys,” Lenhart said. “They built the legacy here and been through so much. I know how much this means to them and, as Coach has been saying, this has been a rough season so far, and to get that means the world.”

With only two games left in the season, there is only so much that the Lions can accomplish. Bagnoli, however, is not going to undersell the importance of a win like this for the Lions this season and beyond.

“I think it gives us a lot of momentum for these last two games to finish off strong and give us a jump ahead into next year, although we won’t go too far into that,” Bagnoli said.