‘One of the best players in the history of this program’: Amalya Johnson finishes a career filled with many accolades and even more memories

‘One of the best players in the history of this program’: Amalya Johnson finishes a career filled with many accolades and even more memories 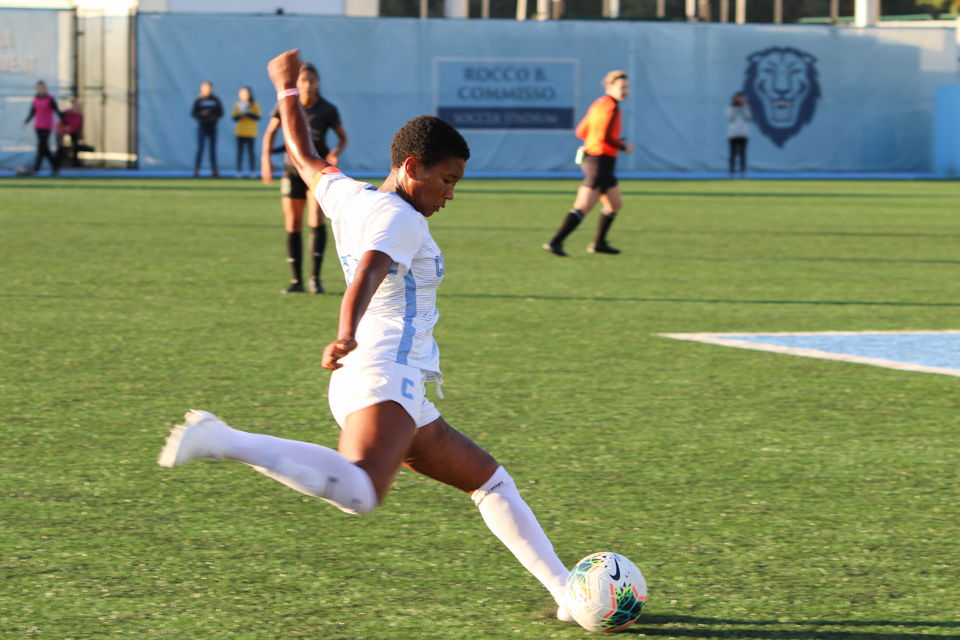 Senior defender Amalya Johnson’s list of accolades is already extensive—and it is only expected to grow now, after another dominant season.

When head coach Tracey Bartholomew first saw superstar senior wingback Amalya Johnson and forward Emma Anderson, CC ’19, go at each other in a club national championship game, she “knew that there was something about [Johnson] that was special.” She was extremely impressed with Johnson’s versatility as a center-midfielder and an outside back and remembered that during a particular game in North Carolina, Johnson dribbled past four opponents in a row.

“I remember walking and seeing [assistant coaches] Josh and Amphone in the hotel room and I was like ‘We need Amalya in the program.’ ... She was a clear ’nother level.” Bartholomew said. “We were fortunate enough that she decided to … take a chance on Columbia.”

Though Johnson had other options, she was set on Columbia early on.

“I thought [Columbia] was the coolest thing in the world. I was so confused because … what is this doing in the middle of New York, and it just seemed like a really special place where I could play really good soccer but then also get a really good academic experience,” Johnson said.

Four years after her fateful decision, Johnson has dominated the pitch at Baker Field, with her impressive career coming to a close last Saturday after the Lions’ final match of the season against Harvard.

Johnson’s journey to Columbia began when she first put on a pair of cleats at the age of three. Her offense developed as she tried to mimic her childhood idol, American soccer icon Mia Hamm. Johnson played center midfield as a young player and her lockdown defense is a manifestation of her precise understanding of soccer.

“I liked scoring goals, and when I was younger, I was faster than everyone ... so that was a lot of fun just running by people,” Johnson reflected. “I stuck with it. … It’s been the biggest part of my life … and it’s always been a source of immense joy for me.”

Since arriving at Columbia, Bartholomew has maintained tremendous trust in Johnson, who has started every single game of her career. Bartholomew admitted that starting Johnson every game is a “big testimony” to the defender’s prowess, as players rarely do so in the Ivy League.

Whatever Bartholomew’s expectations for Johnson were, Johnson’s own expectations were always much higher. Johnson trained so hard both in and out of season that Bartholomew had to tell her to “take it easy” multiple times during the past four years in fear of injuries. Johnson’s hard work has paid off every season, however, as she has grown from receiving an All-Ivy honorable mention in her first year to a second-team All-Ivy League selection her sophomore year and a first-team selection last year.

While Johnson’s work ethic is admirable, Bartholomew claims that the best part about Johnson’s continuous passion for improvement is the impact it has on her teammates.

“She leads by example, and those players go out there for Amalya,” Bartholomew said. “She’s one of the players that has helped put a culture in [the program].”

In her earlier years on the team, her role model was 2017 Ivy League Defensive Player of the Year Natalie Ambrose.

“She was super quick. It was super hard to get by her and she could attack really well. So I always was trying to embody what she was doing,” Johnson said. “She was also a very good leader. Always super positive, encouraging people to their best. That’s definitely something that I’ve tried to embody a little bit.”

For Johnson, playing with an older defender inspired her, and she now works to pass that inspiration on to first-year left-back Maddy McCaw, uplifting McCaw when she feels insecure in her game, mirroring how Ambrose mentored her.

While Johnson and Bartholomew share regrets about some of their heartbreaking losses, they noted that they have had many happy memories.

“There are a bunch,” Johnson said. “Freshman year, beating Princeton was really special. … I had an assist in that game. … And also last year winning in double-overtime against Cornell … was a really good moment.”

Bartholomew labeled the team’s win during Johnson's sophomore season against Princeton—a team that went on to the NCAA quarterfinals—as a high point. Columbia was just one of three teams that beat Princeton that season. While big wins have been important in Johnson’s soccer career, Bartholomew believes that Johnson has contributed even more to the team off the field than on the field.

“I think Amalya’s got friendships for life here … and that’s something that our program’s about, and, I mean, she’s leaving that with the younger kids as well,” Bartholomew said. “When I think about how much we’re going to miss [the senior class], and all of what they’ve brought in day in and day out, it’s a lot to process.”

Johnson herself claimed that being a student-athlete has been the most rewarding aspect of her Columbia experience.

“Being on the team has been my favorite part of being a Columbia student,” Johnson said. “[This team] is always a place where people get better and make best friends.”

Meanwhile, as a student-athlete, Johnson must constantly work to balance her passion for both sports and academics. Bartholomew has always prioritized recruiting players with a fighter’s mentality, choosing players who would be able to wake up at 6 a.m. to practice at Baker and still be in class in the afternoon.

Bartholomew found a perfect candidate in Johnson, who plans to continue her academic pursuits in graduate school to study material science engineering. Bartholomew half-jokingly said that a priceless talent such as Johnson should go into the draft and play professional soccer instead of going to school but wished Johnson all the best in whichever path she pursues.

When asked about who could possibly step into Johnson’s role in the coming seasons, Bartholomew could not give an answer.

“You don’t replace players, you know. I think everyone has their sort of stamp that they leave in a program,” she said. “What Amalya has done here has been remarkable to watch as a coach.”

It would be difficult for Bartholemew to not miss the player whom she described as “one of the best players in the history of [the] program.” In her first three years at Columbia, Johnson was selected to the 2016 TDS National Team of the Week, 2016 All-Ivy League Honorable Mention, 2017 second-team All-Ivy, 2018 first-team All-Ivy, 2018 Academic All-Ivy League, 2018 All-East Region Third Team, and 2018 Scholar All-East Second Team. She remains in the running for even more recognition at the conclusion of this season.

“For her to get the respect and the accolades is well-deserved,” Bartholomew said. “And I know she’s not here to get those; she wants that Ivy title and has pushed this program starting years past. … For me, it’s hard. When you want something so bad and you work at it and you give everything you can to not get it, is one of the hardest things you can swallow.”

Johnson agreed that “it sucks to be leaving without a championship,” but she wrapped up her evaluation on her college career with “I will miss this program point blank, period.”

“You kind of have to be like a parent and let kids go, and at the same time, you kind of wish you could selfishly hold on to players,” Bartholomew said. “But at the same time I think, you know, hopefully, if it’s a good family that you care about, then you do miss it, and we are certainly going to miss Amalya and her classmates without a doubt.”