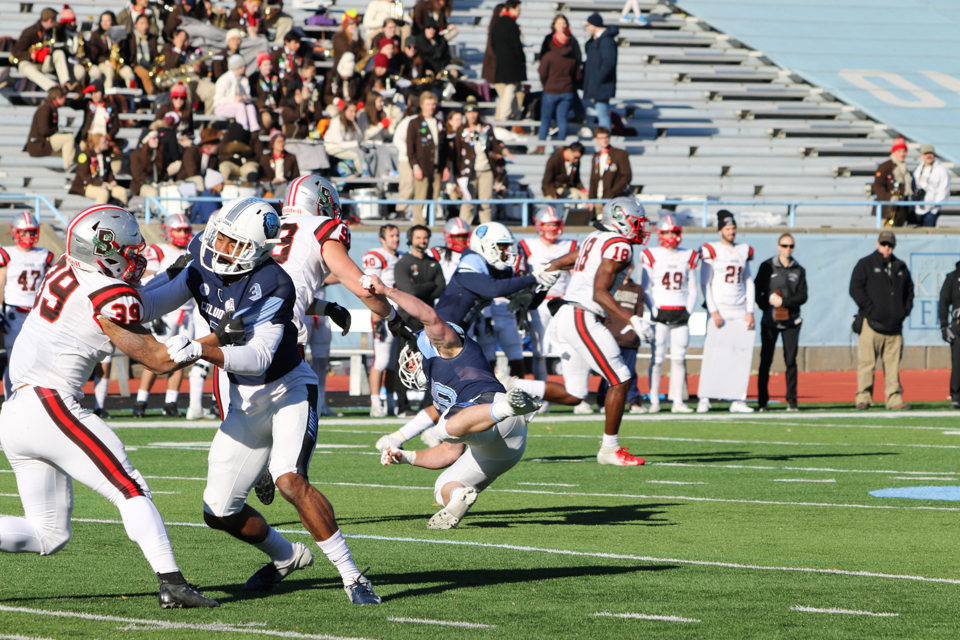 In an all-around disappointing effort, the Lions fell to Brown by a score of 48-24 to clinch a losing record for the season.

In the wake of numerous player injuries, issues with scheduling, and an inability to move the ball downfield at times, the Lions have had their fair share of valid reasons for their 3-5 start to the season. However, the matchup on Saturday was set to be a surefire win for Columbia’s football team as Brown has not won an Ivy League game since the 2016 season.

It was clear from the onset of Senior Day, the last home game of the season, that this would not be the case. While Columbia was able to blow past Brown 42-20 in last year’s contest, the Lions faced an early 21-0 deficit this time around, and despite making the game competitive at times, ultimately fell by a final score of 48-24. As a result, the Lions will finish with a losing record for the first time since 2016. After the game, head coach Al Bagnoli made it clear that this was not the way he wanted to end the home careers for this year’s seniors, his first-ever recruiting class.

“You don’t want your last home game to be played like that. I don’t think if you talk to any of our kids—whether offensive kids or special teams kids or defensive kids—they would agree with that,” Bagnoli said. “It’s not a reflection on all the great things they’ve done and it’s just disappointing from a lot of levels.”

It was a tale of two quarters in the first half as the Light Blue (3-6, 2-4 Ivy) got off to as poor a start as possible. After a 9-yard run by sophomore running back Ryan Young to start the game, sophomore quarterback Ty Lenhart dropped back before escaping the pocket for what looked to be an easy first down. However, the signal-caller was stripped of the ball and Brown’s Nicholas Messina plucked the ball and proceeded to run it back for a touchdown to give Brown (2-7, 1-5 Ivy) the lead only 37 seconds into the game. Bagnoli expressed his frustration with letting Brown get out to such an early advantage.

“You don’t want to give an underdog any more confidence or momentum, and obviously that’s not the way you want to start,” Bagnoli said.

Brown’s offense quickly demonstrated that this was not the same team the Lions went up against last year. On his first offensive play of the game, Brown quarterback E.J. Perry, a transfer from Boston College and the nephew of Brown’s newly-hired head coach James Perry, dropped back to pass and found Livingstone Harriott for a 35-yard post down the middle of the field to put the Bears at the Columbia 29-yard line. From there, Brown needed only three plays before Allen Smith found the endzone to put the Lions in a 14-0 hole.

After the game, Bagnoli described Perry, who finished with at least 300 yards and three touchdowns for the fourth time this season, as “arguably the best player in the league.”

The Lions continued to shoot themselves in the foot in the first quarter, as junior punter Drew Schmid ricocheted a punt off of a teammate to set the Bears up with great field position once again. Brown capitalized off the Columbia blunder, using seven plays to gain the 34 yards necessary to gain a 21-0 lead.

The first signs of life from the Lions came as the first half was winding down. After the Bears turned the ball over on downs, Lenhart completed a 30-yard pass to senior wide receiver Josh Wainwright to give the Lions a first down at the Brown 49-yard line. On the next play, Young took the handoff from Lenhart and broke through the Brown defense for a 49-yard touchdown run, his longest run of the season since his 65-yard touchdown run on the season opener against Saint Francis University.

The offensive surge for the Light Blue did not end there, as Lenhart, who finished the half with 153 passing yards, was able to connect with a streaking Wainwright in the endzone to cut the deficit to only four points. However, before the end of the half, Brown seized an opportunity to score on fourth-and-1 from the Columbia 30-yard line. On what looked like an innocuous inside zone run, Smith broke free for a 70-yard touchdown. Bagnoli said the play was one of a number of plays that stopped the Lions from ever getting the momentum they needed to make the game truly competitive.

If the start of the first half went as poorly as possible for the Lions, their first offensive possession of the second half was the complete opposite. After going into the locker room with some modicum of momentum, Columbia ran a double-reverse flea-flicker on its first play of the half. After the multiple reverses, Lenhart found Wainwright waiting for a screen pass. Wainwright proceeded to race up the sideline for a 44-yard touchdown to bring the Lions within four points once again. After the game, Wainwright made sure to give credit to his blockers.

“The offensive line did a great job of getting out and getting on those blocks,” Wainwright said. “Ty threw the ball under pressure and I was able to make one man miss and go up the sideline and there was really nobody that was pressuring me from that moment on just because all the blocking happened perfectly and it was really just a walk into the endzone.”

However, the Lions’ success was short-lived. Lenhart, who is usually as dangerous on the ground as he is through the air, has struggled to hold onto the ball all season, and today was no different. Entering this game with six fumbles this season, Lenhart added two more to the total. The second came in the third quarter in the shadow of the Columbia endzone. Brown quickly pounced on the ball and drove it into the endzone to extend its lead to 41-24.

The Lions had no more fight left in them as they allowed Brown to score one more touchdown. While the result may not have been what he had hoped, senior linebacker and captain Michael Murphy was still able to reflect on both the good and the bad that he has experienced at Wien Stadium over his four years on the football team.

“I think coming in four years ago, I never would’ve thought that I’d have so many triumphant wins and heartbreaking losses,” Murphy said. “I’m just appreciative in general for the opportunity that Coach and the staff gave me by coming here.”