Bill Campbell gave Columbia his time and money, but his biggest gift was generations of mentorship

Bill Campbell gave Columbia his time and money, but his biggest gift was generations of mentorship 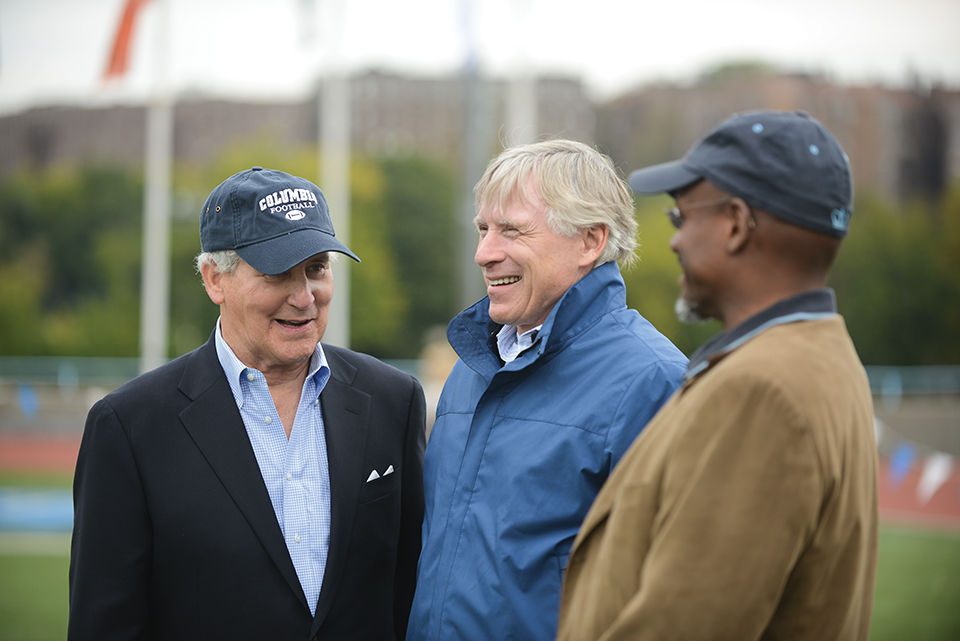 Bill Campbell embodied the adage of leaving things better than you found them. Columbia, Silicon Valley, and the steel mill town of Homestead, Pennsylvania have little in common, but they were all beloved by Campbell, and they all reaped the benefits of his love.

Campbell’s presence in the Columbia community was exceptional, from his undergraduate years until his death in 2016. His history with the Lions is a long and notable one: Campbell, CC ’62, TC ’64, captained the 1961 championship football team during his senior year, served as head coach starting in 1974, and later acted as the glue that brought generations of Columbia football players together.

When Campbell left Columbia as head coach in 1979, he didn’t leave the coaching game; instead, he traded cornerbacks for CEOs. As the “Trillion-Dollar Coach”—a title coined by a best-selling book written about him and published in April—Campbell advised titans of the tech world on leadership and management techniques. Leaders of Amazon, Apple, eBay, Facebook, Google, Intuit, Twitter, and Yahoo all received indispensable wisdom from “Coach,” much of which revolved around basic qualities like integrity and respect.

In his later years, Campbell also served as a member of Columbia’s board of trustees between 2003 and 2014, with nine of those years spent as chair. It is Campbell’s name on the formidable 48,000-square-foot sports center unveiled in 2012, which serves as a gateway into Baker Athletic Complex. His retired football number, 67, can be found on patches on Columbia jerseys and emblazoned on the home field.

According to Campbell’s son Jim, CC ’04, SIPA ’08, who also played football for the Light Blue, Campbell understood the challenges of playing football for the Light Blue, recognizing that the program didn’t always yield successful results. As captain of the 1961 championship team—which to this day, claimed Columbia’s lone Ancient Eight title—Bill was an “outlier” in this respect, according to his son. Jim spoke of friendships across generations, created by decades of players coming together to celebrate Columbia football, many of which persist to this day.

“Different age groups—guys that never knew each other, never played together—have this sort of bond,” Jim said. “I think that was a lot of my dad’s doing. He felt it important to kind of stay involved in the community.”

Each year, Bill would host young and old football alumni alike during one night of Homecoming weekend at Old Town, one of his favorite downtown bars. Through evenings at Old Town, the annual Gold Dinner for senior players, Homecoming brunches, and golf outings, Campbell helped construct the community of Columbia football. Campbell was assuredly the perfect person to undertake such a challenge. His friends and family described him as compassionate, caring, and tough when needed, all with boundless energy: a hugger with a penchant for Bud Light.

“He just found something to love in almost everybody,” Campbell’s friend Randy Komisar, co-founder of tech innovation company Claris, said.

Bill Campbell created communities wherever he went. To truly see the many “families” that Campbell was a part of over the course of his life—Campbell’s stepdaughter Kate Bocci put the number around 20—one would have to attend one of his Christmas or birthday parties. According to his friend and former Columbia defensive back Ted Gregory, CC ’74, these parties were manifestations of Coach himself.

“I looked around at [Campbell’s 75th birthday] party and there were tech billionaires, there were people from his high school in Homestead, Pennsylvania, there were his kids’ friends,” Gregory said. “He didn’t care what you looked like, how much money you had. ... If you were a good person, you were in with him.”

That humanity is what Komisar believes was the secret to what made Bill stand out in Silicon Valley.

“Bill’s EQ was just off the charts,” Bullpen Capital founder Paul Martino, who was one of Bill’s mentees, said. “His ability to read people, to understand situations, know what motivated people. ... There just aren’t that many people who are born with those kinds of gifts.”

After coaching both at Boston College and for the Lions (he left Columbia with a 12-41-1 record), Campbell took his bachelor’s degree in economics and his master’s degree in education––both from Columbia––to the West Coast. He started at an advertising agency, J. Walter Thompson, before accepting an offer at Kodak, which he received following the exemplary work he had done on its account. Campbell would later become Apple’s vice president of marketing before serving as the CEO of GO Corporation and then Intuit.

Even after he’d moved across the country, Campbell could be found at every Lions’ Homecoming game, holding court in the upper section of the stands with his longtime friends.

“It was always the coldest, shadiest, no-sun part of the stadium, but since they always did that from the first year back, that was like the tradition,” Bocci said. “They still go to the same spot.”

“Everyone would come up to him. Everybody wanted to see him, and he would talk to everybody,” Jim said. “He got to know multiple generations.”

Fittingly, Campbell’s legacy is a living one through honors such as The William V. Campbell Trophy, considered the academic Heisman of the football world. One of the 2017 semifinalists was former Lions quarterback Anders Hill, CC ’18, who said the honor has grown to mean more and more to him each year thanks to the annual Campbell Trophy Summit, held in Palo Alto.

“Anyone who’s been a semifinalist or a finalist for the award can go back there and it’s really a great weekend of getting to hear a bunch of business leaders speak. Army leaders, generals, former football players like Steve Young spoke there—just a star-studded cast of people you get to hear from,” Hill said.

The event is sponsored by Intuit, Inc., where Campbell was CEO and chairman of the board. He was also heavily involved in the National Football Foundation, which awards the Campbell Trophy.

Komisar can toss around names of people whose lives Campbell touched like pocket change. They are names one would know from their surnames alone: Jobs. Bezos. Yet the casual way they’re thrown around indicates that, to Bill, they were not big names—they were people. And Campbell helped a lot of people.

“Obviously, he was doing all these sorts of important things, meeting with important people—Steve Jobs and the like—and yet when it came time he would never miss one of my Little League games,” Jim said. “He would coach my eighth-grade flag football team.”

Bill, who created a powderpuff team at Bocci’s high school to expose girls to football, famously turned down a phone call from Steve Jobs during football practice in order to focus on the team.

“It’s a common sort of refrain about my father, that everybody who knew him thought he was their best friend,” Jim said. “And it wasn’t an act or anything like that; he just cared about people, and he cared about what they were doing.”

Part of Campbell’s allure was his ability to condense important lessons into the essential. His advice was, according to Jim, “clear, direct, heartfelt, and loving.” Bill possessed the uncanny capability of relating to nearly everyone, from tech billionaires to middle school football players. When working with a company, he didn’t limit his interactions to the CEO. Martino said that Campbell knew everyone’s name in the office, where they were from, and their favorite sports teams.

Even more admirable than his people skills was his generosity. Campbell notoriously refused to charge for his consulting services, which were often carried out over meals rather than in the office.

“Almost every one of us who ended up getting coached by him had to figure out some way to con him or blackmail him into giving him shares of your company,” Martino said.

But for Campbell, it truly was a way of giving back. Bocci credits one of Campbell’s managers in his pre-Kodak days as a source of his altruism. According to Bocci, when he received the offer from Kodak, Bill asked his mentor what he could do to repay her for all the lessons he had learned under her management.

“She told him what you can do to repay me is teach the lessons that I’ve taught you to the next generation,” Bocci said. “And so he felt that him going on and coaching and doing all the things he did was his way to give back to the promise that he’d made to that first manager.”

Bocci said that company shares Campbell earned through consulting went to his foundation, which offered support to causes all over the country: a truck full of Apple merchandise for an after-school program in his hometown of Homestead, a multi-level theater at Bocci’s California high school, and a foundation in Whitefish, Montana to honor his late brother.

Other highlights include a practice facility, an athletic chair, and a scholarship endowment named in honor of a former head coach who mentored Campbell at Boston College, support for the Ronald McDonald House, and two professorships at Columbia. In addition, Campbell’s legacy includes monetary gifts targeting student advising, the Core, and the Aldo T. Donelli Weight Room in Dodge Gymnasium, for which Campbell donated the money and asked that it be named after his former head coach. And his legacy includes, of course, the Campbell Center.

“He’s someone you see everywhere: up at Baker, down on campus, number 67 on the field,” senior linebacker (and, like Campbell, captain) Michael Murphy said. “A lot of our mentors knew him on a personal level, so our mentors kind of relay how special of a guy he was for this program.”

Komisar believes Campbell’s greatest triumph is the people whom he helped become leaders, ethical businesspeople, and better individuals. Though it’s clear that his impact was tremendous in Silicon Valley, Campbell’s legacy lives on just as strongly on the East Coast as well.

“Bill was really all about community, and that extended even past Columbia University,” Hill said. “I don’t know if I’ll ever be able to contribute to the extent that Bill Campbell did. That’s the ultimate goal for everyone.”