Some nights, Bruce Baker is lucky to get to bed by 2 a.m. The Columbia men’s ice hockey coach does not set this bedtime by choice; rather, the Lions can only afford ice time from 10:30 to 11:45 p.m and most games end after midnight.

On the way to the rink, Baker and his players wrestle with the dented doors of two old Columbia-provided vans. Some nights, there are too many players for the vans, so they crowd in, squeezing their gear bags and bodies together.

This is a new experience for first-year Weston Goodman, who played full-time juniors hockey for three years after high school with hopes of going pro. Some of Goodman’s teammates went on to scholarships at Division I schools or entered the NHL draft.

Now studying creative writing, Goodman skates alongside medical students, military veterans, and roller hockey experts. He says he is having more fun playing hockey than he has had in a long time.

“You just have to acknowledge that this is your new reality and that it’s awesome,” he said.

While Goodman’s new reality involves a less intense hockey environment, Columbia men’s ice hockey’s new reality involves winning. For the first time in five years, the Lions lead the D-III Metropolitan Collegiate Hockey Conference and dominate league scoring. They have more wins in the first half of this season—10 in 14 games—than in their past four seasons combined, during which they suffered a two-season, 28-game losing streak and only won seven in 62 games. 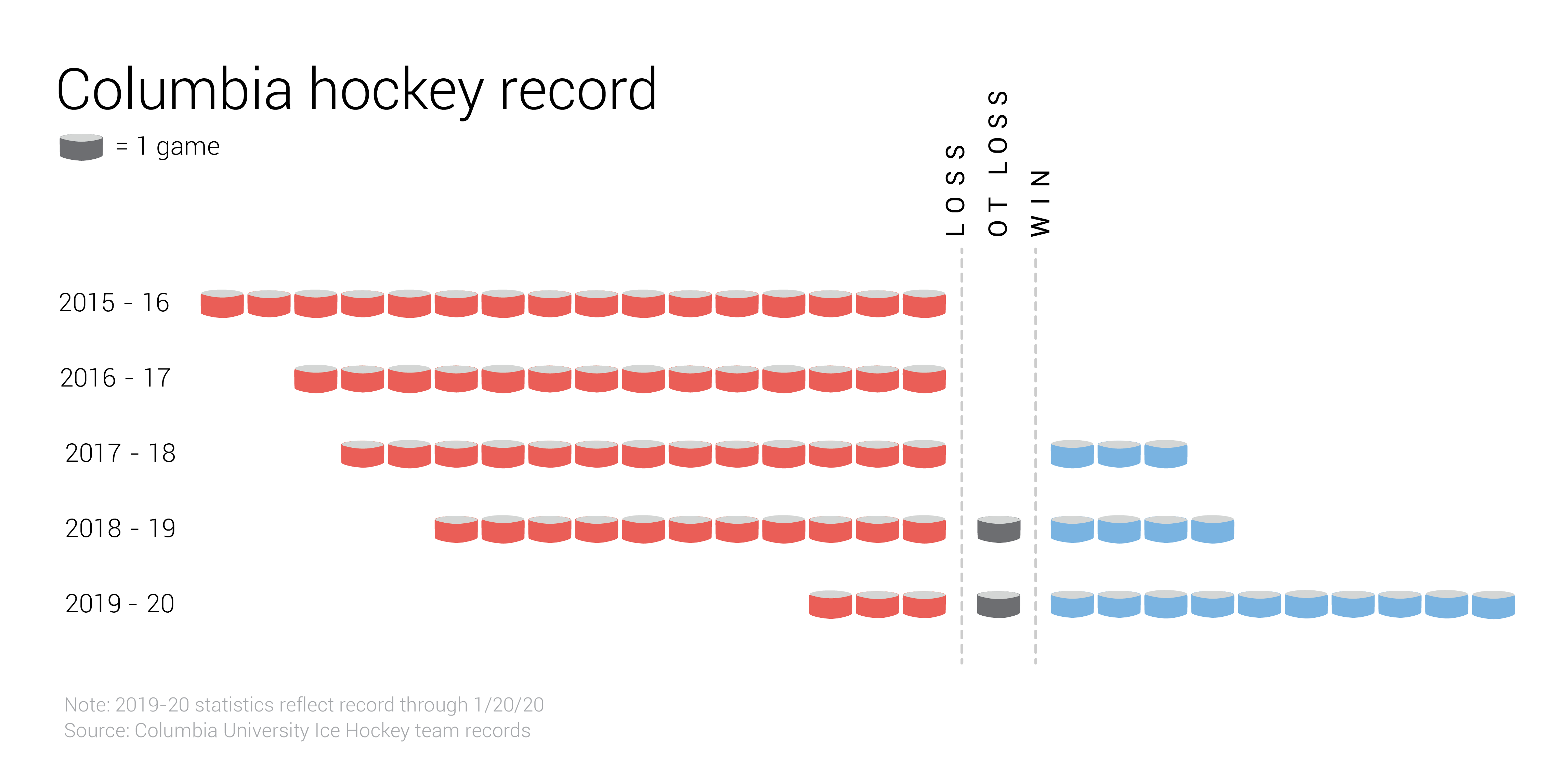 Part of this drastic leap is due to the addition of highly-skilled players like Goodman. But most has come from simply getting more players to show up. Two seasons ago, the Light Blue was lucky to get 10 players at games—a full hockey roster requires 20. Those who did attend, like captain and current junior Andy Dunn, often had to play “a gazillion minutes” a night. As a result, the exhausted players found it difficult to build team chemistry and camaraderie.

“You feel like you have to do everything yourself, and you can’t rely on others on the ice because they’re also exhausted,” Dunn said. “It was embarrassing. You show up to teams who are literally scratching players … because they aren’t good enough to make the lineup, and you are showing up with half the lineup and trying to compete against them.”

In another disheartening season, the 2017-18 team finished sixth in the MCHC having only won three conference games. That team was largely composed of military veterans who were old enough that other coaches often commented that the 5-foot-8, babyfaced Dunn looked like the son of some of his teammates. According to Baker, the three-win season was especially hard on Dunn.

“No matter what he did, no matter how many goals he set up … we just would lose,” Baker said. “He never said it to me at the time, because he has such an upbeat personality, but he must have thought, ‘This is what it’s gonna be like. This is what I’ve put myself into.’”

However, Dunn, along with assistant captain and senior Kyle Lopes, did not accept losing as the status quo. The pair, supported by Baker, spent hours reaching out to potential players and revamping the team website. To create their winning program, the captains tightened up the attendance policy and asked for full buy-in and commitment from everyone on the team.

Dunn and Lopes’ plan succeeded. Their roster grew last season before swelling to a full 20 players this year.

For Goodman, his acceptance to Columbia and contact with the club could not have come at a better time. He was traded in his final year and found hockey’s stresses were making the game miserable. He felt as if his worth was contingent on his athletic performance as if he couldn’t “afford to be friends with” his teammates.

“It was just emotionally very taxing,” Goodman said. “I was just not having fun anymore. I wasn’t playing to have fun, I was playing to impress people, and that’s never the way to do it. And I just had such high expectations for myself and I just wasn’t living up to any of them and I was having a bad season.”

“When I got into here, it was such a relief, because it was like a back door,” he continued. “It was this saving grace. Like, OK, I have something to work towards now.”

After believing hockey was his future for 17 years, Goodman said he now hopes to be a comedy writer. However, Goodman remembered disappointing friends and wondering whether he would “quit on [him]self” by dropping hockey and coming to Columbia.

But in the end, Goodman knew: “It wasn’t worth bouncing around in minor league hockey for the next 10 years when I had an opportunity to come here.”

Although the decision was difficult, Goodman has embraced his new college life. For the first time in years, Goodman said he feels his friendships, including his close relationships with “total homedogs” Dunn and Lopes, are what’s most important on his hockey team. 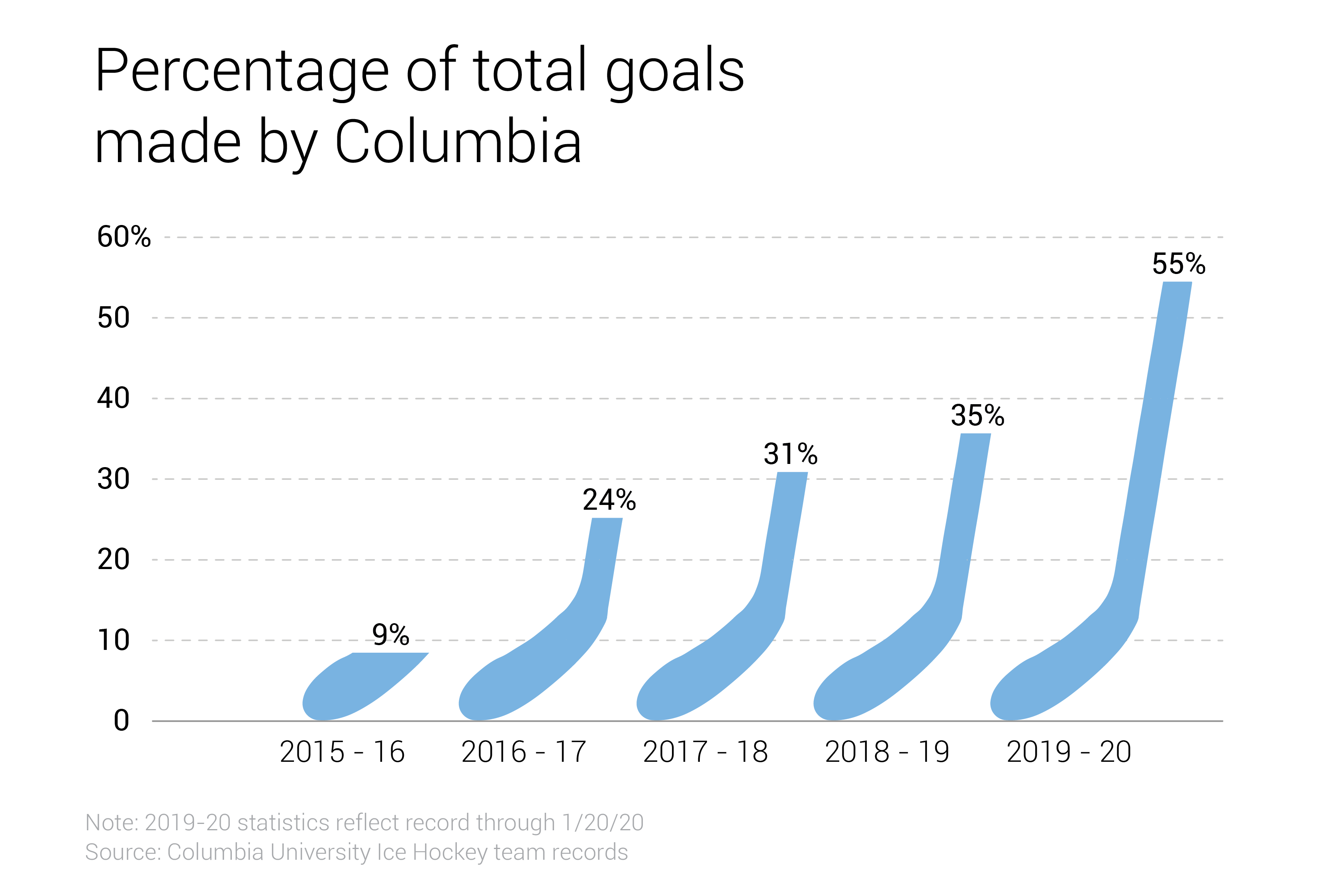 First-year Dennis Franklin, another Dunn recruit, also found the camaraderie to be a defining part of the team.

“At boarding school, it was thought of as ‘all the hockey kids are assholes,’” Franklin said. “Outside of playing hockey, I didn’t end up hanging out with any of the hockey kids that much."

Although he turned down D-III recruiters and bigger fan crowds, Franklin now finds himself making friendships with players on his current team, regardless of skill level.

Instead of power-play analysis, Franklin now has conversations with teammates about their past careers, their musical aspirations, or their podcasts. He doesn’t worry about people thinking he’s a jerk. In fact, the team showed up to watch teammate and first-year Arieh Soffer’s trumpet performance at the Manhattan School of Music, and one teammate began cheering “Columbia hockey” during the show’s intermission. After the event, the team presented Soffer with the “Golden Shovel,” typically given to the best player in a game.

“We were just laughing the whole time,” Franklin said. “Everybody was looking at us, but we didn’t really care. … There’s just so much more fun to have with people who are focused on other things besides hockey.”

Sophomore Ben Vermette, who played juniors before coming to Columbia, agreed. The astrophysics student serves as alternate captain and treasurer this year, arranging ice time, hiring referees, and fundraising through events like Giving Day, where the team raised over $5,000. On the ice, he’s the second-best scorer in the league.

“It’s a lot of work, for sure,” Vermette said of his treasurer role. “But I enjoy it because I know that we need it. … I’d do anything for the hockey team.”

Dunn and Lopes view their responsibilities in a similar light. The leaders spend most of their time figuring out logistics such as ice time, travel, game schedules, fundraisers, and recruitment. It is a world away from their junior hockey lives, which consisted of playing hockey and not much else.

However, skating “once in a while” seems to be good enough for this Columbia team. It is still only seven years removed from Baker’s first year as coach, when he had to pay out of pocket for the team’s ice time. This year, after taking stock of the budget, the team decided it could afford to practice only once a week for the first few months of the season until a cheaper, closer rink opened.

While other schools’ teams have tryouts and often cut dozens of players, Dunn said the Columbia team uses a different mentality.

“We say ‘Hey, we’ll beat you with anyone,’” Dunn said. “We aren’t going to cut anyone from the team, we aren’t going to leave someone in the stands. If you want to play for us, you can play, and we’ll still try and win.”

And its mentality seems to be working. After the team’s 5-4 win against Suffolk Community College, the father of first-year Chris Mendell, one of a dozen fans in attendance, stuck around even when the game ran an hour late. At 1:30 a.m., he came to the victorious van and wrenched the door open before proclaiming: “That’s it! Straight to the championship! Seven in a row—straight to the championship!” The van, with Baker in the driver’s seat, erupted in cheers.

For the first time in five years, the Lions are on their way.