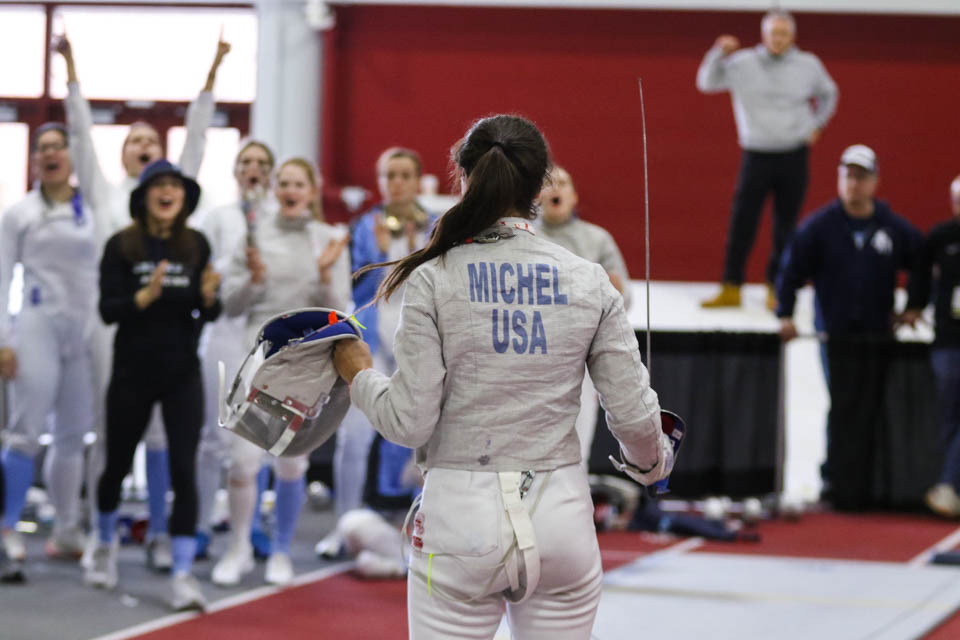 Fencing is not generally considered a team sport. But for the Columbia Lions, it is. Fencing is a screaming sport. For the Lions, it’s that, too.

At the 2020 Ivy League Championships, there were plenty of both. Ringed by fellow fencers, the women’s team pieced together two days of impeccable performances to earn its third straight Ivy League title. Meanwhile, the men's team, embattled from day one after a heartbreaking loss to Harvard, regained momentum on day two to finish in second place on Feb. 9 in Cambridge, Massachusetts.

Forecasted to be the toughest match on the men’s side, the first bout of the tournament against Harvard delivered. First-year Christopher Walker came out swinging in the sabre event, taking the first two points of the tournament against Erwin Cai. Cai evened the score before Walker took the advantage again with a 3-2 lead. But Cai’s 5-3 comeback mirrored an equally distressing first round for the Lions, who would go on to lose to the Crimson 15-12.

Noting that it was his first Ivies, Walker explained, “Seeing the intensity that everybody’s like coming at you with is a lot higher than any other meet,” he said. “It’s like normally people feel OK if they lose one or two bouts, but with this, everybody’s gunning and going for the jugular.”

Adding even more drama to the high-pressure environment, Walker added that he had grown up with his first opponent. “He’s helped me with a lot of stuff as a fencer. He coached me so many times I can’t even count,” Walker said.

The first round was filled with close calls: Senior foil standout Sam Moelis found himself down 3-0 against the Crimson’s Geoffrey Tourette but mounted a 3-point comeback. However, this effort was not enough to overtake the Harvard star, whose stellar performance throughout the tournament earned him a perfect 14-0 record and top individual Ivy honors.

Walker made his presence known against Filip Dolegiewicz, taking a 3-0 lead early and never easing up to secure a 5-2 victory. But nail-biting matches abounded against the Crimson, and Walker next fell to Mitchell Saron 5-4. First-year Ashton Daniel also lost 5-4 to Tourette in a bout that would have narrowed a 14-11 Harvard lead to 13-12.

On the women’s side, however, the Light Blue fought back against deficits multiple times. Junior Maria Chart climbed back after trailing 1-3 to claim a 5-4 victory over the Crimson’s Veronica Czyzewski. Sophomore Natalie Minarik performed particularly well for the Lions, claiming a 5-3 victory against Natalie Yang and going on to control the strip against Cynthia Liu, sweeping her opponent 5-0.

Despite a powerful showing against Harvard, the women nearly faltered against Penn. With two bouts to play, down 12-13, title hopes hung in the balance. Senior Anne Cebula proceeded to crush Jessica Liang 5-0. Without Cebula’s win, all hopes for the Ancient Eight crown would have been lost. Now tied, Minarik took to the strip against Penn’s Julia Thompson with both teams tied 13-13.

“There were definitely lulls in the day, you get a little tired or things aren’t going well, especially against Penn today I saw that,” Minarik said after the bout. “I just saw that it was 9-8, 9-9, 10-10. … I was getting stressed just looking at that. I was like … we’ve got to pull up a little bit more. Losing a bout can mean a lot more now.”

Every point of the match was suspenseful, a back-and-forth that began with a 1-0 lead for Thompson. Minarik tied, then lost the following point, then evened the score once more before earning the next point to secure her first lead of the match. With the remainder of the Penn matches now completed, team members observed the bout with bated breath.

After enduring several long points, Minarik secured the win 5-4, lifting Columbia to a 14-13 win over Penn and keeping their Ivy title hopes alive.

“Even though [Natalie] won 5-4, I kind of felt that she was in control the whole bout,” he added.

The women’s team went on to defeat Brown 19-8, while the men cleaned up against the Bears 23-4 to close out the first day of the tournament.

Walker led off the second day of the tournament with a decisive victory over Princeton’s Zachary Johnson, accompanied by plenty of screams from his teammates. Sophomore Daniella Timofeyev claimed a 5-2 victory over the Tigers’ Alexis Anglade to start off the women’s side in saber.

Minarik continued to shine on the second day of the tournament, claiming a 5-3 victory over Morgan Lee to bring Columbia’s lead 4-1 against Princeton. Other bouts were not so simple. Princeton’s Sofia Komar rode out a single point lead against first-year Arianna Mangano by benefiting from épée’s rules allowing double touches to count for both sides.

Video replay—which isn’t a feature at every tournament—provided a new layer of clarity (and often, drama) for the fencers. With the opportunity to utilize the replay feature once each bout, and the potential to keep it for future use if the fencer’s call was correct, video often turned the tide of matches. In senior Violet Michel’s bout against Princeton’s Ryan Jenkins, the Tigers used video on the very first point and succeeded, reversing a call to grant Jenkins the first point of the match. At 3-2, with Michel in the lead, Jenkins called for video again, though this time the call was not reversed. Three points later, at 4-4, Michel used the replay feature as well. Michel would go on to claim a 5-4 victory in the hotly-contested bout.

It took just two more wins, against Yale and Cornell, respectively, for the women’s team to clinch the Ivy title. The men needed Harvard to fall in order to find themselves at the top of the podium, but the Crimson rolled on day two to finish 5-0.

Columbia leads an unusually-strong conference in the Ivy League, having claimed three of the last five NCAA Championships. Five of the Ivies are ranked in the top 10 in the country, which will make for an even more gut-wrenching Regionals and, later, Nationals.

“Everyone pretty much is a gem on these teams,” Minarik said, adding, “This is the tournament that people come to and they want to do well. They’re putting in everything.”

While it’s true that each Ivy team has individual performers that can no doubt shine on the national stage, this weekend demonstrated the Lions’ consistent ability to overpower top opponents.

The women’s flawless 6-0 record and the men’s 4-1 standing was compounded by the fact that Columbia fencers also earned individual honors at the tournament. Chart finished 14-4 on the weekend, good for second place in the saber competition, with Timofeyev just behind her with 10 wins and five losses. Senior Esther Schreiber claimed second in foil, with Minarik in fifth.

On the men’s side, junior Josef Cohen earned fourth in saber, and junior Sidarth Kumbla placed fifth in foil. Sophomores Teddy Lombardo and Cedric Mecke tied for second place in the épée competition.

The Lions will be back in action on Feb. 12 at home for their very own George Kolombatovich Memorial Meet. They’ll take on NYU, Sacred Heart, and Vassar at 5 p.m. at Dodge Fitness Center.