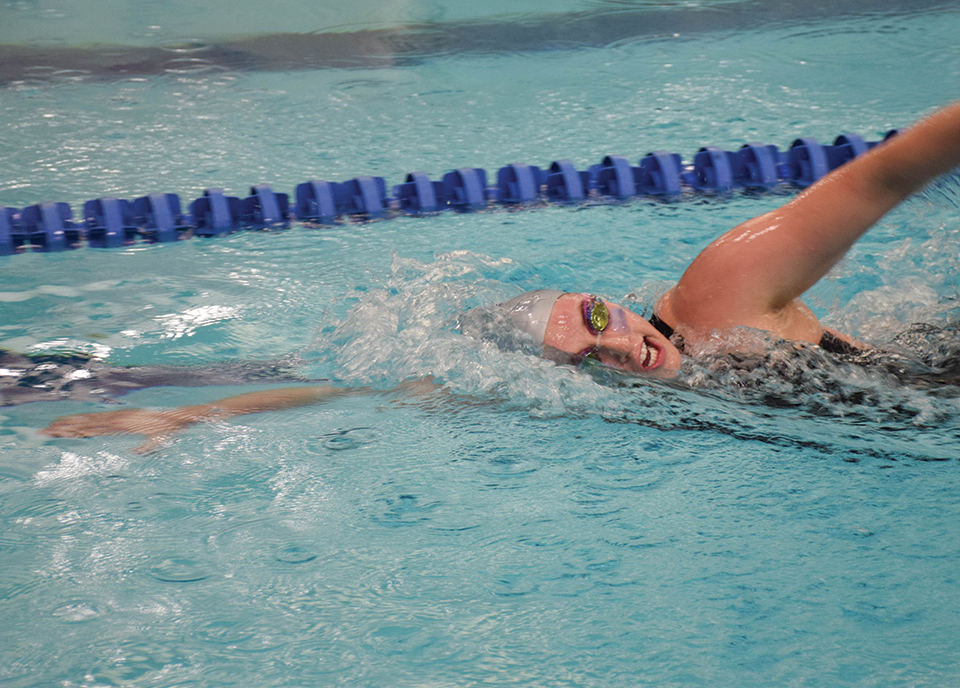 This is the first edition of “The Track to Tokyo,” Spectator’s Olympics series.

Before the air horn sounds and swimmers take off, there are a few seconds of silence as the swimmers step onto the blocks. As senior Helen Wojdylo readies for another contest, she yells a piercing “Come on!” that reverberates throughout the whole facility.

At first, it seems surprising. Columbia is in firm control of its senior day meet against Dartmouth, and Wojydylo isn’t even swimming her best event, racing the 100-yard freestyle instead of the 100-yard breaststroke, the run she has dominated all season long.

But for Wojdylo, who will swim in the U.S. Olympic trials this summer, every race is an opportunity to improve.

Wojdylo has been swimming since she was five years old and competing since she was 11, when she decided to forgo her loyalty to gymnastics and commit to swimming. It was in the water, she says, where she could fuel her competitive fire.

“She realized that she liked swimming more, and so shortly before she was 11 she came back to the swimming club and didn’t really do any other sports after that,” Helen’s mother, Rae Wojdylo, remembered.

Since that decision, Wojdylo’s swimming career blossomed. Impressive high school times earned Wojydylo significant options when it came to college swimming opportunities, and after choosing Columbia, she’s become one of the most prolific swimmers, particularly breaststrokers, in the school’s history.

“I wanted to see what place fit me best as well and where I knew they wanted to develop me and see how fast I could go. I came here knowing they were a good breaststroke school, because of Katie Meili,” Wojydylo said.

Meili, who is the women’s swimming team’s last Olympian, won a bronze medal in the 100-meter breaststroke at the 2016 Olympic Games. As it did for Meili, Columbia has provided Wojdylo with an environment in which she could both set and achieve ambitious goals. She has emerged as the Lions’ most consistent swimmer since her first-year season.

“My freshman Ivys … I kind of exploded a little bit,” Wojdylo recalls excitedly.

However, in her sophomore season, Wojdylo’s times stalled. She couldn’t replicate the breakthrough success that she had found in her first year, and it appeared as if she plateaued.

In response, Wojdylo took it upon herself to improve every aspect of her swimming. She returned home to her club swim team, the Clayton Shaw Park Tideriders, in St. Louis, Missouri, where she trained for a full summer.

Conor Murphy, an assistant coach for CSP, has worked with Wojdylo for three years, starting after her disappointing sophomore year.

“I think the best way that I got to know her was through her mental fortitude,” Murphy said. “Most college athletes that come home for the summer and are separated from their program tend to struggle to maintain their self-discipline, but she was never one of those athletes.”

That toughness and perseverance began to pay dividends in her junior year when Wojdylo triumphed in the defining moment of her career so far: winning the Ivy League championship in the 100-yard breaststroke with a time of 1:00.19. She was the first Lion to win a conference title since 2013, qualifying for 2019 Phillips 66 National Championships in the process.

Wojdylo emphasized the overwhelming pride and support she felt from her teammates as she recounted the exhilaration of her victory.

“I could hear the screaming on deck, and I could tell it was coming from my group, so I know I’ve done something. But the first thing that sticks with me is my team,” she said. “To be surrounded by people that support me so much … makes it so worth it and makes me want to do it so much more again.”

Head coach Diana Caskey feels that Wojdylo’s hard work plays a significant part in motivating her team as a whole.

“I think it’s great to have people whose commitment to the sport stays steady. Helen trains in the spring; she goes home and trains and races in the summer and works around her training schedule. Not everyone is able to do that.”

The summer following Wojdylo’s victory at the Ivy League Championships, she traveled to Palo Alto, California, where she competed in the national championships held at Stanford.

National championships were a new world for Wojdylo, who watched Ryan Lochte and Katie Ledecky practice alongside her in Stanford’s sprawling facility.

In those races, Wojdylo’s prowess extended onto the national stage. The swimmer qualified for the 2020 U.S. Olympic Trials in the 100-meter breaststroke with a time of 1:10.99, the exact cutoff she needed to earn the qualification nod. This close win makes it somewhat unlikely that she’ll be able to jump the incredibly high bar needed to represent the United States internationally.

“I’m thrilled just to go [to the Olympic Trials]. It’s the highest meet you can compete in except for the Olympics. Unless you’re number one or two in the nation, you’re not really going to qualify for the Olympics. Of course, if a freak accident happens, great—I’ll happily represent the U.S.,” Wojdylo said with a laugh.

Wojdylo’s tight victory is just another reminder of how devastatingly slim the margin for error is in swimming, where a few seconds is a lifetime. Had Wojdylo been a stroke slower, she wouldn’t have qualified for the Olympic Trials and would have less to show for her years of dedicated training.

That training process is often grueling. While she’s competing with the Lions, Wojdylo trains six days a week and two times a day. During the summer, she goes home and continues the same breakneck pace of training. While the rest of her fellow senior class plans to retire after Ivy League Championships, Wojdylo will train up until the Olympic Trials in June.

“A lot of people don’t like to train during the summer, but I know that if I take time off, it won’t work for me, mentally and physically,” Wojdylo reflected.

While training has its own general difficulties, striving for excellence in the breaststroke presents more specific challenges.

Associate head coach Demerae Christianson, who has worked with Wojdylo on the breaststroke throughout her time at Columbia, said Wojdylo’s execution stands out.

“Breaststroke is a finicky stroke, so if your timing is off, it’s really hard to swim fast. With Helen, we focus on a stroke count per 25 [yards] that she wants to hit, and that’s what we practice over and over again, so when we put it together, in theory, it should work,” Christianson said.

However, it is Wojdylo’s perseverance that Christianson emphasizes.

“Helen is someone who’s just trusted the process,” she said. “Whether she’s been discouraged or has not gone as fast as she’s wanted, she’s always kept in mind the big picture of improving over her four years.”

Her success, Caskey says, will leave a permanent mark on the legacy of Columbia swimming.

“I think what is exciting is showing that you can have that level of success—you can make Olympic trials during your college career, you can get to NCAAs from the Ivy League. It goes to show that you can compete at a very high level along with very rigorous academics here.”

During her senior year, Wojdylo has unequivocally proven that her success as a junior was no fluke: She’s won the 100-yard breaststroke in five out of six chances so far, breaking Meili’s pool record in the process. Wojdylo knows that she has to maintain that consistency to keep improving.

“I know that I’ve kind of painted a target on my back. Once you’re first, everybody just wants to beat you, so I know if I want to repeat again, I have to train that much harder.”

Now, Wojdylo is gearing up for this year’s Ivy League Championships, where she hopes to bring the Lions another conference title and qualify for the NCAA championships as well.

“All you can do is keep going. If you let yourself have doubt, that’s what’s gonna stop you. I have this continuous forward belief that I can do it, and the confidence in myself that I have put in the training for it.”