There is no gradual story of the football team’s growth over the past decade program’s evolution. This is because the decade was punctuated by one event that could alter the course of the program for decades to come: the hiring of head coach Al Bagnoli in 2015. Prior to Bagnoli’s arrival, the Lions suffered defeat after defeat under a series of coaches. They went 8-42 total for all games played under the consecutive tenures of head coaches Norries Wilson, who was let go in 2011 following a 1-9 record, and Pete Mangurian, who led the Lions to two consecutive winless seasons in 2013 to 2014.

Under Mangurian’s tenure, the team also faced accusations of bigotry. In 2013, defensive lineman Chad Washington, CC ’15, was charged with aggravated harassment and a hate crime. The next day, 46 racist, sexist, and homophobic tweets from members of the football team, including a captain, were released. Despite this, the only action to occur was Mangurian and Columbia Athletics releasing statements—no action was taken against the team.

However, the Mangurian dynasty is perhaps best remembered for the infamous coach’s behavior off the field, as the coach was forced to resign following the release of a letter written by members of the team claiming that he repeatedly “denied the diagnoses of concussions."

The upside to the Mangurian fiasco is that his firing pushed Columbia to put forth millions more in funding for the team to acquire Al Bagnoli, a coach who won nine Ivy League titles and a 112-49 record through 23 seasons at the helm of the University of Pennsylvania football team. Bagnoli’s hiring came as a surprise throughout the Ivy League, as he had retired from his post at Penn only three months before Athletic Director Peter Pilling hired Bagnoli as one of his first acts in the position.

The move has ushered in one of the most successful eras in Lions football history. After starting off slow in his first two seasons, Bagnoli’s Lions announced themselves as a force to be reckoned with on the Ivy League stage with an 8-2 2017 season, in which the team tied for second in the Ivy League, the best finish for Columbia since 1996.

Despite the team’s underperformance over a majority of the past decade, the 2010s did feature a number of players who achieved individual excellence with the Lions. Despite the personal achievements of players like Alex Gross, CC ’11, and Anders Hill, CC ’18, the Columbia football player of the decade was Josh Martin, CC ’13, for both his dominance as a Lion and for his short, yet successful, post-college career in the NFL. Martin, a defensive lineman out of Aurora, Colorado, came to the Lions in 2009. However, he did not see game action until the 2010 season, in which he tied for first on the team in sacks with the first four tackles of his career. After a quiet yet impactful sophomore season, Martin broke out during his junior season in 2011, when he finished with a career-high seven sacks and earned All-Ivy League second-team honors. By the time 2012 came along and Martin was a senior, the defensive lineman was able to dominate the competition and finished the season as the Sid Luckman team MVP and a first-team all Ivy Leaguer.

While Martin was a great defensive player for the Light Blue, his success in football after Columbia cemented his honors as player of the decade. Post-graduating, Martin was determined to find a place in the NFL. After bouncing around the league for a few years, he finally found his NFL home with the New York Jets, who rewarded Martin’s patience and hard work with a two-year, $4.3 million contract. During his time with the Jets, Martin appeared in 30 games where he recorded 36 total tackles and two sacks. While those numbers do not leap off the page, they still make him the most successful professional football player to come through Columbia in the decade. 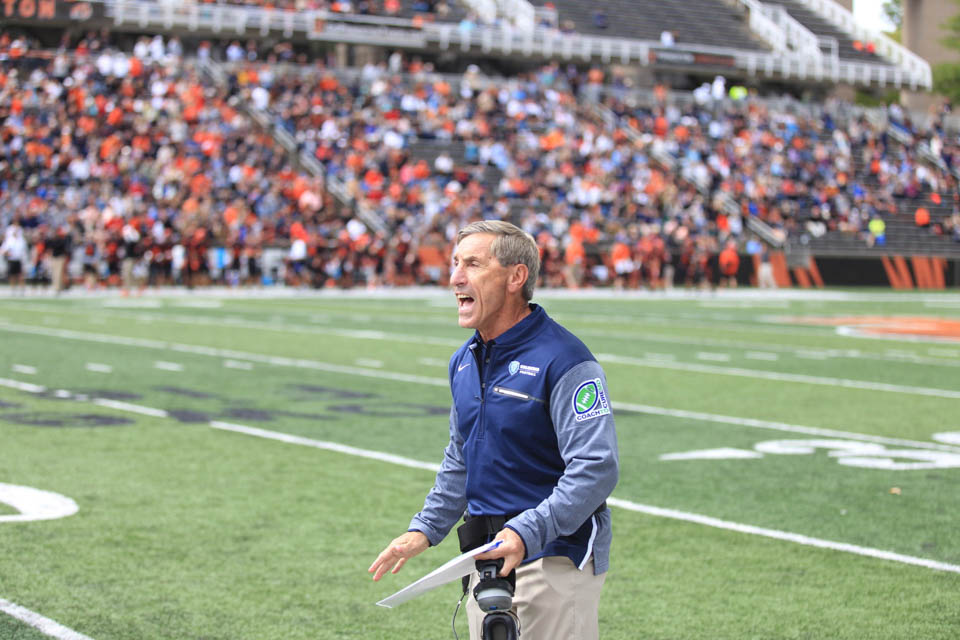 Changes at the helm

A football coach is more than just someone who formulates a game plan—the role involves setting the tone for a team that experiences frequent physical injuries and significant pressure to win. Head coach Al Bagnoli took and transformed this position at Columbia, after he became an Ivy League football legend in his 23 years as the man in charge of the University of Pennsylvania football program—this was the most important moment of the decade for the Lions.

Prior to hiring Bagnoli, the position of head football coach was, to put it mildly, a mess. Norries Wilson served in the position from 2006-2011, and by the end of his tenure, it was clear that the fit was not right. The Wilson-led Lions finished 1-9 in 2011, good for dead last in the Ivy League, and as a result, Wilson was let go. While it may be hard to believe following the unceremonious end to Wilson’s run with the Lions, his replacement, Pete Mangurian, left Columbia pining for the past. Mangurian, who finished with a 16-14 record in his three seasons as the head coach for the Cornell Big Red, seemed like a reasonable hire at the time, and at first it looked as if the move might pay off. The Lions went 3-7 in his first season in 2012, but this was when the good times ended. The team went winless over Mangurian’s next and final two seasons in charge before the coach was finally let go amid a fury of controversy that was kick-started when his players sent a letter to the administration claiming that Mangurian’s negligent approach to concussions was putting his players’ safety at risk.

In a move that sent shockwaves through the Ivy League, Columbia replaced the now-infamous Mangurian with a coach no one thought was available. Bagnoli had announced his retirement from coaching Penn less than three months before Athletic Director Peter Pilling recruited him to Morningside Heights to take on a challenge many coaches had failed at before. Bagnoli was exhilarated by the challenge of revolutionizing the struggling team. “Before I took the job, I always thought there was great potential there. When they finally invested in the facilities, I thought, “Why shouldn’t you be able to do it there? Why shouldn’t we be able to get kids to come to a great school in Columbia and a great city in New York?,” he said. The University had just decided to put forth millions into building the Bubble for the team to practice in the winter, in light of his arrival.

Bagnoli has since succeeded in ways many thought were impossible at Columbia. Following two unnoteworthy seasons to begin his time with the Lions, Bagnoli’s team leaped onto the Ivy League scene in 2017, finishing 8-2, the best record since 1996. Bagnoli was recognized nationally for his success with the Lions, winning the Eastern Collegiate Athletic Association’s FCS Coach of the Year award. While the two years since have not resulted in the same success as 2017, the Lions have remained on the Ivy League radar ever since. For Columbia, that is really saying something. 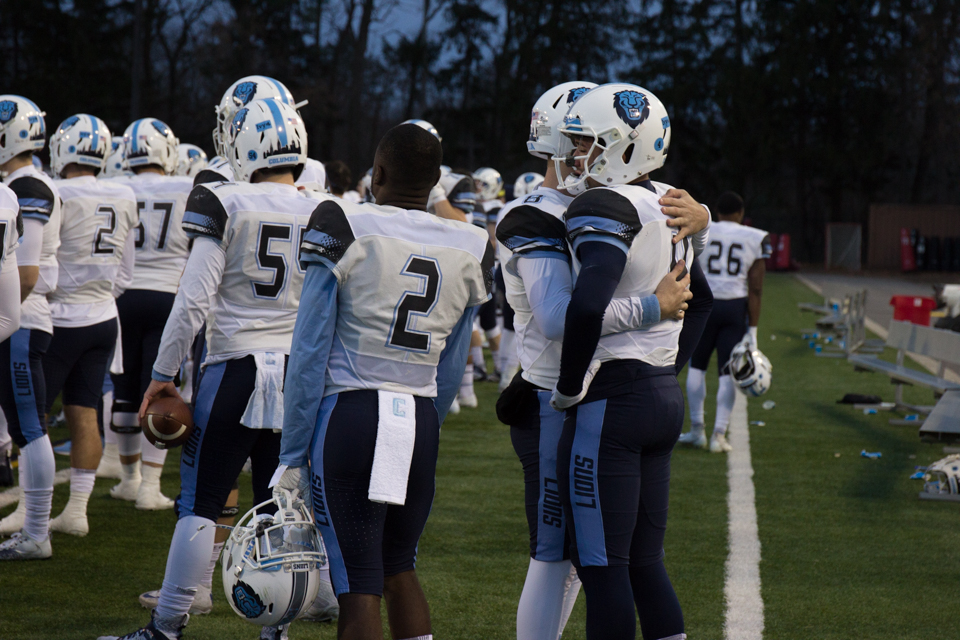 Game of the decade

While the distance between 116th street and the Baker Athletics Complex on 218th street can be an obstacle for drawing fans to Columbia football games, each year on Homecoming, the entire student body weathers the trek uptown to cheer on the Light Blue. In 2017’s iteration of the event, the Lions put up a magnificent performance that made the trip worth everybody’s time. Prior to the team’s 9-7 homecoming victory over Dartmouth in 2016, Columbia had not produced a win on occasion in over 15 years. The Lions went into their contest against Penn with a sterling 4-0 record and were hoping to keep the winning streak going in front of an announced crowd of 13,081 people, the second largest attendance at a Columbia football game since 1983. Late in the game, however, it appeared as if the Lions were in store for yet another homecoming disappointment, as they were down by 14 points with 10:55 left in the fourth quarter. In his last homecoming game, quarterback Hill led the Light Blue in a furious comeback that had the team up by a touchdown late in the quarter. However, a Quakers touchdown pass knotted the game up at 28 points apiece and forced the game into overtime. In the extra period, Penn opened with a field goal on what would prove to be its final drive of the game. The Lions got the ball back knowing that a field goal would give the Quakers another chance to counter, while a touchdown would win the game then and there. With that in mind, Hill found then sophomore receiver Josh Wainwright, who was open over the middle of the field for a 24-yard touchdown. Wainwright then won the game and sent the entire stadium into a celebration the likes of which have rarely been seen at Wien. This moment is representative of the improvement the program has seen in the last ten years—creating a team that is, once again, competitive in Ivy play.