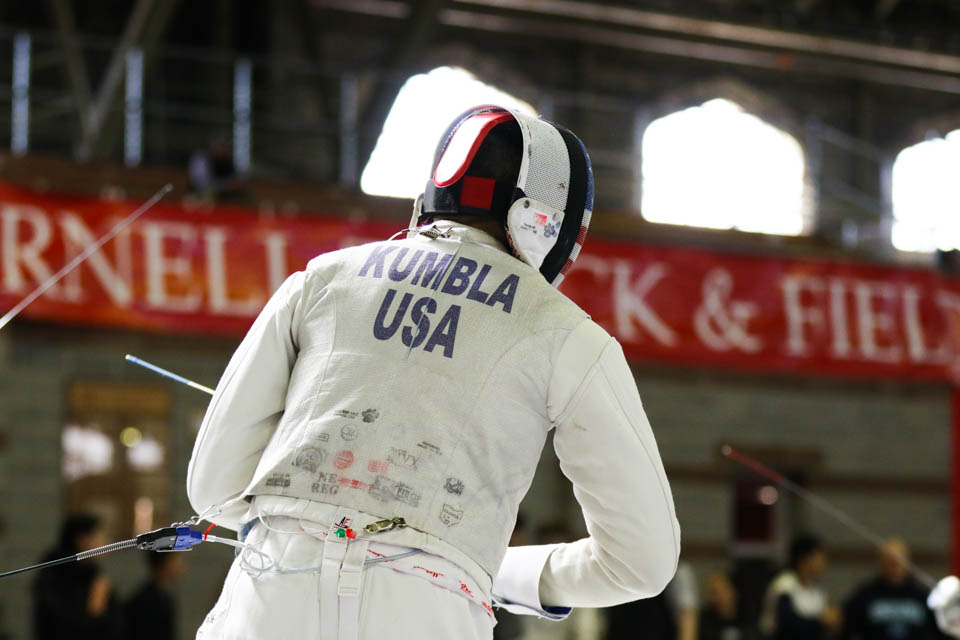 Faced with a strenuous day of regional competition, the Lions qualified 11 fencers for the NCAA Division I National Championship.

Columbia fencing battled through an extended day of competition, with some athletes fencing as many as 23 bouts, in order to secure 11 qualifications for the national tournament. But as men’s épée struggled, the Lions fell just short of the desired 12 qualifications that would have made for a full roster at Nationals.

The NCAA Northeast Regional, which was held in Ithaca, New York, brought 18 of the country’s top teams together on March 8 to compete for spots at the national tournament. With an exhausting format and just eight or nine possible slots at the NCAA Division I National Championship available for each weapon (though two at-large bids are granted later), it is common for athletes to struggle with both the mental and physical aspects of fencing.

“You go in knowing it’s tough, so it’s just about getting your body as physically used to fencing as much as Regionals, the best that you can, and also just trying to work on your emotions and not letting things faze you,” senior épéeist Gianna Vierheller explained.

The tournament consisted of three rounds with eliminations after each. In the first round, 35 fencers were split between five groups. Everyone fenced everyone in their pool, and 14 fencers were eliminated. The second round had three pools of seven, and the final round consisted of a single pool of 12 athletes. Of those, eight moved on to Nationals. Sixty percent of the final rankings are determined by the fencers’ performance at Regionals, with 40 percent resting on their performance over the course of the season.

Vierheller said her confidence was “a little hit or miss” due to her previous experiences at Regionals. She performed well in her first two years at this tournament, she said, but last year, she missed the qualifying cut in the second round and did not move onto the third.

“[It] was really stressful and pretty scary, because this time around, it definitely got to me and I almost didn’t make it out of that second round again. I was the last person to qualify to make the final pool,” Vierheller said. “In a way, I think it helped too, because once when I got to the last pool it was so low pressure; I was just happy to be there.”

On the men’s side, senior Sam Moelis and junior Sidarth Kumbla qualified in men’s foil with third- and fourth-place finishes, respectively. First-year Christopher Walker had a banner day in the sabre competition, placing first, while junior Josef Cohen took silver. Senior Andrew Doddo was fourth. Since only two members of each squad can participate at Nationals, head coach Michael Aufrichtig must now select which two athletes from each weapon will compete at NCAAs.

Although individual pressure to perform well is heightened at Regionals, the Lions also have a lot riding on the tournament as a team. Schools may qualify up to 12 fencers for NCAAs, and to have a shot at winning the national title, every qualification matters. Qualifying 11 fencers instead of 12 could mean a difference of 23 individual wins at NCAAs, according to volunteer assistant coach Wesley McKinney. For the past five years, Columbia has qualified 12 fencers for Nationals.

The place where the Lions came up short of the coveted 12th spot was in men’s épée. Having already clinched five of his six bouts, first-year Alan Temiryaev was in the clear in the second round. But sophomore Teddy Lombardo, who had charged his way to a national runner-up finish last season, struggled all through the round and faced elimination. Sophomore Cedric Mecke, meanwhile, was 1-3. In order for the Light Blue to have a shot at qualifying two men’s épée fencers, Mecke would have to win his next two bouts.

“I was having a bad time, and then Michael was like, ‘What do you need?’ and I said, ‘I think some confidence,’” Mecke said.

Aufrichtig instructed Mecke to go outside, a common practice when fencers need to clear their heads. There, Mecke saw Lombardo, one of his oldest friends. Mecke confided in him about his record.

“Then he told me, ‘I didn’t make it.’ And then a switch flipped immediately and he was telling me, ‘You can do it’ … and immediately my adrenaline went up like crazy,” Mecke said.

Mecke fenced Harvard’s Josh Wilcox in the following matchup. Although he lost the first point, Mecke recovered quickly and claimed the following four points to make it 4-1. He defeated Wilcox 5-3 and went on to take down Isaac Shelanski of Yale 4-3 to keep Columbia’s chances of another Nationals title alive.

The format of the regional tournament starkly contrasts with most other events on the fencing calendar. An inordinate amount of bouts are packed into a single day of competition, and fencers finish the day physically and mentally drained. Coaches are tasked with figuring out how to lift athletes from slumps in key moments.

“Everybody has their own way that they liked to be communicated to, and sometimes, no matter what you say, it just doesn’t matter,” Aufrichtig said. “I just feel like we have to get them in at least a mindset of, ‘It’s not over ’til it’s over, and I need to fence. There’s nothing I can do other than fencing and to be in the present.’”

The emphasis on individual fencers rather than the team poses an additional challenge for the Light Blue. Due to the team’s wealth of talent, the Lions often fence their own teammates in multiple rounds. To prevent higher-ranked fencers from throwing specific bouts to help their friends qualify, the tournament format requires that teammates fence each other first in each round. This rule created matchups between Moelis and Kumbla, Timofeyev and Michel, and Doddo and Cohen, among others.

Aufrichtig said experience often makes a difference when it comes to performance at Regionals. Mecke, who’s never been to Nationals, will have a different kind of experience when he competes in Detroit on March 19.

“I asked Mike if Teddy could come with me because he came in second last year. … I think [that] would help me a lot because Teddy and I, our communication is really good. I mean, we’ve known each other since we were 12,” Mecke said.

Although the fate of the national tournament hangs in the balance due to increasing concerns about the rapidly-spreading new coronavirus—at Regionals, athletes substituted elbow bumps for the customary post-bout handshakes—Mecke plans to train all through spring break to prepare for the NCAAs.

The NCAA Division I National Fencing Championship is scheduled for March 19 to 22 at TCF Center in Detroit, Michigan. Official qualifying lists will be posted on Tuesday, March 10.