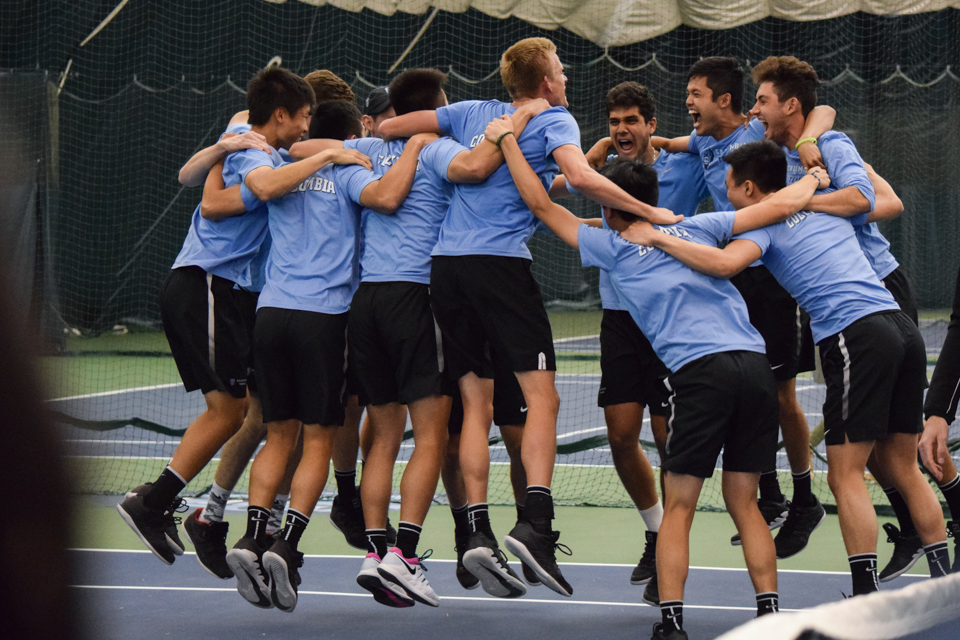 The three seniors on the men's tennis team—Jackie Tang, Adam Ambrozy, and Alex Keyser—will not be able to stay on the team and compete for the program's seventh consecutive Ivy League title next spring.

The Ivy League will maintain existing policies and not grant an extra year of eligibility in the league to its athletes in spring sports whose seasons were canceled due to the coronavirus pandemic.

This decision came three days after the NCAA Division I Council announced that it would allow schools to give their spring-sport athletes an extra year of eligibility and permit coaches to expand their rosters to accommodate returning seniors who were unable to compete this spring due to COVID-19.

The Ivy League canceled remaining practices and competition for all sports on March 11, soon after schools, including Harvard University, announced that they would be sending their students home, rendering spring competition unrealistic.

In a statement to Spectator, an Ivy League spokesperson said that the decision not to grant an extra year of eligibility was a continuation of “its longstanding practice that athletic opportunities are for undergraduates.”

The Division I Council did not offer an extra season of eligibility to winter-sport athletes, including those on the Columbia women’s basketball team, whose first-ever Ivy Madness trip was canceled on March 10, and on the fencing team, who planned to compete for another national title.

For Ivy League athletes, not providing post-undergraduate eligibility could force student-athletes to choose between pursuing graduate education or employment opportunities and transferring to a different university to compete athletically after their four years with the Lions. Columbia spring-sport seniors who want a chance to finish their final season, including stars on championship teams like men’s tennis, must transfer outside of the conference to do so.

“Giving people the choice to do things that matter to them is important, and taking it away because ‘oh, our students all graduate in four years’ is pointlessly cruel,” Victor Matheson, a professor of economics at the College of the Holy Cross, said.

According to David Berri, professor of sports economics at Southern Utah University, it would also be a “very big mess” to manage playing time between seniors returning for a fifth year and their younger teammates.

“Assuming everything comes back, there's going to have to be some decisions made about who’s gonna pay the penalty here, but somebody’s gonna have to pay a penalty, because the playing time issue is finite,” he said.

The Ivy League has long disallowed other extensions of eligibility within the conference, including the NCAA’s rule permitting athletes to have four seasons of competition within a five-year period. Even before this decision, players who lost entire seasons to injury, including senior basketball players Mike Smith and Jake Killingsworth, would have to transfer out of the league to finish their college playing time.

This year, players from the Ivy League make up five of the top 10 immediately eligible graduate transfers in men’s basketball, according to ESPN.

The Ancient Eight is also the only Division I conference to not allow graduate students to participate in athletics. At some D-III colleges, including Matheson’s own Holy Cross, graduated athletes are not allowed an extra year of eligibility because the schools are undergraduate-only, lacking the academic infrastructure to support graduated athletes on campus.

Matheson noted that even if the Ivy League had offered the extra season of eligibility to spring-sport athletes, it is not likely that many graduated seniors would return.

“The average Columbia golfer is probably not at Columbia mainly to golf. They’re at Columbia to get a Columbia degree, and offering them another year doesn't necessarily hold a lot for them,” Matheson said.

The hypothesis rang true across other conference schools, as athletes including those on Yale’s heavyweight men’s crew said they were not considering transferring. However, although not many athletes would likely take the University up on the offer, Matheson said that the Ivy League has the capacity to support student athletes, as its schools have graduate schools which could support returning senior players.

In both the Ivy League and the rest of the NCAA, the loss of a sports season poses a dilemma between covering the costs of an extra year in school, or losing the final chance to compete in a sport they love.

“Certainly, seniors have had their senior year taken away, Berri said. “But that's not an easy thing to fix.”