A decade in athletics: Rowing earns its first national championship since 1929

A decade in athletics: Rowing earns its first national championship since 1929 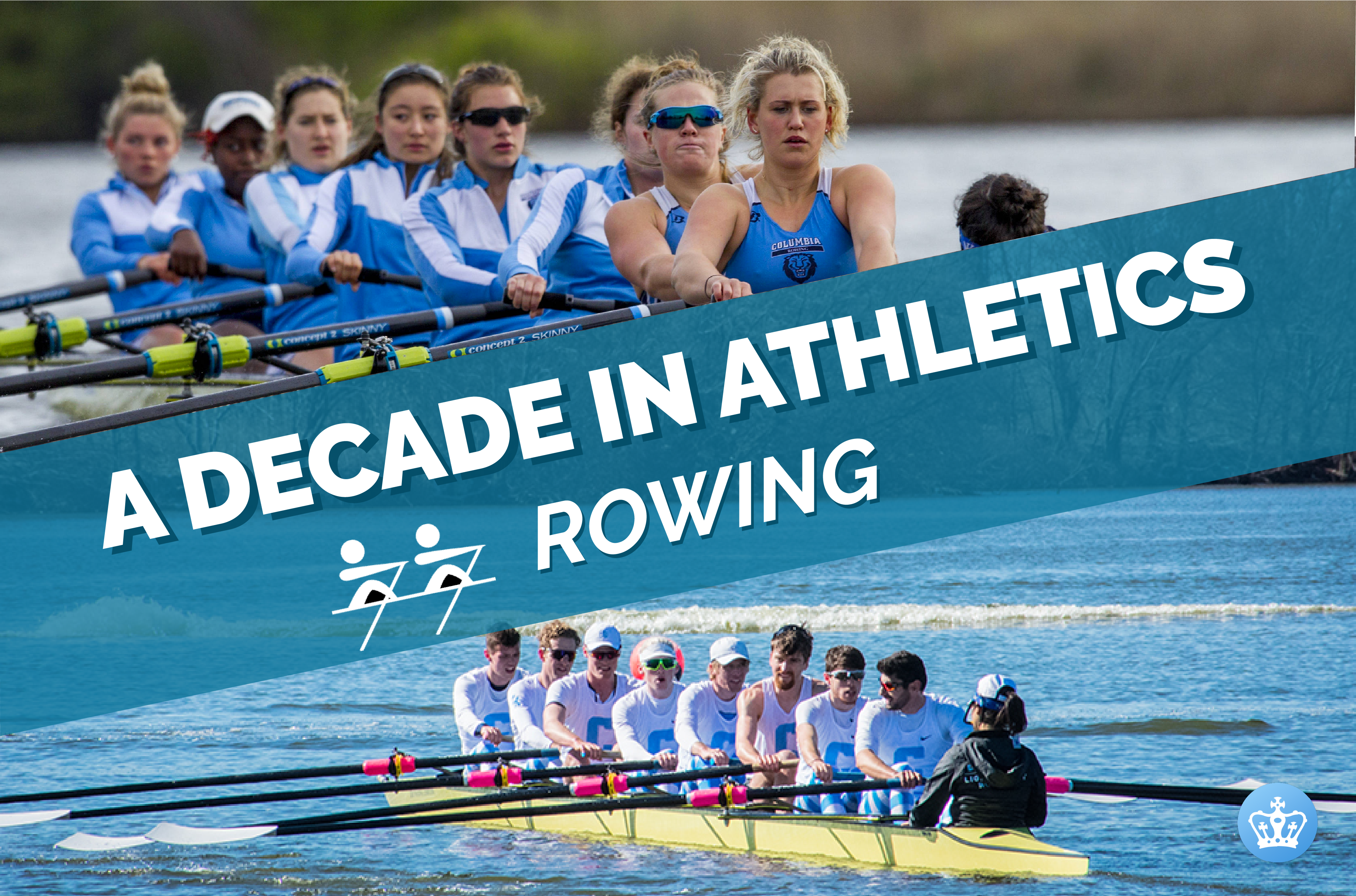 Lightweight rowing won the IRA National Championship Regatta in 2016 and 2018.

This decade in Columbia rowing was one of contrasts: coaching turmoil against stable leadership, championships against conference-bottom finishes. As the men’s lightweight rowing team brought the first modern national championships to any Columbia rowing team and the first-ever lightweight title, the heavyweight men fought to qualify for the National Championship Regatta, peaking with a top-10 finish in 2010. The women’s team struggled to find consistent plans and coaching; despite standout individual performances, the team could not make it out of the bottom half of the conference.

In 2012, another change came on the water. Columbia’s home course has historically been the Harlem River, meaning tidal flow, weather restrictions, and ocean-like waves come with the territory. The move to Overpeck Park in New Jersey cost the teams a spring-season boathouse, as their only facility is located on the Harlem River at the Baker Athletics Complex, which the Lions use only sporadically in the competition season. However, the Lions gained better water to row on.

“One of the huge optimistic points for us looking forward to the future is that you almost never have an opportunity to change your waterway,” men’s heavyweight head coach Scott Alwin said. “We have an opportunity that is not once in a generation, it’s once in a century or once ever in the history of the program.”

And while it couldn’t have improved the team’s performance to spend the spring season rowing out of trailers and portapotties in a space owned by the New Jersey government, it may have contributed to the underdog mentality many Columbia rowers often say they experience. Indeed, for some Columbia lightweights, maybe it made their 2016 victory over lightweight powerhouses that much sweeter. In addition to relocations, coaching changes, and world championship athletes from all three teams, this decade produced, for the first time in nearly a century, titles. 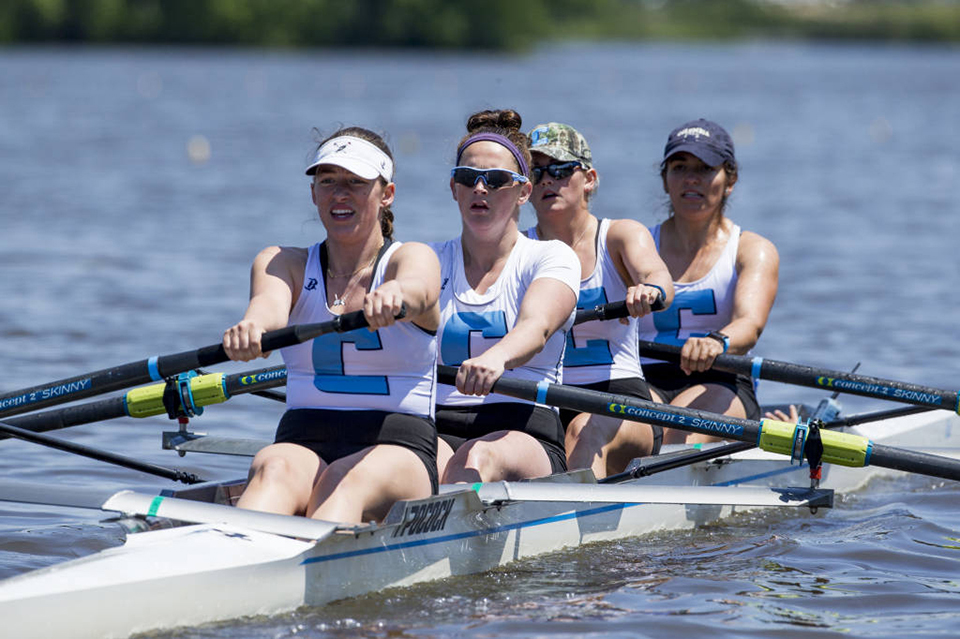 Under its four coaches this decade, women’s rowing struggled. Despite intermittent individual successes, dominant performances, and national team berths, the crew continued its history of weakness and slumped after a promising start to the decade and strong 2016 year. As the Ivy League is a strong rowing conference, the Lions’ varsity eight broke out of the bottom three only once this decade, and the team as a whole only finished as high as sixth. In the most recent Row2k coaches poll, the team finished the decade ranked 30th, under the University of Alabama.

At the beginning of the decade, the future seemed bright. In 2010, the second varsity eight finished fourth in the EAWRC and in the Ivy League, and the varsity snuck into the top 10. In a positive sign for the future of the program, then-first-years Samantha Warren and Nikki Bourassa were named to the competitive Mid-Atlantic All-Region team by the Collegiate Rowing Coaches Association. Despite a 2011 coaching change, as Melanie Onufrieff stepped down and Scott Ramsey took the reins, Warren and Bourassa would go on to individually dominate collegiate rowing. In 2012, Bourassa won the collegiate lightweight CRASH-B indoor rowing championship, and Warren earned an All-American distinction and a spot on the American U-23 national team.

However, there are eight rowers in a boat, and this individual success didn’t automatically translate into team dominance. In 2012, the Lions missed the six-boat grand final in an eight-team race in every event they entered.

This would change in 2013, which was perhaps the decade’s peak. Columbia scored a regular-season victory over Brown, and every boat the team sent to the Ivy League championships made the grand final. The varsity eight finished fifth in the league, earning its highest placing of the decade and possibly in history. Warren was a first-team All-American, the Lions were ranked No. 15 nationally, and Ramsey was named regional coach of the year.

However, with the graduation of Warren and now under the control of Ramsey, the team hit a slump and couldn’t break out of the conference basement. As the team sank in national rankings, Ramsey allegedly forced ill and injured athletes to continue coming to practice, leading one rower with mononucleosis to attend until she began passing out during workouts. Twelve rowers quit after the team’s seventh-place finish during the 2016 season, and as negative post-season-survey results piled up, Ramsey was fired in 2017.

Emerson Curry, then-assistant coach on the men’s heavyweight team, took over. His more laid-back personality has brought results more reminiscent of the decade’s start, as the team struggles to dominate in a competitive league, but individual stars rise. One recent star is senior Liza Ray, who competed on the American U23 national team in 2019, finishing sixth in the lightweight double. But despite her performance, the Lions have still struggled to make a name for themselves in the league.

Columbia men’s heavyweights, more than any other Columbia rowing team, have enjoyed more stable coaching this decade under head coach Scott Alwin, who entered in 2014. The team has also had slightly more success than the women’s team, as it has reached the men’s national championships seven times this decade. Of course, there are fewer men’s rowing teams that compete for the title: The men’s heavyweight championship, the Intercollegiate Rowing Association National Championship, draws 24 teams from a pool of around 50 teams, while the women’s NCAA Division I National Championship pulls 22 from almost 90.

Still, the team has a strong national presence, sending several athletes to the under-23 National Team, and it seems to be stabilizing after its wonky start to the decade. In 2010, the Lions recorded their best performance of the decade with a 90-point effort at the IRAs, good for 10th place in the nation, and sent three affiliated rowers to the U.S. national team for the World Rowing Under 23 Championships. 2011 saw five standout individuals, despite a poorer performance at the IRAs, qualify for the national team.

However, in 2012 and 2013, the tide turned against the Lions. They did not qualify for the IRAs either year, as the varsity eight placed dead last in the Ivy League at the Eastern Sprints in both years. Head coach and Director of Rowing Mike Zimmer, who spent decades developing all three Light Blue crew programs and workedstints as the head coach of each, stepped back from Columbia rowing, and longtime lightweight coach Scott Alwin stepped into the head heavyweight role.

Alwin faced a similar situation with the lightweights at the beginning of the decade, as they missed qualification for the IRAs, and he took them to a bronze medal at the national championships in the next three years. While progress with the heavyweight men has been slower—as there are also many more teams competing for the heavy men’s title—the team has made it to the IRAs in five of Alwin’s six years as a leader, and right after he took over, they earned top 10 finishes at the championship in both the varsity eight and the freshman eight. While the team as a whole has not made it to the top 10 in points again, they have stayed in the fight, as Alwin has brought in strong recruits.

One of those recruits, however, is better known for actions out of the water. Clay Watson, who competed in the World Junior Championships before coming to Columbia, was arrested as a first-year for intruding into a Barnard dorm and urinating on a student’s belongings. He was reinstated to the team after being charged and released but before appearing in court, and he has competed in the second and first varsity eights at the Eastern Sprints since then. And despite adding athletically talented recruits to the roster, including World Rowing Championships silver medalist John Tanguay, who competed in the PR3 mixed four, Columbia rowing still hovers around the bottom of the conference in the Eastern pack. 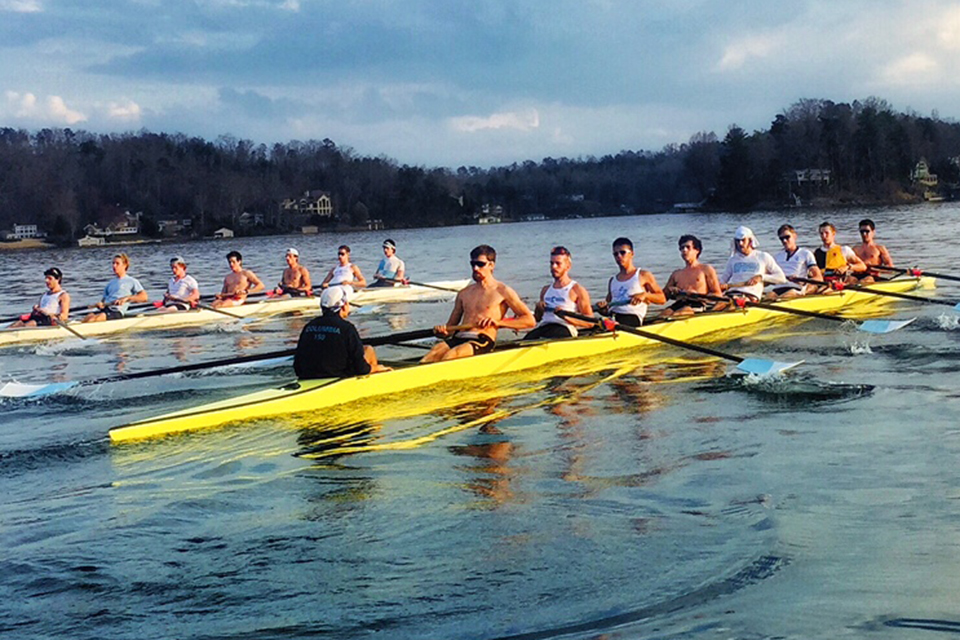 After beginning the decade by missing the IRA National Championship Regatta, the Columbia lightweights, led by coach Nich Lee Parker, earned two national titles, the school’s first championships since 1929. Impressively, the Lions accomplished this while, in the words of one athlete, “rowing out of a landfill” and earning a reputation as an underdog program with a unique attitude and a strong Instagram presence. The Lions were poised to make another run this year before the coronavirus outbreak forced the cancellation of spring competition.

With a successful first season in the books, Parker’s distinct coaching style would soon become evident. Using an “integrated model of performance,” Parker brought in outside experts in physiology and other areas, using technology to track the heart rates, sleep, and nutrition of athletes on the team. He encouraged the athletes to put together their own, individualized training plans. He even instructed the team to jog, rather than walk, from the bus to the boathouse and back. It worked: During the 2014-15 season, Parker’s second on the job, he said the athletes broke “every single ergometer record that ever existed” on the team, gaining speed on the rowing machine which, Parker hoped, would translate to the water.

Despite the changes made to the team’s training regimen, the 2015 IRA Championship was another oh-so-close failure. The Lions actually tied the champions, Cornell, in total points. But they finished two seconds behind the Big Red in the varsity eight, and so the trophy and gold medals went upstate.

The next upgrade for Columbia’s lightweights centered around technology. The team purchased advanced rowing machines, which tracked not just speed but also the energy exerted, length, and peak force of each stroke, which is helpful in mimicking “boat feel” even when off the water. As the athletes followed the workout regimen, they also built a significant presence on social media, garnering thousands of followers on their comedic page and becoming one of the most prominent social media accounts in the rowing world.

But with or without the comedy, the philosophy continued: Minor changes, even those as minute as helping rowers with slightly different heights match up better, make a difference.

That year, they would make the most important difference. After losing a close race to Yale in the Eastern Sprints, the lightweights claimed the IRA title by 2.4 seconds, nearly a full boat length margin over their competition, and Parker was named the USRowing Collegiate Coach of the Year. After a dip in 2017, where only five seconds separated their sixth-place finish from Cornell’s first, they won again in 2018, this time claiming the EARC title as well. 2019’s Lions fell just seconds short again.

The takeaway: The C150, a reference to the minimum weight in lightweight rowing, contended for a national title for the past seven years, bringing national trophies back to Columbia rowing for the first time in nearly a century. And, while incorporating intricate discussions of technique, biomechanics, and new training strategies, the team had fun along the way.