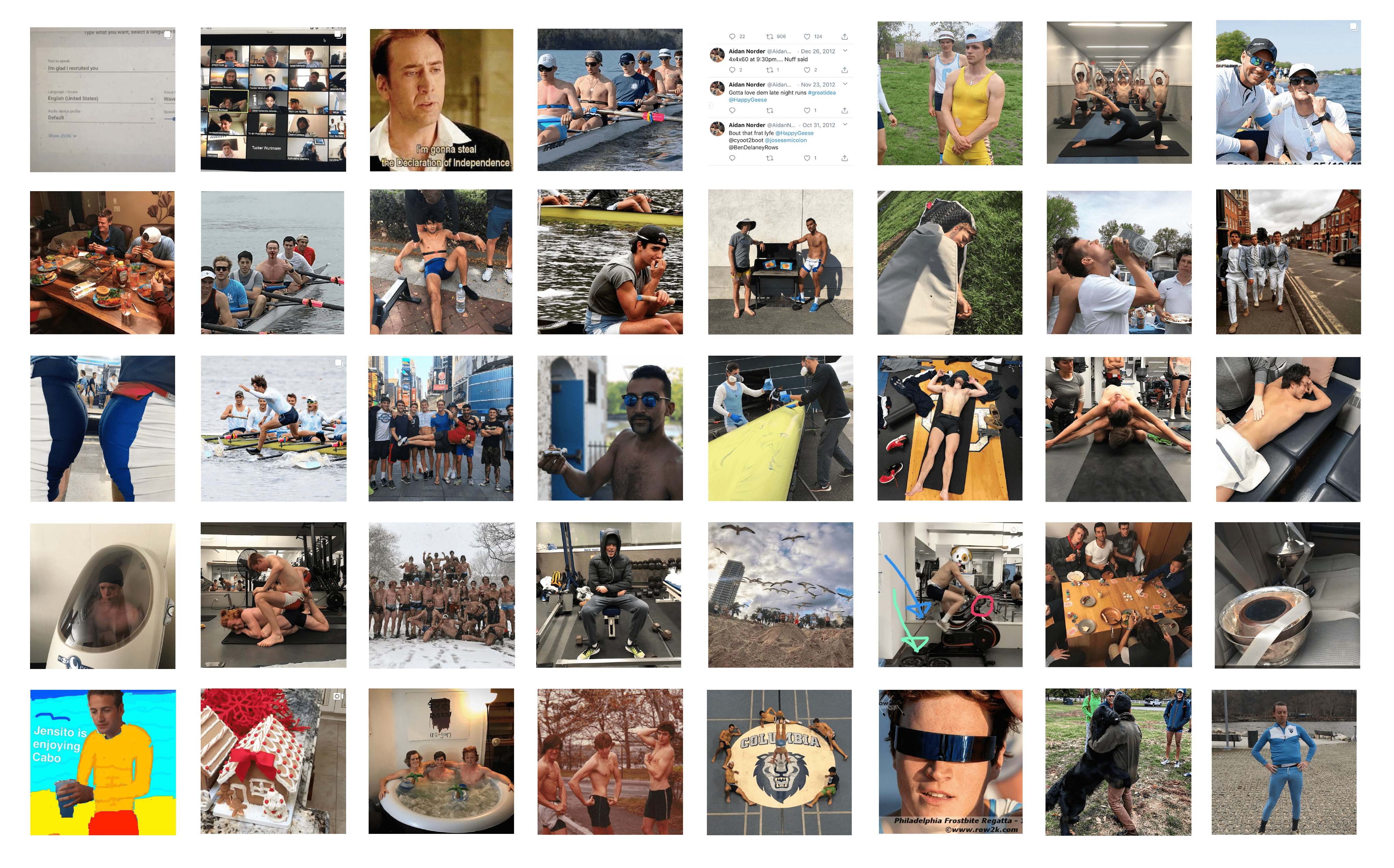 The first question prospective lightweight rowers ask when they get to Columbia’s campus is not necessarily about the team’s championships, extensive meditation, technical training, or even about the team’s lack of a boathouse in the spring.

With 14,200 followers, the unofficial team-run page is a serious presence in the rowing Instagram community, notching more followers than the Canadian or Russian national teams; legacy rowing programs at Cambridge, Harvard, or Cal Berkeley; and even some Olympians. It is the most-followed sports account at Columbia and one of the most popular in the Ivy League. 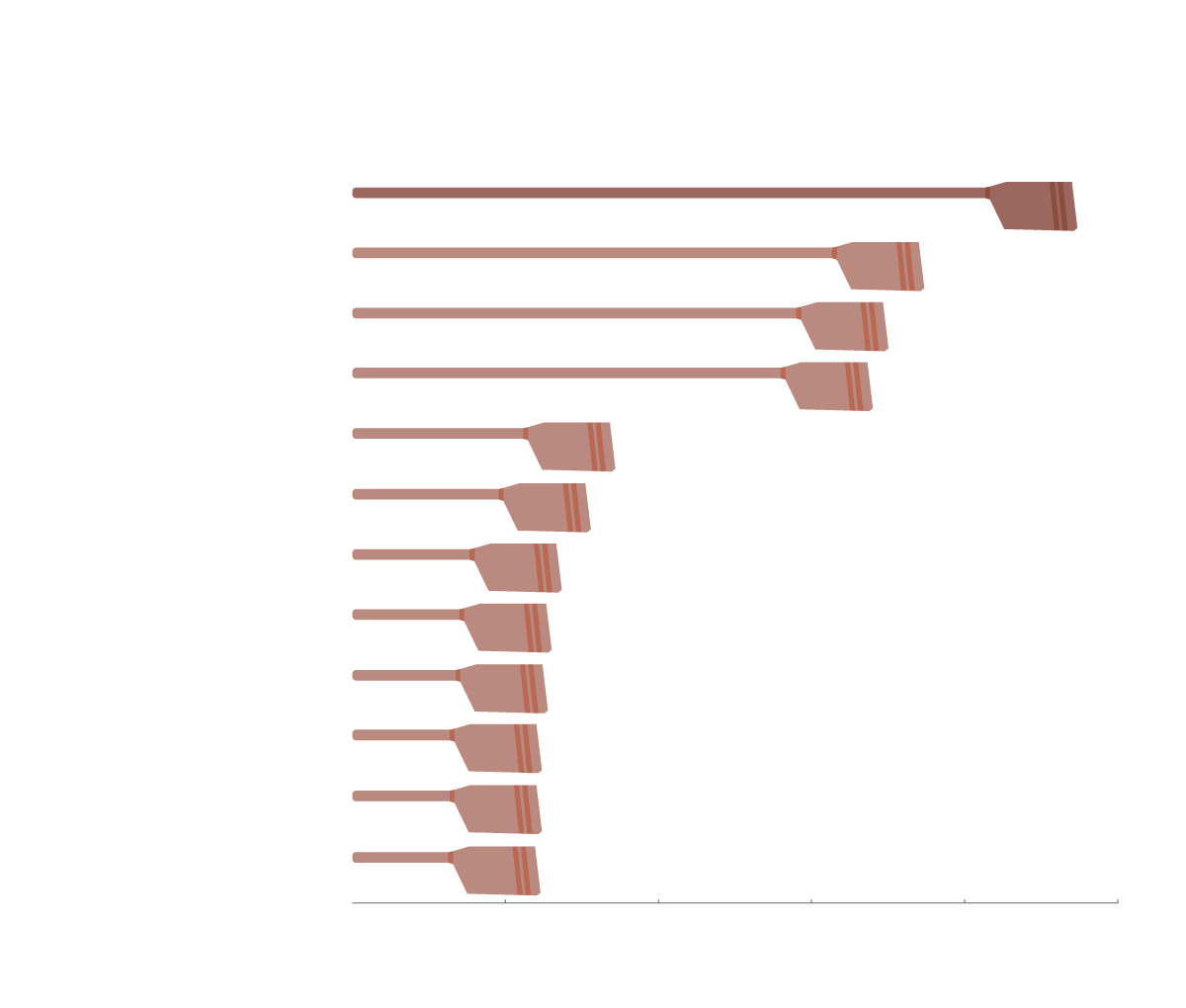 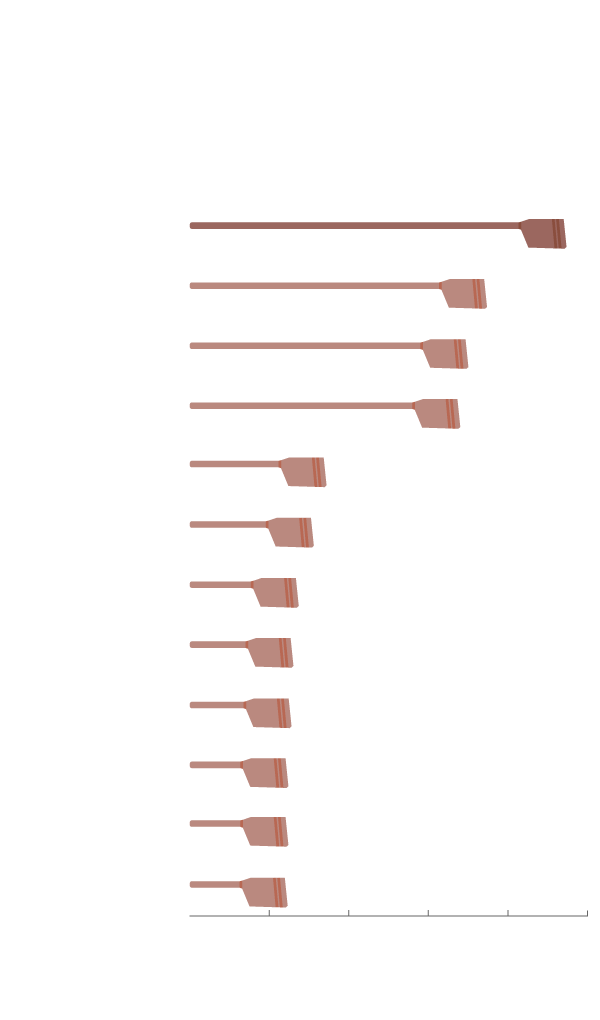 The Columbia men's lightweight rowing team is the

As the lightweight rowing program has gone from the conference basement to the top of the national podium, @columbia_lightweight_rowing has been crucial in attracting new recruits, humanizing the technically innovative program, and crafting a culture and reputation not of legacy and elitism but of “goofball misfits” who row out of trailers and manage to beat the “big dogs” anyway.

“We weren’t really the quintessential Ivy League rower group,” Jakub Buczek, CC ’16, said. He joined the Light Blue in 2012; the Lions’ top boat finished dead last at the national championships the year prior.

“We weren’t necessarily all our top rowers in high school,” he continued. “I would say we were like the dark horse misfits, and that’s maybe the identity we were coming to convey on the Instagram account. We’re a bunch of weirdos with edgy senses of humor, but at the same time, we take training and performance very seriously and want to be the best in the nation.”

Then-juniors Buczek and Colin Ross, CC ’16, created the Instagram in spring 2015 as a side project and a way to document their team’s rise since its 2014 win in the Varsity Four at the IRA National Championship Regatta. While the win was not the main event at the championship, it was Columbia’s first national rowing title in any boat since 1929.

When the account was founded, college sport Instagrams generally stuck to game coverage, recaps, or recognitions of athletes who had hit academic or athletic milestones. Columbia Football’s Instagram, in late 2015, was dominated by professional photos of the team in uniform, helpfully captioned “Team,” “The Pack,” or simply, “#NewEra #RoarLionRoar.” 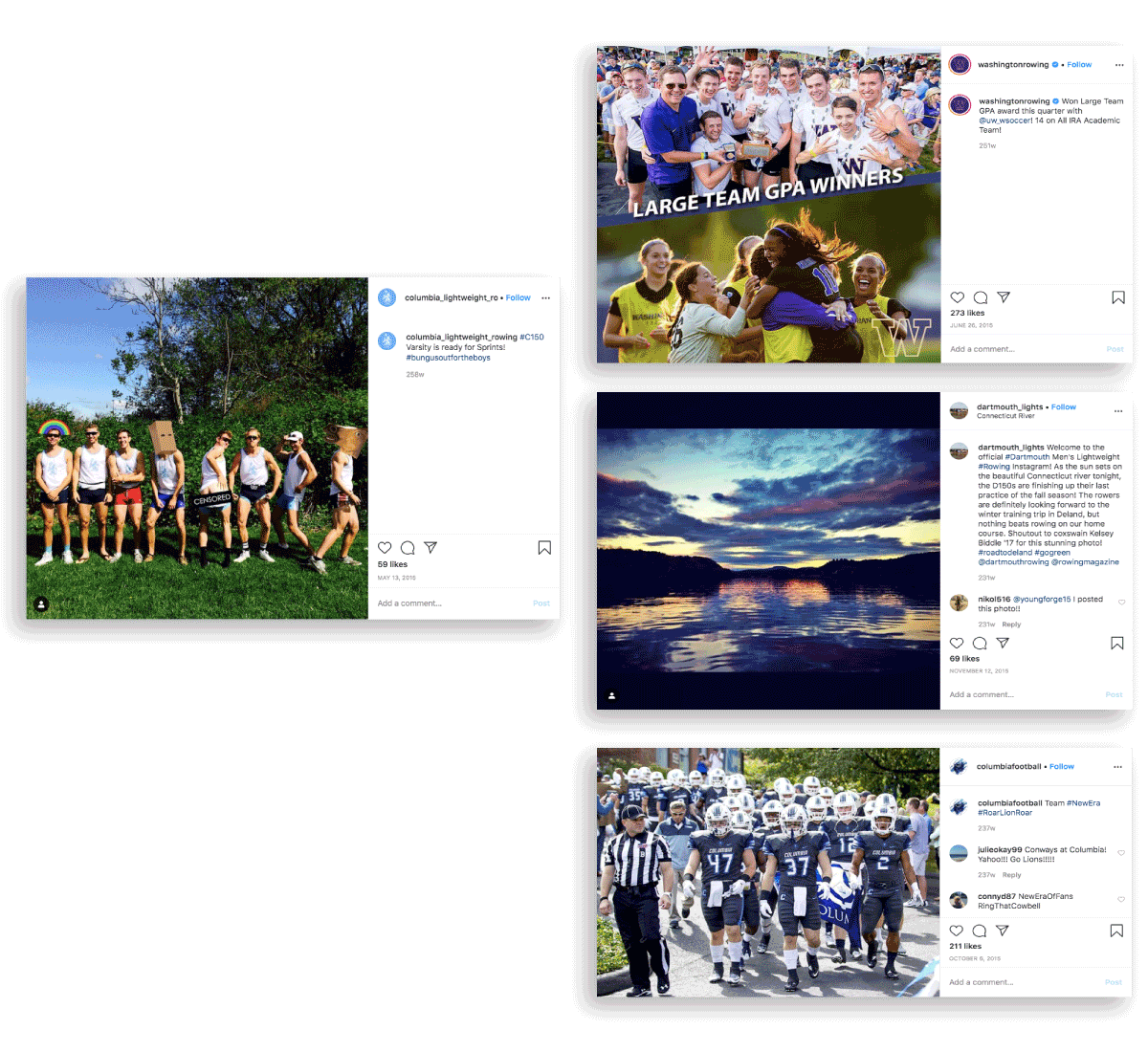 from that of many other collegiate sports

casual, humorous posts, while other Ivy 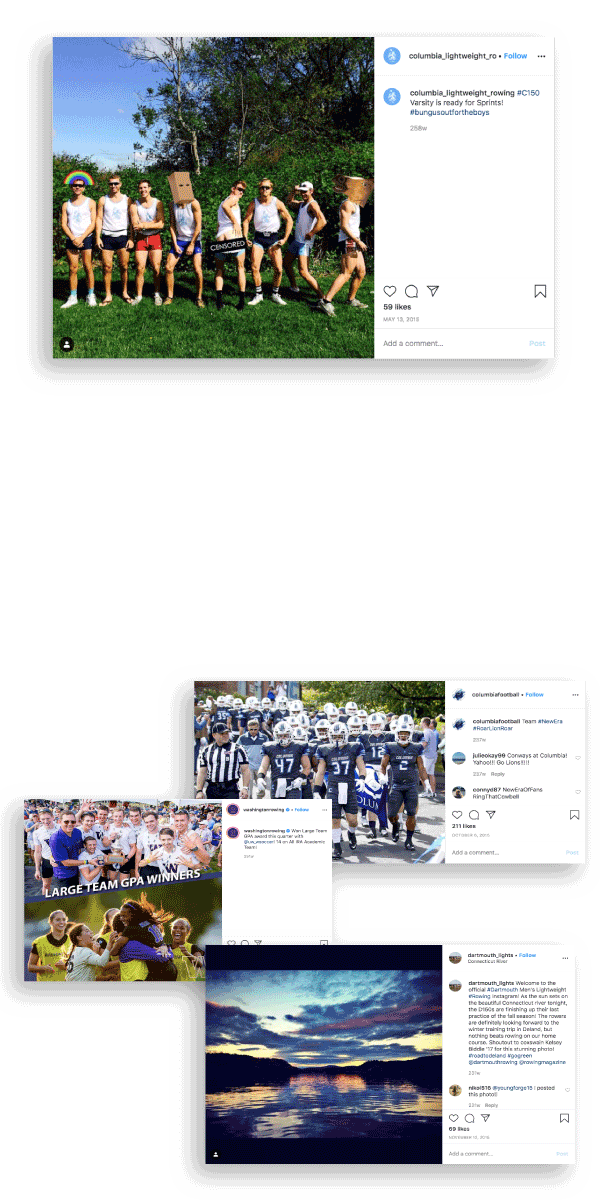 In 2015, five-peat national champions Washington Rowing advertised itself on Instagram as one of the university’s 2014-15 “Large Team GPA Winners.” The Harvard Lightweight Instagram did not exist, the Princeton Lightweight Instagram posted sporadically about dual meets and past race results, and the Dartmouth Lightweights captioned their photos with multiple spell-checked and capitalized sentences.

“When accounts are run by an athletic department or by admins, they can give a really polished look at something, especially at a team,” Ross said. “To go a little more freeform with it and post a little more daily, less-filtered content about training and what it’s like being on the team, I think that can go a long way.”

Buczek, who now rows for the Canadian national team, put it more bluntly. Expressing themselves more organically than other team accounts, the Lions wanted to “see what we could get away with.”

It turned out that they could get away with a lot. The lightweight Lions posted irreverent photos of past hangovers and group shots of emoji-censored, pantless team members. When they recognized alumnus John O’Mara, CC ’12, they joked about his love life and added that he was a “#reptile #lizardskin #swisscheese #sharkman.” With two weeks to go until the national championships, they graced the Internet with a photo of someone dunking his head in a bucket. Like other college sports pages, they congratulated Ironman participants and world champions; unlike others, they gave the same degree of dignity to lightly-censored participants in the Philadelphia nude bicycle race. 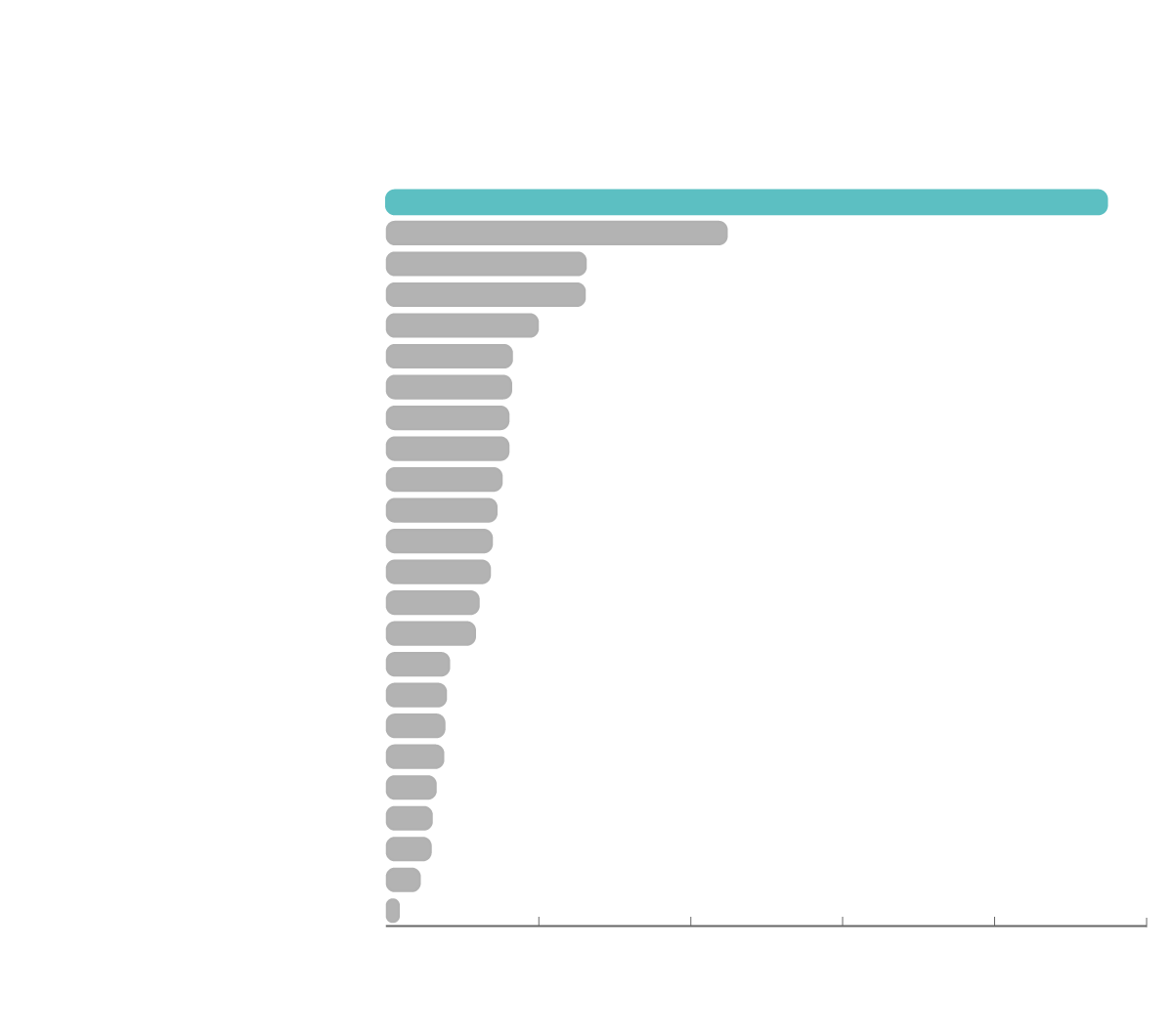 Track and field and cross country 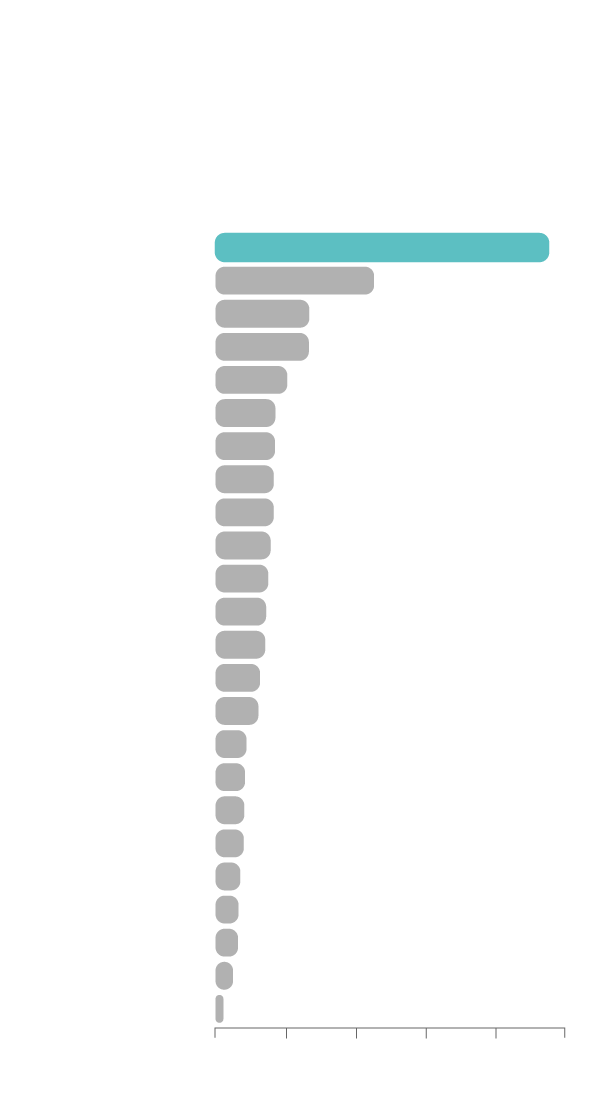 The snarky, fun side of their culture was exemplified in the poodle emoji, a staple of the Instagram page and a badge of membership for many on the team, which originated from an offline inside joke. When someone addressed an email to the team with “Yo, dogs,” Buczek thought it through and began his reply with “Dear poodles”— because, he thought, the poodles were fittingly “pretty-boy” and “smartass” dogs.

This Instagram presence was, in many respects, a publication of a pre-existing team culture that combined the team’s goofiness with extreme technical precision and individual drive. Although the coaches are largely not involved with the page—head coach Nich Lee Parker was not available to comment on this story—it is not decried by the team. The Instagram account has been subtly publicized by the program, as @columbia_lightweight_rowing has been printed on the sides of boats and the lightweight slogan #JustJukeIt is featured on oar shafts.

The team’s Instagram was also used to make Columbia stand out to potential recruits. Every account manager interviewed for this article recounted scores of prospective Lions who asked about the team in direct messages or comments. For a school that had not won a modern national championship until 2016 and still has no roofs, indoor plumbing, or boathouse at its spring training location in Overpeck Park, the page was an invaluable asset.

“If you’re choosing between here and Princeton, Princeton’s facilities are freaking nice,” junior and current page manager Owen Cordaro said. “It’s a short walk from campus housing, beautiful building, they have everything, … but, you know, they don’t have the same culture.” 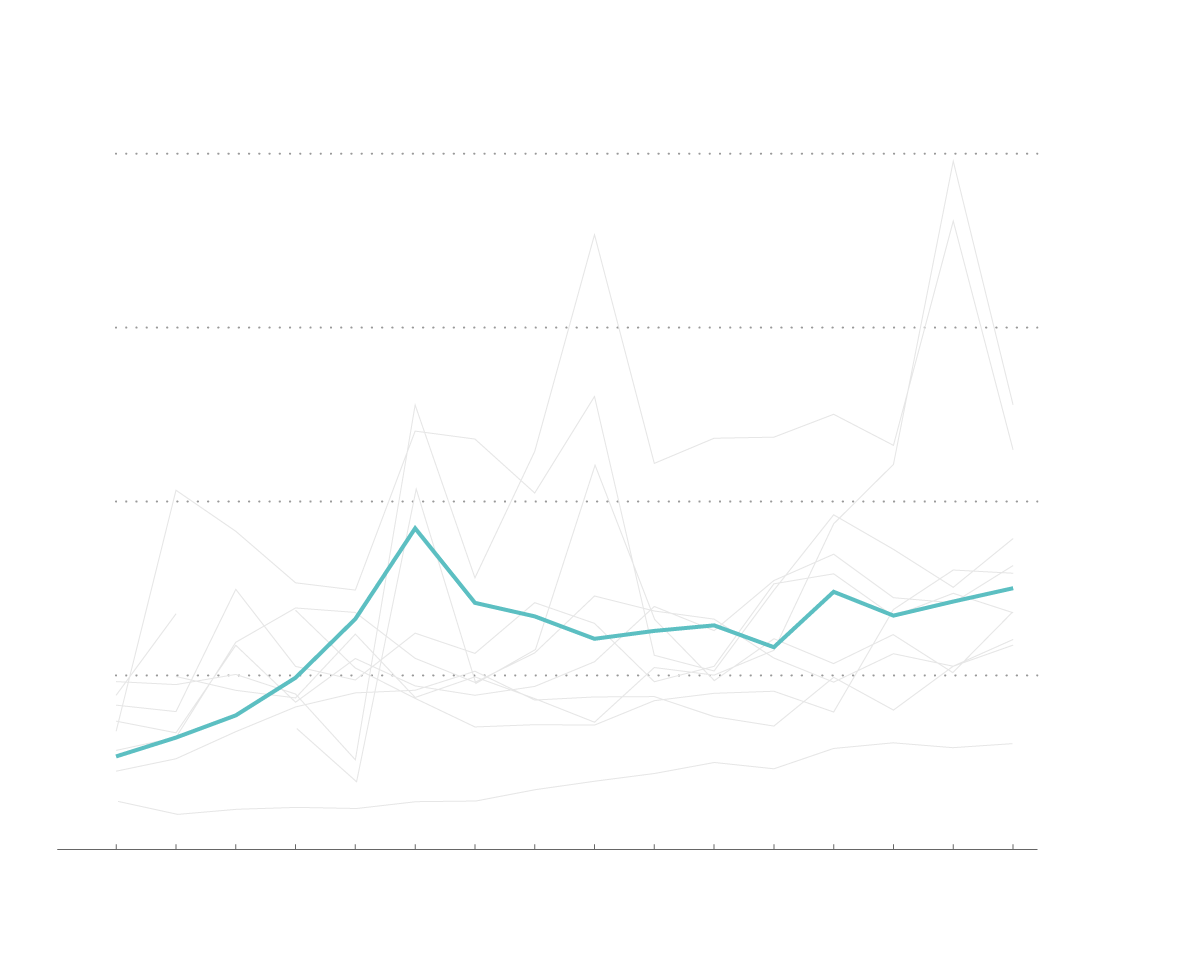 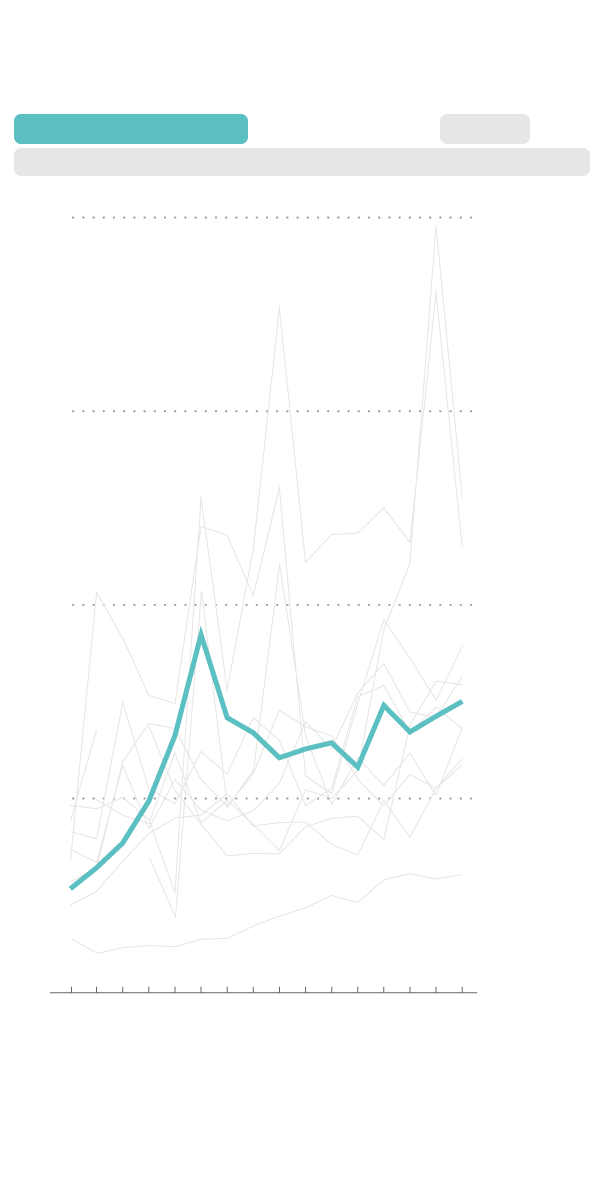 Cordaro joined the Lions in 2017, pulled from other programs in part, he said, by the “awesome” Instagram. Many younger rowers shared his experience, having been drawn in by candids of teammates joking around and working out on high-tech rowing machines, the down-to-earth way the coaches appeared on the page, and by the unreasonable amount of fun they have during grueling training. It combines the elite trappings of Ivy League rowing with inside-jokes, listing a $95,000 trip to the Henley Royal Regatta alongside a new vest for Parker’s dog.

“It put Columbia on the map as a team that you would want to come and row for,” Buczek said. “It was never really considered as a school you’d go to for a stellar rowing program, like Harvard or Cornell, even. So I think we did a pretty good job in enticing some younger guys to come to Columbia.”

And after a younger generation already fluent in the team’s inside jokes and persona joined the team, Cordaro said he has noticed a new unity, which he thinks the Instagram has influenced. There is a “lack of huge egos,” possibly shaped by the knowledge that any goofing off could be documented for posterity on the page. There is a willingness to work hard and, yes, a meme-heavy vocabulary. And although they have won two championships in the last four years, the Lightweight Lions still think of themselves as dark horses.

“We’ve had a culture of having this underdog mentality,” Cordaro said. “You go down to Princeton, you go down to Yale, you go down to Harvard, and everything else—they have these boathouses that have been standing for a long time, incredible facilities. And it’s nice to have the idea that a bunch of us, rowing out of a landfill with our boats on a trailer and we don’t have a place to stretch and warm up, we don’t have the facilities for it, we can go out and compete just as well, if not better, than these other teams.”

And indeed, in the past five years, they have.

Graphics deputy editor Kelly Pu can be contacted at kelly.pu@columbiaspectator.com.