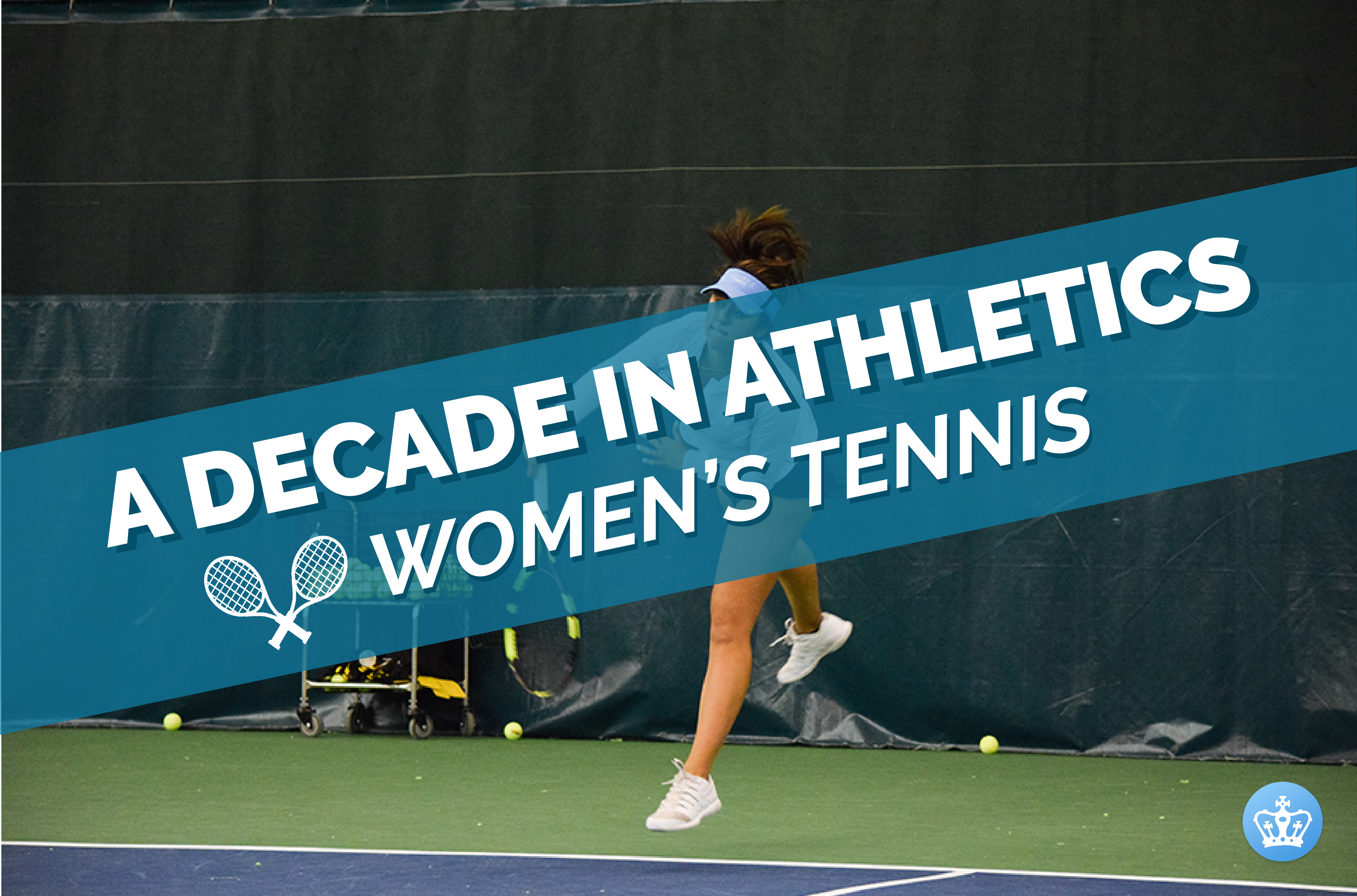 In the 2010s, the Lions cemented themselves as a strong Ivy League program through four ECAC titles, a top-25 ranking, and the team’s first Ancient Eight crown.

All was not rosy for the Light Blue, whose 2010-2011 season saw a 9-13 overall record and a dismal 0-7 in Ivy League play. But the tables quickly turned the following year, when the team drastically improved with a 13-6 record. A momentous 6-1 win over Penn that year clinched the Lions’ first winning Ivy season.

Following an upward trajectory, Columbia earned its first Ivy League title in program history in the 2012-2013 season by toppling Princeton 7-0. The Lions tallied just five losses in each of the 2012-2013 and 2013-2014 seasons and crowned their success with an ECAC title in 2014. In 2016, for the second time in three years, Columbia took the ECACs once more.

The 2016-2017 season proved unsatisfactory for the Light Blue, which faltered (5-16, 1-6 Ivy) after so many monumental moments in the first half of the decade. However, the program regained its footing in the following two seasons to earn winning records in Ivy play once more and had a true resurgence in the 2019-2020 season, when the Lions brought down No. 25 Syracuse University and No. 34 Washington State University to achieve the program’s highest national ranking in history: No. 21.

The loss of the remainder of the season due to COVID-19 was especially devastating for the women’s tennis team due to the immense potential of this year’s squad, which Weintraub said was particularly “cohesive.” Coming off another ECAC win and the impressive overthrowing of Syracuse and Washington State, the Lions had a strong shot at the Ivy title and another NCAA bid. 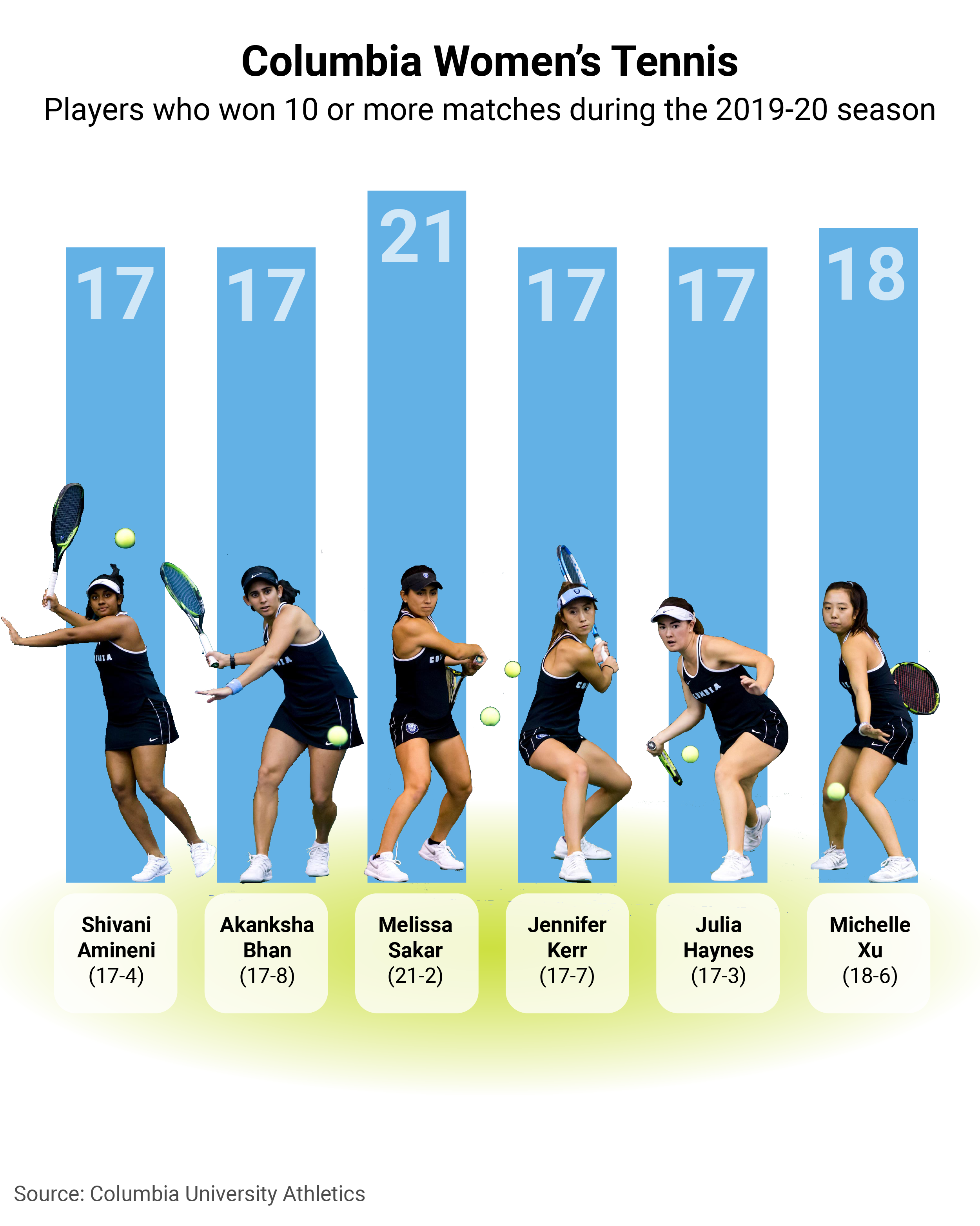 Weintraub knew from the time she was a junior in college that she wanted to return to her alma mater as head coach of its tennis team. As a two-year captain of the Lions, she took on a leadership role during her time on campus. Weintraub quickly realized her dream. After two years as an assistant coach for the Lions and three as head coach of Seton Hall University, she was appointed head coach of the Light Blue in 2007.

Weintraub was a four-year letter-winner for the Lions and served as captain both her junior and senior years. Particularly formidable in doubles, she picked up second-team All-Ivy distinctions in 1999 and 2000.

“I went through exactly what my players are going through—not just tennis-wise but also academically—so some of the decisions I make can reflect that,” Weintraub said.

For instance, aware that midterm season is a particularly challenging time for students, Weintraub makes a point to not compete during that week, or, if the team must play, to only do so at home.

In her 13 years as head coach, Weintraub has revealed a knack for developing strong recruiting classes for the Light Blue. She said the first two things she looks for in a prospective Lion are athleticism and character.

As a result, three of the recruiting classes under Weintraub have been ranked in the top 15 of the nation by the Tennis Recruiting Network. The class of 2015 registered a No. 6 ranking and was slotted No. 10 and No. 12 in 2017 and 2018, respectively.

In addition to holding the distinction of the program’s all-time winningest coach, Weintraub earned the ITA Northeast Region Coach of the Year award in 2014 and 2016. Under her guidance, the Lions claimed several program firsts, including their first Ivy and ECAC titles and their first appearance at the NCAA tournament.

Having spent just three years away from her alma mater since graduation, Weintraub’s already-historic legacy as a coach is inextricably tied to Columbia’s. She still counts women’s tennis’ first Ivy title in 2013 as “one of the best days of [her] life.” 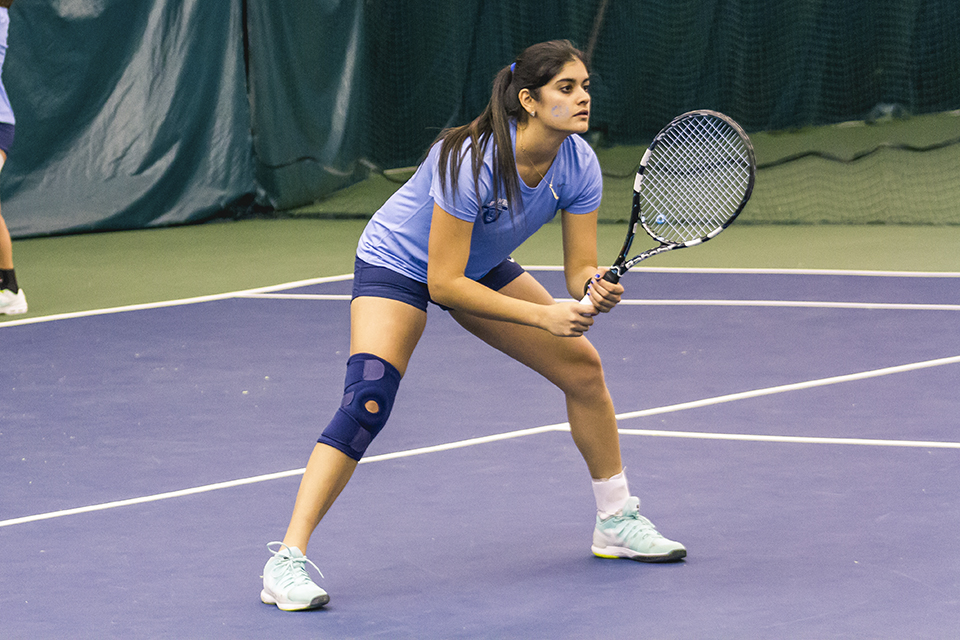 It was a momentous occasion for the Lions, who put a distinctive finish on an already-historic 2011-2012 season by beating the Quakers 6-1. The last Ivy win of the season sealed the Light Blue’s first winning Ivy season—the team went 4-3 in Ancient Eight play—as well as its winningest season to date, with 13 victories and just six losses.

The Lions had the match clinched before the No. 1, No. 4, and No. 5 singles finished their matches. Singles play continued, however allowing for then-junior Nicole Bartnik to claim a perfect 7-0 record in Ancient Eight play, all from the No. 1 slot.

The Light Blue nearly blanked the Quakers but lost the final match of the day in the No. 5 position. Then-junior Chelsea Davis jumped out to a first-set lead 7-5 but fell in the second 6-2. She lost the close tiebreaker 10-7 to afford Penn its only point of the match.

Though this game marked the first winning Ivy season for the Lions, it would soon become a regular occurrence as Weintraub continued to pull in powerful recruiting classes for the Light Blue.

The women’s tennis team made history again in 2013 with its first Ancient Eight crown in program history. After a 7-0 blanking of Princeton—the team’s first victory over the Tigers since 2005—Columbia needed Yale to fall to Harvard that same day to claim a share of the Ivy title.

It was also Senior Day for the Light Blue, which recognized Katarina Kovacevic, Lucy Leopold, and Nicole Bartnik. Bartnik would later pick up her second straight Ivy League Player of the Year award after leading the Lions the past two years. She was also the Intercollegiate Tennis Association Northeast Region Senior of the Year in 2013.

To celebrate the win, Weintraub said, players, families, and alumni crowded into Carmine’s Italian Restaurant on the Upper West Side to await the news at Harvard. After multiple phone calls, the team finally learned that the Crimson had won.

“The entire restaurant just erupted in this loud scream and people were dancing,” Weintraub said. “It was a great moment.”

The Lions earn their first ECAC title with a home win over Yale in 2014.

For the first time since 2006, Columbia beat the Bulldogs, and in convincing fashion, 4-1. But the real prize was even bigger: the Light Blue’s first ECAC title.

After splitting the No. 1 and No. 3 doubles matches, Columbia secured a win in No. 2 doubles to take the doubles point. The Lions’ then-junior Crystal Leung and then-first-year Tina Jiang found themselves down 3-5 before winning three straight games. Yale recovered to knot the score. The following tiebreaker proved just as tight, with the pair needing to overcome a 3-6 deficit to stay in the match. They rattled off five straight points to win the match.

The singles rounds proved to be just close; both the No. 1 and No. 2 matches went into tiebreakers. Then-sophomore Kanika Vaidya took down Madeleine Hamilton 7-6, 6-0 in the No. 1 slot to boost the Lions’ lead.

At the time, the Bulldogs were ranked No. 32 in the nation, and Columbia sat at No. 51. The upset of Yale rocketed the Lions to No. 35, where they stayed for two weeks.

Ranked No. 2 in the Ivy League, the Lions beat the No. 1 Tigers by a definitive 4-1 score during the 2019 ECACs to mark their second regional conference title while also preventing Princeton from earning its second straight ECAC win.

It was a bit of a slow start for Columbia, which lost the doubles point to Princeton before rallying to pick up four straight singles points behind wins from then-sophomore Christie Wan, then-senior Sarah Hu, and then-first-years Akanksha Bhan and Melissa Sakar. The victory not only snapped a four-game losing streak against Princeton but also marked a particularly monumental moment since at the time, Columbia’s all-time record against the Tigers was a disappointing 4-27.

Not to be outdone, the 2020 ECACs were the most dramatic yet for the Light Blue. The responsibility to break a tie in the championship match over Yale fell to first-year Shivani Amineni, who faced off against the Bulldogs’ Raissa Lou at No. 5 singles. Lou dominated the first set 6-1, but Amineni fought back to take the second set in a tiebreaker. After a close third set, Amineni edged out Lou 6-4 to register the win for the Lions.

“I think that was really inspiring seeing a freshman do it, overcoming that pressure, even though you just were introduced to the spring season,” Sakar said. “I think that was a really really crucial moment as a team to defend the title and it just made it even better that our freshman was able to pull through for us.”

It was Columbia’s second consecutive ECAC title and fourth since 2014. The Lions, including Amineni, Sakar, and Bhan, will return to next year’s ECACs in hopes of pulling off a three-peat.

In 2019, Bhan makes history as the first athlete in program history to advance to the main draw of ITA All-American.

Four Lions competed at the ITA All-American in Tulsa, Oklahoma—one of the four Grand Slams of college tennis—with sophomore Akanksha Bhan becoming the first women’s tennis player in Columbia history to advance to the main draw of the tournament.

Other Columbia athletes who competed in the pre-qualifying tournament included junior Paulina Ferrari, junior Jennifer Kerr, and junior Christie Wan. Ferrari teamed up with Bhan to take down teams from Oklahoma State and Auburn. The pair dropped out of the tournament with a loss to Wake Forest’s Anna Brylin and Saby Nihalani.

Meanwhile, Kerr and Wan won just one match, against No. 45 Washington before losing to Tatum Burger and Anna Riedmiller of Denver.

Bhan remained the lone Light Blue competitor, winning six of her eight singles matches to earn a spot in the main draw. Bhan defeated three nationally-ranked opponents during the tournament.

“I was always like I want this, I want this really bad, because I knew how much it meant to me and my team and Ilene,” Bhan said.

Weintraub called Bhan “one of the most selfless players [she’s] ever had the pleasure of coaching” and noted that the sophomore was nationally ranked throughout the entirety of the season.

If not for COVID-19, this season would have been remembered for its upsets.

The Lions set their sights on an even loftier goal than another Ivy title in the 2019-2020 season, overthrowing nationally-ranked No. 25 Syracuse and No. 34 Washington State. Both matches were nail-biters: Columbia topped the Orange and the Cougars 4-2 and 4-3, respectively.

The win elevated the women’s team to its highest-ever national ranking as a program, pushing the Light Blue into a coveted top-25 spot at No. 21.

Syracuse is the highest-ranked opponent the team has ever defeated. The Light Blue did not hesitate for a moment, claiming the doubles point with wins by junior Jennifer Kerr paired with first-year Shivani Amineni, and sophomore Akanksha Bhan with junior Paulina Ferrari. The Lions increased their lead when sophomore Melissa Sakar topped Syracuse’s Sofya Golubovskaya, who retired after Sakar won the first set 6-2.

But it was Amineni who ensured a Columbia victory, overtaking Sofya Treshcheva 7-6 (7-0), 7-5. And it would be another first-year, Julia Haynes, who would clinch another memorable Light Blue victory against Washington State two short days later.

The Lions found themselves even with the Cougars at 3-3 with just Haynes’ match left to play. Haynes found herself in an arduous three-setter, winning the first set 6-2 but losing the second 6-4. Viewers and teammates lined the outskirts of the court as Haynes battled to a 7-6 third-set comeback against Washington State’s Yang Lee.

“[Washington State] was definitely the closest win we had for sure,” Ferrari said. “We were competing so much as a team. After Julia clinched that … that was the moment where we really felt like this is the reward for all of the hard work that we’ve been putting in.”