‘I’m not going to change because of a losing record’: Why the men’s basketball team’s faithful keeps coming back

‘I’m not going to change because of a losing record’: Why the men’s basketball team’s faithful keeps coming back 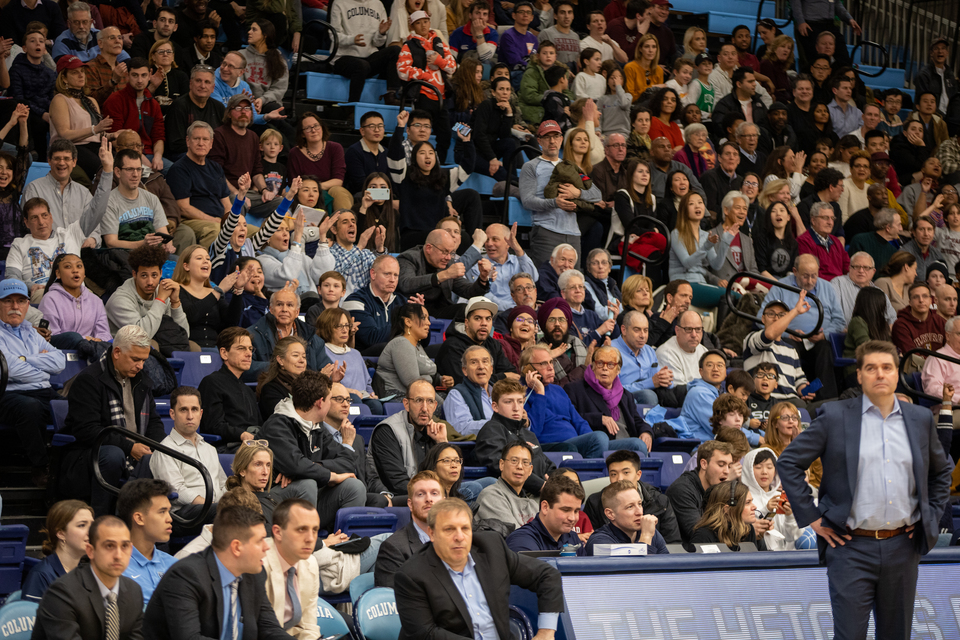 Despite a 6-24 Ivy record, men’s basketball continued to have high turnout in the stands.

Since the inception of major league and collegiate athletics, there has been a large following of superfans—even for teams that struggle to perform.

And for the Lions, who have a notoriously mediocre history, loyal fans have filled the stands. Men’s basketball has not had a winning season since 2015-16 and cannot compare to the national success of the fencing, cross country, and men’s tennis programs. Surprisingly, during the 2019 Giving Day, the men’s basketball program raised $251,000—more than any other team, including football. On the other hand, the women’s basketball team only raised $90,400.

Women’s collegiate athletics have a much shorter history—especially on Columbia’s campus, which did not go coed until 1983—so they have had less time to gather a fan following.

“Men’s sports are considered popular because that was the only thing that [was] offered. So that’s where the fans were. Women’s sports really didn’t start at the college level until Title IX passed in 1972, so women’s sports are at where men’s sports were in the 1950s,” sports economics professor David Berri of Southern Utah University said.

Even in what was the worst season under men’s head coach Jim Engles to date, the Columbia men’s basketball team continued to draw out fans to Levien Gymnasium. The Light Blue currently garners the third-highest attendance in the Ivy League, even though the team has lost 13 consecutive Ivy League games.

For Columbia’s most die-hard fans, what keeps them coming back to Lions’ games week after week is not the success of the team—instead, it is the community they have built around it.

For some fans, that commitment extends back for more than 70 years.

“The only time I didn’t have a season ticket was when I was in Vietnam, so I love these games,” Jovin Lombardo, CC ʼ61, said.

For Ron Kapon, CC ’56, Business ’57, Columbia basketball has been an omnipresent force in his life ever since his dad brought him to his first game in 1947. For decades now, Kapon has held season tickets for both the men’s and women’s teams, despite their traditionally weak performances.

In 1952, Kapon, then a first-year at Columbia College, was enrolled in a boxing class led by then-head coach Lou Rossini. Rossini, who neglected to provide the students with headpieces or mouthguards, put the 165-pound Kapon up against an opponent who he claims weighed over 300 pounds. As could be expected, Kapon was knocked out within seven seconds of the bout. Rossini, who felt bad about subjecting the 18-year-old New York native to the beating, offered Kapon the opportunity to work with the program and scout the other teams. For Kapon, his relationship with basketball was truly love at first punch.

That relationship has only intensified. Kapon has gone to great lengths in order to see the Light Blue. During the 1968 season, Kapon was living in Chicago, but he was determined to see his beloved Lions finish atop the Ancient Eight for the first time in 17 years.

However, when he reached out to then-head coach Jack Rohan to help him get tickets for the sold-out playoff game at Princeton, Rohan told Kapon he was on his own. In response, Kapon reached out to the only other person he could think might be able to help him: Princeton’s head coach Pete Carril. That is how, during the biggest game in Columbia basketball history, Kapon found himself sitting on the opponent’s bench.

While not all season ticket holders have long histories like Lombardo’s and Kapon’s, they are just as driven to support their Lions. For Dominick Boyce, Public Health ’93, college basketball games are a chance to experience sports up close and personal.

Boyce gave up his New York Knicks season tickets and started attending Columbia games regularly when he became disillusioned with the commercialization of professional basketball.

“I was a former Knicks season ticket holder, and it’s just not the same,” Boyce said. “It’s more commercial, the audience and the fanbase, but this is a following.”

“I like amateur athletics, and these games … are great. It’s the real spirit of sport,” Lombardo said.

According to Allen McConnell, a psychology professor at the University of Miami, people flock to sports fandoms due to the community around a team rather than the team itself; being a member of these communities has been proven to improve self-esteem and pride. Columbia basketball’s most ardent followers have created a community of their own and appear so consistently that, according to Rolando Acosta, CC ʼ79, Law ʼ82, if one of them doesn’t show up to a game, the rest immediately worry that something has gone wrong.

“I have season tickets to basketball, and when one of us is missing, I constantly get calls like ‘Where have you been?’ so I can’t miss a game,” Acosta said. “It’s a very close-knit community.”

For many season ticket holders, it is the sense of community within this group of avid fans that keeps them coming back.

“It’s not dedication. I’ve been called a groupie. I’m not a groupie. I have no interest in knowing the coaching staff or the people behind the scenes. I don’t want to know them because then you lose your right of criticism,” Boyce said.

Despite the Lions’ failure to win an Ivy League championship since 1968 and their recent struggles this past season, the fact that this community insists on attending every game is a testament to its loyalty to the team. Kapon, one of the few fans who actually witnessed that last championship, hopes that the Lions can put an end to this inauspicious streak.

“I’m going to be 85 in July. It would be nice if I could go to an NCAA game with Columbia before I’m dead,” Kapon said.

But for some fans, the success of the team does not even cross their minds. The Light Blue’s performance does not affect how Paul Marino, CC ’74, views the team, nor will it change whether he continues to attend Columbia basketball games.

“What brings me back is simple. This is my university. The school did right by me, did right by my daughters. I love this school. I love seeing the kids. I love competition. Even though they’re having a tough year this year, it shows a lot of character to come out, play real hard. They do the best they can all the time,” Marino said.

Engles understands the fans’ frustration over having not won in so long, and he respects their dedication to the team. But he acknowledged that he was more concerned with improving the program than focusing on fans.

“I don’t go home at night thinking, trying to wonder what’s going on with them. I can’t. I don’t have enough mental energy to do that,” he said.

However, the fourth-year coach is confident that if fans give him and his staff a chance, the Lions’ luck will turn around.

“From the bottom of my heart, I appreciate them coming to the games, and I just ask them to be patient so that we can continue to build,” Engles said.

While many fans are frustrated at the Lions’ lack of success, they will not stop showing up any time soon. Fans like Boyce will show up for their team, win or lose.

“There are going to be highs and lows. But the one thing that remains the same is the University community and how we support each other during good times and bad times, so I’m not going to change because of a losing record,” Boyce said. “It’s about the connection to a community that we’re all a part of.”