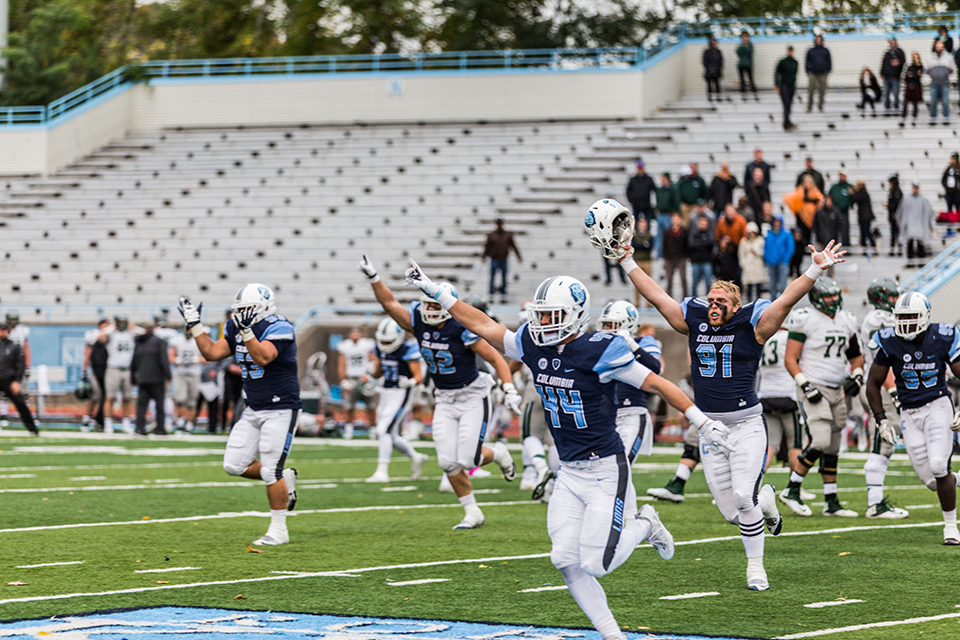 On Oct. 14, 2017, the Light Blue dismantled a strong Quaker defense for a stunning overtime Homecoming win.

Down by 3, the Lions are at the 24-yard line with three down and nine yards for a first down. Captain and quarterback Anders Hill, CC ’18, scans the endzone looking for the opening and spots then-first-year wide receiver Josh Wainwright in the middle. Wainwright catches the ball and rolls into the endzone to win the game. In that instant, fans donning Pantone 291 rushed the field as the Homecoming game marked that the 2017 season was going to be one for the books.

It was only four years ago today that Columbia defeated the University of Pennsylvania during Homecoming to get to a 5-0 record and to continue its undefeated streak—its first 5-0 start since 1996. The matchup went into overtime before the Lions defeated the Quakers 34-31 after an astonishing comeback.

Going into the fourth quarter, the Lions were trailing 21-7; it seemed like coming back from this deficit would be a Herculean task. But momentum slowly started to build up for the Light Blue after then-first-year quarterback Josh Bean ran into the endzone, making it so that Columbia only needed seven more points to tie the game. The Light Blue continued to play hard, bringing the score back to a tie; Hill found Wainwright for the 59-yard pass into the endzone, bringing the game to 21-21.

Columbia kept its foot on the gas when Hill found tight end Rory Schlageter, CC ’20, to give the Lions the lead for the first time in the game at 28-21. But Penn quarterback Will Fischer-Colbrie found wide receiver Justin Watson with 1:21 left to play, tying up the game at 28-28 and forcing overtime.

After winning the coin toss, the Light Blue elected for the Quakers to take possession of the ball first. The Lions' defense continued to have a strong showing with Michael Murphy, CC ’20, tackling Watson for a loss of 7 yards, pushing Penn 17 yards from the first down. Columbia stopped the Quakers' next two plays, forcing them to punt for the field goal.

Then only down by three, the Lions just needed a field goal to tie the game and triumph in this matchup. The Light Blue got the ball back on the 25-yard line and started slowly with its first two rushing plays. But on third and nine, Hill found the opening in the Quakers' defense and lobbed the ball to Wainwright to end the game 34-31.

This triumph marked the Lions' second back-to-back Homecoming victory and the first time Columbia defeated Penn in over 15 years. This 5-0 start would lead to the Lions finishing their season tied for second on the Ivy table. This game was only the second time the Lions left Homecoming with an undefeated record, the last time being in 1996.

Unfortunately, 1996 was a fluke, and the 2017 Lions met the same fate: preceded and followed by seasons of unmet expectations. While the 2019 season had flashes of greatness—another miraculous Homecoming win and the Lions' first defeat of Harvard in 15 years—the 2019 team also fell to conference bottom-dwellers.

However, this Homecoming was more significant than just wins and a perfect streak; it also contributed to a shift in funding for Columbia Athletics. Giving Day —the largest annual alumni donation day pushed by the University each year that takes place just days after Homecoming—saw an increase in donations to the athletic department by nearly 30 percent. According to Athletic Director Peter Pilling, the Homecoming win allowed alumni to see Columbia’s sports teams as successful programs, and encouraged them to donate.

“Homecoming opened up a lot more doors,” Pilling said in a 2017 interview. “I get daily reports of contributions that are made to the athletic department, and we’ve seen a nice push because of it [Homecoming]. Our development staff talked to a lot of our key donors, and made sure they understood the purpose of Giving Day.”

For Columbia Athletics specifically, Giving Day is integral to the program’s ability to pay for its equipment, coaching salaries, and cost of travel. One day before the Homecoming game, Pilling said that Athletics held a banquet dinner to recognize alumni and donors for their support of the program. At that dinner, football head coach Al Bagnoli emphasized that top-tier performance should be consistent throughout the program and that continued support from alumni was necessary for the team to remain successful.

Alumni engagement was one of Pilling’s main goals when he took the helm of the department. Under Pilling’s tenure, both attendance at games and donations to the athletic department have increased, and the team’s overall performance has improved as well. Homecoming 2017 was a culmination of Pilling’s efforts to reinvigorate alumni, finally getting over the “two million-dollar hurdle” Athletics had struggled with for years on Giving Day and creating high expectations for Columbia football’s athletic dominance. The heights of the 2017 season were not matched in 2018, nor 2019—during which the Light Blue was unable to achieve a .500 record.

Perhaps that historic mediocrity will change in the 2021 season. However, there is no more Anders Hill, and there will no longer be a Josh Bean or Josh Wainwright. Instead, fans will have to look back and cherish that moment when Hill found Wainwright for a rush into the endzone, catapulting the ball for a come-from-behind victory in overtime.

That miraculous win was once thought to be a sign that the Columbia football team would top the Ancient Eight. While that has not been the case, the 2017 Homecoming game will go down as one of Columbia’s greatest athletic performances of all time.