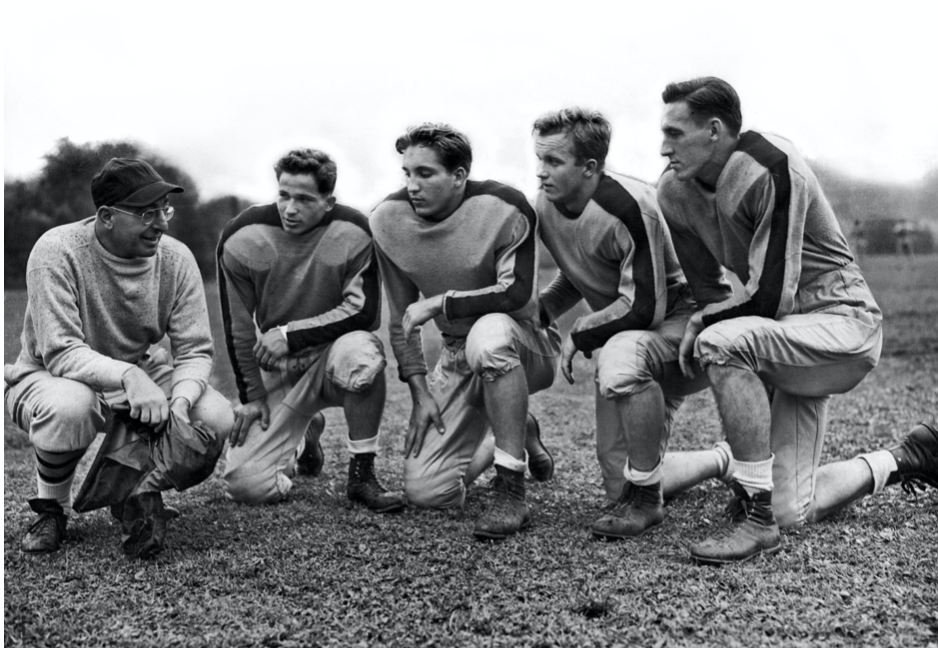 Gene Rossides, CC ’49, is remembered for his performance during Columbia’s historic win against Army, snapping the Cadets’ 32-game winning streak.

On October 25, 1947, Baker Field was filled with 35,000 fans, despite having a seating capacity of only 32,000. The large crowd was vibrating with excitement. They were anticipating the long-awaited game between the Columbia Lions and the Army Cadets. Unbeknownst to the audience at the time, Columbia would upset Army and subsequently end its 32-game winning streak.

Among the stars of the game was Gene Rossides, CC ’49, whose adeptness under center cemented him in the Light Blue’s history. Rossides died on May 16, just five months before the 73rd anniversary of the historic upset against the Cadets. The quarterback enrolled at Columbia just as World War II drew to a close. With the country still reeling from a tumultuous six years, Rossides and one of Columbia’s best football teams tried their luck against Army’s powerhouse, and in an unlikely twist, came out victorious.

After a 34-14 loss to the University of Pennsylvania, the Lions were uneasy about their prospects to beat the undefeated Cadets. After a coin toss that favored the Cadets, Columbia received the ball from Army. However, the Light Blue’s offense was overwhelmed after only four plays and was forced to punt the ball. The Cadets, led by quarterback Arnold Gallifa, scored with their first possession of the ball. Jack Mackmull’s successful field goal attempt increased the lead to 7-0.

The second quarter saw a shift in the dynamics of the game. After letting the Cadets score another touchdown, making the score 14-0, the Lions were determined to turn the tide of the game.

Rossides threw three consecutive first-down passes, but at first, his stellar performance appeared to be for nothing, as the Lions were unable to penetrate the Cadets' defense. Eventually, though, halfback Lou Kusserow, CC ’49, was finally able to surpass the almost insurmountable Army defensive line in order to score.

Rossides was already a star before this game. Despite being nominated to the 1945 College Football All-American Team, he is best known for his performance in the 1947 game against Army. His daughter Elini remembered her father telling her about the matchup. She described the game as “monumental, maybe even transformative.”

“There were just so many that it inspired and influenced … [my dad was] the underdog, an immigrant, ready to take on the giant,” Elini said.

After receiving a call from National Football League champion quarterback and former Lion Sid Luckman, who had gone to Rossides' high school, Rossides decided to play at Columbia. Rossides' hunger to compete brought him to head coach Lou Little and this face-off against the Cadets.

Army had not allowed an opponent to score for the first four games of its 1947 season. With this touchdown, the Lions finally broke the shutout streak that the Cadets had been boasting about. After a successful field goal attempt, it appeared that the underdog Light Blue had started to gain some ground against the mighty Cadets. However, nearing the end of the second quarter, Army again scored to make it a two-possession game. However, after the Cadets' failed field goal attempt, the first half of the game ended with Columbia trailing 20-7.

During halftime, Elini recalled, “My dad took over the [halftime] meeting. He didn’t let the coaches talk. He was furious because he thought [Columbia] should be winning … he thought they had given up opportunities. He really whipped everyone up.”

As the Lions entered the second half of the game—after being galvanized by Rossides—they were determined to continue their scoring and tightly-knit defense. The latter was prevalent throughout the entirety of the third quarter as they refused to let the Cadets score. The farthest the Cadets were able to pierce through the Light Blue’s defensive prowess was the Lions' 15th yard line. However, Columbia also failed to score in the third, only managing to get to the Army’s 25th yard line on its best drive. After a scoreless third quarter, hope for the Lions' victory seemed bleak as they continued to trail 20-7.

As they entered the final quarter of the game, Columbia finally began firing on all cylinders. Early in the fourth quarter, Rossides led the Light Blue downfield, completing a long, contested pass to Bill Swiacki, CC ’48, in the endzone. Swiacki dived over an Army defender in order to barely catch the ball before it hit the ground. After an unsuccessful challenge on behalf of Army that questioned the legitimacy of the catch, Vinnie Yablonski, CC ’48, completed his field goal attempt with ease to make the score of the game 20-14.

Despite being down by six, the Lions' second touchdown had afforded them a jolt of hope. The chance to end Army’s 32-game winning streak seemed in reach. Led by left tackle Hank Briggs, CC ’49, a strong Columbia defense did not allow the Cadets to get past the Lions' 28th yard line. Now in possession of the ball, Rossides achieved consecutive first down runs. When the mighty Lions reached the Army’s 29th yard line, Rossides made a long pass to Swiacki, who captured the ball at the Army third yard line, but was unable to score as he was surrounded by Army’s men.

Elini mentioned that before he threw this key pass, Rossides was hit and knocked down. “He didn’t see the completion,” she said. “But he knew it was successful when he heard the crowd roar.”

Two plays later, Kusserow was finally able to score. After yet another amazing kick from Yablonski, the underdog Lions were finally ahead of Army with a score of 21-20.

Though Rossides' performance is often remembered as the highlight of the game, Elini said her father credited Columbia’s defense for holding back the Cadets for the final 8:22. Army’s final hopes for saving their undefeated streak were crushed when Kusserow intercepted an Army pass. When the time ran out, Columbia was in possession of the ball. They had done something that no one thought was possible: the Lions had ended Army’s 32-game winning streak.

Elini, a former professional tennis player whose stint at Stanford resulted in four straight team championships, remembers an encounter she had with one of her tennis coaches: “I briefly told him my dad was a great football player at Columbia. And then when [my father and I] went to the US Open, hundreds and hundreds of people came up to him. [My tennis coach] then said, ‘Can you tell me the story about your father again?’”

Rossides was the pinnacle of an Ivy League student-athlete. The quarterback turned down an offer from the New York Giants in order to attend Columbia Law School on scholarship. He went on to practice law in New York and serve in the Eisenhower administration.

Despite his countless achievements in both football and government, the quarterback of the “greatest backfield ever produced on Morningside Heights” is remembered by those who loved him not for his accolades but for his devoted parenthood. When speaking about her late father, Ellini said that his defining characteristic was “loving.”

“My relationship with my dad was wonderful. He was the best. You all probably know about all of his accomplishments, but he was a better father than all that he accomplished.”