After months of consideration and student and faculty feedback, the Columbia University tobacco workgroup has proposed a ban on smoking within the campus gates.

New York laws prohibit smoking within 25 feet of a building.

Scott Wright, vice president for student auxiliary services, said that he was approached by a director from Columbia Health Services who wanted to look into whether or not the smoking regulations were adequate on campus. As a result, Wright proposed developing a workgroup to look into smoking measures.

The on-campus smoking regulations, faculty and Health Services members suggested, may be in for an update, especially as New York law cracks down on smoking in certain outdoor areas. After comparing opinions from people working and living in buildings across campus and those who would be most affected by smoking, the workgroup began to wonder if it would be possible to make Columbia smoke-free within the gates, an idea that the group ran with.

The proposal is to create a "smoke-free core of the Morningside campus, including all areas within University gates," according to Columbia Student Services. Currently, smoking is banned at Barnard and Teachers College as well as at the Union Theological Seminary. Under the proposal, smoking would be banned from 114th to 116th streets between Amsterdam and Broadway as well as from East Campus closer to Morningside Park.

Columbia College Student Council Vice President of Policy Adil Ahmed, CC '09, is the student member of the workgroup comprised of representatives from Health Services, Public Safety, and Columbia University Housing and Dining as well as members and directors of the Alice! Health Promotion Program, whose office spearheaded the proposal.

The workgroup solicited feedback from students "who were disturbed," Ahmed said, by their exposure to campus smoking. People working or living on lower building floors can also be hit particularly hard by secondhand smoke—people at Low Library, for instance, can be exposed to an unusually large amount of smoke from students frequently gathered outside of the building on cigarette breaks. The workgroup collected opinions in ongoing open forum feedback sessions and in online surveys.

But in an informal poll last week, Ahmed said this Sunday at the council meeting, CCSC voted almost unanimously against the proposal, and they passed a resolution in opposition to it in this weekend's meeting. While the proposal floated around CCSC for several weeks, it failed to gain traction in the council. Many members said they felt it would be too difficult to enforce and could be a misuse of resources. Both Ahmed and Wright have agreed that enforcement could be a problem.

"We don't have NYPD on campus who would deal with that," Wright said. "That's probably two steps beyond where we are right now. My guess is that it would be a bit like how we deal with dogs on campus."

Still, Wright pointed out that the proposal was just a preliminary look into possible regulation changes. Nobody on the workgroup, he said, had the power to enforce the policy. The feedback will be forwarded to the University administration, and a decision on the proposal is not expected until sometime this summer.

"No one is trying to jam new policies down your throat," Wright commented at CCSC.

The workgroup noted on the Student Services Web site that new smoking regulations could improve campus facilities by cutting down on litter and fire hazards and that they could cut costs involved in large-scale staff cleanup associated with smoking. The group noted that this proposal is coming at a time of increased regulations—city, state, and federal—on smoking and that it is consistent with the "decrease in number of smokers and increase in community support for more smoke-free zones."

But implementing new rules on a much larger campus may be difficult. Barnard students noted that even on their small campus, smoking has not been eradicated.

"I guess I assumed that it [Barnard] was not smoke-free," Becky Davis, BC '11, said. She gestured to a small area several feet away from the Sulzberger lobby that is a frequent spot for smokers. "No one seems to enforce it, which is fine by me."
Suzanne Guttman, BC '12, said she was aware that the campus was smoke-free but also nodded towards the unofficially recognized smoking section on campus.

"I've seen the signs and I've seen the people walk past it smoking," she said. "Everyone knows people smoke there [outside Sulzberger lobby] and near Altschul."

"Maybe there's less smoking than there would be," she added. "I definitely don't think it's enforced."

But Ahmed said the CCSC vote against the proposal could be an opportunity for students to further shape suggestions for smoking regulations and allow for more input.

"I think it'll take time," he said. "It's not something that will be implemented in a week."

To view and voice feedback on the proposal, click here.
news@columbiaspectator.com
... 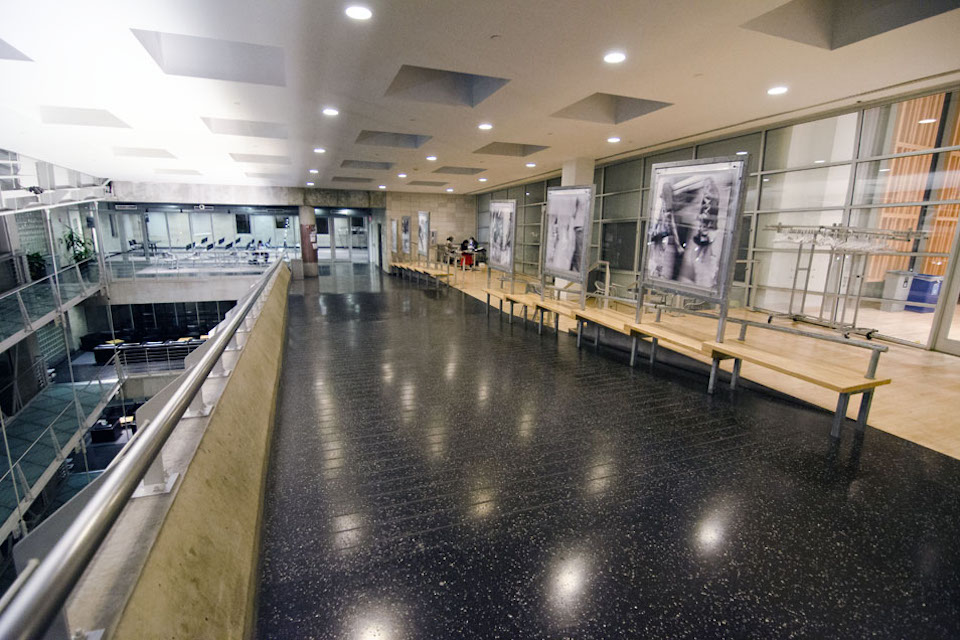 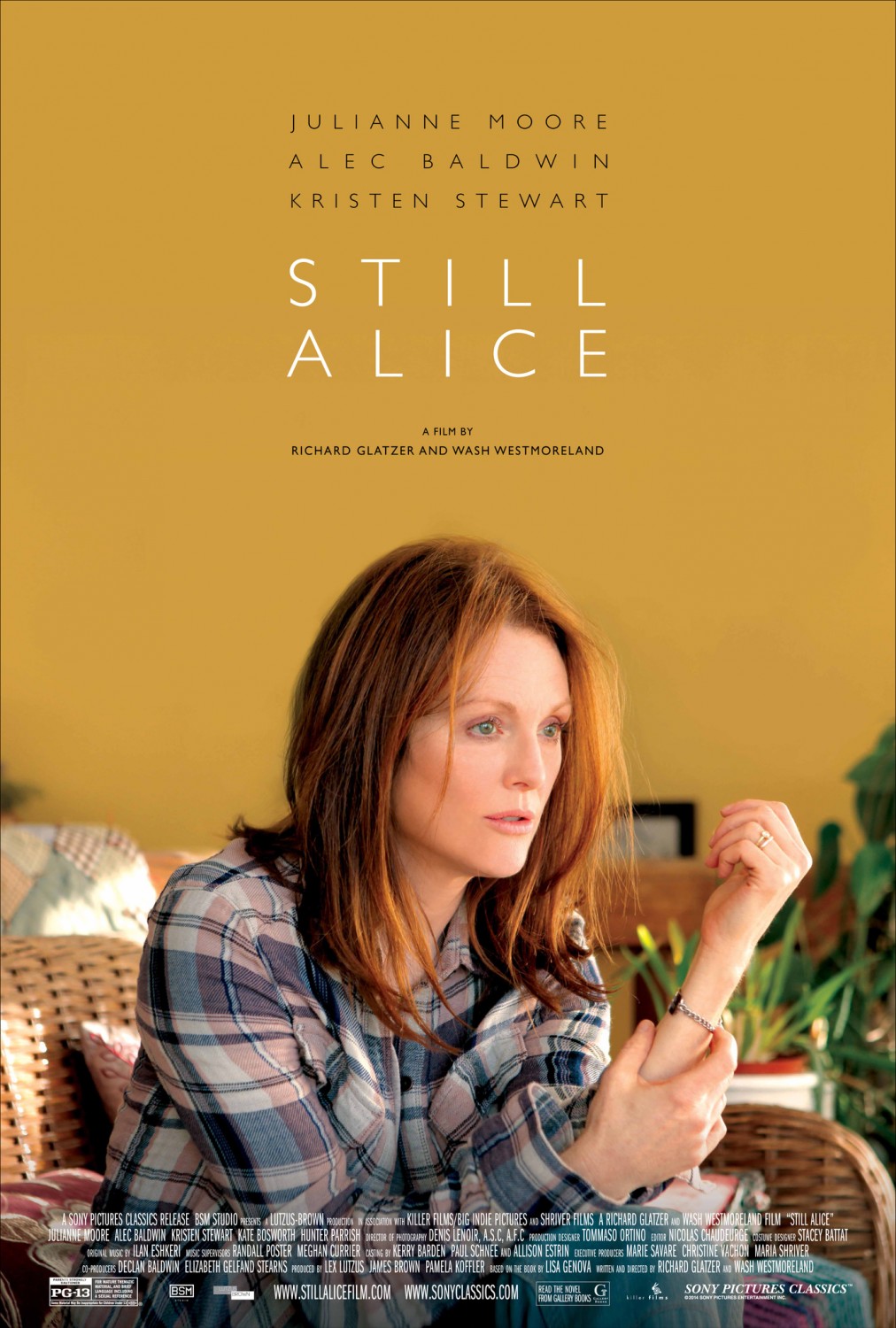 Still Alice': Stale adaptation of a heartfelt story
By Natalia Winkelman
Remember when Julianne Moore was spotted jogging on campus last spring? The shoot belonged to "Still Alice," released yesterday in NYC, in which Moore plays a Columbia linguistics professor who suffers from early-onset Alzheimer's disease.
...

'Still Alice': Stale adaptation of a heartfelt story
By Natalia Winkelman
Remember when Julianne Moore was spotted jogging on campus last spring? The shoot belonged to "Still Alice," released yesterday in NYC, in which Moore plays a Columbia linguistics professor who suffers from early-onset Alzheimer's disease.
...

'Still Alice': Stale adaptation of a heartfelt story
By Natalia Winkelman
Remember when Julianne Moore was spotted jogging on campus last spring? The shoot belonged to "Still Alice," released yesterday in NYC, in which Moore plays a Columbia linguistics professor who suffers from early-onset Alzheimer's disease.
... 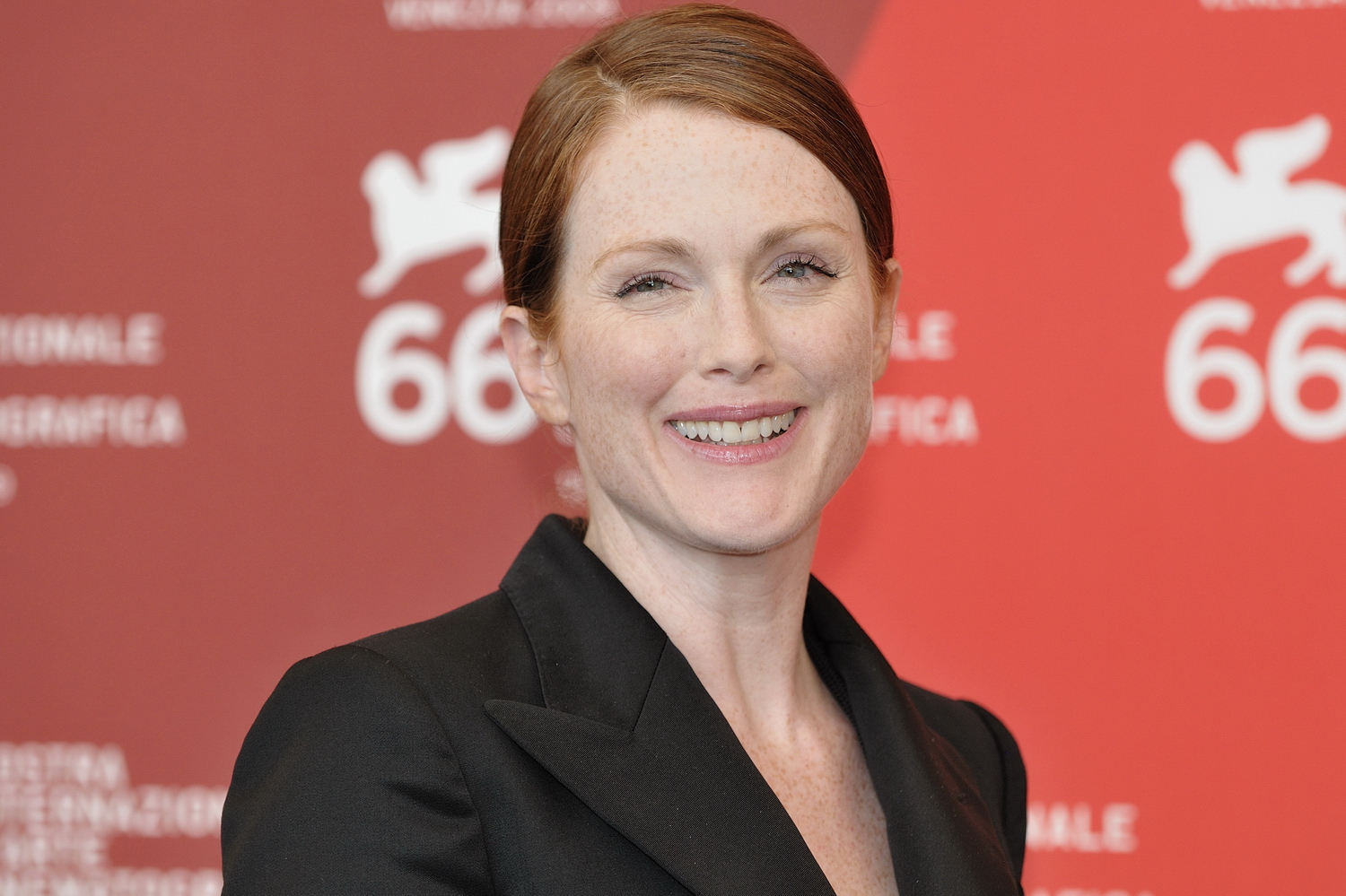 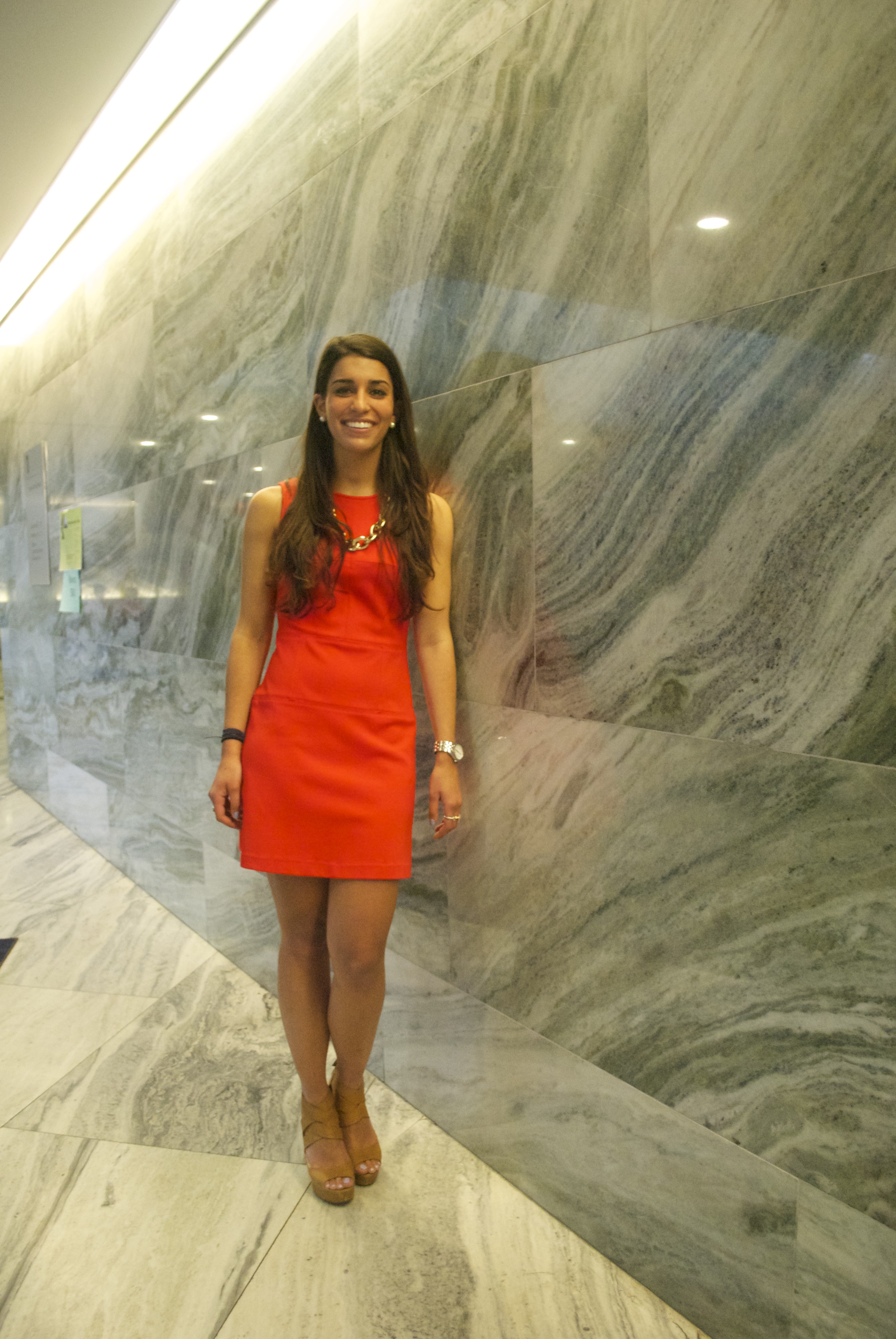 Barneys intern Alexa Mouta learns the ropes of online fashion marketing
By Katie Best-Richmond
At her internship, Alexa Mouta, BC '13, delves into an aspect of the fashion world that few think about when dreaming of magazines and clothing design. She works with the practical and business sides of fashion as a Barneys web marketing intern. Don't let this fool you -- suits aren't mandatory in this part of the industry. Alexa proves that all parts of the business require an eye for style with her classy and comfortable wardrobe, composed of pieces any fellow fashion intern would love to call their own. Katie Best-Richmond: How would you describe your personal style? Alexa Mouta: I would say I'm generally pretty casual. Even working at Barneys, I don't really wear heels that often. I like casual, but I definitely like adding in some fun pieces. I love wearing comfy materials and anything that is generally comfortable. KBR: What is your favorite piece to wear? AM: A sweater by Alexander Wang. I wear it literally everywhere. It's a black, oversized sweater and I'm obsessed with it. I wear it out. I wear it to the gym. I wear it everywhere. KBR: Where is your favorite place to shop?more AM: I love to shop at Barneys, but everything I was wearing in the striped outfit [see picture below] was J.Crew. I would be lying if I said I didn't wear a lot of J.Crew. My sister works there, so I buy a lot of clothes from their store, too. KBR: How did you become interested in the fashion industry? AM: I was first interested in print publishing, so I worked at a lot of magazines. However, I had never worked at a fashion magazine before, and I was a little intimidated at first. I feel like everyone is super scared of the fashion world, because it is such an insecure place for a lot of people. I got an internship at Harper's Bazaar and that opened my eyes to the opportunities in the fashion world, especially the corporate fashion world and working for specific brands.
...

Sex blog 2.0
By Elyssa Goldberg
Here we go corrupting the innocent again. A few students at Columbia, who choose to remain anonymous, have started a new blog in honor of spoofing our very own Go Ask Alice. Unsatisfied with the wholesome, sugar-coated answers Alice gives, the writers at Go Ask Malice answer the same questions in the voice of one of three personages: Timmy, the extremely sexually active 10-year-old, Jasmine, an angry African-American woman, and Your Father. Go Ask Malice abandons the tame and goes for the inflammatory. Site disclaimer and more info after the jump.more To deflect criticism:
... 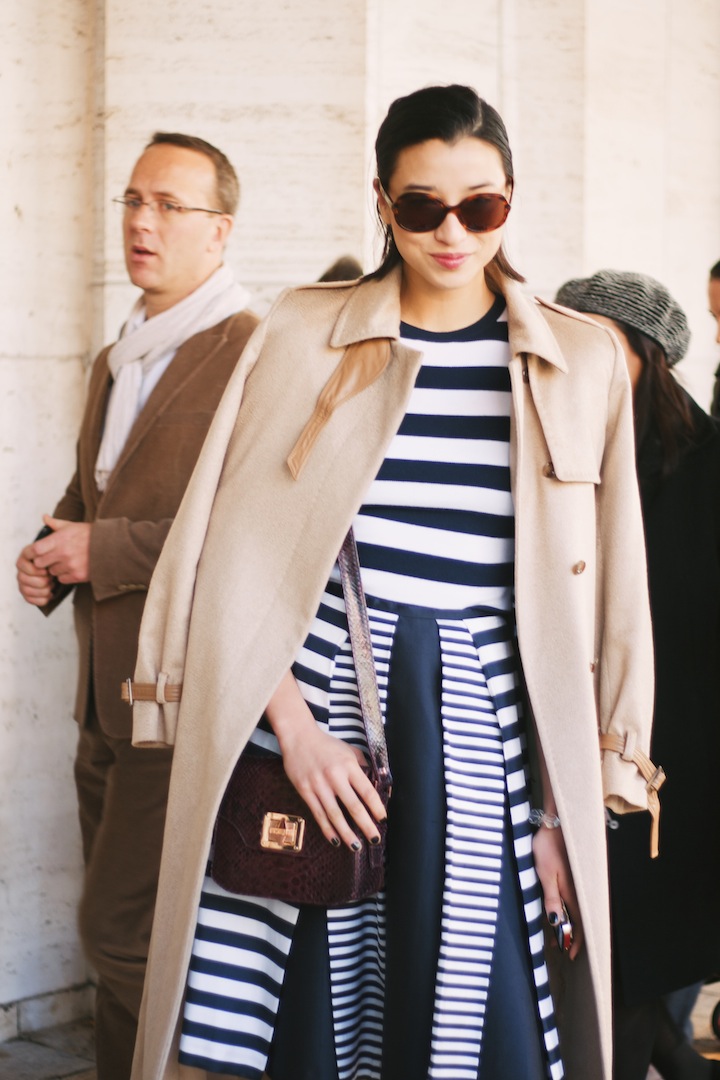 Dispatch from NYFW: Style in the city
By Alice Breidenbach, Hannah Choi, and Farhana Jamal
Not even Nemo could keep the fashion lovers away from Lincoln Center or dampen the excitement for Mercedes-Benz Fashion Week. Whether there to soak in the latest trends at a show or simply to admire the street style of their fellow Fashion Week attendees, fashionistas were determined to enjoy the biannual pinnacle of New York fashion and to look good while doing it.  Spectator photographers travelled to Lincoln Center to capture this ultimate showcase of the New York fashion scene and those that so avidly follow it. Big names, like fashionista Miroslava Duma, were in attendance at many of the shows:
...

Moving America Beyond Reagan's Grave
By Andrew Lyubarsky
In opposing the initial version of the much-discussed Wall Street bailout, Rep. Darrell Issa of California boldly declared that any intervention to stabilize the financial system would be akin to putting a "coffin on top of Ronald Reagan's coffin." To remedy a crisis that was generated by the systematic assault on state regulation starting with the Reagan administration, Republican dissenters to the bailout offered us a Polyanna-like faith that free markets will never cease to bring forth manna from the earth.
...
Back Next
ADVERTISEMENT
From The Blog