Hubbub: a revolution in ownership
By Jane Mok
Every college student is familiar with the struggles of having to set up a new home base every year. Most of us find ourselves at Target, on Amazon, or on Facebook Marketplace, scouring the shops every time we switch dorms for a suitable mini-fridge and decorative lamp to make our room comfortable and livable. But at some point, thanks to ridiculous storage prices and limited suitcase space, we find ourselves having to prematurely part ways with items that work just fine. This problem of temporary ownership is one that plagues all college campuses; on Columbia’s campus alone, more than 80,000 pounds of reusable items are abandoned every year. Across the country, over 200 million tons of these items fill landfills annually.
... 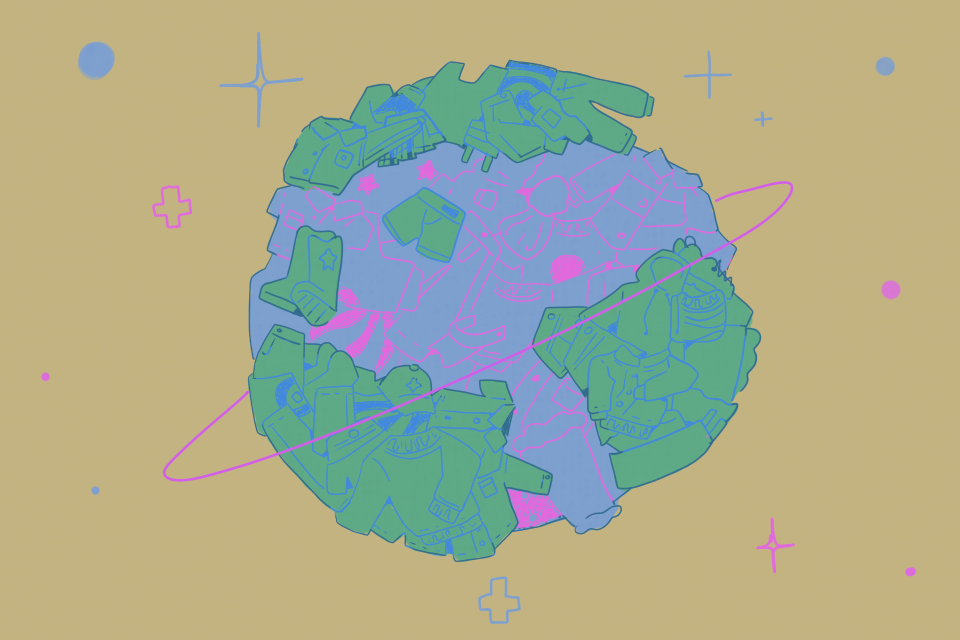 Green is the new black: Columbia community members push for sustainable fashion
By Fernanda Aguero
New York’s streets are a walking lookbook of diverse brands and clothing pieces, which symbolize the ever-changing nature of the fashion industry. Columbia, located in one of the world’s most fashion-forward cities, gives students the first look at the styles that will soon be worn around the globe.
... 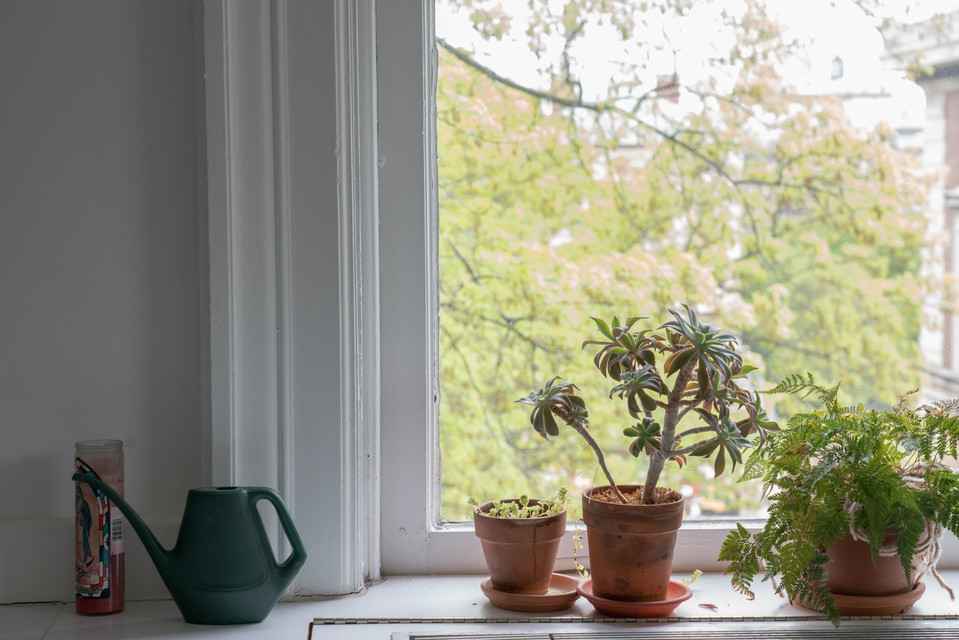 At The End Of Its Second Year, How Can The Sustainable Leaders Network Better Engage Undergraduates?
By Eve Washington
Take a look at that syllabus your teacher handed out at the start of this year. If your professor teaches at one of the 12 schools, departments, or locations that have been certified through the Sustainable Leaders Network’s Workplace Certification, that syllabus is most likely printed on 100 percent recycled paper. And that business card you got from a professor in the School of Nursing? It’s probably made up of at least 30 percent postconsumer waste content.
... 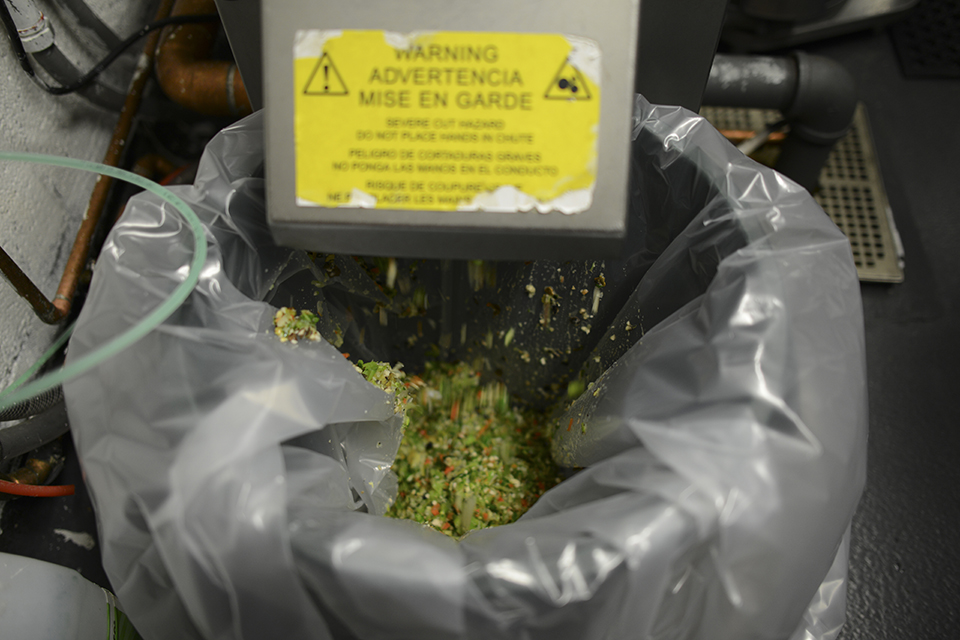 Columbia's growing composting efforts slowed by operational shortfalls
By Larson Holt
John Jay Dining Hall currently composts all of its leftover organic waste, as well as the paper napkins and compostable cups it uses. But all waste from Ferris Booth Commons—less than 0.1 miles away—ends up in the trash.
... 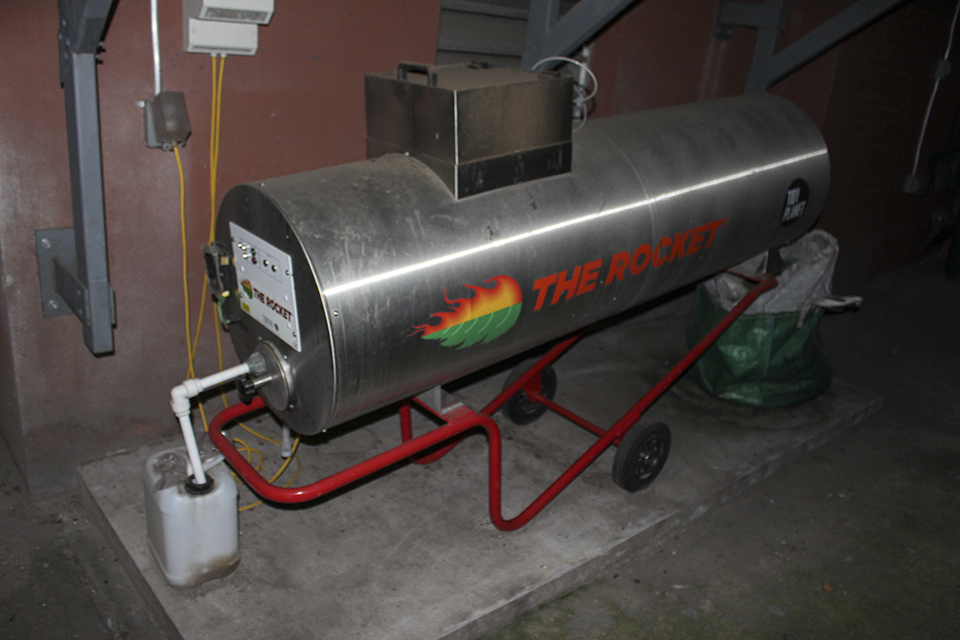 Optimism, but an uncertain future for composting at Columbia
By Sarah Linden
Environmentally conscious students gathered in the basement of Ruggles Hall on Thursday night for Compostapalooza, a party promoting the building's composter and raising awareness about composting on campus.
... 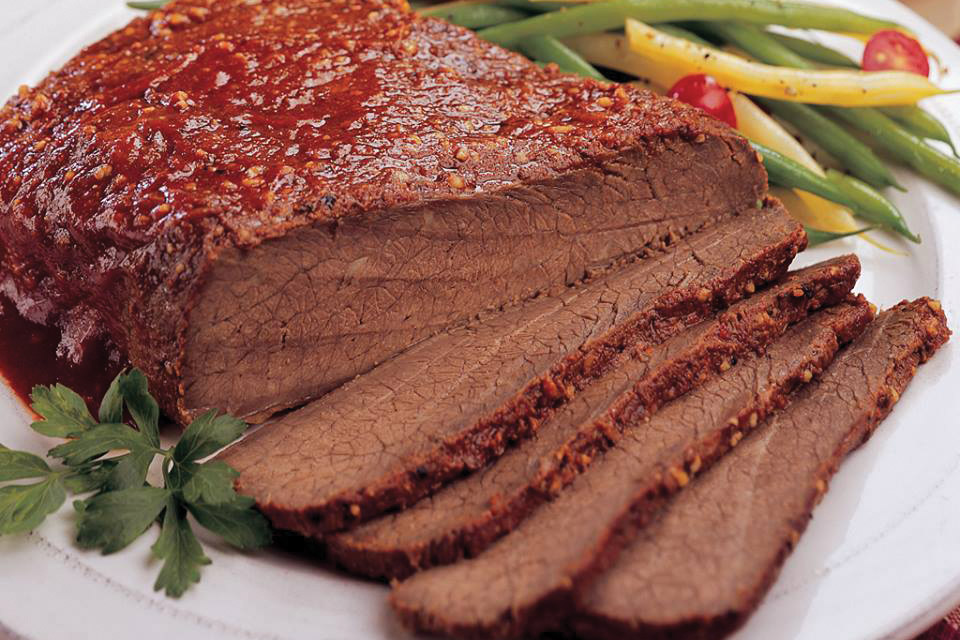 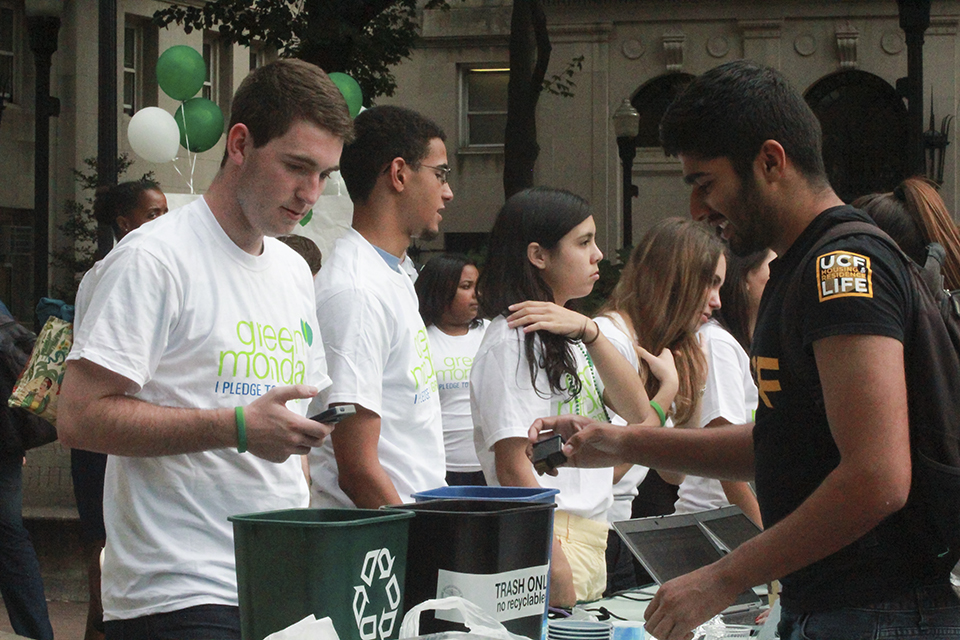 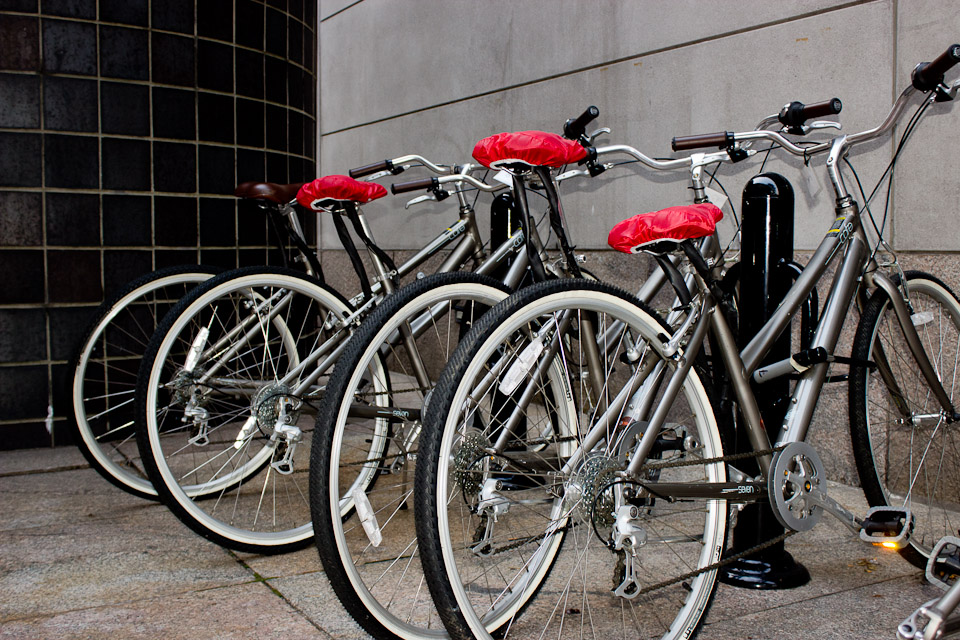 EcoReps bike-share expands for fall relaunch
By Eitan Neugut
Thanks to the EcoReps' extended bike-share pilot program, students may see more of their peers biking around campus this fall. 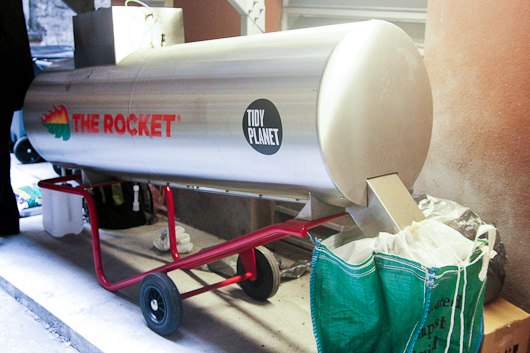 EcoReps composter expands to use for GreenBorough
By Abigail Golden
It's taken them longer than they would have liked, but the Columbia University EcoReps have begun to open up their Ruggles composter to the greater Columbia community.

The composter project has been a massive undertaking for the campus environmental group. EcoReps members kept use of the composter internal last semester as they learned how to operate and troubleshoot it. It was shut down for cleaning over the summer and remained closed partway into the semester to cultivate a new microbial community—the organisms that help decompose the compost.

But the composter—called the A500 Rocket and housed in the basement of the Ruggles dormitory—is back in business and collecting food from the special interest community GreenBorough once a week, in addition to the food scraps from John Jay Dining Hall it has been processing since April.

The project is a way for students to "take control of what they're doing with their waste versus just having someone else deal with it," said Adam Formica, CC '13, who headed the composting initiative last year. Last semester, the compost was delivered to Columbia's Food Sustainability Project, which runs a garden outside the Northwest Corner Building, a way for students to "reinvest" in their school, Formica said.

Still, opening the composter to the entire student body, beyond EcoReps and GreenBorough, will take more practice and patience. Formica said that student contributions would add another layer of complexity to an already complicated project.

Because at least one student trained to operate and monitor the expensive equipment is required to be present whenever food scraps are delivered, EcoReps leaders have reached out to GreenBorough and hope to follow suit with Ruggles residential programs soon. New volunteers will be trained by those current EcoReps members who know how to use the composter.

Another reason for the project's delay is the leadership's transition from Formica, who is graduating in the spring, to Marissa Savoie, CC '15.

"To sustain enthusiasm, you have to have leadership and someone who is willing to continue with something once it becomes unpopular, and so that's really what I was after in this project, in trying to build a core group of people to continue on," Formica said.

Savoie said that the transition process had gone smoothly.

"Something that EcoReps and a lot of clubs struggle with is having high turnover of members, but Adam and I communicate really well and are on the same page, and he's seen it from the very basic stages," she said.

It is unclear how much demand there will be from students for composting opportunities. Formica and Savoie cited GrowNYC's booth at the Columbia Greenmarket as an alternative place for students to drop off compost.

On a recent Sunday, most of the people who stopped by the composter were older residents of the neighborhood, but Formica and Savoie said they believe they'll be able to draw in students. Apart from the practical benefits of composting, measured by the overall quantity of organic waste diverted from landfills, Savoie said that the educational opportunity it offers is equally valuable.

"It's important because it allows people to understand the linear nature of the waste cycle that we usually have, and having a cyclical waste cycle—meaning that we know where our food comes from and where it ends up—that's really symbolic for people," Savoie said.

Savoie said that the size of the project isn't her primary concern. "As long as we're churning out compost and taking in vegetables, we're pretty happy with that," she said. "We know it's always going to be a fairly small scale, where we're at now, and I think we're comfortable with that." 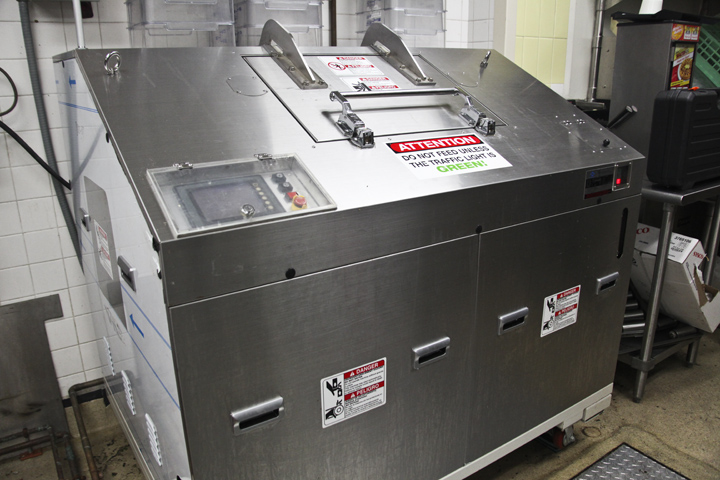 Rose Winer, CC '13 and the head of Columbia EcoReps' living green committee, said that the group is working with fraternities and sororities to develop the new Green Your Greek project.

"We're thinking right now it might be fun to have a competition between the frats, and the sororities in turn have requested that we come to their weekly meeting and do a brief educational program," Winer said.

CU EcoReps also has plans to organize a number of other initiatives to increase the general student body's awareness of recycling. In general, the group wants to "put the idea of recycling more in front of the students' eyes ... to make it more convenient for them to recycle, and to make it more part of their daily routine," Winer said.

One year ago, Barnard launched its Sustainable Initiatives Consulting Board to take over Barnard EcoReps' role as a liaison between students and the administration. Since then, it has begun a zero-waste initiative, designed by members of the committee.

The project also includes an effort to find a way for students to recycle plastic bags. As a first step, the SICB is planning an Earth Day event this year where students can exchange plastic bags for a reusable tote.

"We're looking into long-term options and also shorter-term options," Deborah Robertson, BC '13 and chair of the SICB, said.

But these recycling efforts are only the latest of examples of Barnard's efforts to create a greener campus.

Barnard employs a private contractor called Action Carting that has facilities to process all seven types of recyclable plastic, and it provides readily accessible bins for unusual items—books, batteries, e-waste, and lightbulbs—in the Quad, the 600s, and Plimpton Hall.

When Barnard started using a private contractor for trash pickup in the mid-2000s, recycling wasn't the determining factor in the decision. The school switched to Action Carting because the municipal system was unpredictable and its pickups were often late, leading to a buildup of trash on Claremont Avenue, according to Julio Vazquez, director of Barnard Facilities.

"You have residents who live on Claremont Avenue, you have students, you have young children who are walking up and down the street in front of those mounds of garbage that have been put out," Vazquez said. "You can imagine how it is during the warm weather to have the trash sitting out there, waiting to picked up, with Sanitation coming whenever it is they come."

But Vazquez said that Action Carting's recycling service was an appealing bonus.

"That's one of the prime benefits," Vazquez said. "It's kind of one-stop shopping for garbage pickup."

"It's not like anything else in New York," Caroline Moore, BC '15 and a member of Barnard EcoReps, said of Action Carting's services. "It's everything, basically. That's the best I've seen."

Zoe Schein, BC '13, describes herself as an obsessive recycler, and said that she is pleased with the scope of Barnard's facilities.

"I'm from Vermont, and it's a very eco-minded community, so it's definitely something I prioritize," she said. "It's really nice because they have [e-waste] stations set up in all our dorms, so that you don't even have to leave your building to recycle the right way."

On both sides of Broadway, composting has also become an important component of students' sustainability efforts.

Barnard operates both a biodigester, which breaks down and compresses the food waste from Hewitt Dining Hall, and a compost tumbler, where students can contribute food scraps from their dorms.
However, the tumbler's location—sandwiched between Lehman Library and Altschul Hall—means that many students aren't aware of its existence.

Isabel Nelson, BC '16, composted regularly at home in Olympia, Wash., but didn't find out about Barnard's compost tumbler until after it had closed for the winter.

"I think it's a great idea, and it definitely could be publicized a little more," she said.

More recently, the Barnard composters have been joined by a Columbia counterpart, the A500 Rocket, which was installed in Ruggles Hall last April.

The Rocket uses more sophisticated technology and can churn out more compost than Barnard's tumbler, but access is still limited to Columbia EcoReps and GreenBorough, the sustainable living special interest community.

"I've always been very impressed by Barnard's system," Schein said. "I give tours of campus, and I point out to people that, clearly, we have these values, we always have the recycling next to the trash. And I think parents and visitors are very impressed by that."