Columbia Athletics addresses athlete activism in first webinar on social justice
By Bernard Wang
Colin Kaepernick famously took a knee against police brutality in 2016. The #MeToo movement reached the sports world in 2018 and exposed repulsive misconduct in many spheres. After the murders of George Floyd and Breonna Taylor by police in 2020, strikes and civic engagement from almost all corners of the sports world, especially the WNBA, swept the nation. In short, modern activism in sports is at an unprecedented level, professor Frank Guridy said at the start of Monday’s Athlete Activism webinar.
... 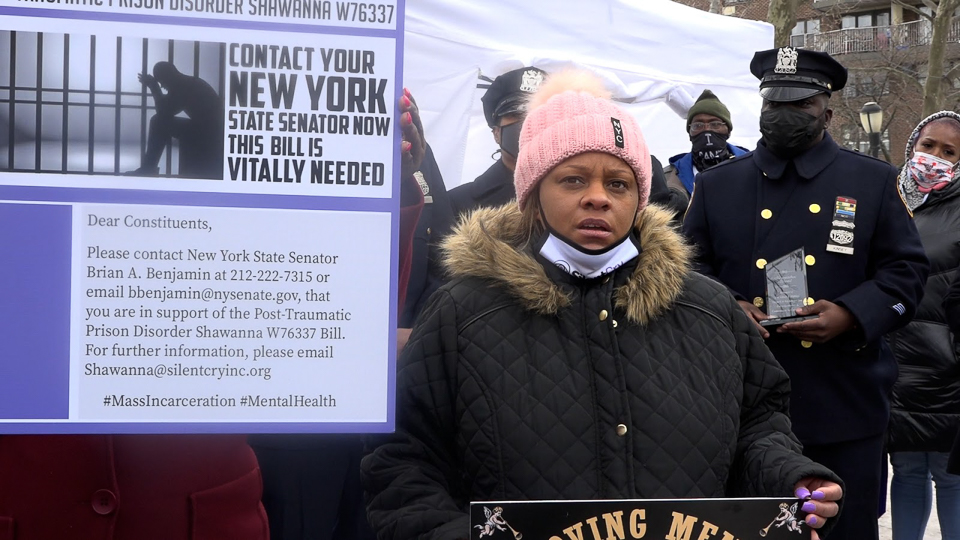 You perpetuate systemic oppression through your elite standards and unrealistic expectations
By Pastor Isaac Scott
Long-standing institutions that seek to move toward social correctness in 2021 are often proud to declare that those who are closest to the issue are closest to the solution and should be driving the change. While true, in its current application, this proximity to justice and advocacy rhetoric for the oppressed manifests only in mere concept. It is nothing more than rubber-stamped language rearticulated from organization to organization that expresses understanding and empathy. The reality is that well-known organizations continue to profit from prioritized funding, accessible social resources, and supportive networks that would be more beneficial to Black and Indigenous people in communities like Harlem. These benefits should be reallocated to smaller, nontraditional community-based projects and organizations that are birthed right out of the neighborhoods they serve.
... 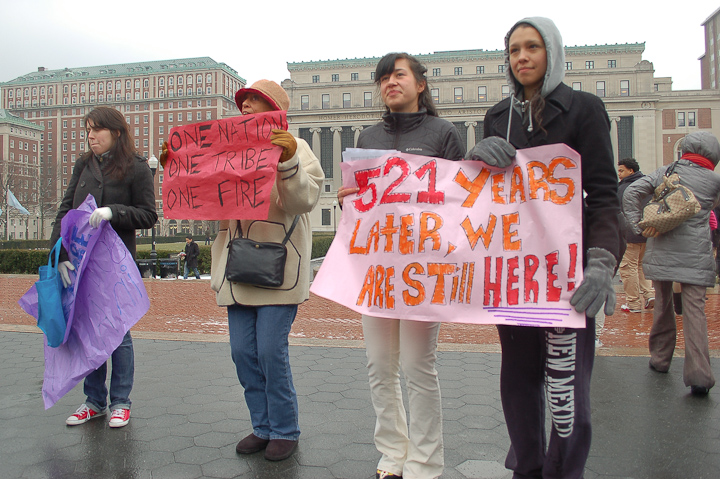 Students, faculty from Columbia, Yale protest Native land legislation
By Tracey Wang
Since the Canadian government passed a bill last November that changes land management on indigenous peoples' reserves, thousands of Native Americans and opponents of the bill have protested it, calling it abusive. And now, Columbia students are joining the movement.

As part of the Global Day of Action for Idle No More, a grassroots movement in response to the legislation, students and faculty members from both Columbia and Yale organized a flash mob and a teach-in on Monday.

Student organizers from Columbia coordinated with Native American student leaders from Yale to schedule a teach-in, which featured a Google video chat session with faculty from both schools. The event drew about 60 attendees.

Tristin Moone, SEAS '14 and one of the program organizers, said she supports Idle No More because "a lot of the laws they're talking about have happened already to us here, so that's why it hits close to home—that is why we support them."

At the teach-in, Theodore Van Alst, assistant dean of Yale College and director of Yale's Native American Cultural Center, said that Americans constantly forget their own country's history when it comes to Native Americans.

He recounted going to the inauguration in Washington, D.C. last week with students from Yale and listening to Inaugural Poet Richard Blanco's poem "One Day."

"The poem talked about recent immigrants and those who fought in the American Revolution, thus narrowing America to a very small window of about 200 years," he said. "I never heard about us—this eraser happens a lot."

Van Alst added that he sees the Idle No More movement as the chance for the "red nation to rise."

Audra Simpson, an anthropology professor at Columbia, discussed the importance of the movement as part of a larger need to address the indigenous population here in the United States.

"This day is evidence of the movement continuing," she said. "This movement is significant because of its manifesting critique of settler colonialism, of settler governance."

She added that the movement urges people to honor and uphold indigenous sovereignty and to stop governments and corporations from "treating the land like a dead body to be extracted from."

Margaret Moss, an associate professor at Yale's School of Nursing, spoke during the video conference about the health implications of policies from Canada and the U.S. that directly impact the indigenous community.

"A male born on a reservation has an average life span of 40 years, the shortest of any group in America and Canada," she said. "That's largely a result of the policies that govern indigenous people."

Earlier in the day, battling freezing temperatures and rain, about 20 students gathered on College Walk and held signs that had slogans expressing support for indigenous rights.

Participants performed a round dance while Julian NoiseCat, CC '15 and treasurer of the Native American Council, sang and played the hand drum.

Doug Parsons, a Brooklyn resident, said that the teach-in was informative and educational.

"As a non-Native, I'm acting as an ally," he said. "My goal is just continuing on and supporting the movement as an outsider being educated."

Mari Hulbutta, CC '14 and a member of the NAC, said that she was proud to be a part of the movement that has its origins in Canada.

James Sinclair, assistant professor in the department of Native Studies at the University of Manitoba, said that while movements like Idle No More have come and gone in the past, he sees this as a pivotal moment in Native history.

"This history will change now," he said. "We have experienced this change in beautiful ways all around the world."

Peace in the Middle East
By Jonah Liben
Edward Said, the late Columbia professor and advocate of Palestinian rights, gave a talk in 1991 South Africa about the state of Western academia, declaring that "the world we live in is made up of numerous identities interacting, sometimes harmoniously, sometimes antithetically. Not to deal with that whole ... is not to have academic freedom." In college, it is imperative that students leave their comfort zones and cultural milieus in favor of new and challenging ideals and discourses. Over the past several weeks, I have had the great opportunity to see several excellent events covering the Middle East and spanning Columbia's and Barnard's campuses. Because I come from the ranks of Hillel's Israel programming, I am normally involved in Middle East programming within the Jewish community. However, some of the recent events I attended were not run by Hillel but by other groups around campus. For example, in early February, I attended a talk called "My Jerusalem: Tense Politics of the Everyday" by the esteemed Israeli professor Dr. Nadera Shalhoub-Kevorkian. Dr. Shalhoub-Kevorkian discussed, among other things, the traumatic experiences of children who grow up under the constant threat of war. These children have to deal with the daily hardships of passing through checkpoints and, in some cases, security fences and walls that separate the West Bank from Israel. Last spring, while abroad in Israel, I had the opportunity to meet several individuals and families in the three Bethlehem, West Bank refugee camps, as well as villagers outside of Bethlehem whose homes are right next to a security wall. Every single Bethlehemite that I talked to had very legitimate complaints about the security wall. Beyond any doubt, it often makes life miserable for the average Palestinian. I was not there to speak my narrative and try to explain why many Israelis, after years of terror and homicide bombers, insist that a protective barrier is necessary. I was there to listen. Similarly, when Dr. Shalhoub-Kevorkian relayed stories from her various research interviews and discussed sensitive issues, I listened. And then I asked, "How are you working to make things better?" Her response was not overly optimistic, but it was truthful and, just as important, it was constructive. She said that she works with non-governmental organizations and research institutes in Israel to put her issues on the map. As a legal scholar, she fights the Israeli courts, using the system's legal terminology to prove her points. Finally, she speaks out and spreads her knowledge through lectures. Never did she call for a boycott or divestment as other audience members did, perhaps because she knew that doing so would put her and the other million-and-a-half Palestinian-Israeli citizens out of jobs. Although I did not agree with everything said in the room during the talk, I learned a lot about an important issue in the Middle East today. As a devoted 21 century Zionist, I apply Professor Said's quote to Middle Eastern politics. In order to step out of my comfort zone and really learn what is out there, I read Khalidi next to Jabotinsky. Al-Bayati's poetry rests beside Amichai's, and Nusseibeh's memoirs are across from Ben-Gurion's. But more than that, there is a constant attempt to provide the community in Hillel—with all of its different internal goals, agendas, political leanings, and missions—with meaningful programming that helps everybody think outside the box. This is why I write to you now. For the week of March 1-7, the four Israel groups in Hillel, namely the Israel Committee, LionPAC, Just Peace, and Garin Lavi, have joined together to present events that we feel are in the interest of both Israeli and Palestinian peace, hence the name for our initiative, Peace Week for Israelis and Palestinians. Much of our programming directly relates to issues surrounding both Palestinians and Israelis. Tonight, one of our groups is sponsoring an event that highlights the myriad grass roots movements in Israel that work to push the Israeli government toward peace with its Palestinian neighbors. Many of the groups whose information will be spread are either based in or work with Palestinians in Gaza, the West Bank, and Israel. These include B'Tselem, Israeli Committee Against House Demolitions, the Jenin Freedom Theatre, and OneVoice. Thursday's program, "Soldiers Speak Out," will feature former Israeli soldiers giving their personal testimonies on how they dealt with moral and ethical issues while serving in Gaza and the West Bank. Our groups are attempting to engage with anyone and everyone interested in peace in the way we believe is most appropriate: through events that encourage constructive dialogue and not hatred and slander. This is the mission of our week, and we hope in earnest to see you there. The author is a student in the School of General Studies and a junior in the Jewish Theological Seminary. He is majoring in MEALAC and modern Jewish studies. He is the Hillel Israel Coordinator and a representative on the Student Governing Board.
...
ADVERTISEMENT
From The Blog