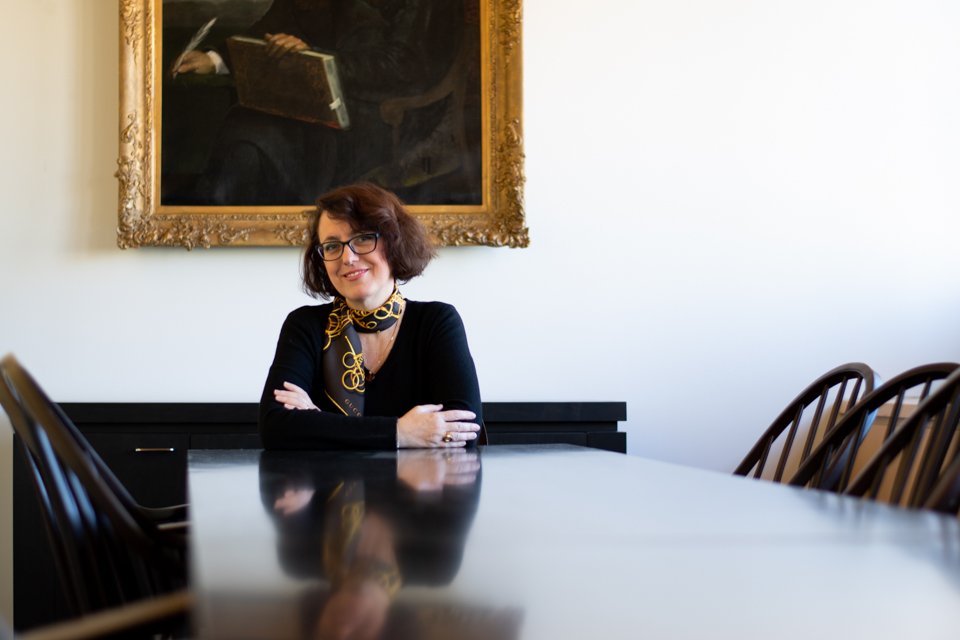 Professor Barbara Faedda meets the demand for more fashion on campus
By Esterah Brown
As she sits across the table from a portrait of Lorenzo Da Ponte, the first professor of Italian at Columbia University, Barbara Faedda prepares to change the direction of the Italian department with her new seminar, Introduction to Fashion Studies.
... 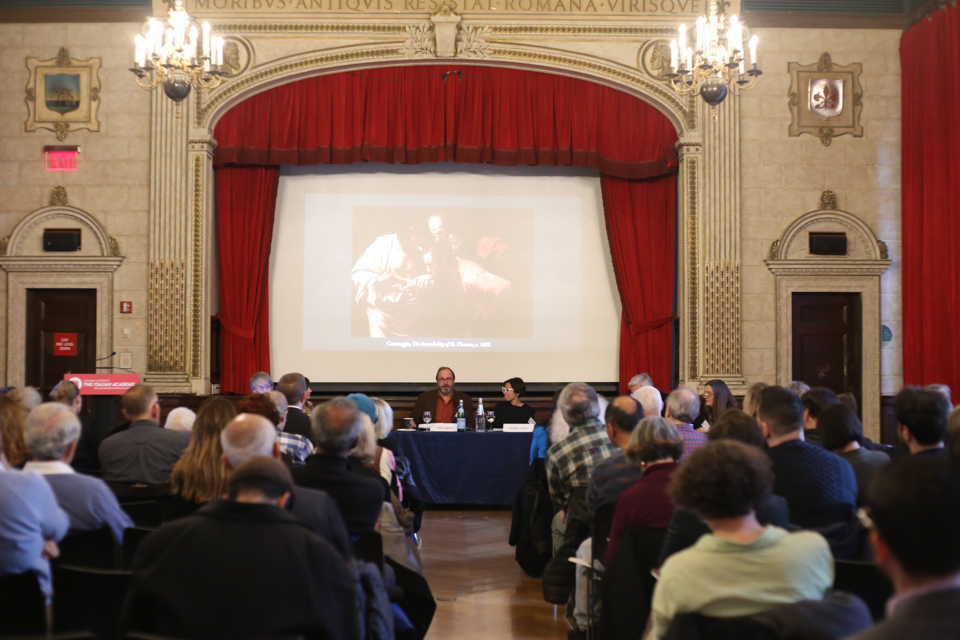 Italian Academy roundtable questions artistic and historical truth after Council of Trent
By Olivia Doyle
Italian artist Caravaggio’s painting “The Incredulity of St. Thomas” features his characteristic use of chiaroscuro, or the dramatic use of light and shadow. But what is most remarkable about the image is not only the artist’s rendering of the scene but also the subject matter itself: St. Thomas leans towards Christ, poking at his flesh in disbelief of Christ’s resurrection.
... 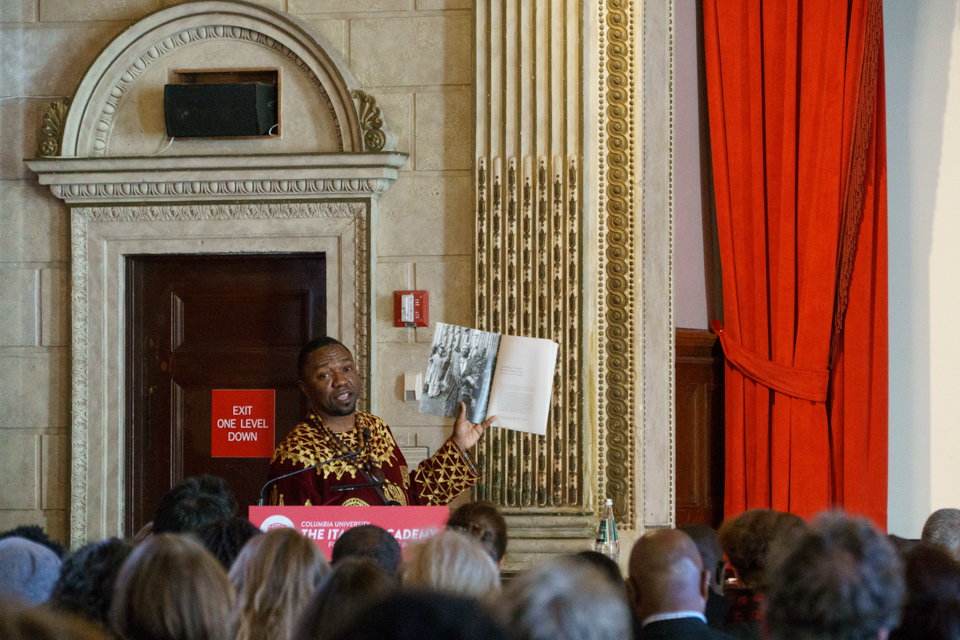 Authors of “The Restitution of African Cultural Heritage” report discuss the return of African objects to their native countries at symposium
By Olivia Doyle
The ornate ceiling and dramatic red curtains framed the auditorium screen that displayed the return of the Obelisk of Axum to Ethiopia. Museum of Modern Art curator Ugochukwu-Smooth Nzewi spoke of the importance of the obelisk’s physical return, as well as its cultural implications, while the audience watched the airplane to Ethiopia take off onscreen.
... 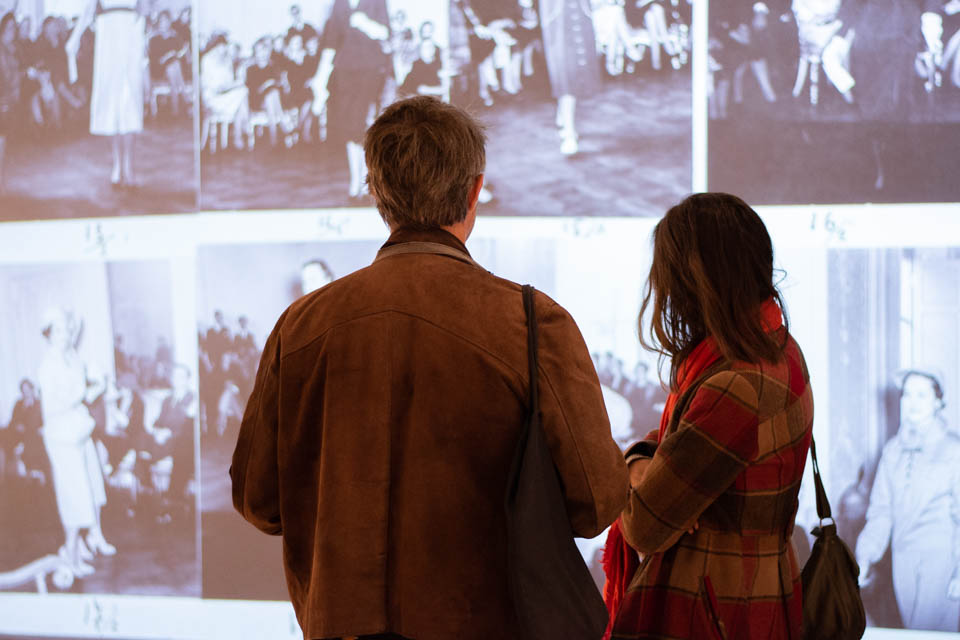 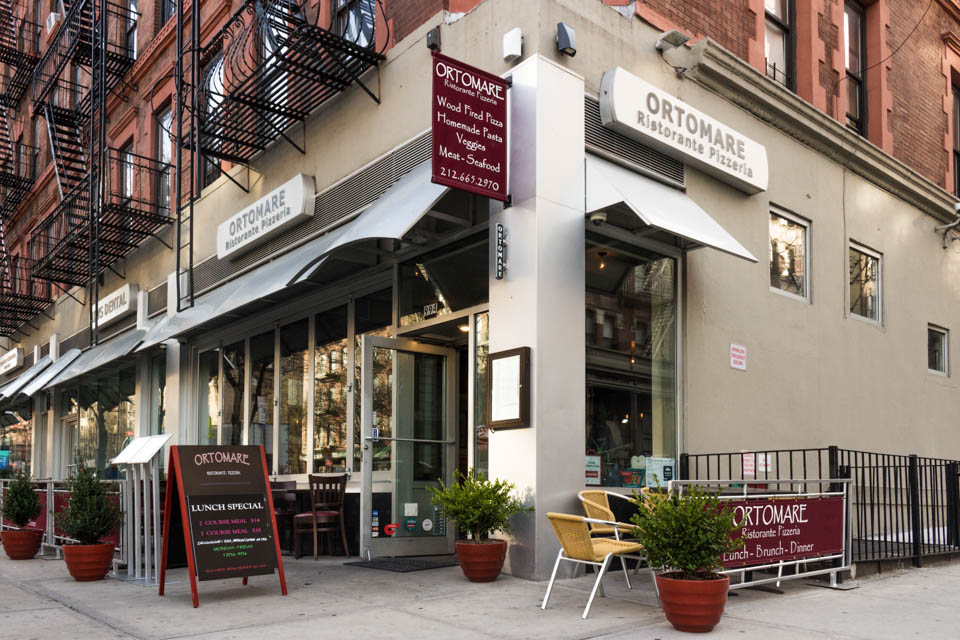 A touch of Rome at Columbia, Restaurant Ortomare opens on Columbus Avenue
By Kathleen Drake
On the corner of Columbus and 109th Street, new restaurant Ortomare is bringing authentic Italian cuisine across the sea to the piccolo metropolis of Morningside Heights. “Ortomare” comes from the English translation of the Italian phrase, “orto e mare,” meaning “the vegetable garden and the sea.”
... 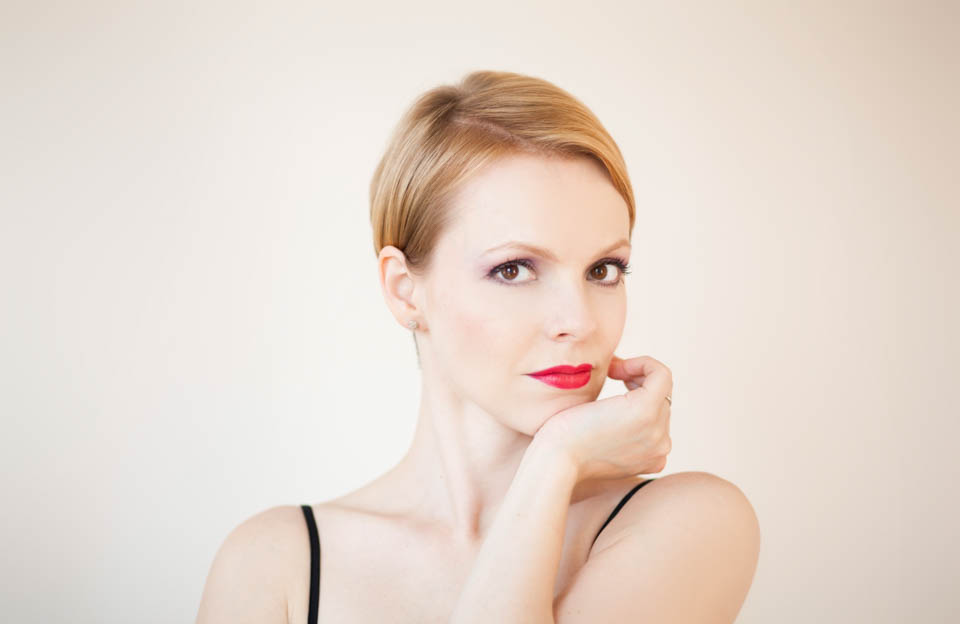 Rarely does a single piano recital take the audience on a trip through four centuries of Western music, starting from Baroque Italy, to Chopin’s Paris, and finally to Paderewski's Californian vineyards.

For Baczewska, her recital was an opportunity to educate her audience—many of whom were students in her Music Humanities class—in an effort to bolster their waning interest in classical music.

“I want the audience to feel educated, but more importantly, included,” she said.

The program opened with works of Italian origin from different eras, beginning with a Clementi sonata, followed by two Encores by Berio, a short canzonetta by Monteverdi, and concluding with six Scarlatti sonatas. After the intermission she played “Images,” an impressionistic masterpiece by Debussy, followed by a nocturne and a scherzo by the great Romantic composer Chopin.

Baczewska explained that Italian-native Scarlatti was influenced by Spanish flamenco while Clementi was influenced by Schubert, demonstrating how a piece of music may contain allusions to different styles, eras, and cultures while still remaining a unique and cohesive work.

The pianist also elaborated upon her own personal connections to the pieces in her program. Like Chopin, Baczewska is of Polish descent and is an expatriate living abroad. She was brought up listening to and playing Chopin’s distinctly Polish works.

Baczewska told Spectator on Tuesday that this historical aspect of her program is especially relevant now, citing increasingly visible protests in Poland as a result of the wave of radical nationalism spreading across Europe.

“November 11 was Poland’s Independence Day, so it made me think about the future of my country,” she said. “This certainly left me worried and hoping that Poland will see its 100th birthday.”

This reflection came through in the encore of her recital, a dreamlike nocturne by the former Polish statesman and composer Paderewski. As Chopin wished that he could return to an independent Polish state, Baczewska hopes that her country will retain its hard-fought autonomy. 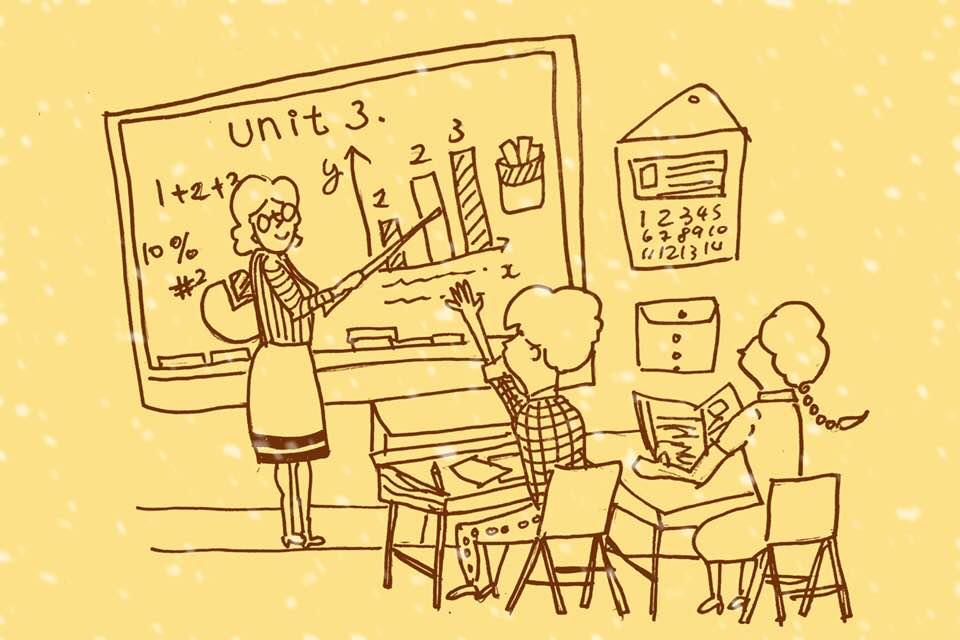 Don’t ‘join the team’
By Meghan Brophy
For a lot of Barnard and Columbia students, finding a “good” job that also betters the world can sound quite difficult. Over the past few months, many of us have received several LinkedIn messages with invitations to panels to learn about “join[ing] the team” at Success Academy. While the prospect of networking and partaking in the project of “redefining what’s possible in public education” may sound progressive, the reality of Success Academy is far from it.
... 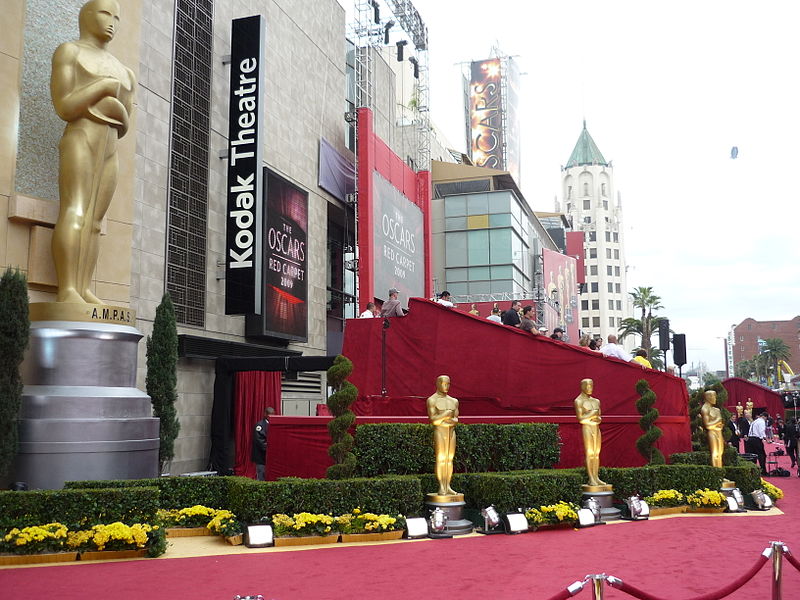 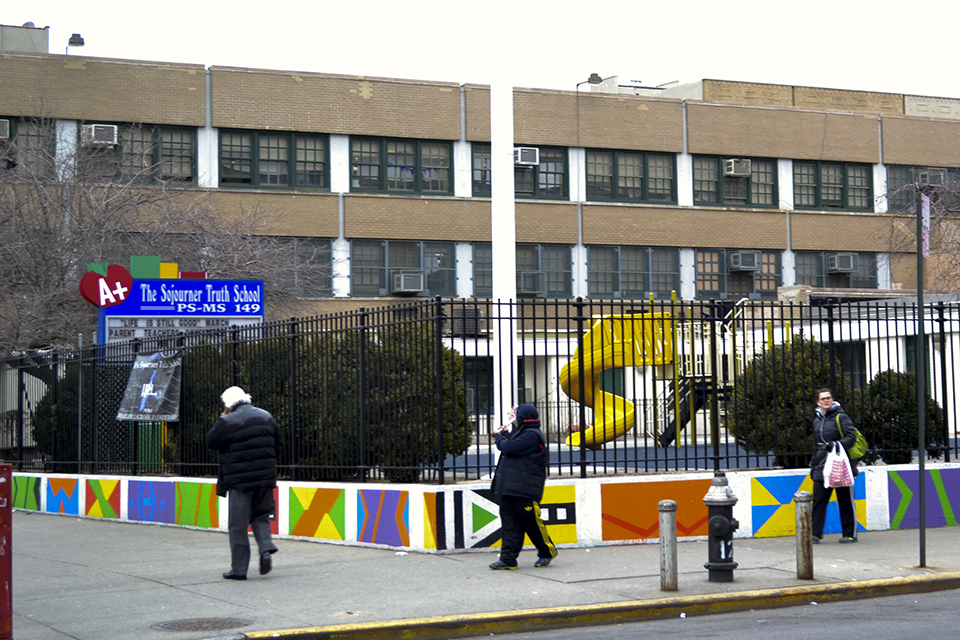 For parents on both sides of Harlem Central co-location, struggles lie beyond the lawsuit
By Deborah Secular
At the heart of Mayor Bill de Blasio's charter school controversy is Harlem Central, a Success Academy charter middle school currently located in a public-school building on 113th Street and Frederick Douglass Boulevard.
... 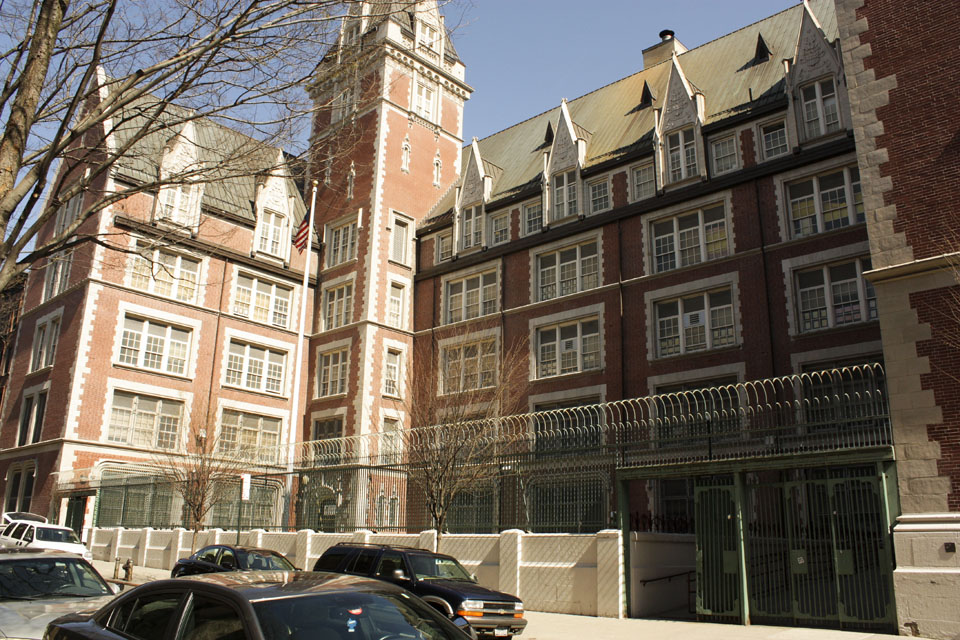 New District 3 Success Academy charter school approved despite opposition
By Daniel Bergerson
One of the 17 new charter schools in New York City approved by the state on Wednesday will be a Success Academy in the school district that encompasses the Upper West Side and Harlem.
...
Next
ADVERTISEMENT
From The Blog