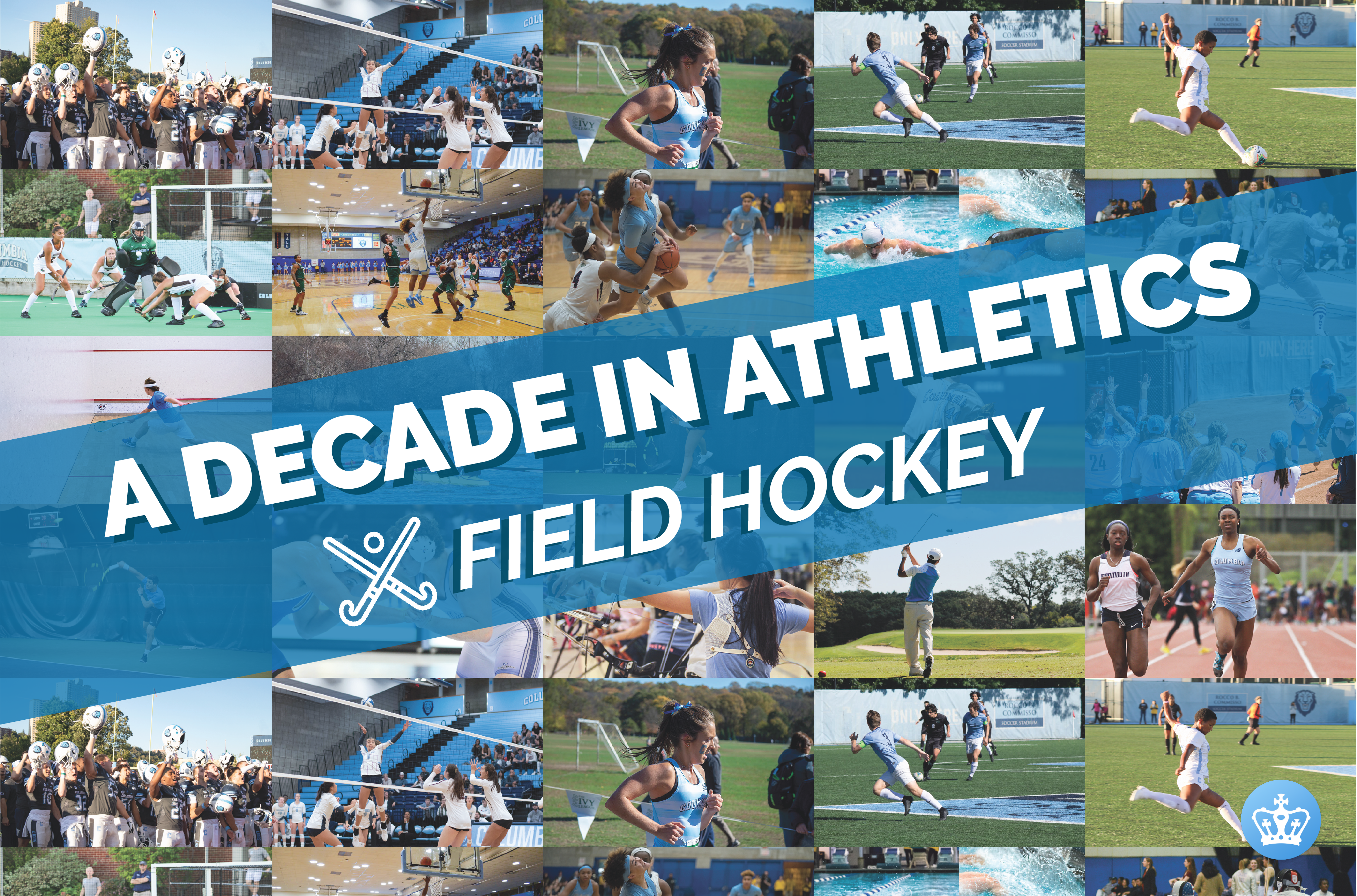 Decade in review: Field hockey’s journey from its highest peak to a stagnant middle-tier
By Miles Schachner
For Columbia field hockey, the 2010s were driven by a hunger for the team’s first taste of success. Going into the decade, the program was entering its 15th year, but had only ever carried four winning seasons and 24 wins in Ivy League play out of 91 games. To start off the decade, the Light Blue went 10-7, 9-8, and 9-8, rattling off three consecutive winning seasons. However, in 2013, the team stumbled, earning a 6-11 record with just two Ivy League victories.
... 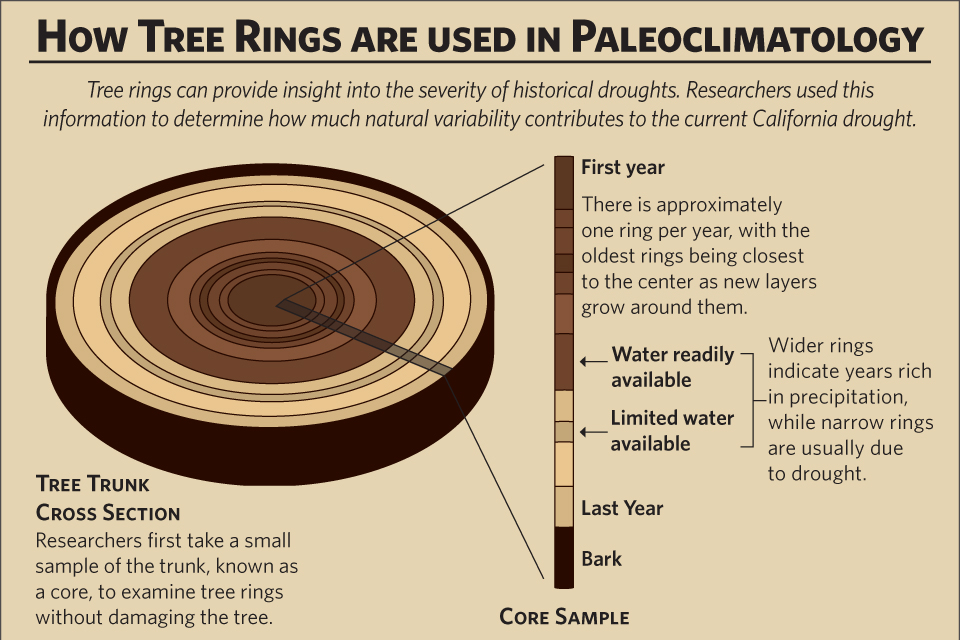 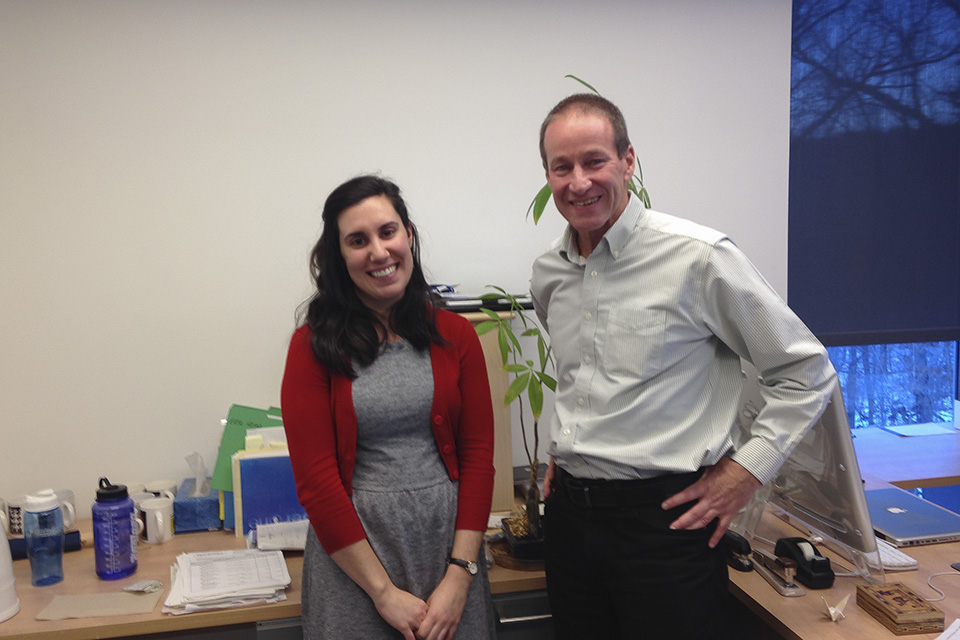 New data may change understanding of ocean's nutrient cycle, researchers say
By Dan Garisto
Core samples of sediment from the bottom of the Pacific Ocean have provided evidence that could change scientists' understanding of how the oceans' nutrient systems work.
... 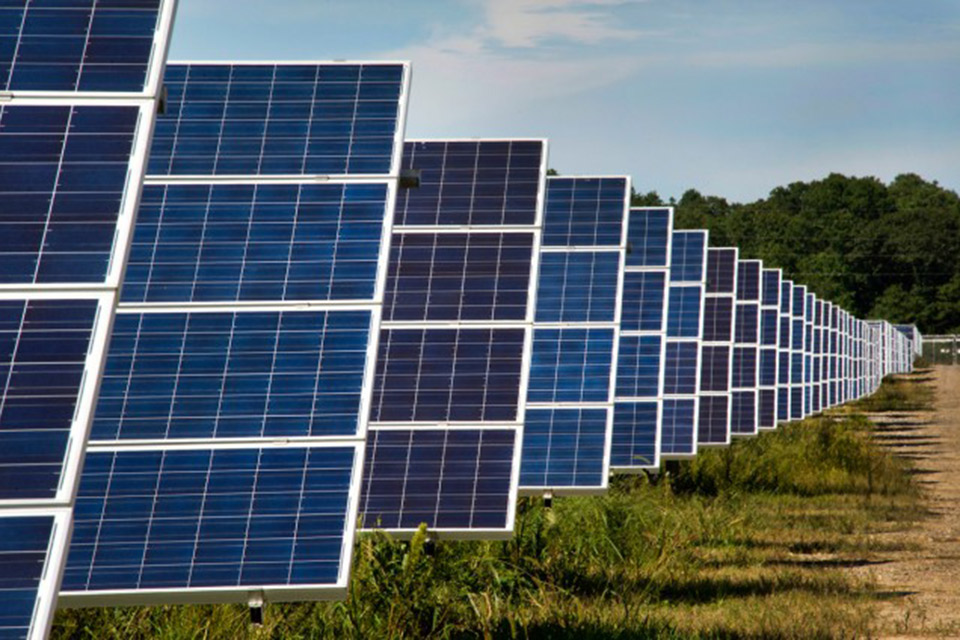 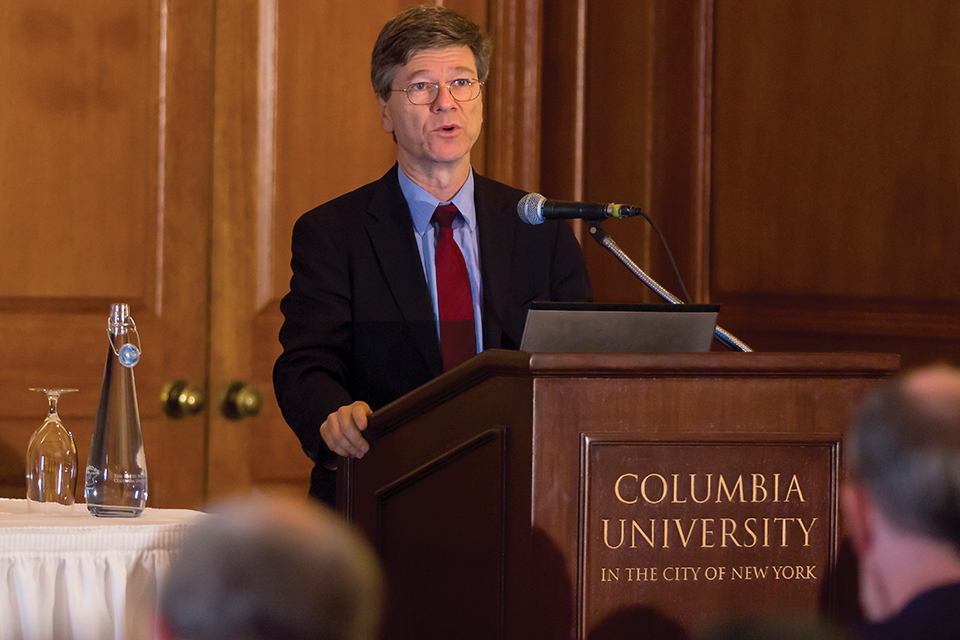 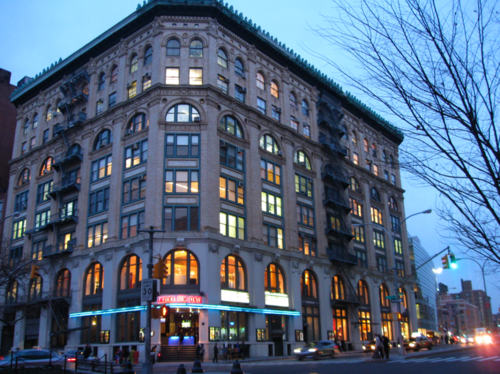 Seismograms from East Harlem building collapse
By Christian Zhang
At around 9:30 a.m. this morning, two buildings on 116th Street and Park Avenue collapsed after a gas leak caused an explosion in the building. According to the New York Times, the collapse killed two people, and 12 more are missing. As of 3 p.m., the fire is still burning, and the block remains saturated with emergency crews. The collapse was picked up by earthquake seismometers throughout the region, including Columbia's Lamont-Doherty Earth Observatory, near Nyack, New York. According to an email from research professor Won-Young Kim—who heads the Lamond-Doherty Cooperative Seismographic Network, which monitors earthquakes in the Northeastern U.S.—a station in Central Park picked up a weak seismic signal at 9:30:44 a.m., followed by a stronger one a millisecond later at 9:30:45 a.m. A station at Fordham University in the Bronx also picked up a signal at 9:30:47 a.m. Based on these times, the network estimates the collapse occurred at 9:30:42 (±1.5 seconds). This is what the collapse looked like (CPNY is the Central Park station, FOR is the Fordham station): more
... 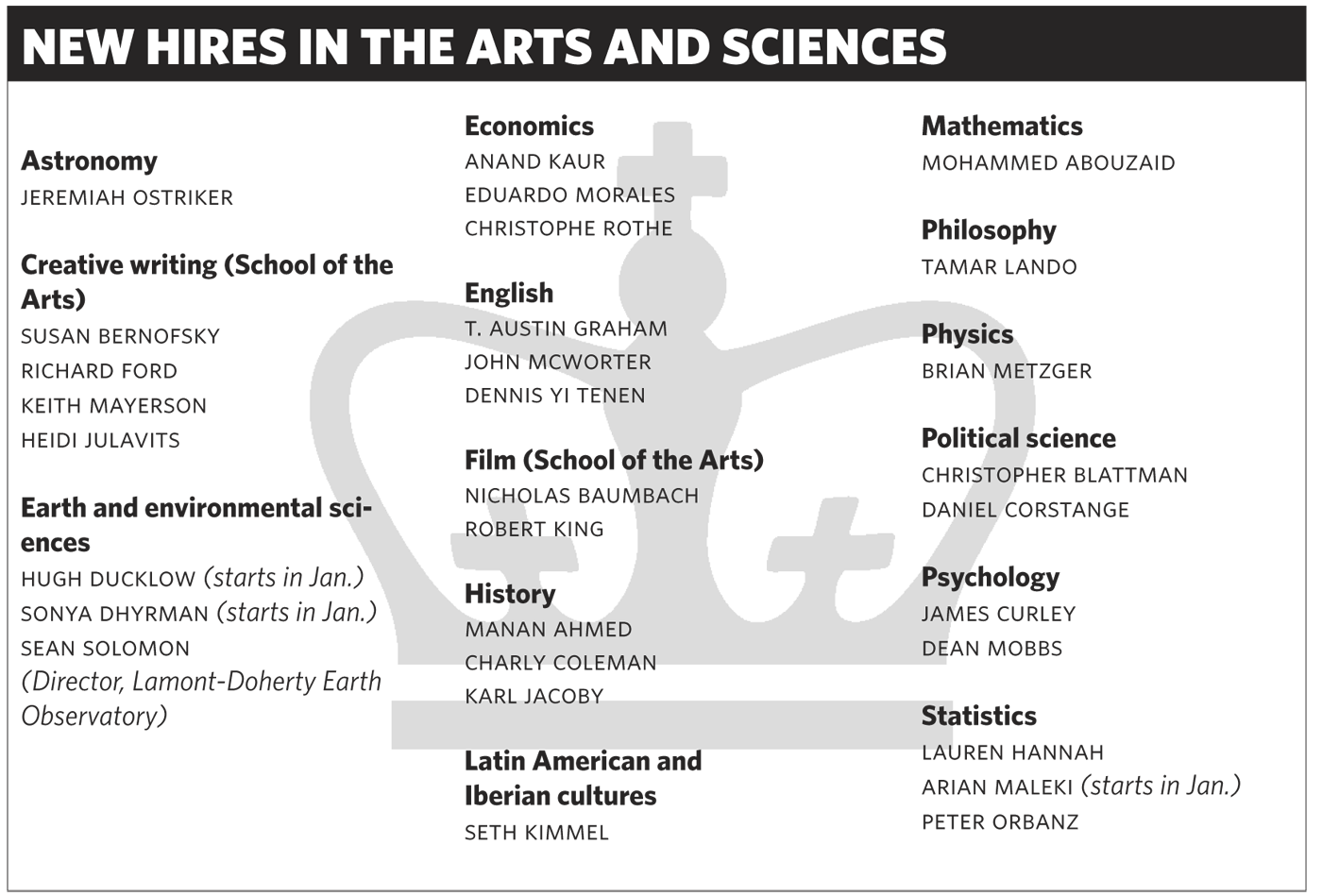 The School of the Arts' creative writing program hired four new professors, the most of any department or program. The earth and environmental sciences, economics, English, history, and statistics departments each had three new hires.

Columbia College Dean James Valentini, who wasn't yet dean when the 30 faculty search processes began in the summer of 2011, said that administrators decided which searches to approve on a case-by-case basis. The decisions were "not the result of a decision to emphasize one general area—humanities, social sciences, natural sciences—over another," he said in an email.

Seth Kimmel, CC '01, was hired to teach in the department of Latin American and Iberian cultures. He said that he decided to teach at Columbia because of its "challenging and stimulating environment."

"There are great students here, and a really engaging group of faculty," he said. "The students in my classes are really well prepared, interested, and motivated. They're excited to really delve into the texts we're reading—that's really been the greatest thing so far."

Tamar Lando, a new hire in the philosophy department, also emphasized the quality of the students at Columbia, as well as the support she receives from her department.

"I just felt the department here was a good fit. On my visit, people were very welcoming," she said. "It's been a very easy transition."

Another new hire, geophysicist Sean Solomon, is the new director of the Lamont-Doherty Earth Observatory. Solomon, who is also the principal investigator for the National Aeronautics and Space Administration's MESSENGER mission to Mercury, said in an email that "the opportunity to direct the Observatory was too compelling an invitation to pass up."

"In the three months I've been at Columbia and the Observatory, I've been immensely impressed with the intellectual breadth of the staff, the energy and creativity of the students, and the support of the administration for encouraging innovation and programmatic growth," he said. "The best part of every day is learning about the latest work of one or more of my colleagues."

According to the Office of Planning and Institutional Research, there were 854 full-time faculty members in the Faculty of Arts and Sciences as of last fall, up from 822 the previous year.

While many of the 30 new faculty members are acclimating themselves to Columbia this semester, some of them have already served as part-time professors. John McWhorter taught Contemporary Civilization and Introduction to Linguistics as an adjunct professor before taking a full-time job in the English department this semester.

"It's never dull, and the two classes might as well be different universes," McWhorter said in an email. "Just today, I finally got my academic books into my office—now all I need is an electric teapot and, I don't know, a guinea pig or something and I'll be completely settled in."

"Departments are just beginning the search for new faculty, and over the course of the year, some searches will change, others will be deferred, and yet others may be redirected," he said in an email. 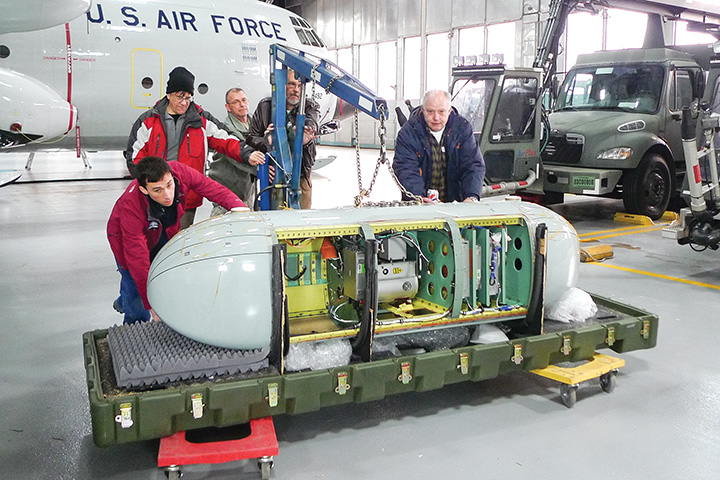 CU researchers develop tool to monitor ice sheets
By Steven Lau
Columbia researchers are going beyond just the tip of the iceberg.

Researchers at the Lamont-Doherty Earth Observatory are developing a tool that will help scientists better understand how polar ice sheets are shifting.

The IcePod, an eight-foot-long fiberglass capsule that houses a suite of sensors, is about a year away from being deployed to Antarctica and Greenland for full use, said Lamont-Doherty senior researcher Robin Bell, one of the lead scientists behind the project.

The IcePod sets itself apart from other tools used to study ice sheets primarily because it can collect data without requiring researchers to be in the field. It is designed to hang off of the rear door of a Lockheed LC-130 military aircraft so that, as the plane flies over polar regions, the pod's sensors can gather data about the structure, composition, and temperature of ice sheets.

Last week, the IcePod project team met with the New York Air National Guard's 109th Airlift Wing in Schenectady, N.Y. to test the pod in the air for just the second time.

"It's been very exciting to finally see it in the air," Bell said. "We've been talking about it so long it had kind of become, Is this ever going to happen?'"

Now that the IcePod has been tested in the air twice on a small scale, the team of scientists and the 109th Airlift Wing will travel with the pod to Greenland twice: first in April for 10 days of testing, and again in July to review any remaining issues.

The team may also travel to Antarctica for a final round of testing near the end of this year, although that trip is not yet set. Either way, the project is on track to be ready for real data collection next year, the researchers said.

"It's fantastically satisfying. Since Robin and I put the proposal together, it's been about three years," Nick Frearson, the project's lead engineer and a senior research associate at Lamont-Doherty, said. "We're very pleased to see it start coming together, and the University has a reasonable stake in it, so it's nice to see it come out."

Bell and Frearson came up with the original concept for the IcePod more than three years ago after taking part in another study of ice sheets, Antarctica's Gamburtsev Province Project.

Since receiving a grant for more than $4 million from the National Science Foundation in May 2010—to which the University added about another $2 million—the team of researchers has worked to turn its innovative design into a reality.

"By looking at the slopes that the ice is flowing over, you can understand how much ice is going to move from the land into the sea," Frearson said. "The outcome of our work will partially be used to contribute to the study of the sea level rise and getting a handle on how fast that is happening."

Frearson said that the data collected is then analyzed and used to produce three-dimensional computer models of the ice sheets and bedrock underneath and to make predictions about how changes in the ice sheets will affect other environmental issues.

The system is designed so that the Air National Guard can operate the IcePod without the assistance of scientists during standard missions to the Arctic and Antarctic. Major Joshua Hicks, the 109th Airlift Wing's program manager for IcePod, said that the device can be attached to any of the Guard's LC-130s as it flies missions over the polar ice sheets. That means the IcePod research can piggyback on other projects, Frearson said.

"The aircrew would essentially need to install the pod and, in an opportune mission, just press the start button and allow the sensors to collect data," Hicks said. "There's nothing else that's in the Air National Guard that allows for this roll-on, roll-off capability."

The IcePod contains several instruments, including a scanning laser, a high-resolution visual camera, an infrared camera, and two types of radar. Data from these instruments is intended to give scientists new insights into the external and internal structure of ice sheets.

"Temperature surface mapping of glaciers has virtually not been done, so that's going to be a huge new body of data," Scott Brown, a senior research associate on the project, said.

Beyond the actual gathering of data, the IcePod project is also focused on informing the Columbia community about the issue of climate change and how science, technology, engineering, and math are vital to understanding the environment.

"We have projects that range from just general engaging the community and making the polar regions a little bit more accessible to them on down to developing actual curriculum pieces around some of the geophysical data sets we'll be collecting," Margie Turrin, the project's education coordinator, said.

Hudson Water Improving, Researchers Say
By Elizabeth Whitman
The Hudson River is not as dirty as you might think, according to research by the environmental organization Riverkeeper and Columbia University's Lamont-Doherty Earth Observatory.
...
Next
ADVERTISEMENT
From The Blog