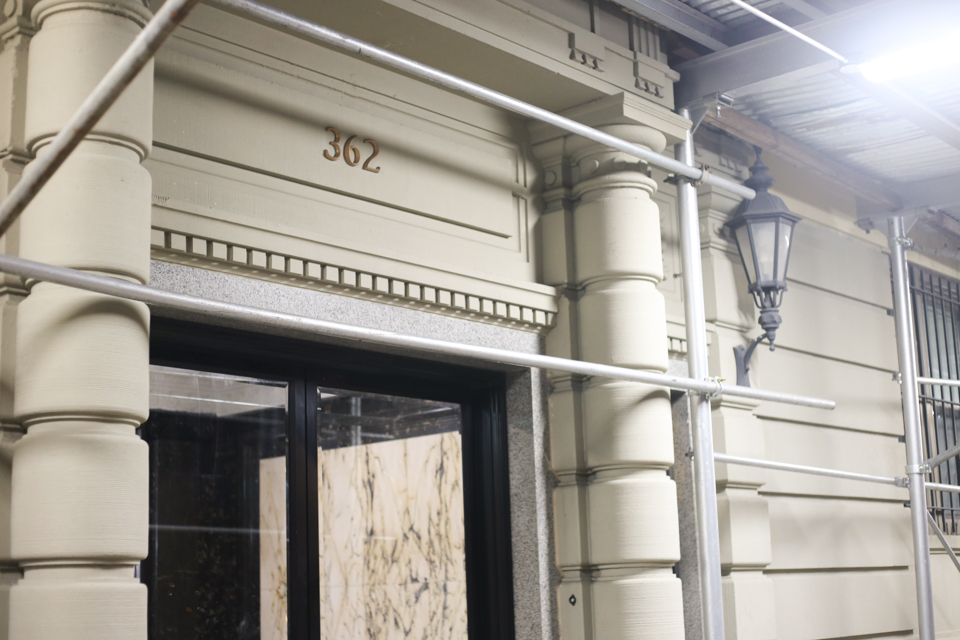 Housing registration timeline
By Lina Karim
With canceled classes and postponed exams,, many deadlines are being altered, but housing registration waits for no one. If you are planning on living on campus this year, make sure to keep the following deadlines in mind, so you do not lose your guaranteed housing.
... 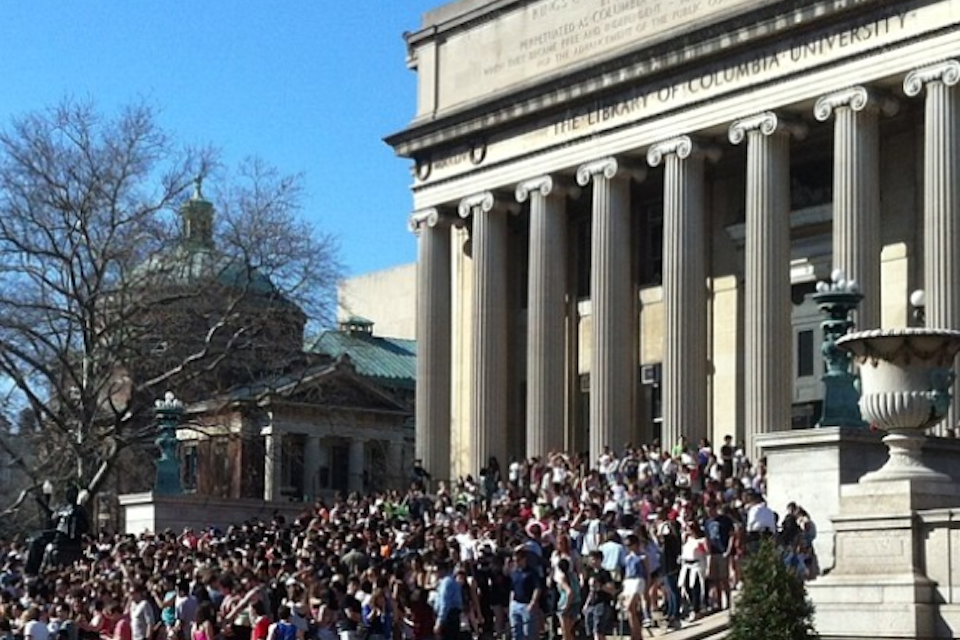 Bacchanal basics: The ideal Bacchanal timeline
By Huber Gonzalez
If you’re getting ready for some Bacchanal antics, you may want to figure out your game plan before you start turning up on Saturday. There’s a ton of different ways to do Bacchanal, but if you’re planning on going all out, be sure you know the general course of events that happen the day of.
... 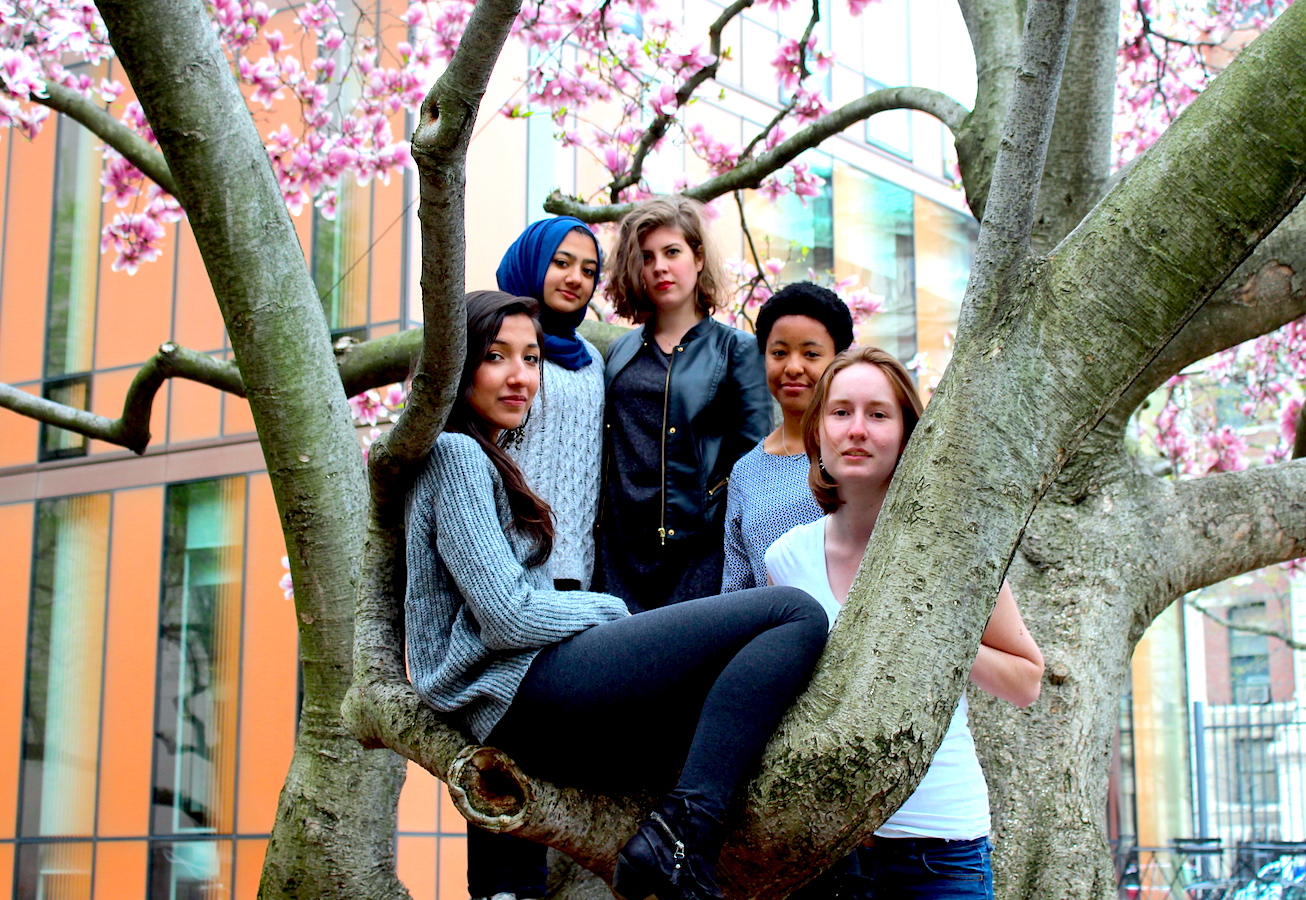 The mystical magic of NSOP friendships
By Aisha Hasan, Allison Emmet, Alana Petett, Annika Freudenberger, and Annabel Torres
I was recently approached by a Spectrum staff member who wanted to know if I knew anyone who had remained friends with their NSOP group. Much to her surprise, I told her that I actually was still friends with the group I had formed during NSOP. My NSOP group and I eventually agreed to write this piece as a tribute to our wild NYC adventures. ?
...

A timeline of Columbia football
By Sophia Hotung

ORIENTATION 2011: What You Missed Last Year
By Leah Greenbaum 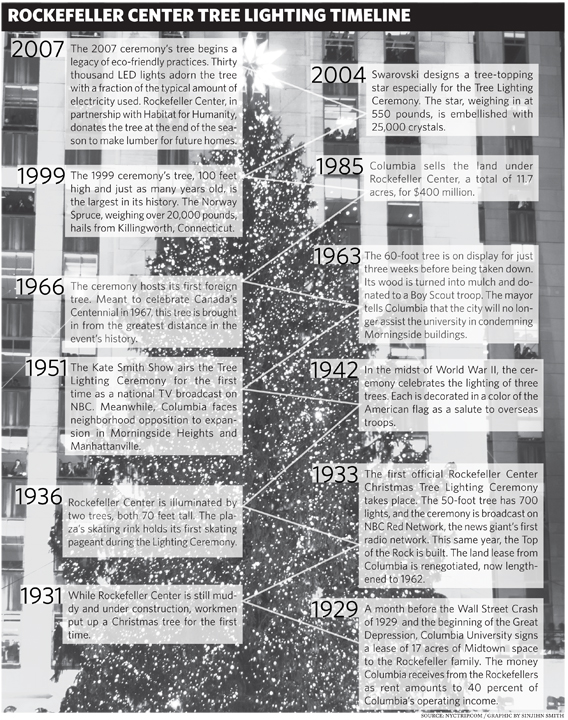 Burning the candle at both ends
By Emma Finder
Columbia University and Rockefeller Center could not be much more different in terms of what their purposes are. But, without a lease from the University in the early 20th century, Rockefeller Center may not have become the entertainment and cultural landmark that it is today. As this weekend's lead takes a look at the appeal of what Rockefeller Center can offer during the holidays, it's important to look back on the history of the landmark.

September 1929: A month before the Wall Street Crash of 1929 and the beginning of the Great Depression, Columbia University signs a lease of 17 acres of Midtown space to the Rockefeller family. The money Columbia receives from the Rockefellers as rent amounts to 40 percent of Columbia's operating income.

1931: While Rockefeller Center is still under construction, workers put up a Christmas tree for the first time.

1933: The first official Rockefeller Center Christmas Tree Lighting Ceremony takes place. The 50-foot tree has 700 lights, and the ceremony is broadcast on NBC Red Network, the news giant's first radio network. This same year, the Top of the Rock is built. The land lease from Columbia is renegotiated, now lengthened to 1962.

1936: Rockefeller Center is illuminated by two trees, both 70 feet tall. The plaza's skating rink holds its first skating pageant during the Lighting Ceremony.

1942: In the midst of World War II, the ceremony celebrates the lighting of three trees. Each is decorated in a color of the American flag as a salute to overseas troops.

1951: The Kate Smith Show airs the Tree Lighting Ceremony for the first time as a national TV broadcast on NBC. Meanwhile, Columbia faces neighborhood opposition to expansion in Morningside Heights and Manhattanville.

1963: The 60-foot tree is on display for just three weeks before being taken down. Its wood is turned into mulch and donated to a Boy Scout troop. The mayor tells Columbia that the city will no longer assist the university in condemning Morningside buildings.

1966: The ceremony hosts its first foreign tree. Meant to celebrate Canada's Centennial in 1967, this tree is brought in from the greatest distance in the event's history.

1999: The 1999 ceremony's tree, 100 feet high and just as many years old, is the largest in its history. The Norway Spruce, weighing over 20,000 pounds, hails from Killingworth, Connecticut.

2004: Swarovski designs a tree-topping star especially for the Tree Lighting Ceremony. The star, weighing in at 550 pounds, is embellished with 25,000 crystals.

2007: The 2007 ceremony's tree begins a legacy of eco-friendly practices. Thirty thousand LED lights adorn the tree with a fraction of the typical amount of electricity used. Rockefeller Center, in partnership with Habitat for Humanity, donates the tree at the end of the season to make lumber for future homes.
...

Show us your new Facebook Timelines
By Sara Garner 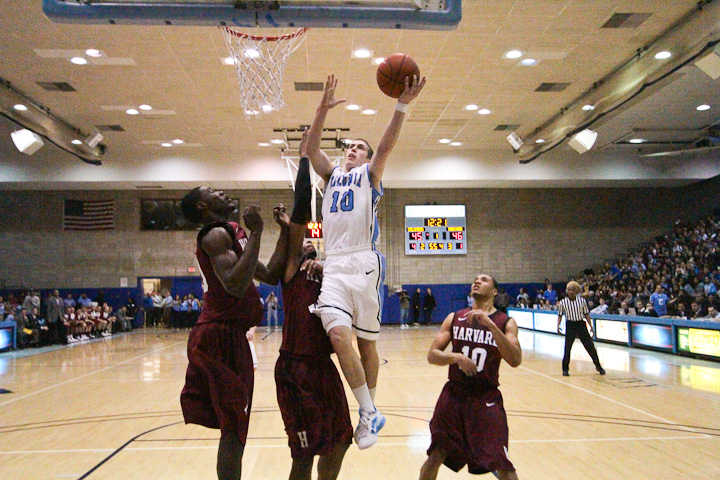 Men's basketball: Remembering the 2011-12 season
By Myles Simmons
The Lions' nonconference schedule in 2011-2012 was a comeback tale. After losing star point guard Noruwa Agho to a season-ending knee injury in the team's home opener against Furman, the Lions wound up losing their first four games of the year. But after that, Columbia pulled together to win seven in a row before dropping a game to Marist in late December. The Light Blue won its last four nonconference contests, though, and went into the Ivy season with an 11-5 record. 1/13 Penn -- L 66-64 Columbia had a slim lead at halftime, but it slipped away in the team's first Ivy game. The Lions were down by eight with around 1:30 left to play but their comeback came up short. 1/14 Princeton -- L 62-58 The Lions suffered déja vu, as they again couldn't finish off a late rally. Columbia led 24-23 at halftime but a second-half 11-0 Tigers' run put them in control. 1/21 Cornell -- W 61-56 The Light Blue led the entire way, and won its first Ivy game. Mark Cisco set a Levien Gym record with 20 rebounds in the victory. 1/28 at Cornell -- L 65-60 Cornell flipped the script on the Lions in Ithaca, handing them a five-point defeat. Columbia was down by 14 with 15 minutes to play and again couldn't finish the comeback. 2/3 at Dartmouth -- W 64-62 Mark Cisco hit a game-winning jump shot with just over 20 seconds left to give their Lions the 64-62 lead. Cisco led the way for the Lions with 18 points. 2/4 at Harvard -- L 57-52 The Lions hung tough but couldn't beat No. 23 Harvard. The Crimson's largest lead of the night was just eight points, and the Light Blue outscored Harvard's bench 16-1. 2/10 Brown -- W 86-60 Columbia tied a program record with 16 three-point shots made in its second Ivy win. Chris Crockett led the way with a career high 18 points, with six of them coming on three-balls. 2/11 Yale -- L 59-58 In perhaps the most heartbreaking loss of the year, the Lions led by 21 points midway through the second half but allowed Yale to come all the way back. The Lions failed to score in the game's final 4:20, missing two late free throws. 2/17 at Princeton -- L 77-66 The Lions let the Tigers gain control in the second half with a 14-3 run. The game was tied at 27 at the end of the first half, but the Lions couldn't hang with the Tigers in Princeton. 2/18 at Penn -- L 61-59 (OT) Penn won on an easy inbound layup with just 1.5 seconds left in overtime. Cisco had made it 54-53 with two free throws at the end of regulation, but Penn got a free throw too, sending the game into overtime. 2/24 at Yale -- L 75-67 Yale got out to a 15-point lead, and led 30-22 at halftime. The Lions tied the game twice in the second half, but could never take the lead and lost their fourth game in a row. 2/25 at Brown -- L 94-78 The Lions gave up a season high of 94 points in the blowout loss. Sean McGonagill—who didn't play in Columbia's win over Brown due to injury—led the Bears with 28 points, including five three-pointers. 3/2 Harvard -- L 77-70 (OT) With Jeremy Lin and Spike Lee in attendance, the Lions gave a sold-out crowd of 2,702 a show but couldn't pull out a win. Columbia tied the game at 62 with 33 seconds left in regulation, but their momentum fizzled out in overtime. 3/3 Dartmouth -- W 61-55 The Lions finished their season by breaking the six-game losing streak. Seniors Chris Crockett, Matt Johnson, Blaise Staab, and Steve Egee all got to start in their final game with the Light Blue. sports@columbiaspectator.com
...

Killing time
By Editorial Board
The administration announced yesterday that the gender-neutral housing policy will not be adopted for the upcoming academic year. In the first editorial of the year, the Editorial Board, after learning that members of the administration did not foresee any logistical issues with the implementation of gender neutral housing for the coming year, wrote that this would be the semester in which gender-neutral housing would be finalized. The administration was commended for its "quick movement on this issue—not only because of its political importance, but because it represents a move to make housing options more comfortable for the student body at large." Yesterday's announcement was thus both surprising and disheartening, both because of the reverberations that the action—or rather inaction—will have for students, and because of what it signifies regarding administrative timelines. This initiative had been widely supported both by students—who made their opinions known through the councils in December—and by the administration. The advantages of gender-neutral housing—increased choice and agency for the diverse student body on Columbia's campus—have already been articulated. That this would be a positive change does not seem to be the main issue. That such is not enough to incite movement on this policy is frustrating in and of itself. Equally if not more frustrating, however, is the reasoning given by the administration, which said that it wanted and needed to time to comprehensively include any changes to March's housing lottery, and that the proposed timeline had been "unrealistic." The original idea was conceived in the spring of 2009. That an announcement had first been expected at the end of January leads one to believe that people had been working on it for at least a semester. A potential pilot program for the 2011-2012 year is currently being examined. This means that it would first be adopted by a few dorms, taking still longer for the issue to reach the student body in its entirety. What students are left with, then, is a proposal that may or may not be adopted before it may or may not move on to affect all Columbia College and SEAS students. If time is being used as an excuse for inaction, it must also be noted that it is a reason that action is imperative. If a pilot program is adopted for 2011-2012, and if after that the administration decides to fully adopt it, gender-neutral housing will not actually be an option until 2012-2013. Only current first-years will be affected by the change, and then only for one year. The administration argues that these policies take time. Beyond the fact that time alone is not a logistical issue, there remains the reality that time is one thing that undergraduates don't have. Columbia students have four years here. Expectations that positive changes be made within a short period of time are based on the fact that that is all students have.
...

Commencement 2011: Four Years in Review
By Columbia Daily Spectator
Next
ADVERTISEMENT
From The Blog