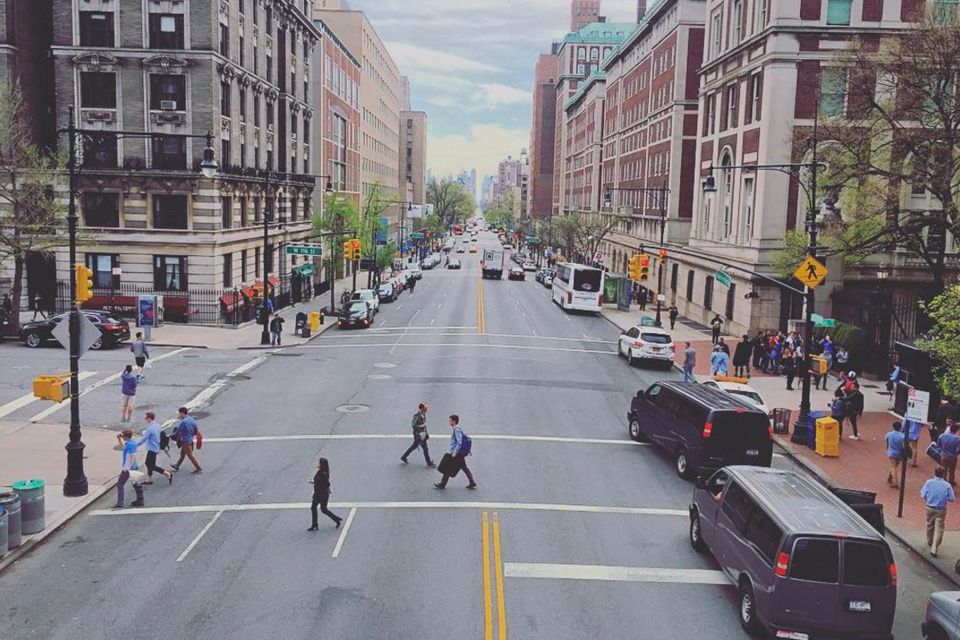 Riding around NYC: Which public transportation should you use?
By Huber Gonzalez
There are many ways to get around New York City, and each of them has its own perks. As a college student, though, you’re going to have to figure out the cheapest and quickest way to get to your internship, dinner date, or whatever it is you kids do nowadays.
... 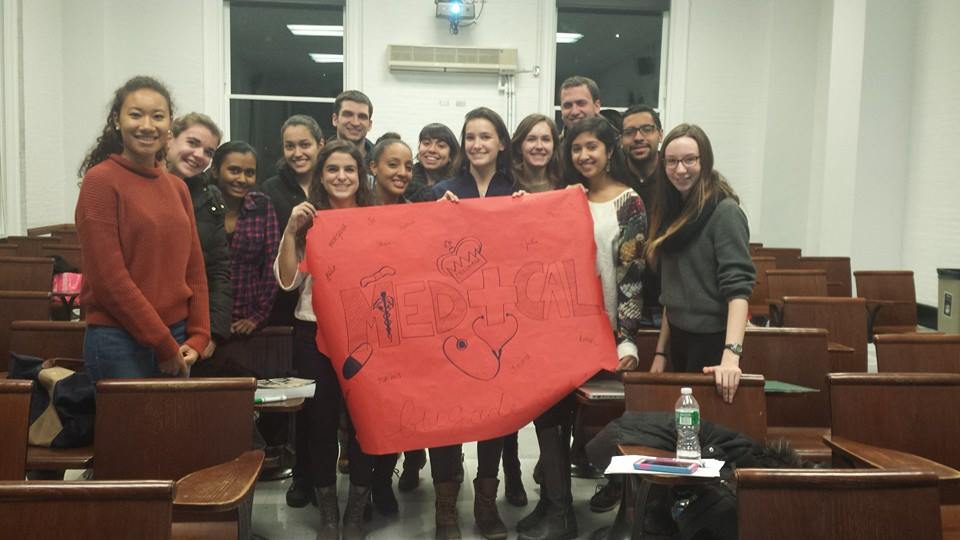 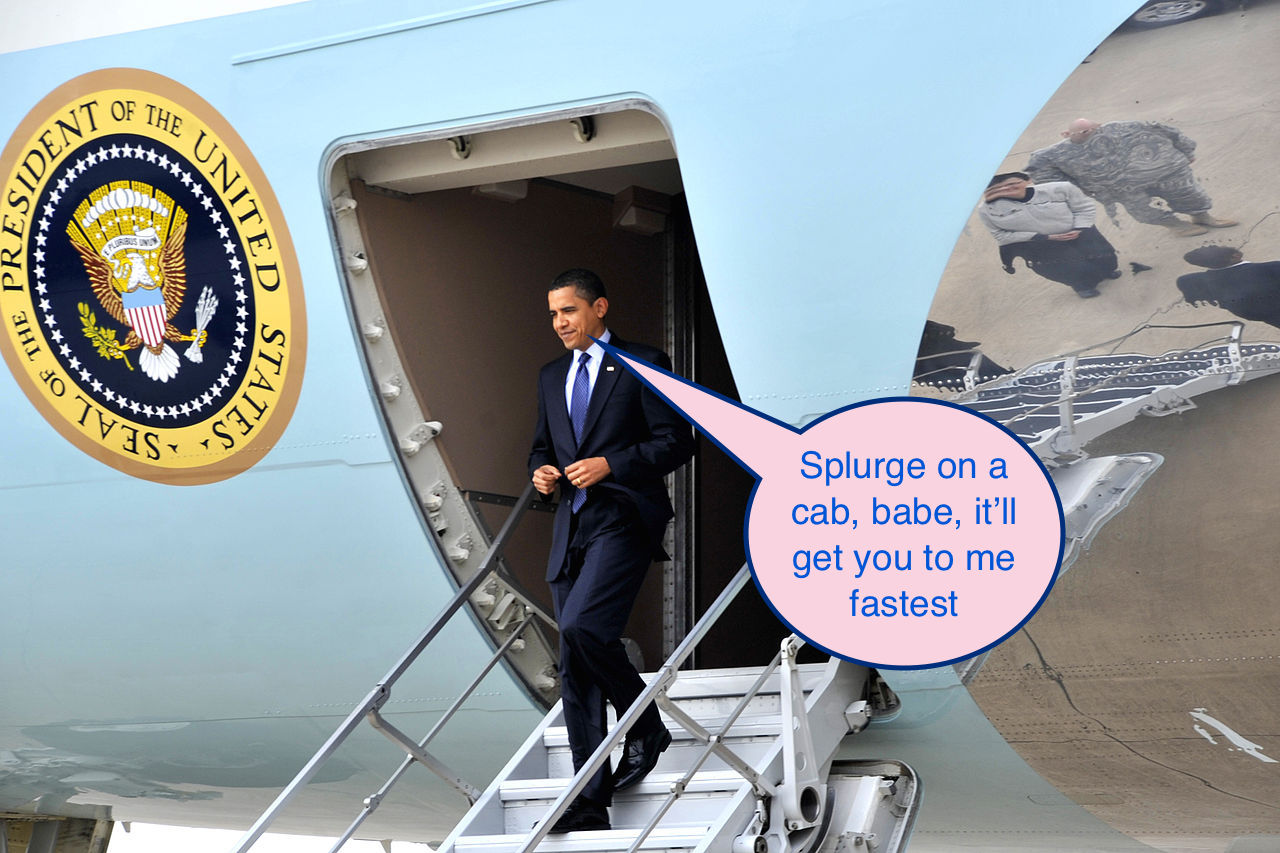 Ways to get from MoHi to LGA and JFK
By Veronica Grace Taleon
We know the feeling: Traveling is stressful. Tear-inducingly enough, the most daunting feat is the initial step of getting to the airport. To alleviate some of your travelling woes, Spectrum considers the pros and cons of going via cab versus bus to LaGuardia and JFK.
... 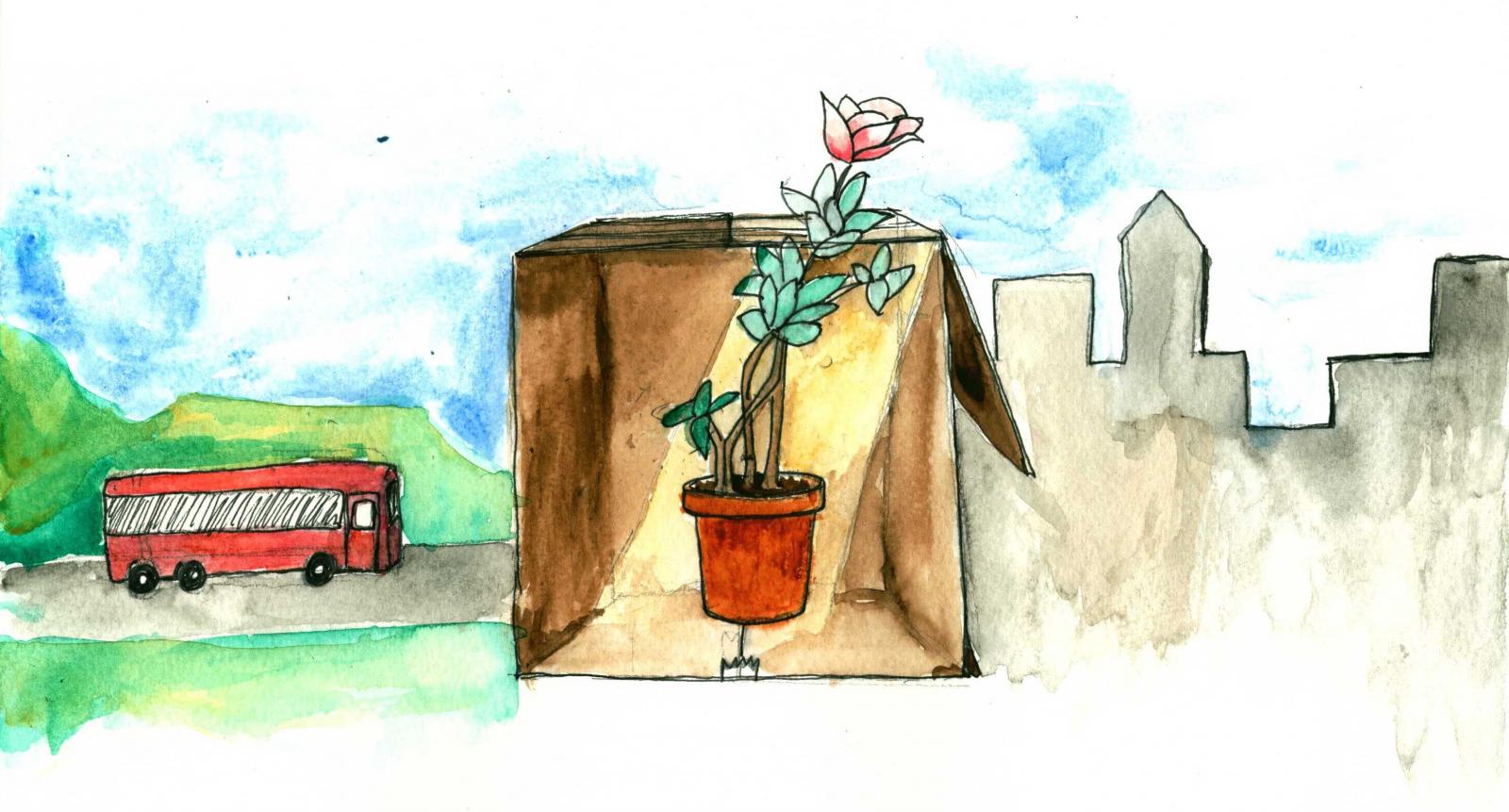 Constant Motion
By Beth Tolmach
It's a Monday morning in early February at the Peter Pan bus terminal in Springfield, Massachusetts.  I'm sitting on a hard plastic chair, waiting to go back to New York after spending the weekend in Amherst visiting some high school friends. New York is my home until I graduate in May, and my stomach churns knowing I'll soon return to streets littered with spilled food and black plastic bags swirling in the wind, where natural darkness competes with the sickly yellow glow of streetlamps and storefront lights.
... 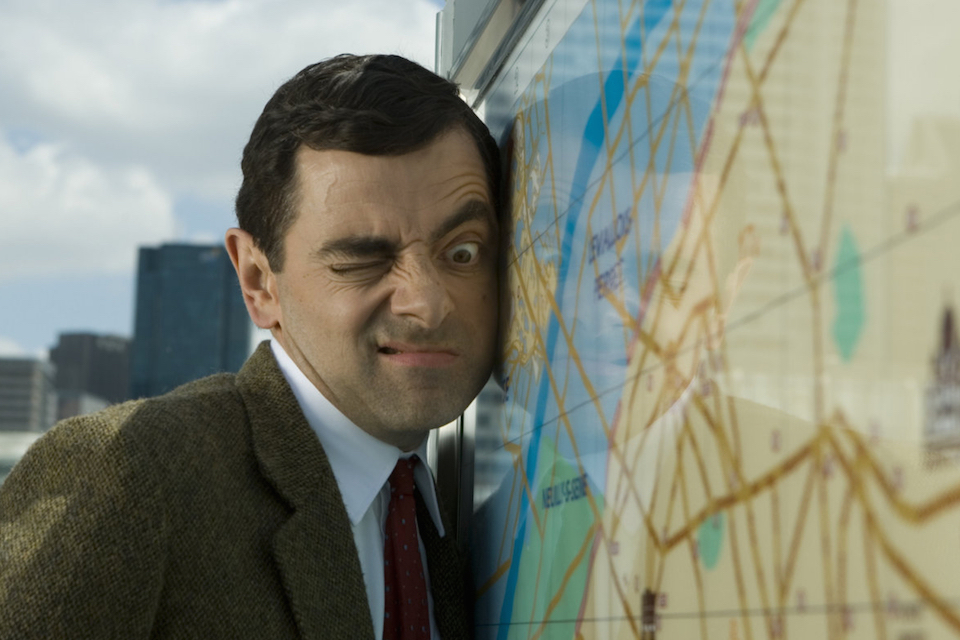 Quick and cheap transport to LaGuardia and JFK airports
By Sophia Hotung
Updated at 1.10 p.m. 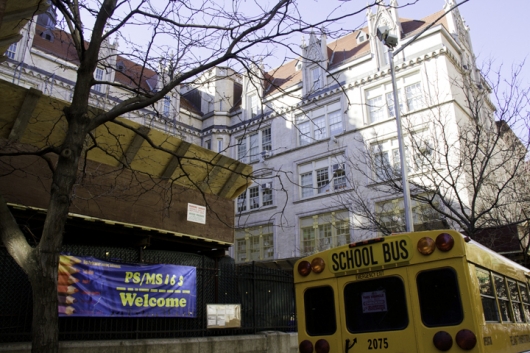 Bus drivers' strike disrupts school system
By Avantika Kumar
A strike by the city's largest school bus drivers' union forced 150,000 students—including some who go to school in the Morningside Heights area—to find another way to class.

The strike, which began Wednesday, is the union's first strike in over three decades, the New York Times reported. The union on strike, Local 1181 of the Amalgamated Transit Union, is pushing for employee protection provisions in their new contract, which increase job security for senior or more experienced bus drivers.

Mayor Michael Bloomberg is soliciting bids for 1,100 of the city's 7,700 bus routes in an effort to cut the city's spending on school busing, but will not include the protection provisions in new contracts with the winning bidders. According to Bloomberg, a recent court ruling made would make doing so illegal.

"We have told the unions in unequivocal terms: Do not walk out on our students," Bloomberg said in a statement. "A strike would be not only unfair to children and families, it would be totally misguided—because the City cannot legally offer what the unions are demanding."

But the union has a different interpretation of the court ruling, and has said that inexperienced drivers are less safe.

In order to help young New Yorkers get to class, city schools have distributed temporary MetroCards for subways and buses to some families, while reimbursing travel costs for others. In addition, schools will not penalize students who arrive up to two hours late, and strike-related absences will not affect a student's attendance record.

Even with these measures, Bloomberg said the strike would "necessarily jeopardize the education and safety of the more than 150,000 students who take school buses every single day, in a year when our students have already missed a week or more of school because of Hurricane Sandy." Many special education students are among those bused.

But some parents say the strikers are justified. Sara Catalinotto, member of Parents to Improve School Transportation and a parent of a student who uses the bus system, said experienced drivers, due to their road sense and understanding of students' needs, deserve the protection provisions.

"It's the mayor who's being stubborn, as far as we're concerned," she said. "It's the people who work on the bus who should get respect."

Catalinotto added that she felt the strike would stop as soon as Bloomberg recognized the need to include a provision to protect drivers' jobs in future contracts for bus routes and continue the practice of basing hiring decisions on seniority, which she feels is legal.

At P.S. 165 on 109th Street between Broadway and Amsterdam Avenue, parents said Wednesday afternoon that they saw both sides of the issue.

"They have a right to strike," said Juan Pablo Jiménez-Caicedo, a Columbia Spanish lecturer, who was walking his two sons home in the light rain. "Bloomberg was really not working to come to a good settlement with them."

At the same time, he said, the strike hurts "a lot of families dealing with issues" like special education.

Parent Fatima Ortiz said the bus drivers were striking "because they want the city to do good by them, both for them and their families." However, she said, "it hurts the kids, too, so there should be a balance."

While there are usually three large school buses in front of P.S. 165 every day, only one smaller bus for special education students was parked outside. The driver of that bus, who asked not to be named, said she was a member of Teamsters Local 854, which was not on strike.

"We all support them," she said, referring to Local 1181, but "we can't strike, it's in the contract. Ours hasn't expired yet."

Colbert insults Stewart's rally in conference call
By Leah Greenbaum
Stephen Colbert, the Comedy Central icon, took a break from "trying to get totally cut" this weekend to speak to college journalists about his upcoming March to Keep Fear Alive. "I'm gonna try to be in a unitard for most of the rally. Beefcakes keep people in their seats," he said, promising participants a look at more than just great satire in the making at his rally in Washington, D.C., on Oct. 30. Colbert, who stayed in character as a bombastic right-wing pundit for most of the phone interview, said he was concerned that the "moderates" participating in Jon Stewart's Rally to Restore Sanity, which is taking place on the same day in the same location, might get out of line. "They might go sane with power. I'm certainly bringing guards. I might bring the Hell's Angels—it's worked before," he said, encouraging fellow fearmongers to bring security. Columbia students have the opportunity to participate in both rallies through the CU Rally Bus, which is shipping interested students to D.C. the day of the dueling marches. Colbert, who said that the conference call was his first time speaking to the media about the rally, added that he is baffled by the intent of Stewart's rally. "I just don't think it's possible to get excited about moderate behavior. It's a paradox I don't understand. What are you gonna get, extremely moderate?" he asked with an air of disgust. Instead, he encouraged students to dress up as something frightening. When asked what he fears the most in the world, Colbert answered that obviously he fears gay immigrant bears. "Canadians would be the short way of saying that," he said, demonstrating his character's deep-seated xenophobia, self-hating homophobia, and hatred of bears. But Colbert told a student journalist from New York University that college students ought to live in fear of the imminent future. "Graduating in this economic market would be the biggest thing I'd be afraid of right now. I'd slow that coursework down. Stretch those credits out," he said, perhaps somewhat seriously. Colbert asked students in the area to organize "caravans" to transport people to the National Mall and asked students living in the nation's capital to let their friends crash over Halloween weekend. "And they might actually stay afterwards and eat all your food and drink all your beer, and that would be terrifying," he said, adding that students should keep the fear going by holding "fear parties" later that night. The March to Keep Fear Alive is primarily motivated by Colbert's character's fierce rivalry with the host of "The Daily Show," his former boss and the most famous satirical news anchor in the world. Colbert said that even if college students tend to be more liberal, they ought to come to his rally instead. "Going to Jon Stewart's rally is just like staying on campus and hanging out in the quad, chatting with other liberals. College is supposed to be about new experiences, so come to my rally and seek new experiences," he said, later adding that he will only know his rally is a success if Stewart admits he is "terrified." leah.greenbaum@columbiaspectator.com
...
ADVERTISEMENT
From The Blog