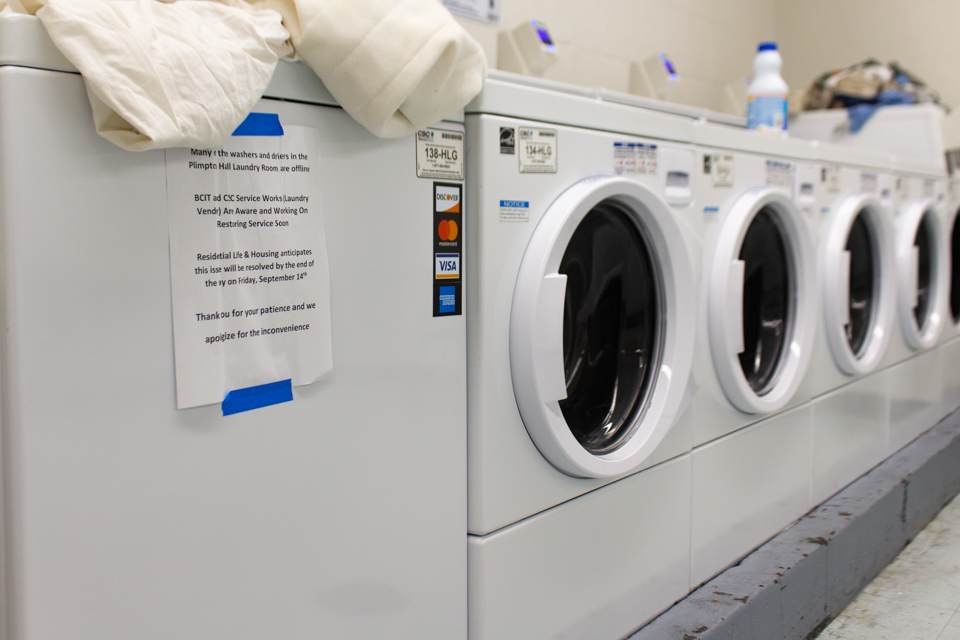 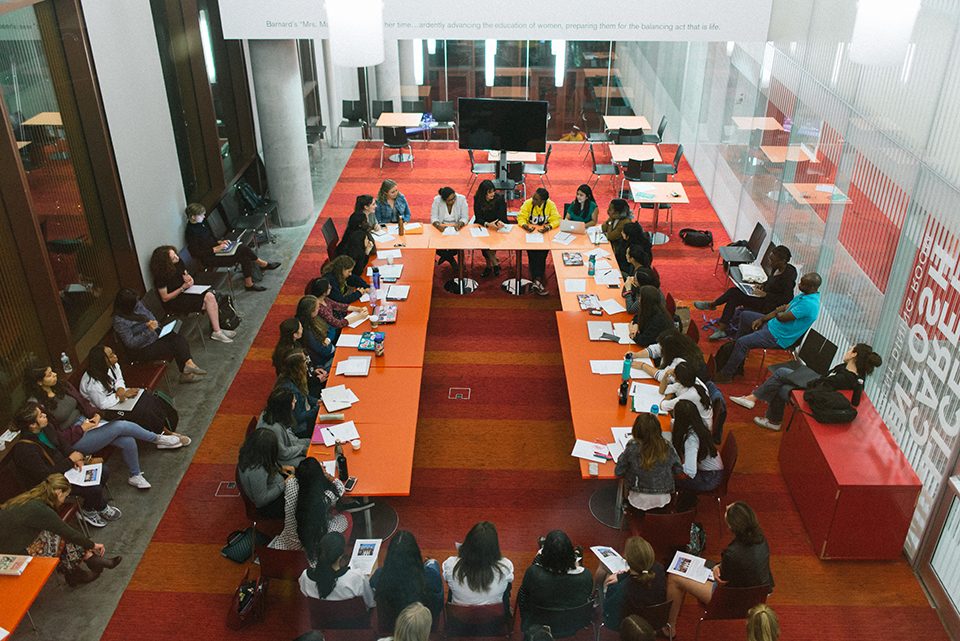 SGA elections results announced, nearly half of races uncontested
By Valentina Rojas-Posada
Barnard’s Student Government Association announced the results of this year’s council elections on Wednesday afternoon. This year, nearly half of the races were uncontested and dominated by incumbents.
... 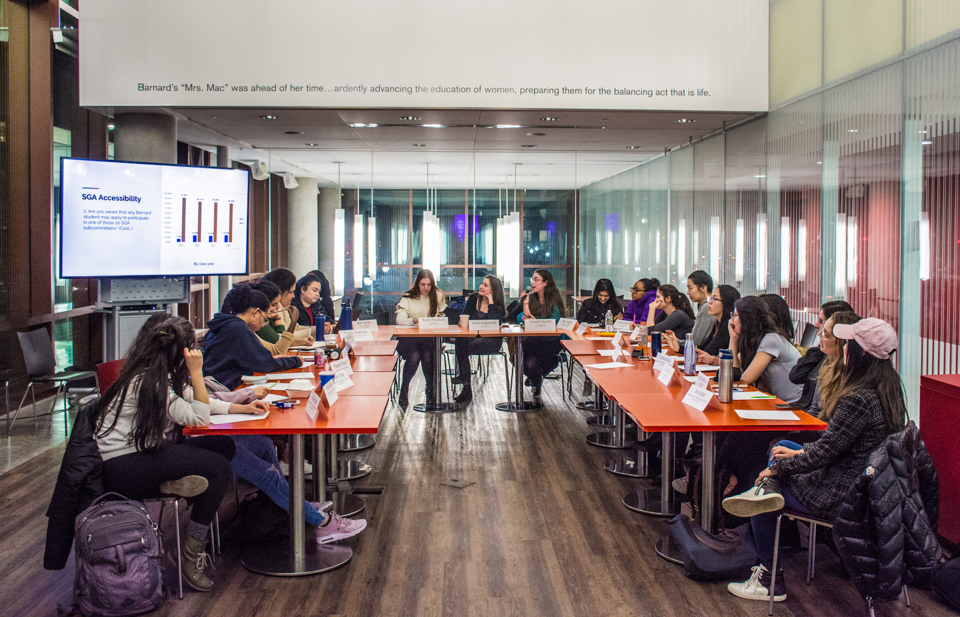 50 years on, BOSS calls for dedicated spaces, administrative support for students of color at SGA
By Heather Loepere
Members of the Barnard Organization of Soul Sisters and the Barnard Archives spoke to representatives about the history of BOSS and the continued need for dedicated space for black students on campus during a Student Government Association meeting on Monday.
... 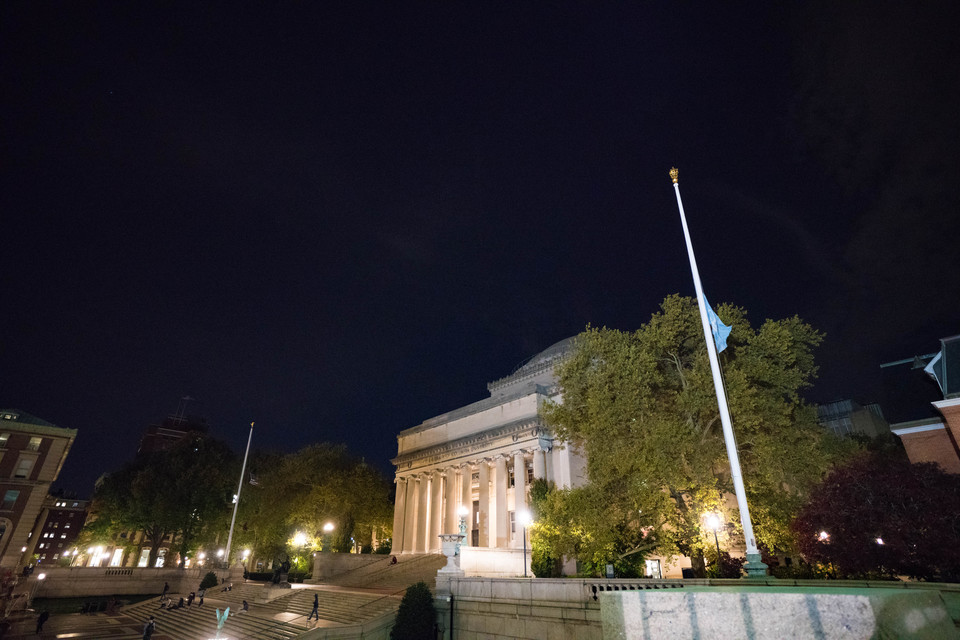 In the Wake of Anti-Semitism, A Silence to be Broken
By Blythe Drucker
I am a Jew, but I wouldn’t say I have a strong connection to Jewish life on campus. I have only been to Columbia/Barnard Hillel a few times, and I cannot say I have ever felt a pull or desire to return. I would not say this distance is uncomfortable; however, following the Tree of Life shooting, I’ve seen how insufficient the support for Jewish students beyond Jewish life has been on campus.
... 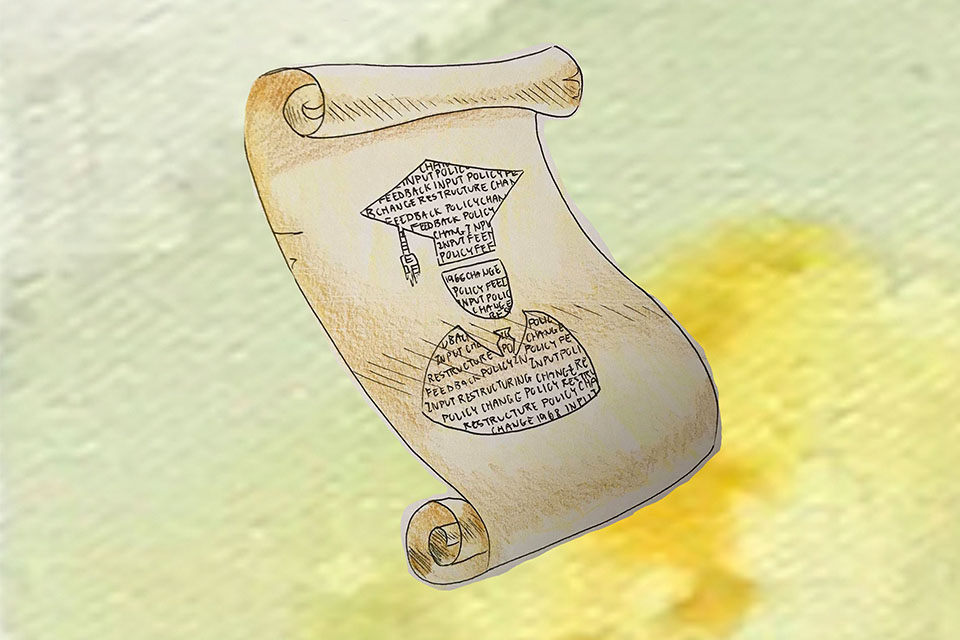 Discourse & Debate: Is the Columbia University Senate doing its job?
By Jimmy Quinn, Tova Ricardo, Jeremy Mack, Ufon Umanah, and Tiffany Dimm
Created in the wake of the 1968 protests, the University Senate was originally meant to restructure the University’s administrative and governing systems in order to effectively incorporate student and professorial input in university-wide policy decisions. Is the University Senate fulfilling its mandate?
... 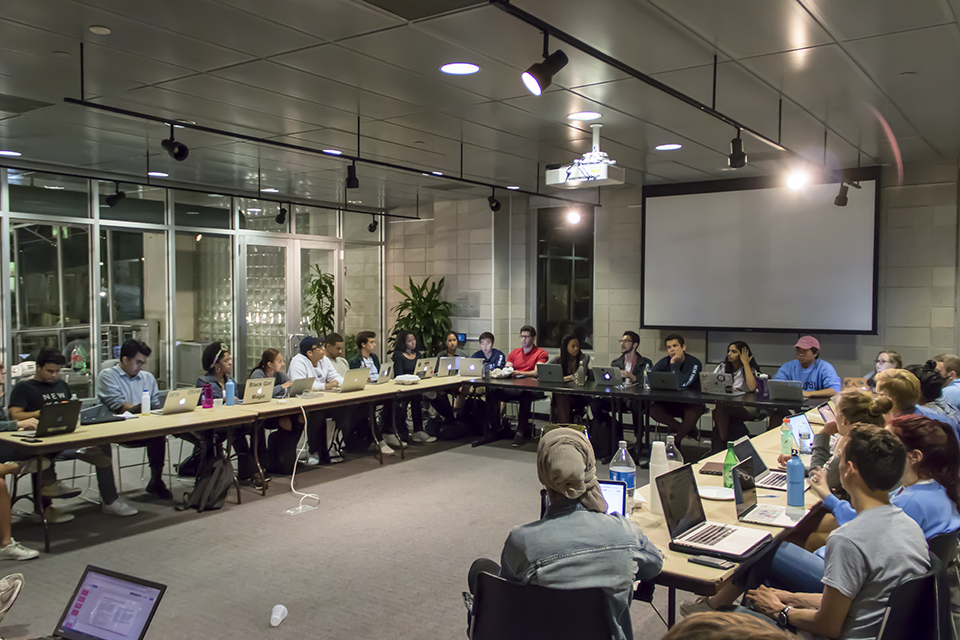 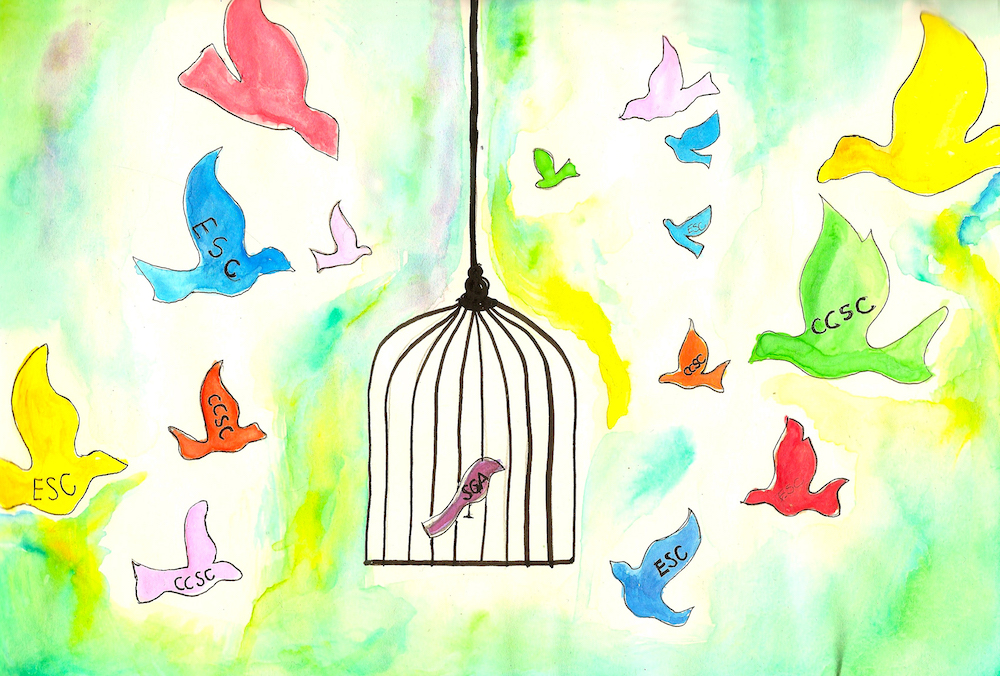 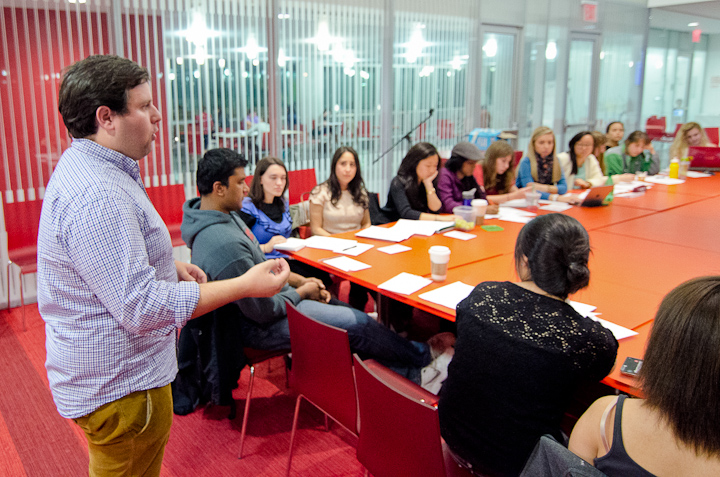 ABC joins SGB in rejecting Barnard fliering policy
By Lillian Chen
After the Student Governing Board's executive board voted on Sunday not to comply with Barnard's bureaucratic new fliering policy, the Activities Board at Columbia followed suit and club leaders voiced their support on Monday.

Beginning this semester, fliers, posters, and event notices on Barnard's campus must carry a stamp from the college's student life office. But at a meeting of Barnard's Student Government Association, chairs of the governing boards, which allocate funds for and advocate for student groups, called the policy an instance of administrative overreach.

"It adds on an additional layer of bureaucracy for student groups who are just trying to program their events and advertise so that as many people as possible from both Columbia and Barnard can come," ABC president Saketh Kalathur, CC '13, said.

Barnard's Office of Student Life did not respond to requests for comment on Monday.

The SGB executive board said in a statement that Barnard created this new requirement "to prevent the proliferation of non-student related flyers on campus and to actively prevent the occurrence of 'bias incidents' in violation of the university's Community Principles Initiative." But SGB chair David Fine, CC '13 and a Spectator sports columnist, described the policy on Sunday as a "case of good intentions executed very, very wrongly."

SGB's executive board decision will only come into effect if the general body votes in favor of noncompliance at SGB's town hall in December, but ABC's decision is effective immediately, a move that Kalathur hopes will force the administration to act quickly.

"Our hope is not that student group leaders will need to spend the rest of the year breaking Barnard's rules," Kalathur said on Monday. "Our hope is that this will send a message to Barnard about how serious we are about protecting the interests of our groups and how serious we are about making sure that our voices are heard before any changes occur."

SGB representative Mel Meder, BC '14, said on Sunday that the restrictions on fliering have alienated Barnard students.

"I'm really disappointed to see a policy that discourages groups from posting on Barnard's campus," she said. "We had heard from some of our groups that this policy really did impede and prevent advertising on Barnard's campus, and that as a result they were missing out on a lot of Barnard participation at events and in terms of new members."

The policy is also inefficient, said Jackie Ho, CC '14 and CC/SEAS vice president of the Chinese Students Club, a group under ABC.

"Fliering at Barnard is already sort of slim because a lot of groups, if they don't have Barnard funding just don't feel the need to flier Barnard," she said. "With this sort of policy, I feel like there'd be definitely even less publicity for events and stuff on Barnard's campus, which is really unfortunate."

Kalathur said the main reason ABC voted for noncompliance was because "there was absolutely no communication whatsoever from the Barnard Office of Student Life to ABC."

Sarah Steinmann, BC '13 and the SGA VP of Student Activities, said at Monday's SGA meeting that she attended one meeting with administrators last spring to discuss changes to the fliering policy. However, they mainly discussed logistical changes, and Steinmann said she "had no idea this was coming."

Some SGA representatives said that they should not immediately dismiss the policy.

"This is not something that anybody here should decide, 'Let's throw the policy out,'" Aliza Hassine, BC '14 and junior class president, said at the meeting. "These are instances that happened on this campus that bothered people."

Fine said that the administration provided him with only one example of a bias incident in the last two years, posters by the all-male a cappella group the Kingsmen.

"The Kingsmen is not an SGB group but it was an incident that they brought up and an incident where I agree the fliers were inappropriate," Fine said. "At the same time, it's one incident with one group. I don't think that requires a response of requiring that every single student group's fliers be preapproved by the administration." The Kingsmen declined to comment.

"There has to be a large amount of bias incidents on this campus for them to mandate a preapproval of student speech on campus," Fine said in his presentation.

SGA president JungHee Hyun, BC '13, said that SGA met with administrators earlier in the semester and decided to take the rest of the semester as a "review period." Last week, SGA sent out a survey to its groups to get feedback about the new policy, and representatives plan to talk to administrators again after fall break.

"We understand the benefit of a trial period," Steinmann said after the meeting. "That doesn't mean we want the policy to stay as is. We want to do something that benefits the student body."

Barnard's Student Government Association has formed a committee to address the swine flu at Barnard, the Community Flu Assistance Committee.

Members of the ad hoc committee—called "community flu assistants"—will have a say in creating and changing emergency health rules at Barnard, as well as lending support to ill students. As Columbia students formed a labyrinthine line around Lerner Hall waiting for services at the Flu Shot Fair, Barnard figured out how to handle outbreaks. Dean Dorothy Denburg mentioned swine flu's presence at Barnard in a Sept. 24 e-mail sent to students titled, "IMPORTANT FLU UPDATE."

"We are beginning to see cases of H1N1 in the Barnard community," she wrote, before urging students to register all flu-like illnesses "right away" at www.barnard.edu/flu. And when logging into eBear—Barnard's SSOL—students are greeted with a small, benign pop-up, reminding them to call the swine flu hotline.

Barnard administrators, including Assistant Dean Jessica Nunez who works in the College Activities Office at Barnard, reportedly wanted more student involvement in discussions about the virus on campus, according to SGA President Katie Palillo, BC '10.

While the committee is entirely student-run, Nunez will serve in an advisory capacity, Palillo said.

Still, the structure of this committee is still up in the air, and no one has been been selected as committee chair. "Applications are still coming in," Palillo said, but it will likely be co-chaired by both a member of the SGA representative council and a non-SGA student.

"It makes sense to do something about it as long as the sick kids take initiative," Nicole Bagarella, BC '11, said, adding that student participation would depend on the policies enacted.

"I would consider doing it," Ariela Wenger, GS/JTS '13, said of potentially participating in the committee. She also said that the concept, at least on the onset, seemed to be a good one. "I think it could make sense if there are policy-related things that need to be addressed."

And avoidance is critical—at least when it comes to campus disease. Preventative awareness will be key for the committee. Priorities, SGA members said, would include publicizing information about the flu and vaccinations as well as setting up walk-in hours at Health Services.

As for the community flu assistants, they'll have to figure out how to live up to their titles. According to Palillo, the committee will be talking about how to best "ease the discomfort of students who are ill," though no one is offering to bring chicken soup to your door just yet.

Instead, Palillo said the committee would be looking to modify attendance requirements for classes that may penalize for absences, as well as taping lectures for sick students.

"I don't think it's unreasonable to expect changes [at Barnard] . in the presence of a flu that could affect so many students," Palillo said.

Though threatening to spread swine flu to your poli-sci professor may do the trick, too.

Some students have already come up with policy suggestions. "I do think there should be a general health policy, as opposed to a swine flu' policy," Mariya Mescheryakova, BC '12. "We need to make sure students aren't going to class sick. No one should be penalized if they come in with documentation from a doctor. Plenty of Barnard students risk their health by not addressing concerns" in a timely manner.

Managing workloads is another way to keep the immune system healthy and prevent illness, students pointed out. "It isn't the flu that's so bad, it's the weakened immune systems of students being pushed to the edge," Mescheryakova said. "Nothing is worse than lack of sleep and malnutrition for health."

"I think that students recognize that this situation, while not ideal, is one in which we can learn how to promote safe habits," Palillo said. 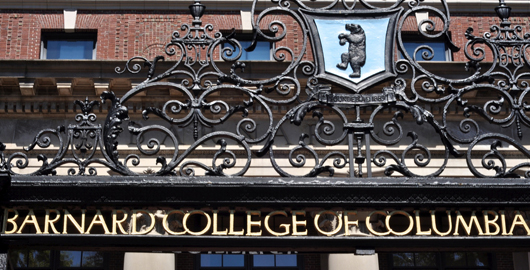