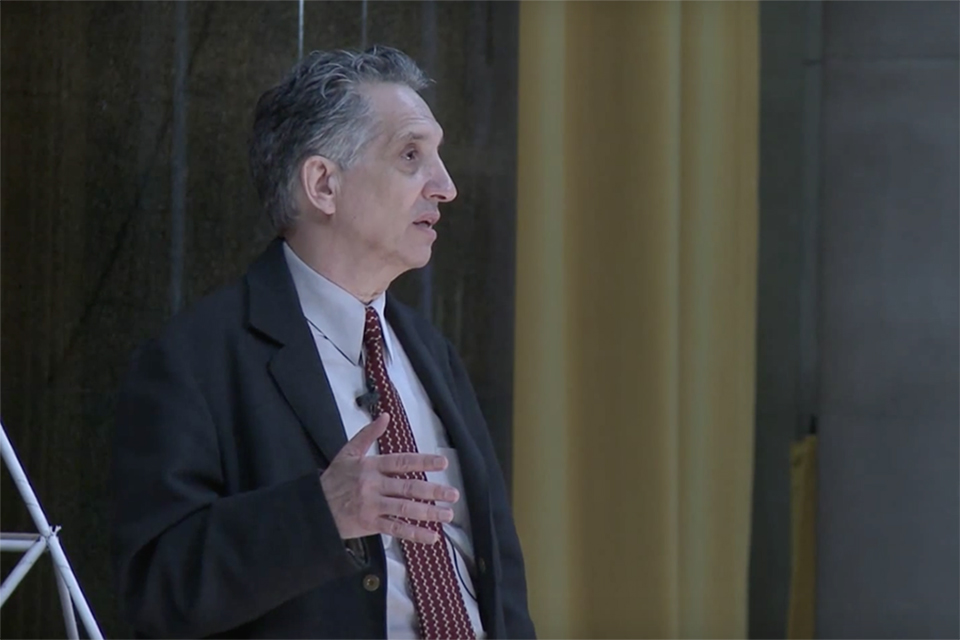 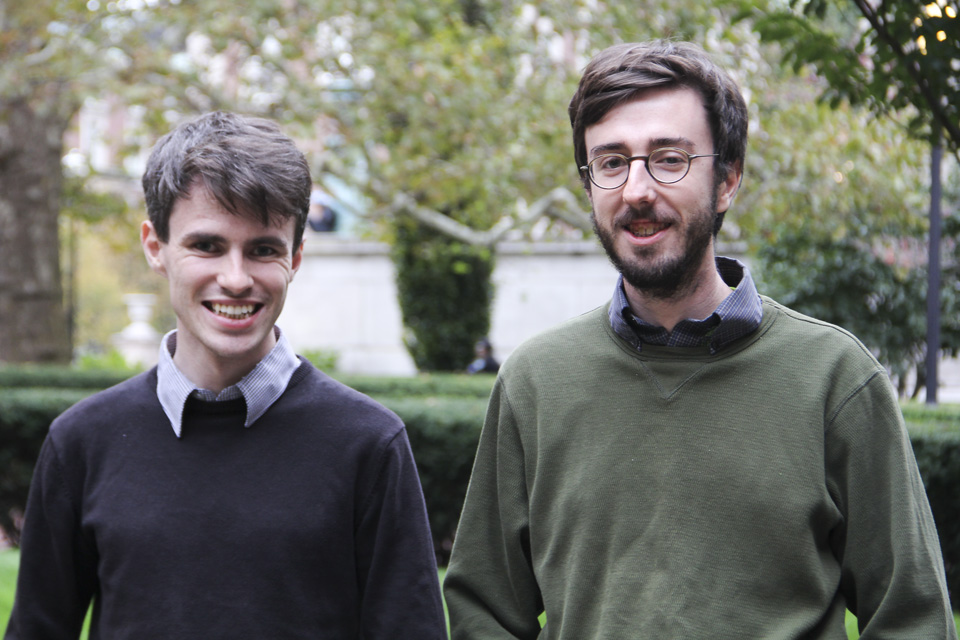 Early Music conference strives to preserve tradition in digital age
By Rachel Susser
In a collision of old and new, the Early Music in the Digital Domain presentation will explore how technology can increase our understanding of early music, some of which was composed nearly a millennium ago.
... 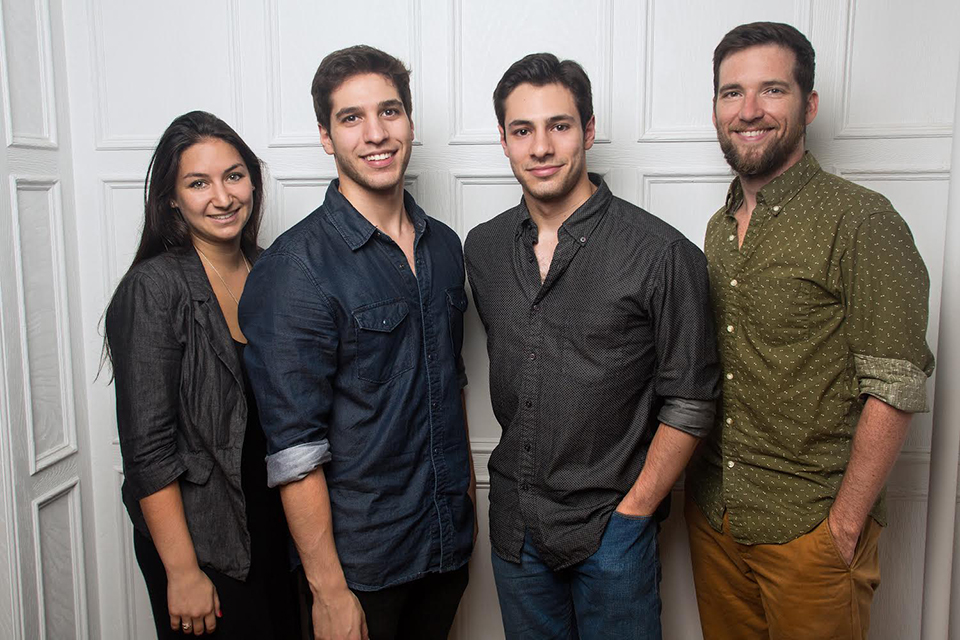 Over There' gives a human voice to Cold War politics
By Kally Patz
As the Berlin Wall comes tumbling down, so do national and personal ideologies in HERE Arts Center's newest production. 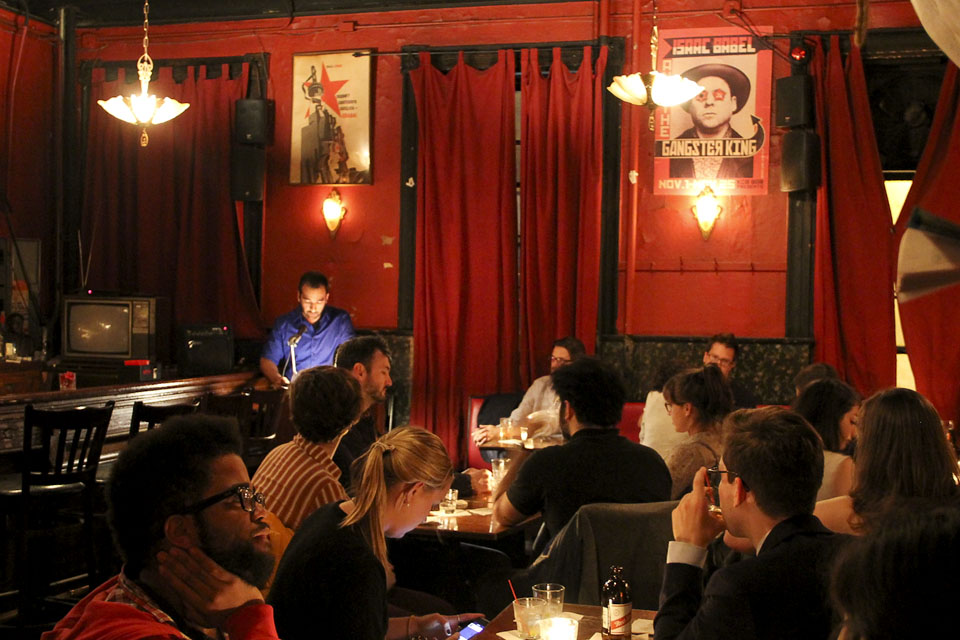 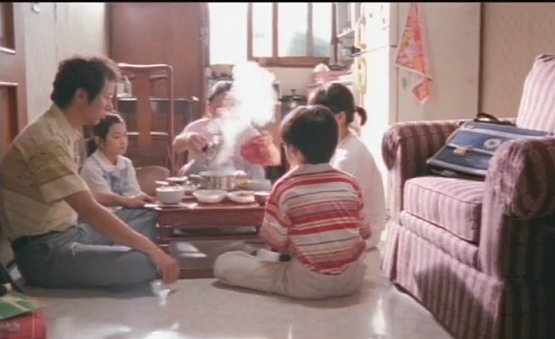 SoA students win filmmaking awards
By Winn Periyasamy
Last night was a big night for student filmmaking on campus as three Columbia University students were selected as regional finalists for the 39th Annual Student Academy Awards. Christoph Kuschnig, SoA'12, Bora Kim, SoA'11, and Mark Raso, SoA'12, were each honored yesterday during the Region Three Semifinals ceremony at the Academy Theater at Lighthouse International on 59th Street. Kuschnig's "Hatch," Kim's "The Recorder Exam," and Raso's "Under" were all screened in the Narrative Films category, followed by the awards announcements and a cocktail reception to celebrate the recipients' accomplishments. They beat out three other films from students from both Columbia and New York University. more Established in 1972 by the Academy of Motion Picture Arts and Sciences, the Student Academy Awards were created to help "support and encourage excellence in filmmaking at the collegiate level."  Each year, over five hundred college and university filmmakers from around the country submit their films for the chance to win gold, silver, and bronze medals, as well as corresponding cash prizes. Films are submitted by late March/early April and are divided into four categories: alternative, animation, documentary, narrative and foreign student film. Up to three films per category are eventually selected as finalists in each of the three regions. Additionally, a foreign film category was set up to recognize accomplishments in film from student filmmakers outside the United States. These winners then move onto the national level.  Past Student Academy Award Winners have included eventual Oscar winners and nominees such as Spike Lee, Pete Docter, Trey Parker, Bob Saget, John Lasseter, and Robert Zemekis. Last year alone, Columbia saw alumna Brigitte Liebowitz, SoA'10, win the Silver Medal in the narrative category. Kuschnig, Kim, and Raso's films will next be screened and considered for national finalist recognition in Los Angeles, California. Good luck and congratulations to the three.
... 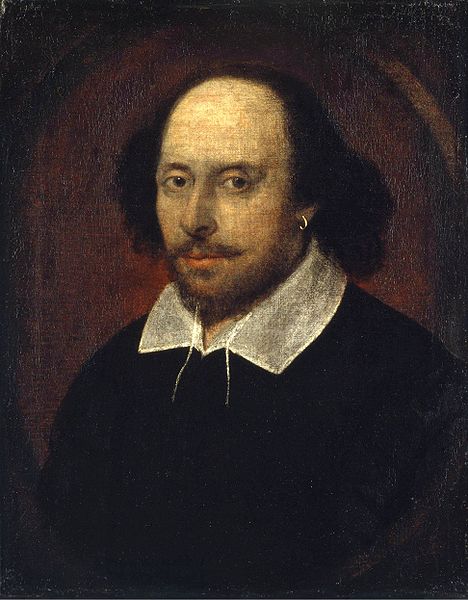 Breaking: Poet makes money
By Samantha Henderson
It's Thursday—finally. Moreover, tonight is Glass House Rocks in Lerner, starting at 9 p.m. Make it through those classes and head over! Read this: School of the Arts associate professor Tim Donnelly has won the Kingsley Tufts award—and a prize of $100,000—for his book of poetry, "The Cloud Corporation." [A&E] Know this: Love Google Docs? Well, unfortunately, Columbia's transition to Gmail won't include it. [News] Here's more: Michel Shapiro changes his tune and argues that archery is worthy of big-time sports coverage. [Sports] Cecilia Reyes seeks to tap into what it really means to be an immigrant at Columbia. [Opinion]
... 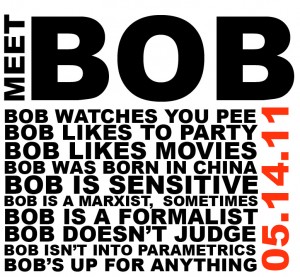 A public toilet behind Avery: Bob the Pavilion
By Adrienne Peñaloza
If you've been around campus lately, you might have spotted a white canopy floating behind Avery. Some reception with free food? An information tent for highschoolers on their college tour? Oh, no. It's a pavilion for a public, composting toilet. Meet Bob.more Bob the Pavilion (affectionately named for its "gentle undulation") is the brainchild of a team of architecture students who aimed to "recast a space of seclusion as open and engaged with the city." The pavilion stays puffy through fan-assisted ventilation of the composting toilet, which is to say, if Bob is undulating, it's probably because you're "going." Except that Facilities aborted the team's plan, citing concern for the potential stink, legality of the installation, and possibility of a leak. While the toilet is still there, it is for display purposes only.
... 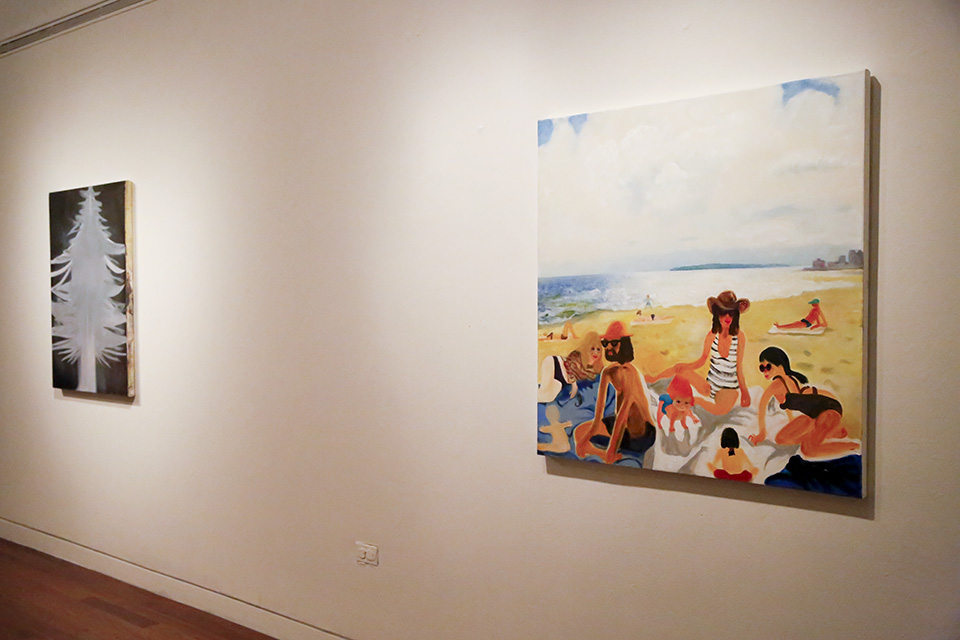 Pale Fire' brings together disparate parts to create satisfying whole
By Kayla Desroches
Fire and winter make an unusual but engaging pair in the LeRoy Neiman Gallery's newest exhibit.  "Pale Fire," the winter exhibition organized by MFA candidates in the School of the Arts, holds up to its paradoxical name with pieces evoking both the moodiness of winter and the vitality of summer in equal measure.
... 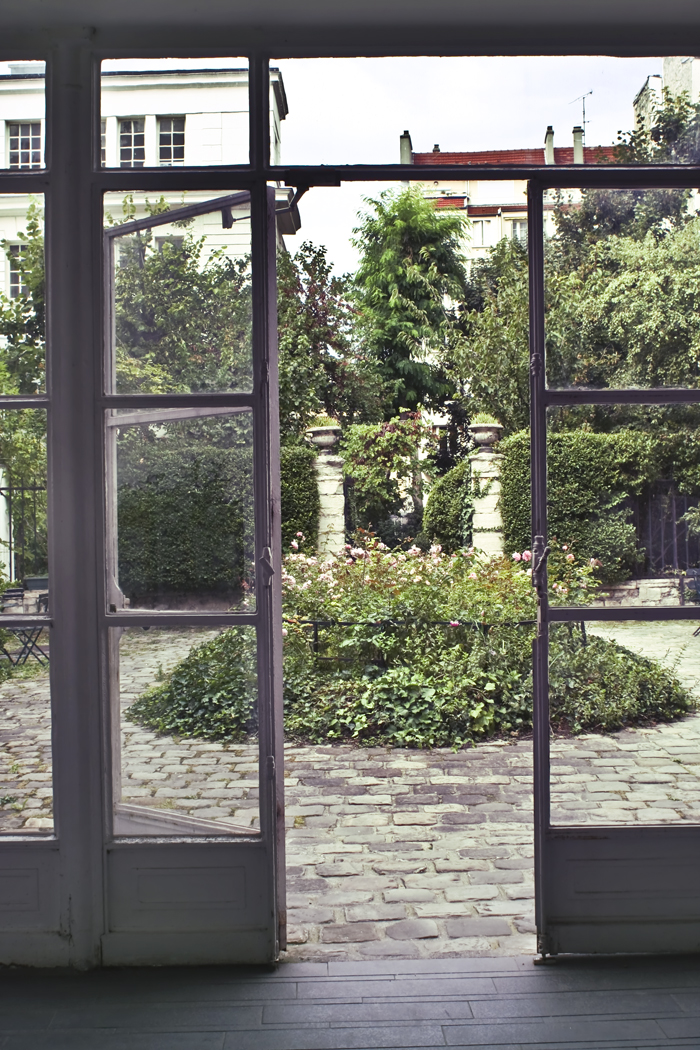 New SoA theater program heads abroad
By Victoria Fox
This summer, Columbia's theater enthusiasts can trade in the bright bulbs of Broadway marquees for the City of Light.

For the first time, Columbia's School of the Arts is offering a three-week course called "Contemporary French Theater and Performance" at Columbia's campus at Reid Hall in Paris. The program, whose applications are due March 1, is open to graduates and undergraduates from Columbia and Barnard, and is part of a larger selection of summer courses available from SoA. The course aims to expose students to the production of the contemporary theater scene in Paris, and is the first SoA abroad course to grant credit to undergraduates.

Since the program is targeted at students already situated in one of the world's best theater scenes, some may question the appeal of a program that pulls them away for the summer. Gideon Lester, a graduate theatre arts professor, designed the curriculum along with Yale Associate Professor Tom Sellar, and both teach the course.

Lester explained in an interview that the course should "appeal to anyone who's really interested in an international perspective," and said that the program welcomes students interested in international or European studies, alongside those focused on theatre studies. The aim of the program is to "introduce [students] to a really rich, and dynamic, and diverse theater culture, and France has one of the very best," Lester said.

Designed to be broad-based, the program will expose students to new, classic, and international performances in theater and dance, situated in both large and small venues. The course includes three seminars that meet twice a week, along with nine to 12 field trips to theaters and performances. In addition to readings, trips, and discussions, students will also hear from critics, directors, choreographers, and administrators active in contemporary French theater. Though it is recommended for day-to-day use, knowledge of French language is not required to participate in the program.

Lester also said that the production of theater in France is vastly different from that in the United States. The French government puts one percent of its overall budget into cultural productions, and this financial support allows artists to spend more time creating pieces and to produce more experimental works, and also reduces ticket prices, making performances more accessible to the public. A major focus of the course will be investigation of the ways that French government support shapes the powerful theater scene, as well as consideration of the potential drawbacks of such support.

SoA's international move in summer programming is a logical addition to its current collection of summer programs. Last year, 44 new summer arts courses were offered, drawing in 365 students. Most of this programming was centered in New York City, in addition to a few international, non-credit bearing ventures. In an interview, Alicia Stevens, the director of global programs at the School of the Arts, said, "That was our goal: Before we tackle the globe, let's start with some innovative programming here in New York." The addition of the theater program at Reid Hall marks SoA's first abroad course that can be taken for undergraduate credit. Students receive three points upon completion of the course.

SoA developed the program in collaboration with the Office of Global Programming, which handles all undergraduate study abroad and helps plan specific international programs for Columbia's different departments and schools. Stevens commented that "bringing our content to these existing structures" will be beneficial, as the study-abroad program at Reid Hall is well-established.

An information session on Wednesday brought out both undergraduate and graduate students from Columbia and Barnard. "I have never been to Paris before," said Qing Zhang, a first-year graduate student in stage management, "and French contemporary theater is quite new to me. I'm excited to try new things." 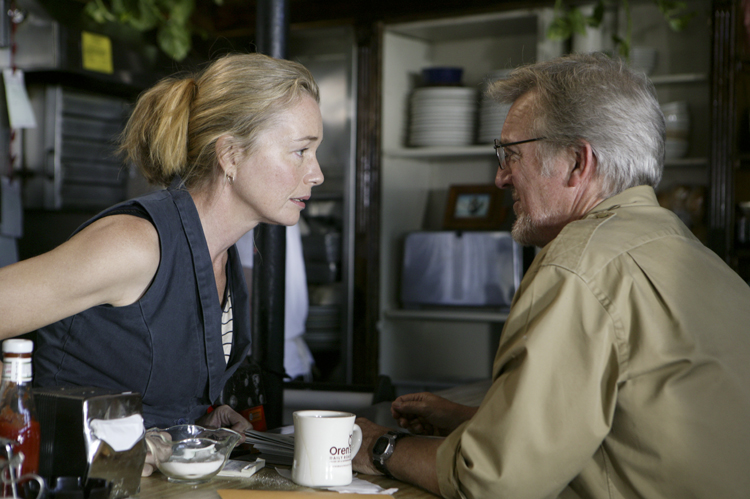 SoA prof. examines masculinity in film
By Rosie DuPont
"Sometimes," director and Columbia School of the Arts professor of professional practice Bette Gordon says, "it takes a woman to discover new perspectives on masculinity." In "Handsome Harry,"her most recent feature, Gordon does just that: She examines the lives of six Vietnam veterans as they struggle to define their masculinity in a world where military values—like conquest and dominance—no longer define what it means to be a man. "Handsome Harry" tells the story of Harry, a 52-year-old Vietnam veteran (Jamey Sheridan) who is, as Gordon puts it, "living a lie." An electrician with a passion for singing, Harry lives a quiet, small-town life, until his old Navy buddy, Tom Kelly (Steve Buscemi) calls him from his deathbed, desperate to clear his conscience about a terrible moment from their past. Tom's guilt resurrects Harry's own torment, and sets him off on a quest to visit his other friends from the war, in pursuit of the truth. "Handsome Harry" is a collaboration between two Columbia University School of the Arts professors–director Bette Gordon, best known for her features Variety (1984) and Luminous Motion (2000)–and writer Nick Proferes, directing professor at Columbia School of the Arts and experienced editor, cameraman, documentary director, producer and screenwriter. The collaboration proved successful."Handsome Harry" delivers a potent, character-driven story, which raises both emotional and social issues subtly. Gordon's use of enclosed spaces and tight dialogue create a palpably affecting psychological space, magnifying Harry's physical and emotional entrapment. Throughout his journey, we find him cornered: in a bedroom with another man's wife, on a golf course with a friend unwilling to get in the car and drive, and finally, alone, in a restaurant, unable to forgive himself for the pain in his past. Sheridan's sincerity and "every-man" appeal make his portrayal of Harry's guilt that much more gut wrenching. He is a sweet person, incapable of delivering himself from his own purgatory. As Gordon put it, "Harry can't forgive himself." Even if the audience wants to help, his fate lies in his own hands. Is there hope for a man like Harry? Though "Handsome Harry" features an older generation of men, it also raises pertinent questions about contemporary codes of masculinity­—especially about what it means to be a homosexual in the military. The struggles of characters in the film are undoubtedly relevant for homosexuals in the military today. Though definitions of masculinity have changed since the 70s, the "don't ask don't tell" policy still exists. "Handsome Harry," however indirectly, addresses what these individuals have to deal with. The cast, including Sheridan, Buscemi, Campbell Scott, John Savage, and Aidan Quinn, among others, delivers the cocktail of fragility and machismo Gordon and Proferes were aiming for. "Handsome Harry" is handsomely done. In "Handsome Harry," a woman did discover new perspectives on masculinity. Gordon delivers again.
...
Next
ADVERTISEMENT
From The Blog